Introduction
Optoma might have pioneered the Pico or pocket projector market, but lately it’s been 3M that’s been stealing most of the thunder – at least where the important matter of picture quality is concerned. Optoma, though, reckons that its new PK301 will see them challenging for the top of the pocket projector league table.

Optoma PK301 Design
It’s certainly dressed to thrill. Its tiny form – it’s just 120(w) x 70(d) x 30(h)mm – weighs just 235g, making it a genuine pocket projector rather than something that you’ll have to tuck into a briefcase. In fact, it’s notably smaller and lighter than even 3M’s recently reviewed 3M MP220.

It’s also rather attractive in its black, tactile finish, complete with pleasantly rounded top corners and a smart grille effect round the sides. 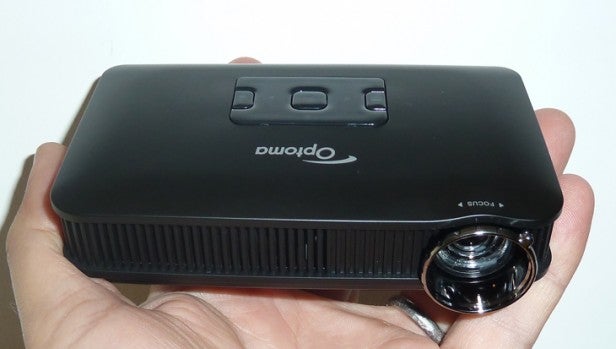 Welcome, too, is the little carry pouch that ships in the Optoma PK301 ’s box. For unlike the bulky bag 3M ships with its recently reviewed 3M MP410, the PK301 ’s zip holder is hardly any bigger than the projector, and so an encased PK301 can still easily be transported in a jacket pocket.

The only complaint we have about the Optoma PK301 ’s build is the lens, as the focus ring around it feels plasticky and flimsy, and the lens itself doesn’t sport a hardware cover. We definitely wouldn’t recommend carrying the PK301 around without using its pouch. 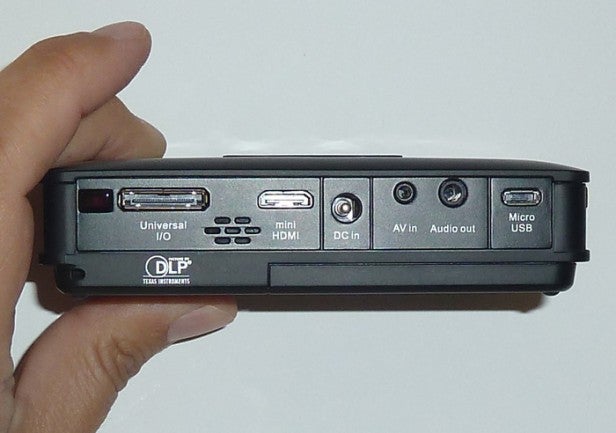 However, the mini or universal nature of some of these ports will mean that many business or home users will have to invest in special adaptors rather than being able to use their standard cables right off the bat. At least Optoma has provided both VGA-to-Universal IO and normal USB to mini USB cables free in the box, though.

The provided USB cable can be used to upload up to 55MB of memory built inside the projector. This might be enough for a few PowerPoints and photos, we guess, but it’s disappointingly small when compared with the 2GB of memory built into the 3M MP220. Chances are you’ll be using a large-capacity microSD card if you fancy using the Optoma PK301 without having to attach an external source to it.

The Optoma PK301 scores quite highly with its file compatibility, though, being able to handle Microsoft PowerPoint (.ppt, pptx), various movie formats (.avi, .mov, .mp4, 3gp), a selection of audio formats (aac, mp3, pcm, adpcm, wma, ogg) and JPEG/BMP photo files. DivX and maybe even .doc support might have been nice too, but most users will be able to make do using the file formats we’ve listed.

Optoma PL301 Features
The Optoma PK301 ’s innards are built around a typical DLP Pico projection system, serving up a native WVGA resolution (800x480p) and a claimed brightness of 50 Lumens, when running off the built in battery, or an impressive-sounding 100 Lumens when it’s plugged into the mains. The 3M MP220 by comparison delivered 65 Lumens, and offers a similar WVGA native pixel count. 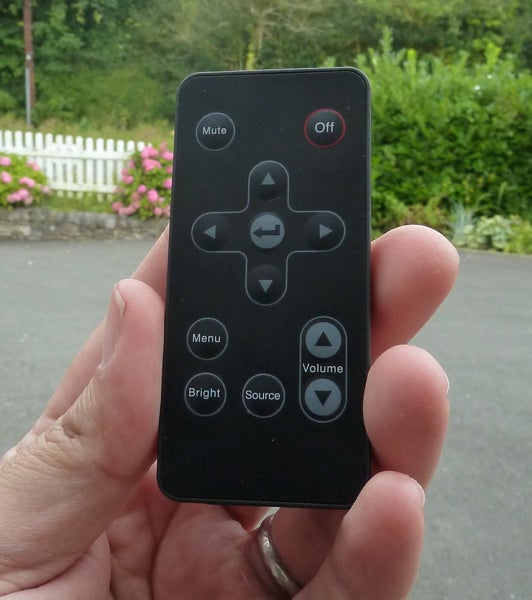 Continuing the comparisons, the 3M MP220 is broadly similar with its connectivity, but its battery lasts for around two hours compared with 1.5 hours for the PK301 . However, the Optoma PK301 is cheaper than the MP220 by around £50, and handily ships with a ‘credit card’ remote control while you have to pay extra for a remote for the 3M offering.

The Optoma PK301 ‘s spec sheet boldly claims that it can produce a 150-inch image in a dark room. This is a huge picture to come from such a tiny projector – but unfortunately in our opinion it’s not a very realistic claim from Optoma. For while we guess the projector will, technically, produce a picture that’s 150-inches across, you’ll struggle to see much content in it thanks to how little brightness is left in the image once it’s been pushed so far.

A much more credible ‘maximum’ image size for the Optoma PK301 based on our tests would be around 60-65-inches in a darkened room. In a reasonably bright room we’d say you’re looking at more like 40-45inches. And if you want the picture to look really bright and punchy, you should probably shave another 10-inches off both those maximum sizes.

The odd thing about the Optoma PK301 ’s pictures is that even with the power lead attached, its pictures don’t look as bright and dynamic as those of the supposedly less powerful 3M MP220. As well as meaning that images don’t leap off the screen at you as much, this slight lack of brightness also results in bright parts of the picture looking a bit grey and listless instead of white and punchy.

The same issue additionally means there’s not so great a sense of range and vibrancy to the PK301 ’s colours. Skin tones also look a bit plasticky and monotone at times.

Optoma PK301 Performance
Another issue with the Optoma PK301 pocket projector is that pictures don’t look quite as detailed and crisp as those generated by the 3M MP220, leaving DVDs looking slightly softer – at least during shots with a lot of depth to them – than we’d ideally like. It must be stressed, however, that pictures definitely look measurably sharper if you use the HDMI input rather than the composite video one.

There are a couple of notable strengths about the Optoma PK301 ’s video pictures, though. First, contrast is unexpectedly good. Or perhaps it would be better to say that black level response is good, as the projector neatly avoids the grey wash over dark scenes that was once so common with Pico projectors.

It’s also good to find motion looking reasonably fluid and crisp on the Optoma PK301 , and that there’s no more evidence of DLP’s rainbow effect (colour striping noise) than you got on the MP220. Which is to say there’s really not very much at all.

So far we’ve focussed on the Optoma PK301 ’s video/photo talents, but broadly speaking the same results also apply to its data reproduction. For the most part this is fine; colours aren’t as punchy as they might be but they’re certainly adequate. Brightness levels if anything seem slightly better. Colours are passably punchy and reasonably crisply delineated – and you don’t feel the lack of colour range and subtlety as much with data feeds as you do video.

The one thing that stops the Optoma PK301 pocket projector from being totally satisfying as a data machine is the slight softness to its pictures – no matter how much we wrestled with the rather twitchy focus ring around the lens. This issue can make regular-sized text quite tricky to read – so we’d recommend using graphs as much as possible in your presentations. 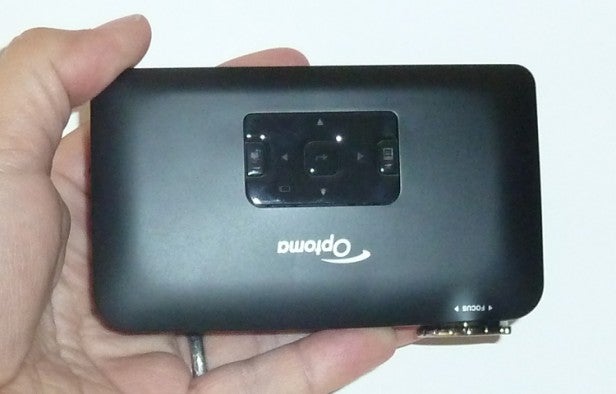 For the sake of completeness we ought to mention the Optoma PK301 ’s sound quality. Sadly, as you would probably expect given its meagre 0.5W of power and the diddy dimensions of the projector’s bodywork, the unit’s sound is best described as perfunctory. You can make out what people are saying and there’s a reasonable amount of treble detail, but there’s no bass, and maximum volume levels are pretty uninspiring.

Optoma PK301 Verdict
Optoma’s PK301 is a neat step forward in performance and flexibility terms from other Optoma pocket projectors we’ve seen. It’s also likely to win fans on account of its extreme smallness and £50 or so saving versus the 3M MP220 model we tested recently. Relatively casual users will likely lap it up.

However, the 3M model’s considerable advantages when it comes to built-in memory, perceived brightness and, especially, sharpness may well tempt relatively serious users to tolerate with its extra size and cost.