So why in God’s name am I reviewing it? Because my preparation for the review involved taking the projector out of my pocket. Having earlier mistaken it for my Blackberry phone…


In other words, since there’s nothing particularly voluminous about my pockets or Blackberry phone, the point about Optoma’s Pico PK101 is that it’s easily the smallest projector I’ve ever seen.


Not that these mere words even start to convey just how small the PK101 truly is, mind you. For it really does fit into a pocket – and I’m talking about a Jeans pocket here, not some cavernous anorak pouch or such like. Or to put it in cold, hard numbers, it’s just 50mm wide by 103mm deep and 15mm high. And it weighs just 4oz. Yowza. 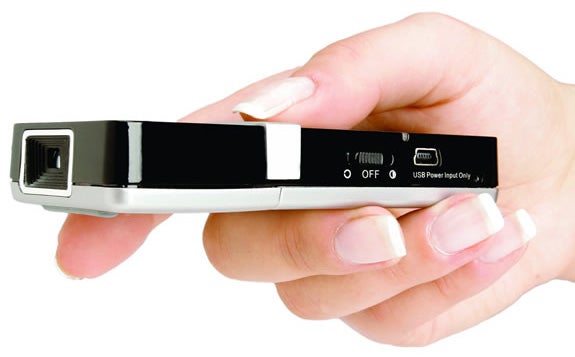 Suddenly the limitations raised in the opening paragraph are starting to look a bit more forgiveable, aren’t they? For clearly the massive convenience of being able to take a projector anywhere and everywhere you go without having to lug a huge bag around is bound to make you more tolerant of a few compromises – even when those compromises are as extreme as those demanded by the PK101.


Crucially for the ‘gadget’ market the PK101 seems tailor-made to entice, the PK101 is as stylish as it is small. Its case is glossy, highly refined in its sliver and black finish, and feels lovely to hold. It might not be quite as achingly hip as the iPhone, but it’s damn close. Admiring glances from friends and family will definitely not be in short supply.

As I mentioned earlier, the Pico is limited to a composite video connection, with this feed – together with stereo sound – being piped into the projector via either a supplied composite video/stereo audio RCA to 2.5mm plug adaptor, or special adaptor cables already available for the iPhone and various Nokia phone models. PDAs are also supported by the system, giving you a means of ‘breaking out’ your PDA applications on to a much larger screen than the one stuck on the front of your portable device.


This focus on phones/portable devices is a sensible move, it seems to me, for surely one of the most likely uses for the Pico will be as a means of quickly and easily sharing photos and videos stored on a phone/PDA/portable media player with a group of assembled mates. Just whip your portable device and Pico out of their respective pockets, hook them together, point the Pico at the wall (probably while you’re still holding it in your hand), and bob’s your uncle: an instant slide/movie show, no matter where you are. Women will want you, men will want to be you. Probably.

The only other connection on the Pico is a power in port, via which the Pico can be charged up using either a supplied plug/USB adaptor, or a laptop. The Pico naturally comes with its own rechargeable battery; you don’t need to have a plug socket or USB source to hand. Battery life is quoted at around two hours max – just about enough for a typical film, though Titanic fans will end up disappointed.


Other bits and bobs of interest on the Pico’s exterior include a simple focus wheel on one side, and a sliding brightness adjustment switch on the other. This enables you to choose between high and low brightness levels – though as we’ll see, the thought of running the image on anything less than the maximum brightness setting is actually nothing short of hilarious unless the battery is running seriously low.

At this point we’d usually get involved with the setup options available via a projector’s menus. But the Pico doesn’t actually allow you to adjust anything other than the image focus.


This means during set-up that the size of the image you watch is totally dependent on how far from a screen or, more likely, wall you hold or place the projector, since there’s no zoom on board. There’s no keystone correction either, so try to avoid angling the picture upwards or downwards.


You can’t even adjust the picture settings – a limitation which, while understandable, is proven a touch unfortunate once you settle down to watch the Pico in action. 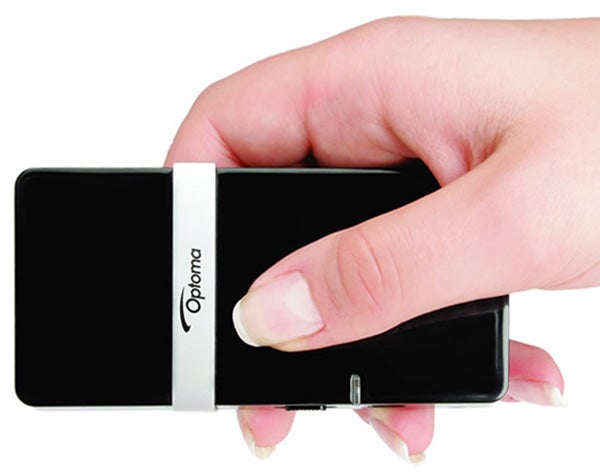 There are at least a couple of numbers on the Pico’s spec sheet, though, that could well put a smile on your face. For starters, its contrast ratio is claimed to be 1,000:1 – well beyond the sort of level we might have expected from such a tiny bit of kit.


The LED light-source used to drive the Pico’s DLP Pico technology heart is also reckoned to be good for a startling 20,000 hours of use – way beyond the lifespans of conventional lamps in ‘big’ projectors.


One final crucial component of the Pico’s makeup is its carriage of a single speaker. Rated at 0.5W, this is there so that you don’t need to find some sort of separate amplifier if you fancy being able to hear the audio of your video sources as well as looking at the video.

To some extent, actually reviewing the Pico’s pictures feels faintly ridiculous. For this is a product so completely and utterly about convenience and style that trying to sound serious about its video capabilities seems almost pretentious. But hey – it’s my job, so what’s a man to do?!


Much to my surprise I can actually start an assessment of the Pico’s picture quality with a surprising positive, for its black level response is remarkably good. Dark photos or dark DVD scenes such as the shots aboard the Black Pearl at night from a DVD of ”Pirates of the Caribbean” suffer remarkably little with the greyness that’s characterised all demo samples of other ultra-small projectors I’ve seen. In fact, the Pico’s black level response shames that of many full-sized projectors – at least those using LCD technology.

More good news finds motion being presented with unexpectedly little judder, blur or dot crawl over moving skin tones, and I never once detected DLP’s rainbow effect. Probably because DLP Pico technology uses three LED lamps (one for the red, green and blue colour elements) rather than the sort of colour wheel that causes the rainbow effect on larger DLP projectors!


The impressive (for a DVD) Pirates… picture quality looks quite sharp via the Pico too, even if you push the image to the edges of its 60in screen size limitation. And finally in the plus column, colours sometimes look surprisingly rich and credible.


That said, at other times – usually during dark scenes, and especially where skin tones are concerned – colours suddenly become distinctly over-saturated and unnatural. Not to mention a bit stripey thanks to predictable shortcomings in the projector’s processing power.


Another colour issue concerns what appear to be slight convergence errors from time to time, resulting in, for instance, a bit of red or blue bleed around the edges of bright image elements. Talking of edges, particularly fine picture elements, such as the masts and rigging of the ships in Pirates…, tend to appear with a distracting light halo around them, and can even shimmer a touch during camera pans.

By far the biggest problem with the Pico’s images, though, is also the most predictable one: brightness. Or the extreme lack thereof.


Trying to watch the picture at anything bigger than 40in across in anything other than pitch blackness is almost impossible. People tend to appear as mere silhouettes against bright backdrops, and dark corners look so black that they seemingly contain no picture information at all. And this is with the lamp output set to high!


Shunt the projector nearer to a screen or wall, so that the picture size gets to somewhere in the region of 30in or less, and the image looks more natural and punchy. But still only if you’re using it in a really quite dark environment. 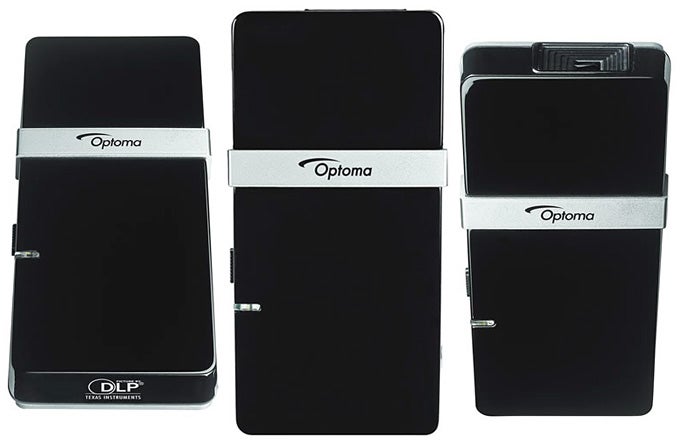 Of course, a 30in image is hardly the stuff of the home cinema dreams we usually cater for in the ‘TV’ section of TrustedReviews. But to be fair, it’s a damn sight better than gathering a group of friends around a puny portable device screen if you’re wanting to share a particularly amusing photograph you’ve just snapped down the pub.


But of course, to reinforce my point about the lack of brightness, the pub you’re in will have to be particularly poorly lit if you don’t want the Pico’s images to be hard to see properly, even if you keep the image size down to 20in. This ambient light restriction on casual use, however predictable, really limits the occasions when I can imagine a Pico coming in handy.


To finish on a more positive note, the 0.5W speaker built into the Pico turns out to be considerably more powerful than I’d expected. Obviously there’s not a trace of bass in the sound produced, meaning everything sounds as tinny as hell. But that doesn’t stop dialogue and treble effects being surprisingly clear and audible, even when used in a pretty large room.


The concept of the Pico is awesome, the design is brilliantly conceived and hugely desirable in an iPhone kind of way, and there are even some signs of genuine DLP image quality.


That said, for me the inevitable performance compromises involved in squeezing a projector into your pocket are ultimately just too acute to make the Pico truly useful. And call me old fashioned, but however much I might feel compelled to own the next hot portable gadget, I still expect that gadget to be useful as well as cool.