The ML1000 is described by Optoma as an ‘Ultra-Slim portable LED projector’. Which turns out to mean that it’s a bit bigger than a true ‘pocket’ projector, but still much smaller than normal projectors. Plus it’s also more powerful than most pocket projectors in terms of both its features and spec. Though this all comes with a fairly high £630 price tag attached. 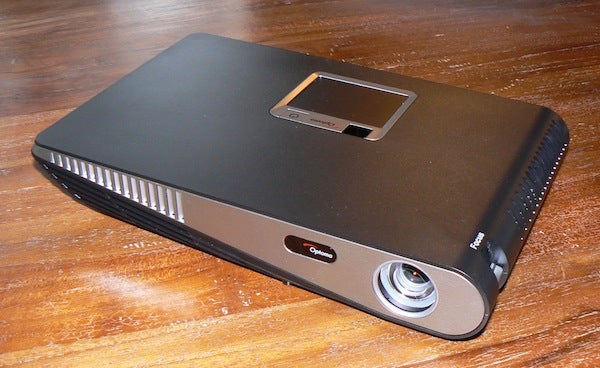 The ML1000 is a striking bit of kit. Roughly the size of a large hardback book, its slim 1.4kg chassis sports an attractively lop-sided design featuring a rounded edge on the right and an angular edge on the left. The ‘two-faced’ effect is cutely emphasised, too, by a bold diagonal split across the front between a metallic silver top half and a black bottom half.

The rear manages to find space for one of the better connection counts we’ve seen on an ultraportable projector: two USB ports, an SD card slot, a D-Sub PC port, a composite input, a 3.5mm audio input, a 3.5mm audio output, a Micro USB and last but not least, an HDMI port for easy connection of most modern PCs and, of course, Blu-ray players. 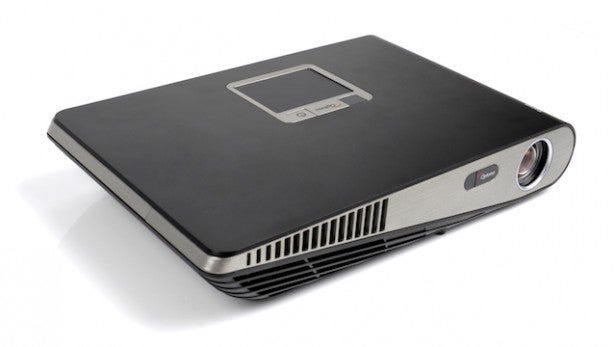 What’s more, the ML1000 can be made wireless via an optional Wi-Fi dongle, or can be used without a PC in attendance at all thanks to its built in media player and office viewer utilities.

As with most ultra-portable projectors the ML1000 uses a DLP LED lighting engine reckoned to deliver 20,000 hours or so of lamp life. This is far more than you’d get from a standard projection lamp, though the catch is that you can’t change the lamps in DLP LED systems; once they die, that’s game over for the projector.

As you might hope from a projector that’s both larger and more expensive than most DLP LED ‘pocket’ models, the ML1000 promises plenty of picture horsepower. Brightness is rated at 1000 Lumens – way higher than the normal portable LED level – while the projector’s contrast ratio is claimed to be 15,000:1. This sort of figure wouldn’t look out of place on a dedicated and much more expensive home cinema projector.

The ML1000 enjoys a native WXGA (1280×800) resolution, delivered through a fixed lens capable of providing a claimed 100-inch image size if you can get it positioned far enough away from your wall or screen. Normally we’d be pretty incredulous of 100 inch image claims from ultra-portable projectors, but if the 1000 ANSI Lumens claim for the projector’s brightness turns out to be accurate then the ML1000 will have a better chance of delivering a watchable image at 100 inches than most projectors of its ilk.

There’s a degree of ‘we’ll believe it when we see/hear it’ regarding some of the ML1000’s claims, but nonetheless there’s enough going on here to potentially explain why the ML1000 should cost more than most ultra-portable models.

A couple of other significant features to run by you are active 3D support if you cough up for optional 3D glasses, and an innovative laptop-style touchpad on the projector’s top side that you tap to bring up the onscreen menus and slide your finger around to move between the options. 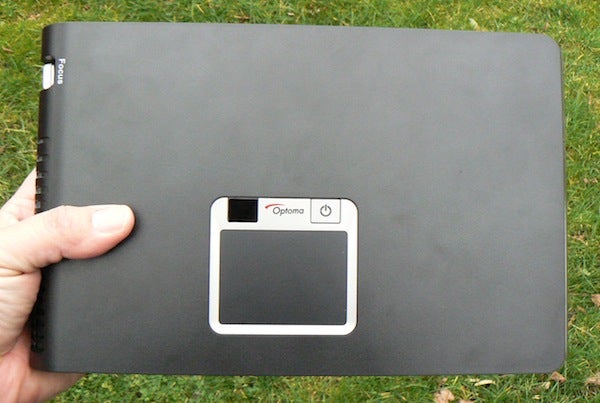 Although it doesn’t feature any optical zoom (typical for the LED/ultra-portable projection market), it does go further than most by offering screw down legs to front and back, to help you get the image positioned where you want it on screen. There’s also auto keystone adjustment to save you having to manually get the edges of the image looking straight if you’re projecting from an angle above or below the screen.

There’s a small (sadly not backlit) remote control to accompany the touchpad mentioned earlier, and the onscreen menus are pretty straightforward for the most part.