Getting 3D working was a royal faff. First we had to plug in the 3D transmitter. Then we had to head into the menus and turn the 3D Transmitter socket on. Then we had to make sure the 3D format option was set to VESA 3D. And finally, bizarrely, we had to turn the 3D Sync Inverter option on, as prior to this the whole depth effect of the 3D images felt reversed, causing an almost instant headache.

This isn’t the first time we’ve had to use the 3D Sync Inverter option on an Optoma projector, even though we never have to use the same feature with any other brand of 3D device.

Once the initial issues were sorted out, though, the Optoma HD36 produced 3D pictures that were high contrast, unusually bright and really rich in colour, revelling in the advantage of having so much lamp brightness to play with. 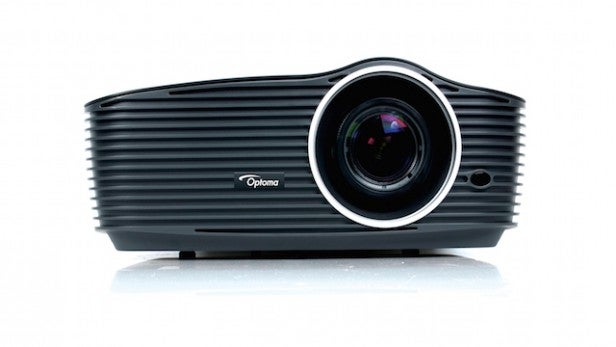 Detail levels are high too, giving a full HD effect from 3D Blu-rays – it’s great to see none of the bizarre red infusion you get with rival BenQ projectors when using them in 3D mode. Best of all there’s practically no crosstalk ghosting noise to take the edge off the sharpness. Excellent.

Sadly the HD36’s integrated speakers didn’t live up to the 30W promise. Even at fairly low volumes the sound appears rather boxy and artificial, and if you try to run it at the sort of volume levels best suited to cinema-scale picture quality all sorts of unwanted vibrations and distortions start to creep in. In short, we’ve heard 10W speaker set ups sound better, and you should only rely on its speakers for the most basic viewing moments.

The Optoma HD36 ships with a nicely proportioned, brightly backlit remote control with a well-considered button lay out.

Also, as hoped, the HD36’s large chassis helps it keep a lid on running noise. When using the Eco lamp setting you can scarcely hear the cooling fans at all, and they’re still easily tolerable even with the Bright lamp setting.

There is an intermittent squeaking noise presumably caused by the colour wheel that can become irritating if you’re sat close to the projector. But it’s quiet enough not to interfere often if you’ve got the projector sat a typical distance in front of or behind you.

With its high brightness and affordable price tag the Optoma HD36 has obvious appeal as a big-screen gaming projector. So we’re pleased to report we measured input lag at a very respectable 33ms with most of the image processing tools turned off. We wouldn’t necessarily recommend the dedicated gaming preset though, as this makes images look too extreme for our tastes.

Should I buy an Optoma HD36?

If you’re in the market for an affordable projector that’s unusually adaptable to both bright and dark room conditions, the HD36 is a great option. If you’re looking for a dedicated movie projector for a blacked-out room there are rival models from BenQ that deliver more authentic colours right of the box and cost slightly less. However, those models aren’t as bright or as good with 3D as the HD36.

Not just another data projector masquerading as a home cinema machine, with careful set up the Optoma HD36 can produce extremely satisfying images for movies and gaming that are unusually easy to adapt to both dark and light room conditions.