Somewhat
confusingly the HD25’s 3D menu allows you to choose between VESA 3D and DLP Link 3D
options. Since the glasses provided with the HD25 use RF transmissions,
you need to ensure that you’ve got VESA 3D selected in this menu.

We’ll
deal with 3D performance on the next page, but first a word or two
about 2D performance – an area where the HD25 mostly impresses. Regular
readers will know that arguably the toughest Bluray disc out there for
putting a TV or projector’s contrast performance through its paces is
the final Harry Potter film. Some scenes of this movie – especially the
start of chapter 12 – are so dark you actually can’t see any image data
at all on poor contrast displays. The HD25 delivers all of these
sequences with a very respectable – by sub-£1000 projector standards at
least – combination of decently deep black levels and pleasingly
involving amounts of subtle detail.

This retention of shadow
detail while simultaneously working to ensure that dark bits of the
picture don’t suffer heavily with low-contrast greyness means that as
well as generally looking more involving, dark scenes also enjoy a sense
of depth and space that’s at least in the same ball-park as bright
scenes. This sort of consistency is crucial to enabling viewers to get
truly immersed in what they’re watching.

The HD25’s prowess with
dark scenes isn’t at the expense of lighter scenes either, with the
projector capable of looking extremely bright and punchy with lighter
material. In fact, it can go so bright if required that its pictures are
enjoyable even with a degree of ambient light in your room. 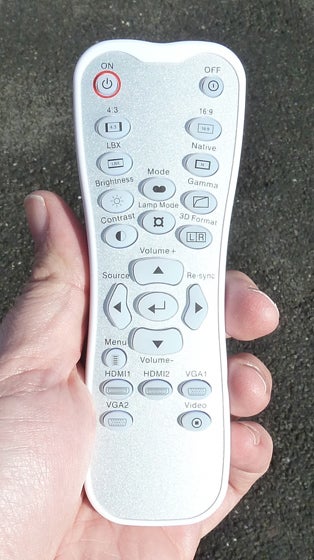 Another
string to the HD25’s bow is how cinematically it handles HD sources.
They look detailed and clean, and there’s impressively little judder,
loss of resolution or additional noise when showing motion. The HD25’s
freedom from the fizzing flaw over skin tones common with budget DLP
projection is particularly welcome.

It
should be added here that the HD25 isn’t as forensic in its attitude to
reproducing fine detail as some projectors are. But while this might
not suit some sensibilities, we actually found its more gentle approach
to sharpness appealing, as it stops you getting distracted by grain and
harsh edging – as can happen with projectors that apply a more
aggressive sharpening process.

Colours are good on the HD25 too –
or at least they are with a little calibration work. For example, make
sure the BrilliantColour level option isn’t set higher than ‘four’, or
at a push ‘five’. Bizarrely, if set higher than that it sucks the warmth
out of the projector’s colour tones like some kind of red-tone vampire. 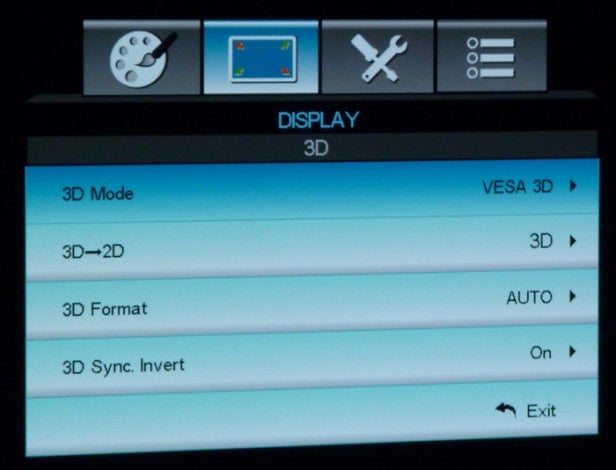 Also,
using the ‘Film’ and, to a lesser extent, ‘Standard gamma
presets most appropriate for film viewing, we found the palette to
favour greens and yellows a bit too strongly, especially with regards to
skin tones. But this is readily fixed via the provided colour management
system – so much so that you can end up with colours that look
ultimately more natural than those of BenQ’s rival £699 W1070 projector.

While 2D performance is generally quite good, there are a couple of unfixable
problems worth noting. We felt aware at
times of the rainbow effect; a phenomenon whereby bright parts of
predominantly dark images can exhibit flickers of red, green and blue
colour stripes. The issue isn’t particularly aggressive by budget DLP
standards, to be fair; you only really notice it if you rove your eye
around the image. It’s also true that some people won’t see it at all,
as the susceptibility to seeing the rainbow effect varies greatly from
person to person. The bottom line, though, is that the
rainbowing did occasionally distract us from what we were watching,
undoing a little of the strong work done elsewhere.

Another issue that we were powerless to control was the
projector’s running noise. Even when using the lamp’s ‘Eco’ setting, where the
cooling fans don’t have to work so hard, we were slightly aware of a
whining noise from the projector during quiet moments of our test discs.
This is made worse if you’ve got the DynamicBlack feature running
(which we recommend you do, albeit only on its ‘Low’ setting), since
the projector’s light output shifts cause the pitch of the whine to vary
slightly, drawing more attention to it. Thankfully, switching the lamp
to its brighter ‘Normal’ mode with 3D viewing (to
compensate for the dimming effect of the active shutter 3D glasses)
doesn’t greatly add to the running noise. Though on the downside, nor
does the picture’s brightness increase all that much!