The HD25 is the first new home cinema projector we’ve tested from once-prolific manufacturer Optoma since the HD83
we reviewed in June 2012. And even that model was actually a rejig of
an earlier version, rather than a brand new projector in its own right.

With
this in mind, it’s perhaps surprising that the HD25 is pitched as a
budget home cinema projector rather than a swanky mid-range or high-end
model that might have enabled Optoma to really show off what its
engineers have been busy with over the past year or two. Still, if the
HD25 delivers decent image quality for its £800 price tag, then we’ll
doubtless end up feeling happy enough with Optoma’s long-awaited return
to the home cinema fray.

The HD25’s
design is reasonably pretty, thanks to its glossy white finish, coffee
table-friendly dimensions, and boldly curved front edge. However, there
are also some tell-tale signs of its comparatively budget (for a
projector at least) £800 price tag, including a rather plasticky finish
that’s especially noticeable around the lens housing. This cost-cutting
theme continues with the extensive use of grilling down each of the
projector’s edges, which hints at a rather basic approach to heat
dispersal and potentially inefficient use of the projector’s lamp power
should those grilles turn out to leak light as well as heat. 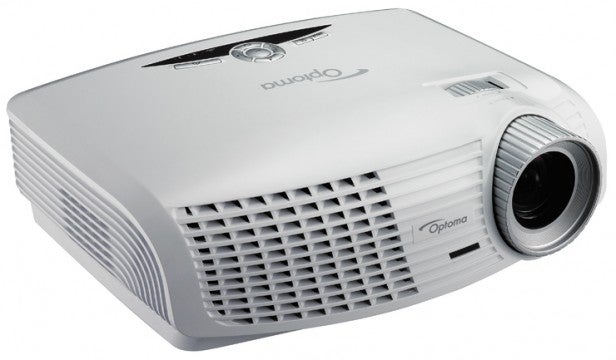 Connectivity
is actually quite good for a budget projector though. The two HDMIs are the
most important jacks, but some users will also appreciate the twin D-Sub PC
ports. The most surprising connection, though, is a small circular jack
to which you can connect a diddy 3D transmitter. Yes, that’s right:
despite costing just £800, the HD25 provides active 3D, even going so
far as to supply both the 3D transmitter and a pair of 3D glasses in the box.

The HD25 supports
its active 3D talents, moreover, with a Full HD native pixel count of
1920 x 1080. And that’s not the only number that impresses for £800
either; also promising is the combination of a claimed 2000 Lumens of
output brightness and a 20,000:1 contrast ratio achieved with the help
of a so-called DynamicBlack system that adjusts the lamp output
automatically in response to the image content. Furthermore Optoma also
claims that this dynamic contrast system is cleverer than most as it
also works to retain shadow detailing, so that the quest for a
convincing black colour doesn’t result in dark picture areas looking
excessively hollow and flat.

The
HD25 is a DLP projector, and as with most DLP projectors these days,
it’s equipped with Texas Instruments’ BrilliantColor technology for
boosted colour vibrancy. Experience suggests that this colour boost can
be accompanied by an alarming increase in grain though.

In
keeping with most budget projectors, the HD25 sports built-in speakers.
In fact, these are a cut above the norm and deliver a startlingly high
10W output using an SRS Wow HD processing engine to enhance bass,
clarity and soundstage size.

Setting
the HD25 up isn’t a particularly great experience. The projector only
delivers a quite limited amount of optical zoom, and (in keeping, it
must be said, with most sub-£1000 projectors) doesn’t provide any
optical image shifting, either vertically or horizontally. Many people
will thus to have to use the projector’s provided keystone adjustment to
get the sides of the image straight – a process which, of course,
digitally manipulates the picture, denying AV enthusiasts the pixel for
pixel image quality they crave. 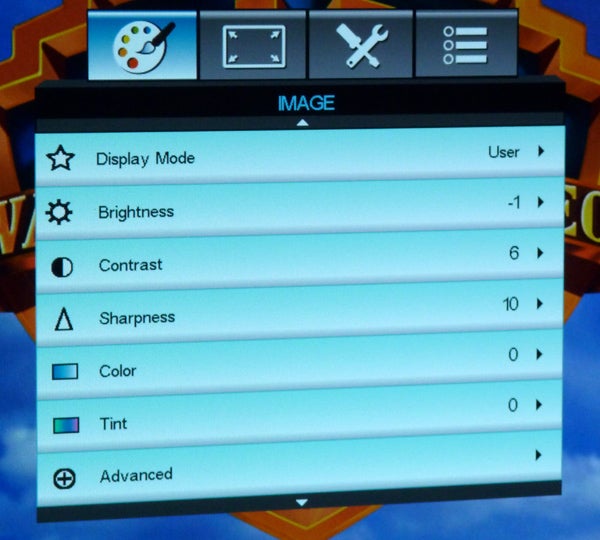 The
focus ring around the lens is unusually robust and capable, though,
which gives you pretty fine control over the sharpness of your picture.
The HD25’s on-screen menus are straightforward for the most part too,
and the unusual dog-bone shaped remote is boldly backlit and fairly
intuitively laid out once you’ve got used to how different its functions
are to those you might find on a typical TV remote.

We were
excited for a moment to spot image shift and zoom tools within the
on-screen menus, too. Unfortunately though, it quickly becomes apparent
that these are both limited in scope and digital rather than optical in
nature.

Further exploration of the menus uncovers a few useful extras including the ability to adjust the intensity of the DynamicBlack and
BrilliantColour systems, along with a variety of useful content-based gamma
presets. Actually, since there are no general presets beyond simple
‘User’ and ‘3D’ profiles, these gamma presets are really your only way
to significantly alter the way pictures look without getting stuck into
the TV’s more complex picture set-up tools – tools which include a
colour management system that allows you to adjust the hue, saturation and
gain of all six main video colour components.