What is the Optoma GT1080Darbee?

Optoma’s £780 GT1080Darbee is unique in the projector world for its combined focus on video-gaming and high-level video processing – two features that don’t go together at all.

However, it really does make its unique combination work, and in doing so establishes itself as a seriously tempting home entertainment bargain. 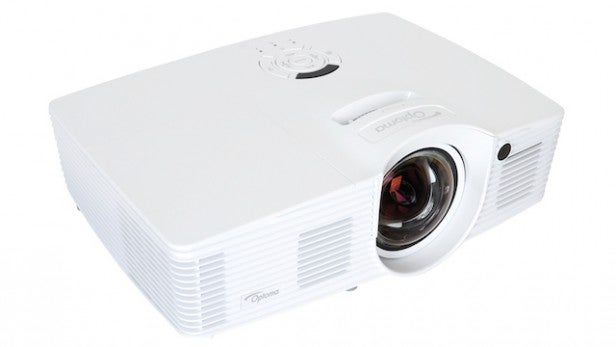 While the GT1080Darbee is a relatively lightweight, small and plasticky projector compared with some of the upmarket models I’ve tested in recent months, it still manages to look attractive with its white finish, polished top edge and artfully domed lens cowling. Even its cooling vents are kind of stylish – and, happily, don’t allow much light leakage.

This latter is particularly important given that the GT1080Darbee sports a short-throw lens, meaning it will almost certainly be sat in your line of vision when watching a film or playing a game.

The remote control shipped with the GT1080Darbee is a decent effort. It’s made of lightweight plastic, but it fits comfortably in your hand, is brightly backlit to aid use in a darkened room, and features large, tactile, reasonably well-organised buttons.

Unfortunately, the GT1080Darbee lacks optical zoom or optical image-shifting capabilities. This means you can adjust the size of the image only by moving the projector’s position relative to your screen. Also, you’ll likely have to use the built-in keystone correction system to get the left and right edges of your image perpendicular.

Using keystone correction is an issue, since it essentially means you’re having to distort the image’s geometry, rather than enjoying absolute pixel-for-pixel accuracy in the mapping of an HD source to the GT1080Darbee’s Full HD native resolution.

The only physical setup aids are a focus slider accessed via the projector’s top panel, and screw-down legs under each corner of the device to adjust the image’s angle so that it appears in the right place on your screen.

The GT1080Darbee ships with a number of picture presets. Of these, the Cinema option is best avoided; bizarrely, it leaves black levels looking horribly washed out. The Vivid mode should only be used if viewing the projector in a fairly bright room.

The two best presets for dark room conditions are the Game and Reference settings. These offer the most useful balance for gaming and movie viewing respectively between black level response, brightness and colour saturation.

However,  be sure to leave the Dynamic Black mode on with these two settings; otherwise, the image loses detail in dark areas. I’d also recommend adding a  single step of brightness to the Reference preset, to boost shadow detail.

Impressively for its price, the GT1080Darbee carries enough colour management and gamma options to support professional calibration by an Imaging Science Foundation (ISF) engineer – if you want to pay one for the privilege. In many ways, though, this projector performs pretty well right out of the box, especially when it comes to the Gamma settings, which I’d recommend leaving on their defaults for both video and game-viewing.

Turning finally to the Darbee modes, I recommend the Hi-Def setting set to about 55% of its maximum strength for films, and the Gaming setting at about 40% strength for games.

The Full Pop mode is best avoided for reasons discussed in the Performance section.

The GT1080Darbee’s name tips us off to two of its key features: a native 1080p resolution, and the option to activate the acclaimed – and now exclusive to Optoma projectors – Virtual Presence processing from video specialist Darbee.

According to Optoma’s marketing blurb, the Darbee processing ‘uses neuro-biologic algorithms to enhance detail and depth in skin tones, textures and relative surfaces’. In plain English this means it sharpens pictures and boosts their contrast range.

The GT1080Darbee’s other big claim to fame is its potential for giving gamers a performance edge thanks to a specially designed Enhanced Game Mode setting. This boosts contrast and colour, and delivers an exceptionally low input lag measurement – the time a device takes to render its pictures – of just 16ms. 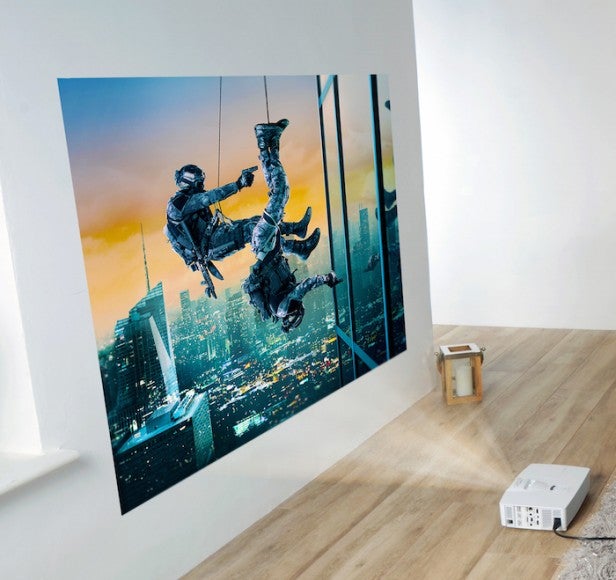 Optoma’s new projector has some other impressive figures up its sleeve, too. Peak brightness is reckoned to be an unusually high 3000 lumens, while its contrast ratio is again a promising 28,000:1. Many potential buyers will also be attracted by its extremely short-throw lens, which can deliver a 100-inch image from a throw distance of just over a metre.

The GT1080Darbee continues to impress with its connections. For instance, one of its two HDMIs supports MHL connectivity, which makes it easy to wirelessly share content from MHL devices such as the optional Optoma HDCast Pro system, a Roku streaming stick, tablets and smartphones.

There’s also a 12V trigger output that can be used for, say, firing up an external motorised screen; a powered USB port to power an HDMI dongle (such as a Google Chromecast); a port for adding an optional extra 3D sync transmitter; and an audio output.

While this audio output can be used for pushing sound out to an external audio system, the GT1080Darbee does have a built-in 16W speaker.

Other notable features include a Dynamic Black system that continually adjusts the lamp output depending on the assessed needs of the image being shown.