I tested the ALR100 with a trio of projectors: Optoma GT5000 ultra-short-throw model that sits right below the screen; and a couple of more typical “table top” projectors (the BenQ W2000 and JVC DLA-X7000) that sit a little higher than the GT5000.

The projector screen was also put through its paces in a variety of lighting setups: with my usual ceiling lights, side windows, wall lights, and direct light cast by sunlight from the opposite side of the room.

The results were predictably mixed, but there’s no doubt that the ALR100 really is capable of delivering very watchable pictures in levels of light in which normal projectors would be almost unwatchable. 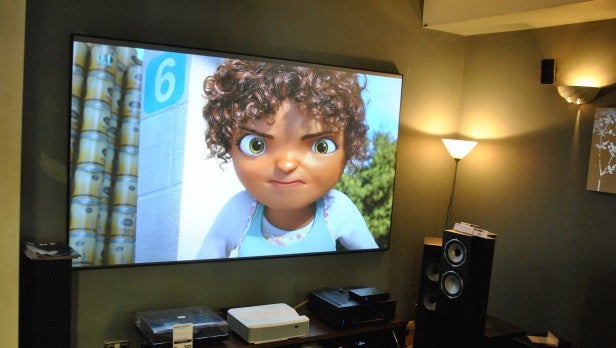 In its optimal setup, with the short-throw projector and the other projectors sitting on a low table and just my ceiling lighting on, it delivers results that make its £900 asking price look seriously cheap.

Projected pictures look eye-catchingly rich in colour, brightness and, most impressively of all, contrast – despite the ambient light all around them. This allows you to become absorbed in the on-screen action without having to submerge your family in darkness.

Particularly remarkable is the depth of black level the screen can render in ambient ligh. Dark scenes and dark parts of shots appear with so little sign of the usual greyness you’d expect to see with a projector in a lit room that it’s almost uncanny. It’s as if you’re looking at some kind of black hole in your living room.

Add to this the retained brightness and colour vibrancy and you have a very watchable picture. Although it can never truly be as bright and intense as the pictures on a 100-inch TV, those would cost tens of thousands of pounds – if you could even find a TV at that size.

I switch to my usual (far more expensive) reference projection screen with the same projectors, in the same light conditions. While it held its colour and brightness fairly well, its black levels were pretty much non-existent versus the ALR100. 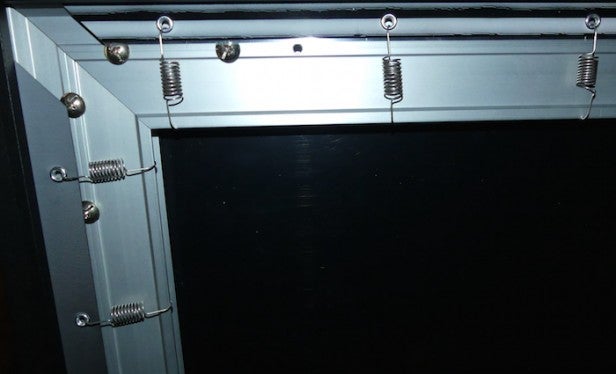 Slowly moving table-top projectors up from just beneath the ALR100 shows a gradual but clear reduction in both the brightness and black-level depth. The drop off isn’t shockingly severe until you reach a point where the projectors are actually firing down on to the screen. You shouldn’t write off the ALR100, even if you don’t think you’ll be able to get your projector sited in the absolute perfect spot.

A more important consideration is the type of ambient light in your room. While the ALR100 does outstandingly well at cutting out light from above, it only marginally reduces the impact of bright light shining across it from the side and, especially, sunlight hitting it from directly opposite. As a result, I can imagine many users having to close their curtains to keep out ambient light, even though they should be able to keep their room lights on.

Going back to watching the ALR100 in a fairly optimal situation, I was also impressed by the complete absence of either hot spots in the image or any of the shimmering often seen on ambient light screens. This obviously makes it much easier to become immersed in the pictures you’re watching.

I was also able to watch the ALR100 from really quite extreme angles without the picture losing any significant brightness or contrast – another family-friendly strength versus rival ambient light-screen technologies.

The ALR100’s colour response is pleasingly neutral too, since the screen’s structure introduces seemingly no unwanted undertones, despite the strangely dark and metallic face it wears when not in use. The screen’s impressive contrast and brightness credentials mean it delivers a startlingly natural colour tone that holds up even with your lights on.

Yet more good news finds the ALR100’s pictures looking crisp and detailed, despite the presence of the light-blocking “ridges” in the screen’s structure. These ridges don’t appear as visible lines across the picture, nor did they cause obvious jaggedness in any bright, contoured edges that your pictures may contain. 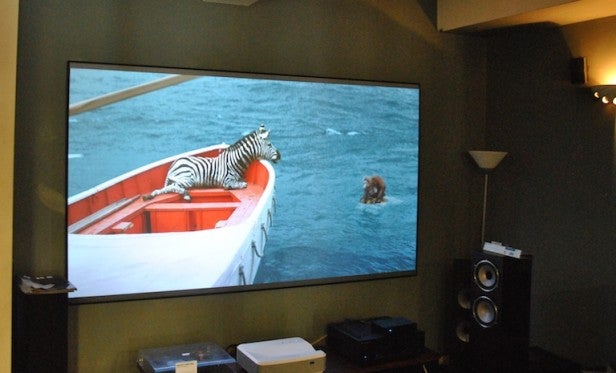 While the ALR100’s party trick is that you can use it in some kinds of ambient light, people who buy one will very likely want to use it for serious dark-room movie viewing. I’m happy to report that it remains an effective screen with the lights off. Contrast and brightness are impressive and natural, and issues such as hot-spotting and shimmering are still blissfully absent.

You’ll probably want to change your projector’s output to low brightness rather than the high brightness output I’d recommend for viewing it in ambient light. The screen’s design can gently reflect bright objects in your room in a way a normal projector screen would not.

Should I buy an Optoma ALR100?

If the ALR100’s fairly specific operating limitations – 100-inch screen size, fixed-frame design, need for a projector angling its pictures up from below and predominantly ceiling-based lighting – fit your room layout, then the ALR100 is far more effective than I’d have expected it to be for the money.

There aren’t many useful alternatives out there, but if you have an extra £2,500 or so lying around you could track down Screen Innovations’ Black Diamond screens, which use a different multi-layering technology to soak up a wider range of ambient light sources.

The ALR100 is easy to put together and delivers excellent ambient light results for the money – especially when it comes to retaining black -evel response. The catch is that it’s at its best under fairly specific conditions.