All that work to house so many components within the phone’s stealth 3D camera array enables the Find X to sport a display unlike any other phone currently available (Vivo Nex S notwithstanding). The large 6.4-inch ‘panoramic arc screen’ benefits from a slender 19.5:9 aspect ratio, an extended 2340 x 1080 Full HD+ resolution, and an unprecedented 93.8% screen-to-body-ratio.

As Sony highlighted with the display on its latest Xperia XZ3 flagship, rounded corners make a phone screen feel far more cutting-edge – and the Oppo embraces this logic wholeheartedly. The Gorilla Glass 5 that curves around the sides feels great under-finger too. 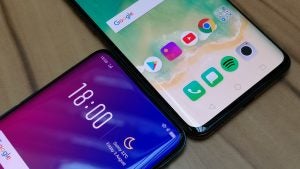 The use of an AMOLED panel is unquestionably appreciated, rendering colours with rich vibrancy and attractive contrast. Sure, the Find X doesn’t boast the quad-HD+ visuals of the screen used by the Samsung Galaxy S9, but it remains a real looker in most situations.

Most imagery packs far greater punch than you might be used to, however, leading me to believe that the Find X opts for pizazz over accuracy with regards to its visual calibration. Unfortunately, there are no options to mellow out the viewing experience on offer. You can tweak colour temperature if you wish, plus there’s a night viewing mode and also a video enhancer option to boost the look of video content even further in the other direction.

One feature borne out of the phone’s lack of bezel or notch that I really do appreciate is the use of the whole display to inform that notifications are waiting. Since there’s no notification LED, the Find X pulses a wave of colour around the sides of that near bezel-free panel when a new message or tweet arrives. It looks decidedly futuristic and can be customised to distinguish between calls, texts and general notifications, with three different colour combinations to choose between. 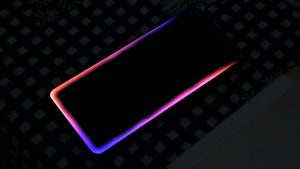 There’s also an always-on screen setting that displays a clock when the Find X is locked. As features go, this is nothing new, but despite the phone warning about increased power consumption when it’s switched on, the use of an AMOLED means that battery drain is negligible.

I did notice one issue concerning the panel, or perhaps it could be an unfortunate byproduct of the factory-fitted screen protector that covers the screen of the X out the box. Tilting the phone off-angle usually results in a notable colour shift towards pinky hues, a problem that’s often associated with cheaper AMOLED panels (although I’m giving Oppo the benefit of the doubt here). The effect isn’t all that pronounced but it’s unmistakable, especially when looking at on-screen content that’s predominantly white.

Oppo’s bread and butter is well-priced handsets that look great. They should offer enough oomph to cater for everyday mobile tasks, and support robust camera experiences – in this regard, the Find X is a break from tradition.

With a Qualcomm Snapdragon 845 processor at its heart and 8GB of RAM at its disposal, this phone reads like a true 2018 Android flagship. As you can imagine, general usage proves a doddle for the Find X, as is everything from 4K video recording and split-screen multitasking to intensive gaming. Based on its Geekbench 4 results, it comes in among the top 25 highest-scoring devices based on single-core scores, and among the top 20 devices for multi-core scores. 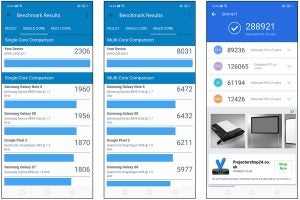 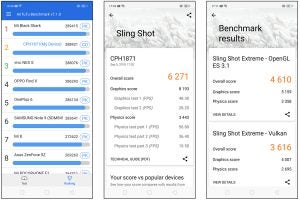 On the subject of gaming, the integrated Oppo Game Space software is also on-hand to optimise performance in the pursuit of the smoothest gaming experience possible. Every time you open a game, the phone frees up memory, silences notifications, reallocates resources, and restricts background network activity from other apps.

There’s no obvious way to disable Game Space, so it’s tricky to compare gameplay performance on titles like PUBG Mobile without the feature enabled but I can at least confirm that controls feel tight and frames rarely dropped.

The phone also packs in a whopping 256GB of internal storage – which is just as well, since there’s no microSD expandability. The Find X benefits from Bluetooth 5.0 is, but NFC isn’t part of the package – a notable shortcoming if you typically make contactless transactions using your phone.

Having used a myriad of skinned Android experiences from the world’s leading manufacturers, Oppo’s ColorOS 5.1 running atop Android 8.1 Oreo as found on the Find X feels a touch enigmatic.

It totes a few standout features such as app encryption, quick-launch gestures, Quiet Time (not dissimilar from iOS’s Do Not Disturb feature), and an integrated screen recorder. However, there are a gamut of quirks that take some getting used to – and, in some cases, just don’t make sense from an interaction standpoint. 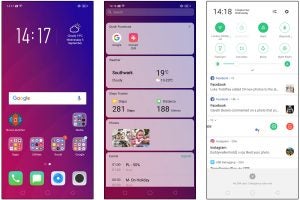 There are a number of pre-loaded first and third-party apps that Oppo has crammed onto the Find X, most of which you can’t uninstall. For some reason, there are three web browsers by default: Oppo’s own, Google Chrome and UC Browser – which annoyingly throws out news notifications without asking. There’s no apps drawer and no option in the Settings menu to add one. There are screen overlay and recording controls that only appear when using an app in landscape, plus notifications can’t be dismissed in a single swipe. In addition, one-handed mode is hard to find and awkward to use.

By default the option sits up in the notifications pane, meaning you need to reach up to activate it – frustrating considering its placement on-screen highlights its very need. I ended up adding what ColorOS calls the ‘assistive ball’ – a moveable soft key that can be configured to perform various tasks. I use it frequently to toggle one-handed mode on and off; otherwise, I’d regularly have to perform handheld acrobatics to access the feature, running the risk of dropping the device.

Customisable navigation keys are a comparatively welcome inclusion and the ability to swap them out for gesture-based navigation is appreciated, too. However, there’s little else you can edit within the interface and across your home screens.

Jumping between keyboards is another slightly confusing element of the Find X’s software. Similar to iOS when using a third-party keyboard, you’ll be typing on the default keyboard (Google’s G Board) most of the time. But in certain situations, such as password entry, the phone will automatically switch to Oppo’s own secure keyboard.

Whilst the promise of enhanced security brings peace of mind, the introduction of the feature without warning can prove frustrating since it exhibits wildly different keyboard behaviour. For example, the Shift key acts more like a Caps Lock, and there’s no prediction engine to speak of. One keyboard also vibrates (using the phone’s particularly noisy, rattling vibration motor) whilst the other doesn’t. It’s a jarring experience that would benefit from greater user control.