The Oppo F1 Plus runs Android 5.0.1 at present, with the ColorOS 3 interface on top. This is the latest version of Oppo’s custom UI, but a really old version of Android.

ColorOS might prove the bigger issue for some of you. Its style is very similar to Huawei’s EmotionUI. These are two Chinese companies with an approach to software often disliked by Western reviewers.

It’s an iPhone-mimicking interface, more so than any version of ColorOS I’ve seen to date. There’s no apps area, just a bunch of home screens, and both the icons and the core inbuilt apps look a lot like what you get with iOS.

Being iPhone-like is everything, it seems.

The positive side of this is that the top-level look of ColorOS 3 appears quite modern. I found ColorOS 2 quite dated in the cheaper Oppo F1, but here the softer icons and cleaner transition animations make the interface seem ‘current’.

It takes a few too many pointers from Huawei, though. As standard the lock screen is a Magazine widget that displays a ‘random’ image every time you try to unlock your phone. I don’t understand the appeal: is there some status attached to having your phone cycle between displaying a sports car and some model-looking young woman every time I pick it up?

You can turn this off and use a basic lock screen with an image you specify, but elements like this make ColorOS an interface you have to deal with. 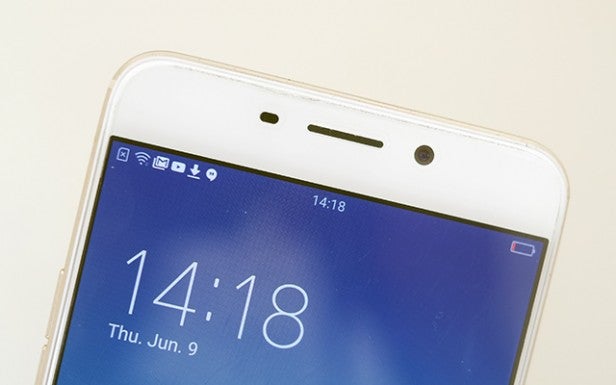 There are no day-to-day performance issues, though. The Oppo F1 uses a mid-range CPU rather than a high-end one, but ColorOS is virtually lag-free and the phone has a borderline-ridiculous 4GB of RAM too.

It has the Helio P10 CPU, part of MediaTek’s recent renaissance of chipsets that try extremely hard to outdo what Snapdragon produces. This is an unusual chipset. In architecture terms it’s similar to something like a Snapdragon 616 because it uses eight Cortex-A53 cores.

However, where a Snapdragon clocks four of these at a higher speed and four at a lower speed, the Helio P10 lets all eight run at up to 2GHz, presumably using more dynamic clock speed management to avoid using too much power. 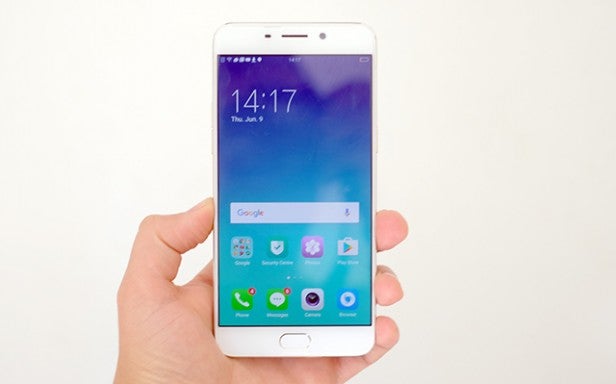 It scores 3900 in Geekbench 3, which at this stage is the least you’d expect for a phone of this price. Cheaper mobiles offer similar performance. The cheaper Sony Xperia M4 Aqua has a similarly-powerful CPU setup, for example.

The one problem is that if you push some of the most demanding games up to their max visual settings, you will notice quite a lot of slow-down. Asphalt 8 is quite choppy in ‘High’ mode. It’s fine at ‘Medium’, but given the impressive-looking benchmark results, you’d hope for more.

This could be down to the Mali T860M2 struggling with the 1080p rendering demands, or it could be a lack of optimisation for MediaTek CPUs by developer Gameloft. Or a mix of the two.

It’s not an isolated incident either, though. Minecraft too has intermittent frame rate issues if you increase the draw distance and field of view, for example.

Some other games appear unaffected. Dead Trigger 2 works perfectly with the visuals maxed-out. A large screen and loads of storage make seem like a great gaming phone, but sadly it isn’t one. A phone with a Snapdragon 650 or higher is going to perform much better.