What is the Oppo F1 Plus?

The Oppo F1 Plus is one of the most “normal” phones made by Oppo to date. This is a company that caused some fuss with the release of the Oppo N3 and its rotating camera, so with that in mind, “normal” isn’t meant as a dig.

It’s one of the more impressive phones you’ll find for £300, netting you a truly premium-feeling handset with a decent camera and a screen on which you can easily watch films. However, disappointing gaming performance means it loses out on a full recommendation.

The Oppo F1 Plus is a sizeable phone – with its 5.5-inch screen, it was never going to be small.

Elegant, high-class design stop this from being an issue – unless you don’t want a handset of generous proportions, that is. Taking a few design notes from recent iPhones, the Oppo F1 Plus sports an aluminium shell, a one-piece housing that curves around at the sides and is bevelled where it meets the glass of the screen.

Its design isn’t original but it’s attractive nonetheless, and there’s barely any redundant space to the left and right of the display. Unlike the Oppo F1 I reviewed recently, there’s no plastic on show aside from the thin strips on the back that are used to let the wireless antennas breathe. 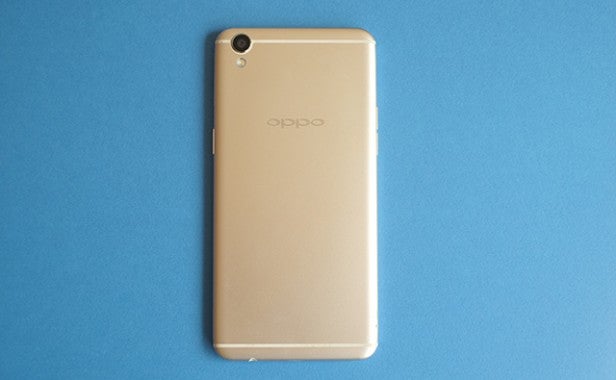 Like its cheaper sibling, there’s a hint of gold to the finish – but it’s of a tone that almost anyone should be able to swallow. This is not smartphone design via Moschino. The Oppo F1 Plus is remarkably simple and clean.

It’s also one of the first Oppo phones I’ve used to have a fingerprint scanner. As with this handsets overall design, it isn’t out to make waves; it sits in the same “central soft key” position favoured by the likes of Samsung and Apple. It rest on top of a clicky button rather than a static pad, and its response is near-instant.

Like other handsets with fingerprint scanners, its main purpose is as a means to unlock the F1 Plus. 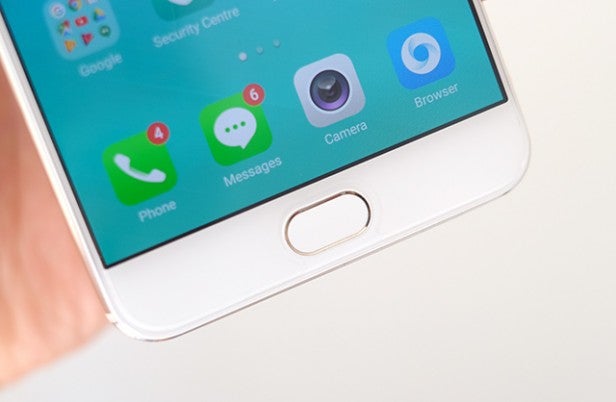 Storage is another highlight. The Oppo F1 Plus is supplied with 64GB, so few people will need to worry about getting a microSD card. For a £299 phone, this is a major bonus. microSD remains an option, though. The Oppo F1 Plus’ slick design may give it mainstream appeal, but Oppo hasn’t forgotten its original geeky following. A SIM tray holds the usual SIM slot and a second slot that can be used to hold either a second SIM or memory card.

The Oppo F1 Plus isn’t cheap, but you do get plenty such hardware extras for the money.

Oppo hasn’t piled its budget into conspicuous spec upgrades, however. The Oppo F1 Plus has a large 5.5-inch display, but its resolution is a conservative 1080p. You’ll notice when viewing the screen from around 15cm away, but this remains a sharp display.

The main difference between the Oppo F1 Plus and a handset such as the Note 5 isn’t the resolution, but its ability to deal with bright sunny days. Outdoors visibility is a notch below the best, and while the screen is capable of going bright enough to make the display pretty clear, it’s only with the Auto brightness mode is maxed out. 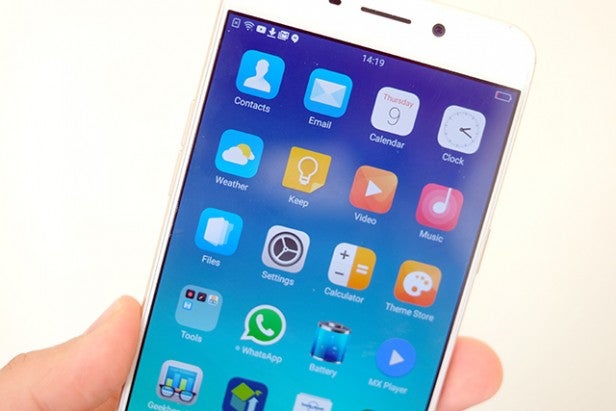 As I found with the Oppo F1, the Auto brightness algorithm needs work. It’s only an issue outdoors on those sunny days, though. In less challenging conditions it’s perfectly fine.

Colours are a little more saturated and lively than the sRGB standard, but I get the sense that – like headphones with extra bass – Oppo is responding to what the public wants. I’d appreciate some screen controls for temperature or saturation, however; there’s no such control on offer in the Oppo F1 Plus.