OPPO has built up a cult following among home cinema fans with a succession of feature-packed yet affordable DVD players, and is now taking the next logical step by moving into the Blu-ray market.


We’ve been salivating over OPPO’s debut Blu-ray player (not literally, it invalidates the warranty) ever since it appeared on the company’s US website last year as the BDP-83. But at long last the company has launched a European version (adding an extra 1 to the model number for good measure), giving us a chance to find out how well OPPO’s talents transfer to the world of hi-def.


Why are we so excited by this Profile 2.0 player? Well, not only does it boast one of the most extensive feature lists of any hi-def deck we’ve encountered, but the on-board electronics also have a distinct high-end flavour – plus the £450 price tag is a lot less than you’d normally expect to pay for such a well-endowed deck.

The look and feel of the BDP-831 befits a player with lofty aspirations. The casing is solid and reassuringly weighty, and the brushed aluminium fascia is bereft of any crowd-pleasing embellishments – it’s understated, esoteric and seriously stylish. We love the cluster of silver buttons on the right, alongside a USB port designed to play digital media from flash drives – and as we’ll discover, the OPPO supports a dizzying array of formats.


Equally pleasing is the rear panel which leaves no stone unturned. Naturally you get HDMI v1.3, component and composite video outputs, while the audio line-up includes a set of 7.1-channel analogue outputs, separate analogue stereo outputs, plus optical and coaxial digital audio ports.


This comprehensive set of sonic sockets, combined with the OPPO’s on-board HD audio decoders, means the OPPO is ready to serve any sound system. It will output Dolby TrueHD and DTS HD Master Audio bitstreams to cutting-edge receivers boasting HDMI v1.3 inputs and the relevant decoding, or output them as PCM from the HDMI or multichannel analogue outputs for less sophisticated amps.

The fun doesn’t stop there. There’s an Ethernet port for downloading BD Live content and a second USB port on the back for adding extra memory to the 1GB already inside the player. And if this deck is intended as part of a custom installation, the IR input and outputs make it easy to integrate.


Although the lack of built-in Wi-Fi support is mildly disappointing, OPPO says it’s going to sell a compatible USB Wi-Fi dongle through its online store. In the meantime, there’s more than enough elsewhere to make up for it. Possibly the most remarkable feature is DVD-Audio and SACD playback, a talent that has until now been reserved for the mega-expensive Marantz UD9004. And when you consider that the OPPO can also play almost every DVD and CD format going (apart from DVD-RAM) – as well as DivX HD, MKV, JPEG, AVCHD and WMA files from USB or disc – then it has to be the most media-friendly Blu-ray deck in the business. Oddly enough, the only format our sample wouldn’t play is MP3, but OPPO says that it will be activated on production units.


Handling picture processing duties is Anchor Bay’s Video Reference Series (VRS) chip, which was last seen gracing the DV-983H DVD deck. It tackles deinterlacing, DVD upscaling and detail enhancement among other things, and if implemented properly it could give this player a real advantage over similarly-priced rivals.

Also on offer is a range of zoom modes that alter the aspect ratio, including a vertical stretch mode for 2.35:1 Constant Image Height displays. You also get 1080p/24 output and a Source Direct mode that outputs the raw video signal without applying any processing, should you want to run it through an external video processor. Such is OPPO’s generosity that it even throws two Blu-rays into the bargain – Spears & Munsil’s video calibration disc and an AIX Records HD sampler & audio calibration disc.


Thankfully OPPO has ditched the rudimentary onscreen design of its DVD players for a more sophisticated system, which uses bright, welcoming graphics and a foolproof structure. This makes setup a doddle, despite the extensive array of picture and sound tweaks on board.


The picture menu offers nine adjustable parameters to play around with, giving you a great deal of control over how the image looks, and for audio you can tweak each individual speaker channel as well as selecting various options for SACD and DVD-Audio playback.


Ever the show-off, OPPO even supplies a remote with a backlight to help you find the right buttons in the dark. But to be honest, the button placement is so well thought out that you can mostly use it without looking anyway.

The BDP-831 continues to amaze when it’s time to load a disc – Spider-Man 3’s first video screen appeared in 29 seconds, making this the fastest Blu-ray player we’ve come across. We’re also hugely impressed by the BDP-831’s picture quality, which gives our current midrange favourites from Pioneer and Panasonic a real run for their money. We plunged it right into the deep end with the Silicon Optix test disc and it produced a nigh-on flawless performance, tracking the movement of rotating bars smoothly without stepping along edges, and locking down the Video and Film Resolution test patterns without strobing, flickering or other such nastiness.


Next in the tray was The Dark Knight and the OPPO treats the superhero epic with the respect it deserves. Shots of Gotham are lavished with rich, forceful blacks, terrific shadow detail and clean, crisp lines. Fantastic detail retrieval gives the image irresistible punch and lucidity, the sort of artefact-free sharpness that’ll make your jaw drop as soon as Chris Nolan’s camera starts moving towards the skyscraper in the movie’s opening scene. 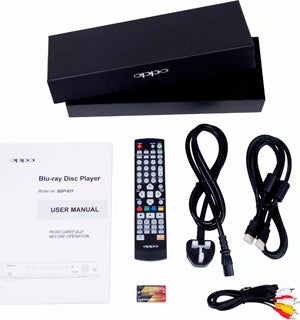 It also nails the movie’s testing colour palette, reproducing the vivid hues of Joker’s clashing clothes with plenty of depth and accuracy, while delicately shaded skin tones look almost life-like. There’s the slightest hint of noise in some areas of the picture that the noise reduction modes don’t pick up but nothing that’ll greatly affect your enjoyment – in every other respect the OPPO is an awesome picture performer.


That also applies to upscaled DVD pictures, which look sharp, clean and radiant, and if your TV supports it you can even convert them to 24Hz. As a run-through of our HQV disc confirms, it’s right up there with the best DVD upscalers we’ve tested and is yet another string to the OPPO’s bow.


Musically, the BDP-831 is obviously at its best with an SACD or DVD-Audio disc in the tray. Through the analogue outputs, it injects plenty of drive and detail into I Can’t Stand Losing You by The Police on SACD, and a variety of Japanese jazz tunes on DVD-Audio sounds sublime. But CDs also scrub up nicely, getting a warm and well-balanced treatment.


Using the same multichannel outputs, the OPPO masterfully orchestrates The Dark Knight’s Dolby TrueHD soundtrack. Rear effects are direct and precisely steered; while effects from the front channels are delivered with plenty of bite and dialogue is suitably velvety.


With OPPO’s European arm recently relocating to this country and a new UK online store about to go live, the company is looking to raise its profile among British buyers – and the BDP-831 is the perfect way to do so.”


That’s because it’s one of the finest Blu-ray players on the market. Its feature list is unparalleled, particularly at this price, and it’s supported by stellar AV performance, terrific build quality and lightning-quick disc loading. For these reasons it’s arguably an all-round better player than the Pioneer BDP-LX52 or the Panasonic DMP-BD80, which is really saying something.