What is the Oomph Coffee Maker?

Good coffee on the go isn’t always the easiest thing to come by, but the Oomph Coffee Maker, featured on Dragon’s Den, could change that. This clever coffee maker brews into a cup that you can take with you. And, it’s not just for those on-the-go, as it can easily replace a cafetiere with one, too.

The Oomph Coffee Maker looks and feels like a sizeable portable coffee cup, measuring 230 x 83 x 83mm and weighing 613g. In many ways, this is precisely what it is. Made from chunky plastic, the Oomph Coffee Maker has a reassuringly tough feel to it, and it seems like a product that will withstand being carried around with you. You can buy the machine in Black, Red and Blue, and there’s a more expensive transparent version, so you can more clearly see the brewing process in action.

It has a screw-top lid, with a lift-up flap so that you can drink directly from the Oomph Coffee Maker. Just make sure that the lid is screwed on tightly to prevent any leakage. 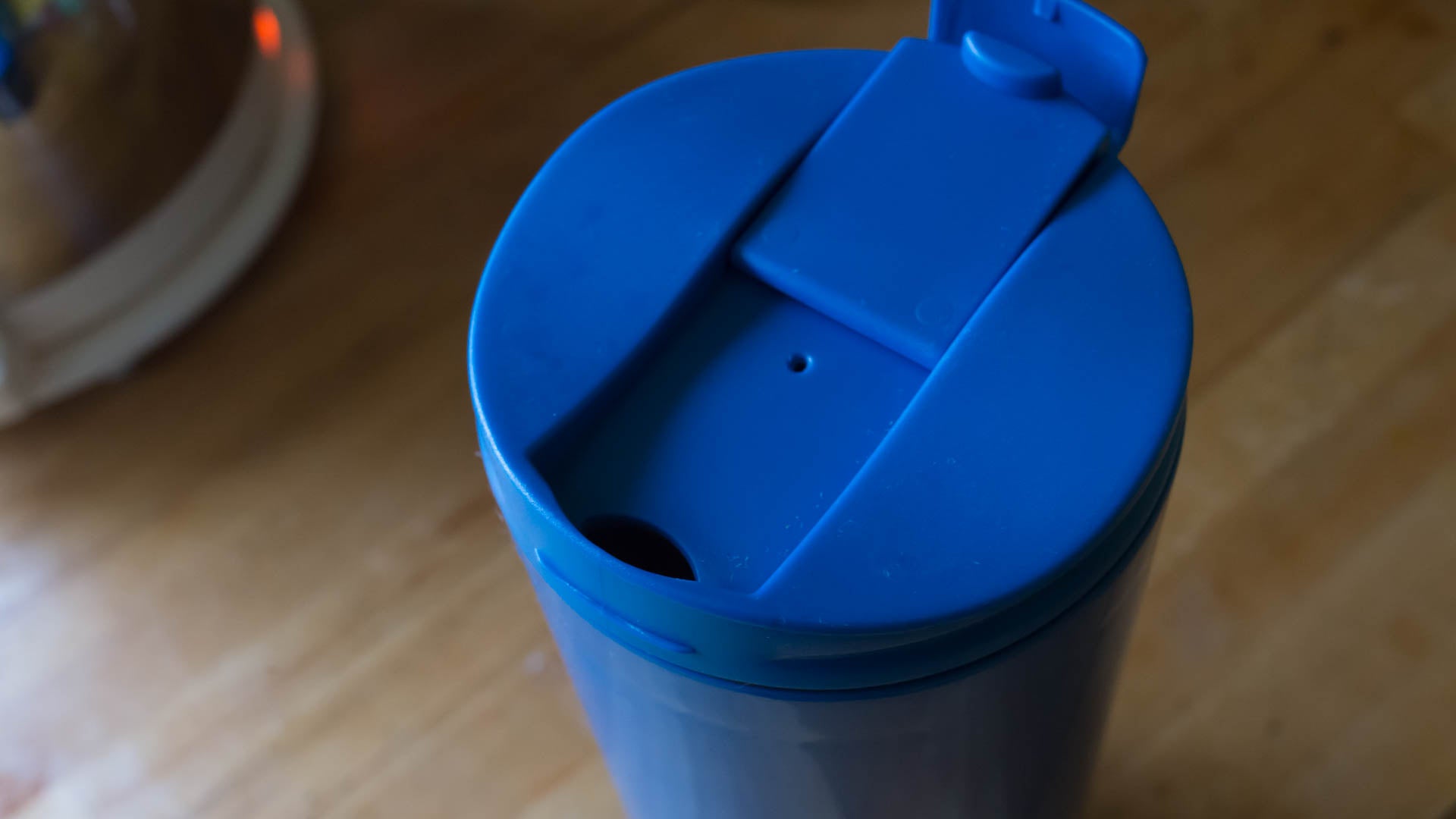 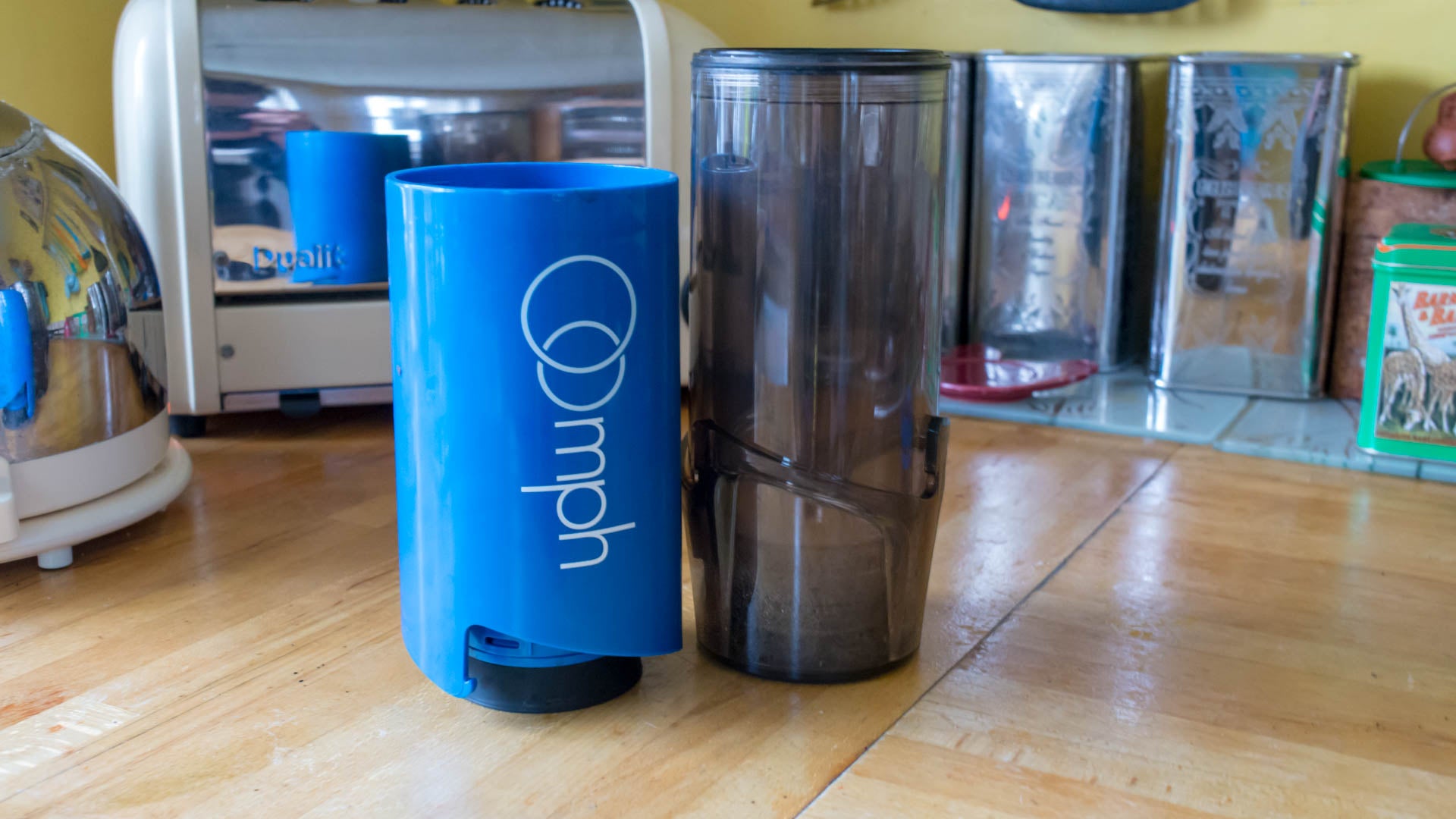 The system pulls apart easily, yet locks together tightly enough that you don’t have to worry about it separating when in use.

Using the Oomph Coffee Maker is very similar, at first, to using a cafetiere. You put your ground coffee (a mid-to-coarse grind should do the job) in the inner chamber, where it sits on the mesh filter. Oomph recommends using 24g per full Coffee Maker, although you can adjust to taste.

Next, you just fill with water; ideally, you should use water below boiling temperature (coffee boiled is coffee spoiled, you know). You should leave the coffee to brew for between one and two-and-half minutes, depending on taste. 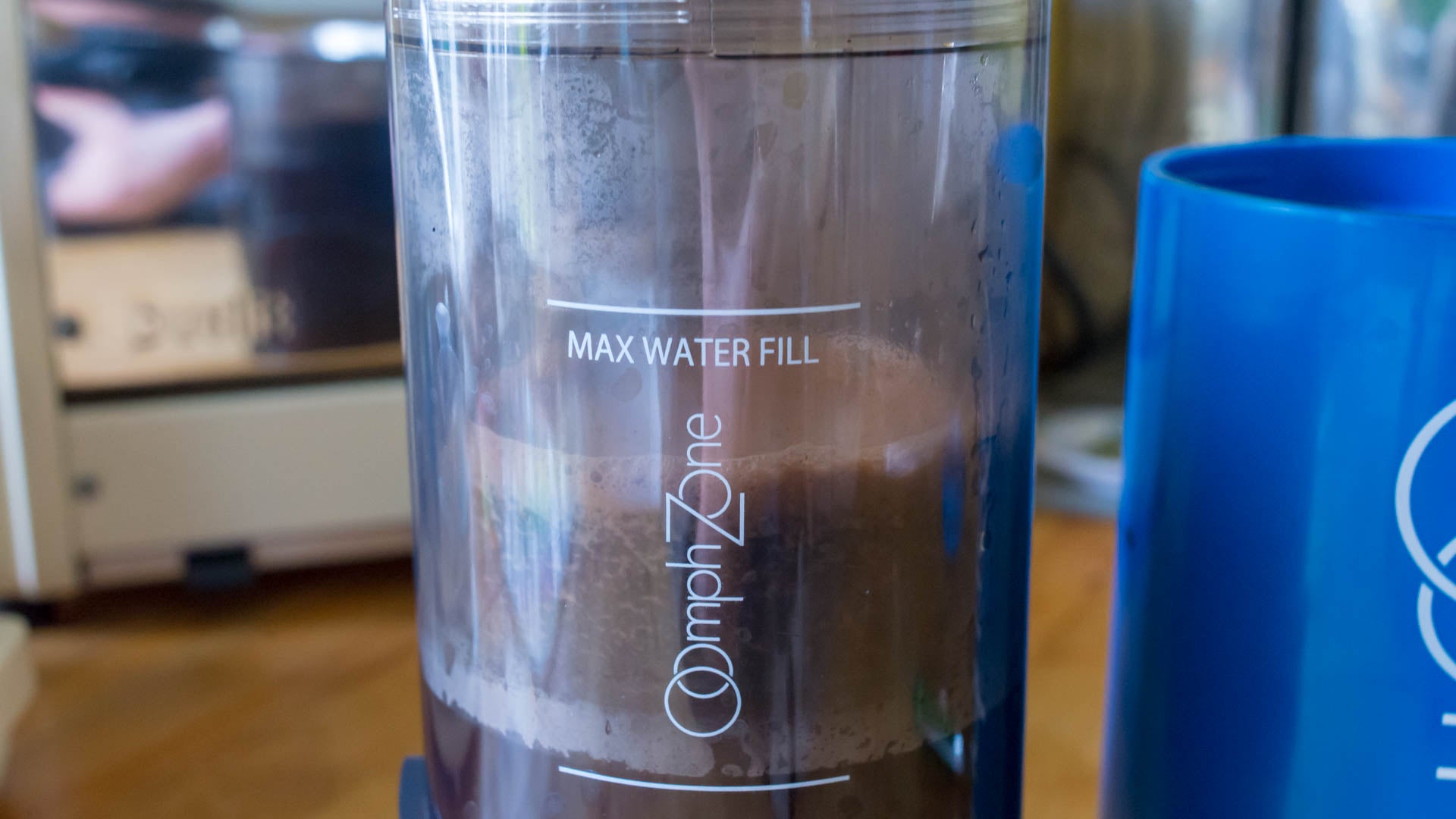 Next comes the clever bit. You fit the outer case on and push down. This slides the rubber plunger down and into the grounds, which can’t pass through the mesh filter. Water is forced through the coffee grounds, up the outside of the inner chamber and into the outer chamber. Water passes through a turbine on the way, which stirs and mixes your coffee. 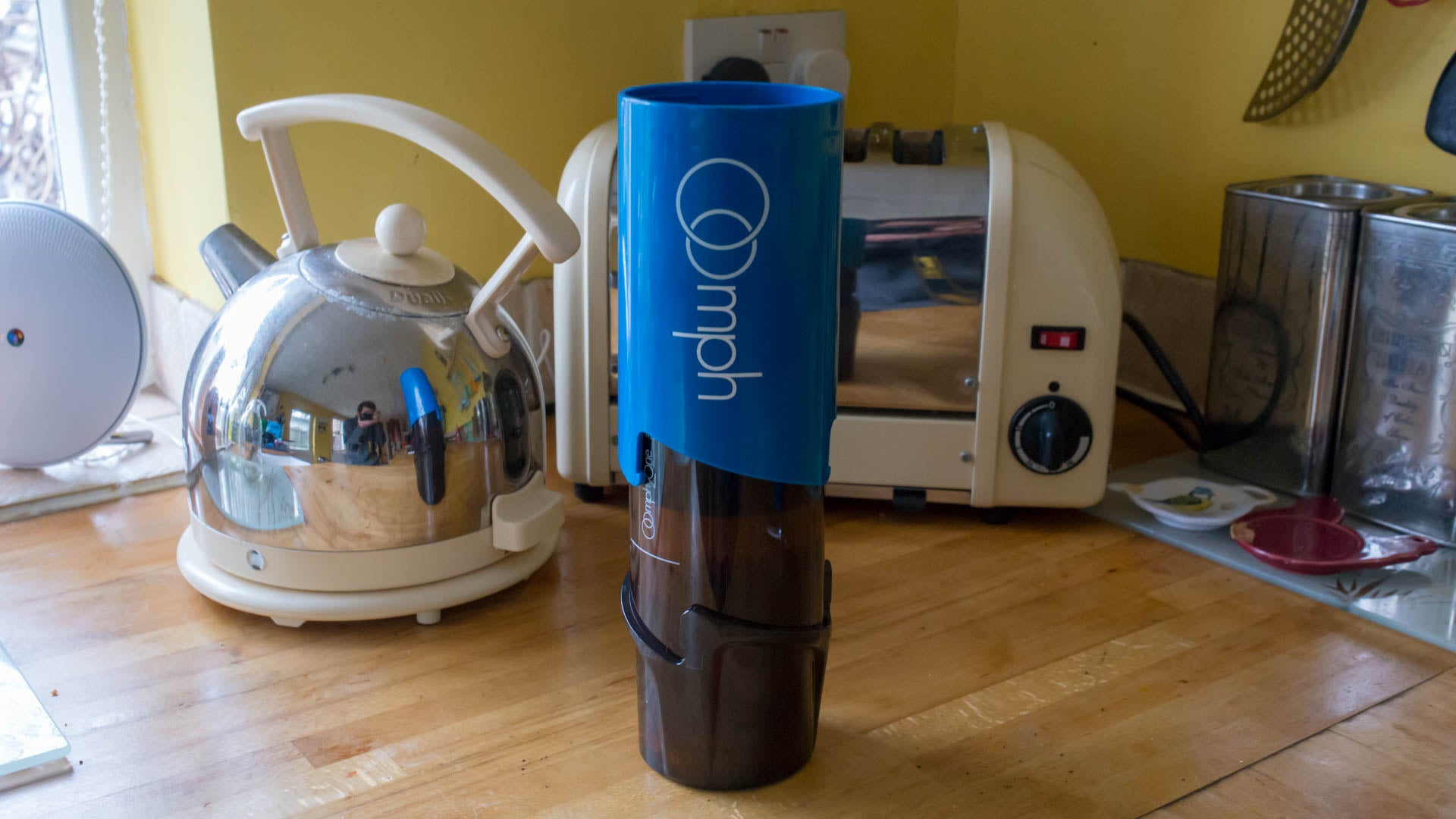 The result is that you have an inner chamber of freshly brewed coffee, which is no longer in contact with coffee beans, so it won’t get bitter even if you leave it for a long time.

The Oomph Coffee Maker brews in a different way to most machines. The closest comparison would be with drip machines or cafetieres, but the Oomph outshines all of them. My test coffee had a smooth, rich and deep taste to it, with the subtlety of the beans preserved. The Oomph really does produce an exceptional cup of coffee that’s quite different to that from any other machine. Certainly, I’d happily replace my cafetiere or drip machine with this system. 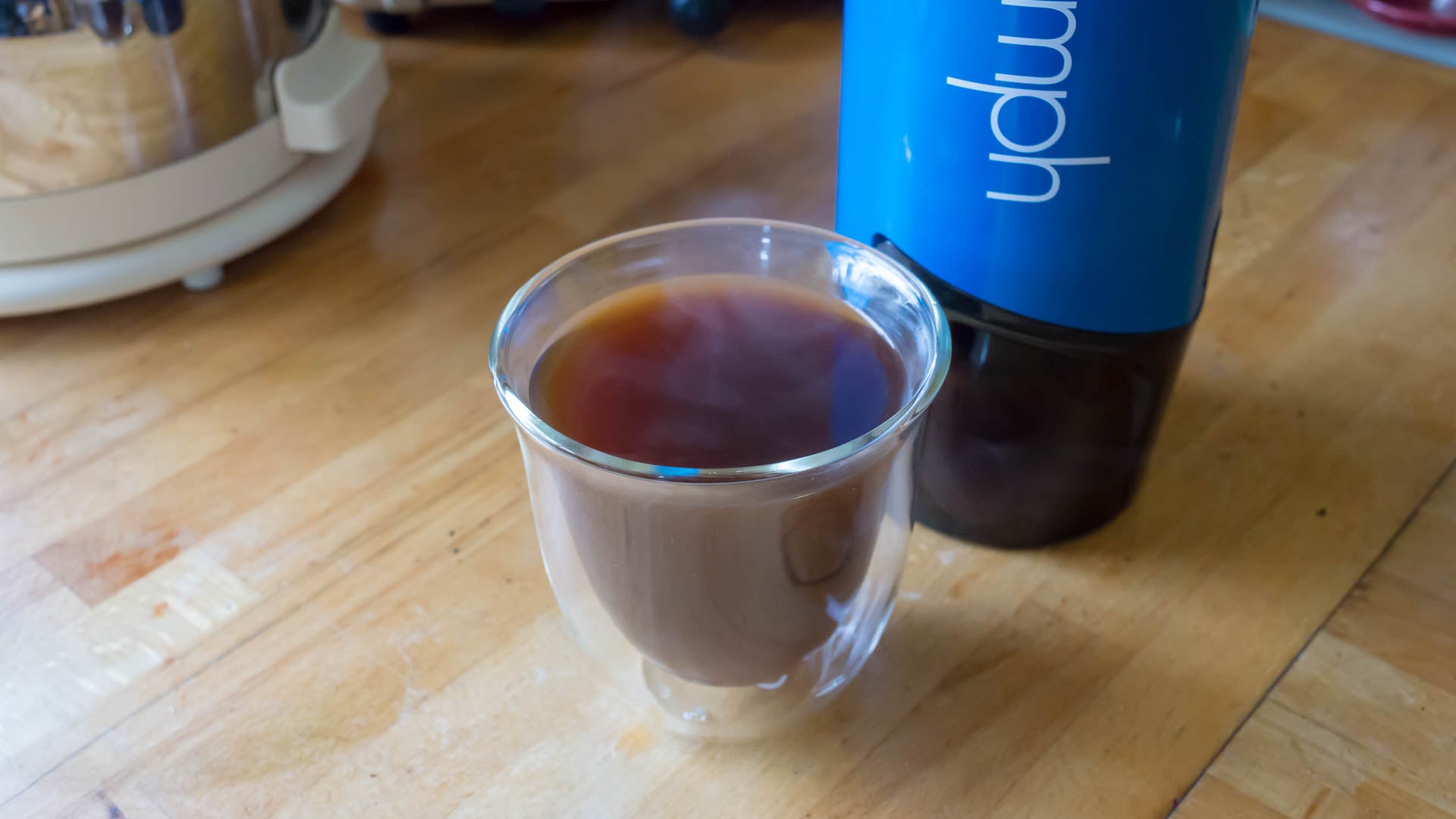 And the taste is the same from the first sip to the last, thanks to the separation of coffee and water. Cleverly, if the taste isn’t quite right for you, you can just pull the outer chamber up again and repeat the process, rebrewing your coffee.

The one downside of the system is that the Oomph Coffee Maker isn’t that well insulated, and cools down relatively quickly. If you plan to take coffee on the go and drink it slowly, you may still be best decanting your brewed coffee into a thermal cup.

Cleaning is exceptionally easy. Thanks to the force of the plunger and the removal of all water, the used coffee grounds are compressed into an almost espresso-like puck that you can just tip into the bin. A quick rinse out and you can use the Oomph Coffee Maker again or, for a deeper clean, the entire thing can go into the dishwasher. 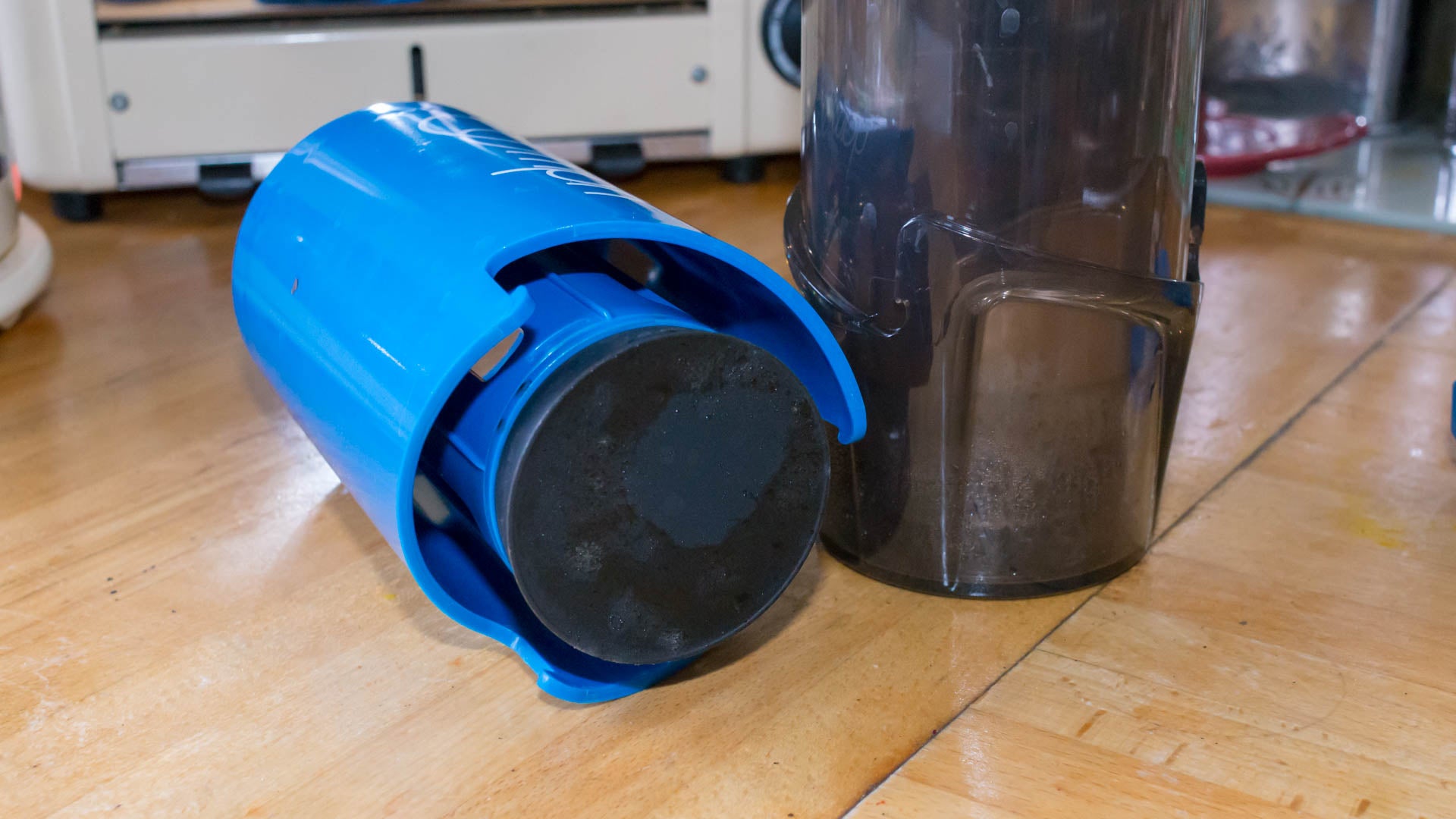 There’s a chance that some coffee grounds will make it through the mesh. Fortunately, you can unscrew the filter and remove the turbine, giving both a good clean. This process should be done regularly to prevent any blockages and keep your coffee tasting as fresh as possible.

Oomph says that the filters should last for 1,000 brews, and recommends soaking them in lemon juice for an hour to remove any staining.

Why buy the Oomph Coffee Maker?

If you’re looking for a different style of coffee or typically drink cafetiere or filter coffee, the Oomph is something of a revolution. Its ability to produce such smooth and tasty coffee in just a couple of minutes is really rather impressive. And, it’s great value, too. The only thing that could be improved is if coffee were kept warmer for longer.

A smart new way of making beautifully smooth coffee in just a couple of minutes.