OnLive is the first convincing remote gaming service we’ve tried. It lets you play high-end computer games on smartphones and tablets, as well as on PCs or your TV – with the help of the OnLive MicroConsole – over Wi-Fi.  However, as well as it may work, playing DiRT 3 on a touchscreen is a nightmare. Enter the OnLive Universal Controller, a gamepad designed to work across all the platforms OnLive supports and make playing games feel much better.

Design
The key design inspiration for the Universal Controller is quite clear. It looks and feels quite a lot like the Microsoft Xbox 360 Official pad, opting for the slightly heavier, chunkier feel than the lithe, lightweight style of the PS3 Sixaxis control pad. 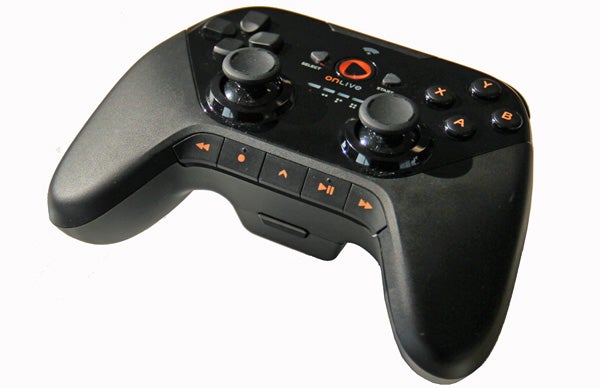 Intended to cater for games that appear on these platforms too, it has to cover all the button bases. There are four A/B/X/Y buttons on the front, a four-way D-pad and two analogue sticks to take up the majority of control duties. The one slightly weak point is the D-pad, which lacks a little definition. But the more important analogue sticks are great. They offer a well-judged level of resistance and lightly rubberised top surfaces that give them a feeling of quality and strength while making quick actions possible. 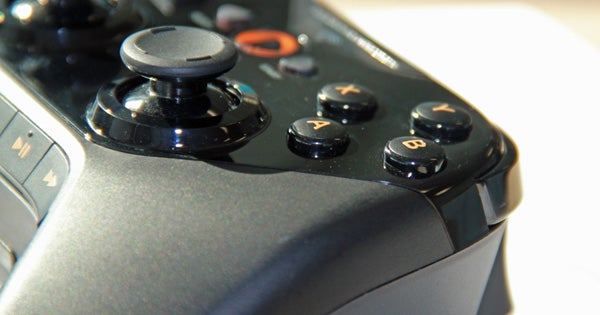 Other standard gaming controls include start and select buttons up front and two shoulder buttons for each side. Ergonomically, it’s not quite as good as the controllers of the big two, but it’s a cut above most third-party pads and feels rock-solid. There’s no creakiness and the plastics feel thick and hardy. At £40, we’d expect nothing less, but it helps to reaffirm that OnLive wants to be a viable alternative to console gaming. Rather than a gimmick. 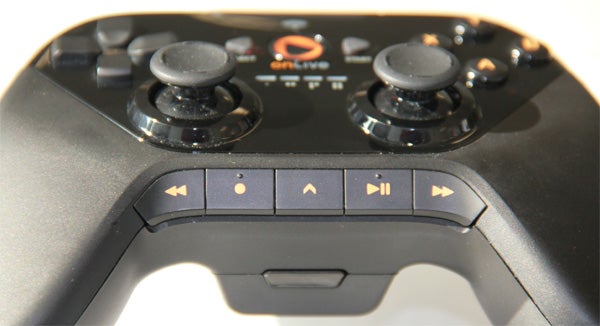 Below the standard gaming buttons, the OnLive Universal Controller features a row of playback controls. These are used to control the replays and viewing of other people’s games within OnLive.

Battery life
The controller’s power works – unsurprisingly – just like the Xbox 360’s. There’s a removable power pack on the back, and both a rechargeable unit and an empty one that holds two AA batteries (included) are supplied. To charge-up the supplied battery, you need to cable into the microUSB slot on the top of the controller, plugging the other end of the cable into either a USB adapter or powered USB socket. No USB power plug is included, but if you’re using OnLive it’s likely you have more than a few powered USB sockets nearby. 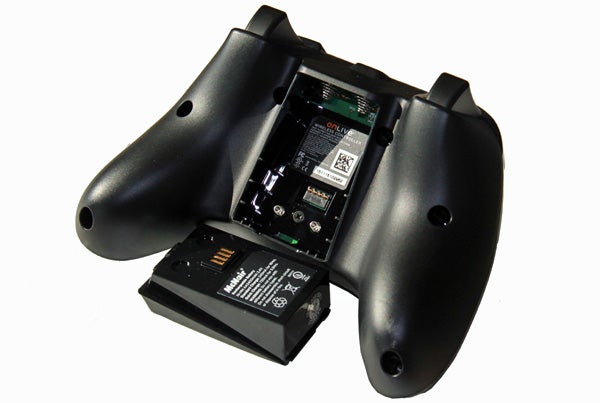 The battery lasts for up to 36 hours and takes 4-5 hours to charge fully, on par with an official Xbox 360 or PS3 pad. The one other accessory included in the box is the wireless adapter dongle. For tablets and smartphones, you don’t need this, but it’s a must for any computers without Bluetooth built-in, or the OnLive MicroConsole. Although the Universal Controller looks just like the wireless controller supplied with the MicroConsole, it’s actually different, using another method to stream your control inputs to the system.

Tablet and smartphones
The OnLive Universal Controller is most useful for Android tablets and smartphones, because PCs can already use a variety of controllers with OnLive, including the Xbox wireless controller for Windows. And that’s cheaper than this one.

Setting-up the controller with a smartphone or tablet is much like setting up any other Bluetooth device. You press the central OnLive button and one of the playback keys together to enter it into pairing mode, then search for it within the Bluetooth menu of your smartphone or tablet. As long as it’s compatible, the two will pair up and the controller will automatically start working within the OnLive app. A four-LED display on the front of the pad tells you whether it’s setup as controller 1, 2, 3 or 4.

However, compatibility is not as good as we had at first hoped. Most Android Honeycomb devices will work just fine, including some not listed in in the official compatibility list. But anything earlier than Honeycomb won’t work. We tried the controller with a number of 2.x Android phones, and while they would pair up well enough, they wouldn’t actually connect.

You really need an Ice Cream Sandwich 4.0 device for the Universal OnLive Controller to work properly. In 12 months, this won’t be such an issue, but it all-but decimates its usefulness with smartphones at present.

It may be argued that OnLive is of limited use on the 3-4in screen of phones, but not working with Android 2.x also rules-out using many tablets that would partner-up well with the service. Owners of the original Samsung Galaxy Tab, HTC Flyer, Archos 101 and other budget tabs should take note. The OnLive app is yet to be approved on iOS, so iPhones and iPads are still out in the cold. Also, while the controller has a rumble function, none of the games we tested on-tablet made use of it.

PCs
To talk to desktop PCs without Bluetooth built-in, OnLive supplies a USB dongle with the Universal Wireless Controller. The sync process is remarkably similar to using standard Bluetooth, though. 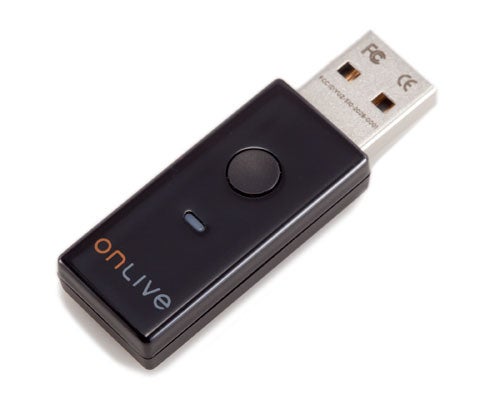 You plug the dongle into the computer, press the Onlive and playback buttons on the controller to enter pairing model, then press the sync button on the dongle to get that to do the same. Simple.

In Use
In testing with both tablet and PCs, we didn’t notice any interference caused by Wi-Fi, which uses the same 2.4GHz bandwidth as Bluetooth. However, using a traditional gamepad like this does highlight the slight lag inherent in OnLive. How much it intrudes depends on the quality of your connection and the type of game you’re playing. 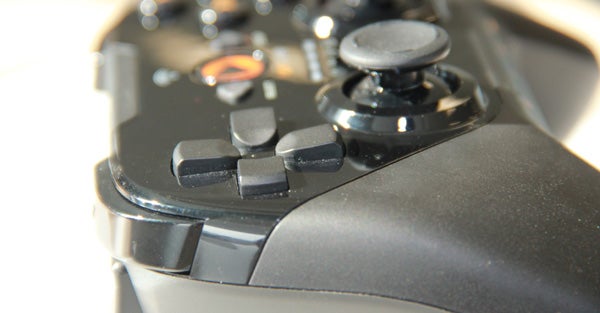 In our full OnLive review, we used DiRT 3 as a benchmark game – as something very unforgiving of lag and drops in video quality. Here, the lag was intrusive and made us long for a PS3 and game disc. But none of this is the Universal Controller’s fault, and slower-paced games fared just fine. We noticed no drop-outs in the connection between our test tablet and the controller.

Value
There’s no getting around it – at £40, the OnLive Universal Controller is not cheap. It’s as expensive as the Sony PS3 Sixaxis pad and almost twice the price of an Xbox 360 wireless controller. Perhaps more notably, it’s not all that much cheaper than an OnLive MicroConsole, which comes with its own – if different, and less flexible – wireless controller.

However, this accessory is what brings OnLive to life for its more dynamic, and useful, purposes. For playing in hotel rooms on a tablet, it beats using touchscreen controls hands-down, and you do get the dongle included too. The economies of scale rule is taking an effect here too – as OnLive is producing controllers on a much smaller scale than Microsoft, they’re naturally going to be more expensive to produce per unit.

For OnLive fans who want to take their streaming experience to the next level, the Universal Wireless Controller is an essential buy. But it’s not without significant problems. The lack of Android 2.x may not be entirely OnLive’s fault – it’s related to how the OS treats the Bluetooth stack – but ensures that this controller isn’t quite as universal as it might at first appear.

Verdict
Excellent build quality and ergonomics make the OnLive Universal Controller the only way to play if you want to stream console games to your Android tablet. However, it’s not cheap, lacks support for almost all Android phones at present, and highlights the lag of Onlive’s streaming with faster-paced games.