In the course of testing TVs over the past few weeks, it’s struck us that some of the main TV brands have introduced some fairly major upgrades to their online TV services. So we thought it was worth presenting a run-down of what’s new in the fast-changing online TV world.

As well as sharpening up the front end of its NetTV online service, Philips has introduced lots of extra content in the past couple of weeks. The most intriguing new discovery is the ‘App Gallery’. Previously Philips hadn’t shown any particular signs of going the App route (even though many of the services we’ve discussed in earlier features were, essentially, apps), but it’s now clear that it feels that organising and offering extra content via the app model is the way ahead.


There’s some interesting new stuff you can opt to add to your online functions via the new App Gallery, too. First there’s the CineTrailer app, which lets you watch trailers of all the latest films coming out at the cinema or on home video. This is sourced from France, but the trailers appeared in English, with respectable video quality. 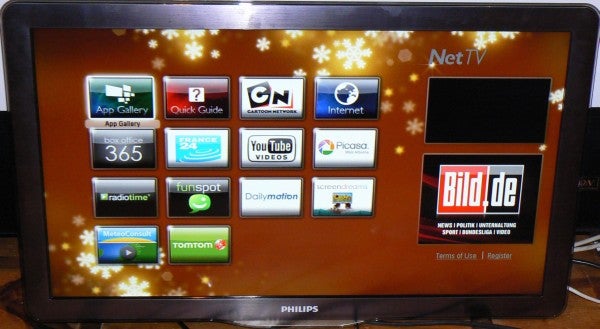 There’s also an app for the Foreca weather service, offering global coverage, and rather more interestingly an app for buying stuff on eBay. This doesn’t just dump you into a browser either, but rather provides a rather streamlined way to navigate and use the eBay site via your TV.


Also well worthwhile is the tunin.fm internet radio ‘server’, and an app for using Twitter via your TV. Wrapping things up on the interesting new app front are online photo storage site MyAlbum and iConcerts, which offers streamed footage from archived concerts. You do generally only get a single song from each concert though, so the service seems more of an advert for the full online iConcert website rather than a true service in itself.


Another new ‘app’ deemed so useful that it’s automatically presented on the new NetTV Home page is TomTom. Although this is a little tortuous to navigate around, it’s actually pretty phenomenal in terms of how much information it presents about the ongoing state of traffic round the UK. Also impressive is how up to date the information appeared to be during our time checking the service. 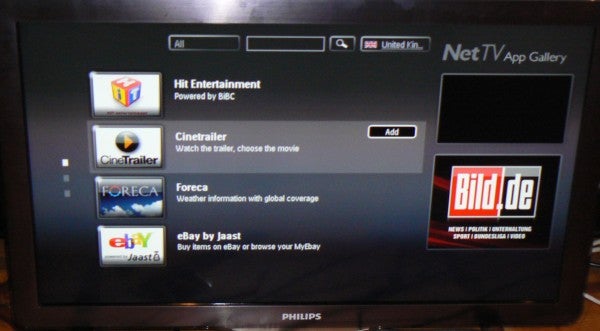 Elsewhere, Philips has even improved the front end of its Opera open Web browser, making favourites easier to get to.


One final new app worth mentioning is an interactive tutorial designed to help you get the best from the Philips TVs. This seems very worthwhile, actually, given that one of our main complaints against Philips’ frequently excellent TVs is that they can be pretty tough to get the best out of.


We should say that the new NetTV platform seemed a little unstable during our tests, suffering a few crashes and ‘error’ messages. But these issues will doubtless be ironed out over time. We hope.

Since our previous look at online TV services, the BBC iPlayer has, as we predicted back then, gone live on Sony’s Bravia Internet Video platform. And it works very well, too.


However, there are also two further significant additions to what was already an excellent online service: Sony’s own Qriocity platform, and Sky News.


Qriocity lives up to its name at first glance. For it’s essentially a Video On Demand service enabling you to pay to download films. This isn’t odd in itself, but it does look a little bizarre when you consider that BIV already carries LoveFilm. Does a single online platform really need multiple film rental services? Especially when the newest platform only offers a quite limited amount of content? 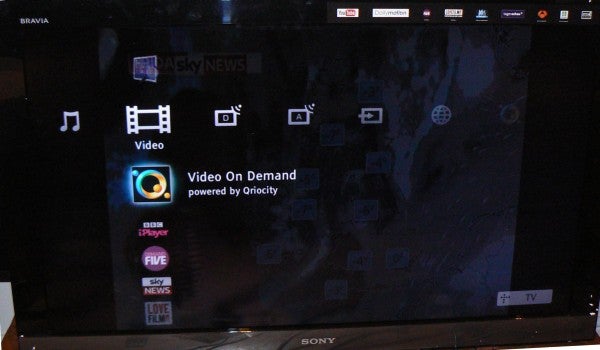 Maybe. For it turns out that Qriocity justifies itself thanks to its pricing structure. LoveFilm uses a monthly subscription pay model, while Qriocity lets you ‘pay per view’; as in, you only pay for what you watch. So if you only imagine wanting to occasionally watch a film rather than watching films regularly, Qriocity could fit the bill. That said, it did seem to us that the service’s prices were rather high.


The new Sky News ‘app’ is simple but effective. Firing it up produces four boxes labelled Headlines, Top Story, Showbiz, and Weather. So obviously you just the option you want, from where you’re taken through to a video show related to the option you chose.


The footage in these sections has been specially shot and modified for the app; you don’t get simple re-runs of the live coverage from the Sky News studio. 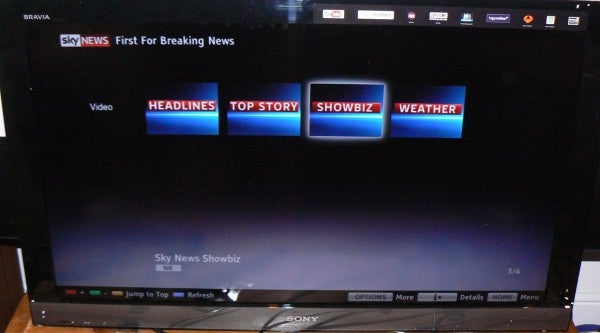 The videos play in a constant loop, so you don’t always join them right at the start. But with this in mind they’ve been kept short, so you don’t have to wait long for the start to come round again.


News coverage was the one thing that wasn’t great about BIV before, while its interface feels a touch clunky, the addition of Sky News is overall very welcome.


The addition of two new services to the BIV offering has really started to make Sony’s interface creak under the strain, though. Just listing everything in a scroll down menu within the TV’s general menus once seemed like a great idea, but now it’s making looking for online content a chore, and harming the chances of content relegated low down the list ever being spotted.

Last time we reviewed an LG TV, its NetCast online platform was frankly rubbish. It only had YouTube, Picasa and some boring weather forecasting service.


Just as well, then, that LG has finally added quite a bit of NetCast content over the past couple of weeks. Especially as a little of this new content is actually useful.


Once your NetCast-compatible LG TV has done its necessary update download, the once hilariously spartan service main menu screen suddenly looks bristling with things to check out. 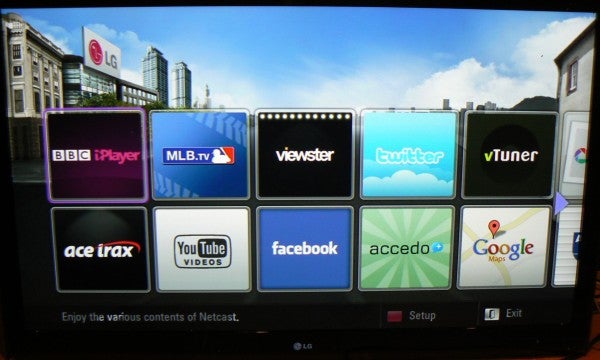 Scanning along the bold, colourful set of service icons, the new services pan out like this. First up and without doubt the most important is the BBC iPlayer. This catch up service has single-handedly woken the great British public up to the idea of online, on-demand TV, and as such has become the one online service above all others that people like to see residing on any online TV’s service list.


What’s more, LG’s iPlayer iteration is arguably the best we’ve seen in terms of its presentation and ease of use.


Next on the list of new additions is Google Maps – which is about as useless as the iPlayer is useful. For a start it defaults to America. But even once you’ve zeroed in on where you live, its interface and general presentation level are both pretty ropey. We guess at a push you might use its route finder, but you’ll probably quickly go back to using the Internet on your PC – or just using a sat nav! 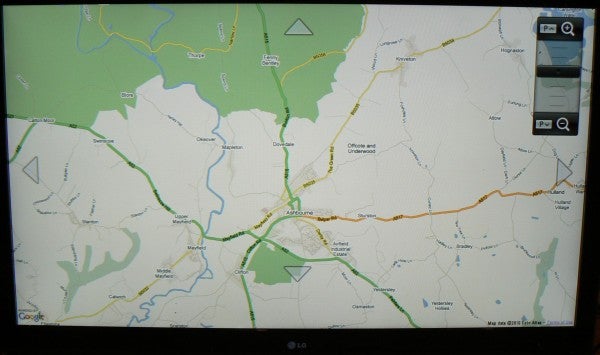 The vTuner app up next is much more welcome. For as its name suggests, it offers a pretty straightforward, very usable ‘channel’ for filtering down and listening to the thousands and thousands of Internet radio channels out there. It was pleasing to discover that its ‘Editor’s picks’ and other highlighted content were UK specific. The sound quality isn’t up to much – but then it is Internet Radio, after all!


Social Mediaphiles, meanwhile, will be unfeasibly excited to find that both Twitter and Facebook have been added to the NetCast content list. And baseball fans will probably be even more excited to discover the subscription MLB.tv baseball ‘channel’. This claims, rather terrifyingly, to shows all 2,430 regular games in the USB MLB season. Pity, then, that baseball is hardly a UK obsession…

Of potentially greater interest to typical UK users will be the last three new services: Accedo, AceTrax and Viewster.


AceTrax is familiar from its appearance on Panasonic’s VieraCast online TV platform, and essentially lets you rent or buy films on demand. If you buy one, it’s stored on a remote Internet ‘cloud’ so you can downstream and watch it whenever you wish. 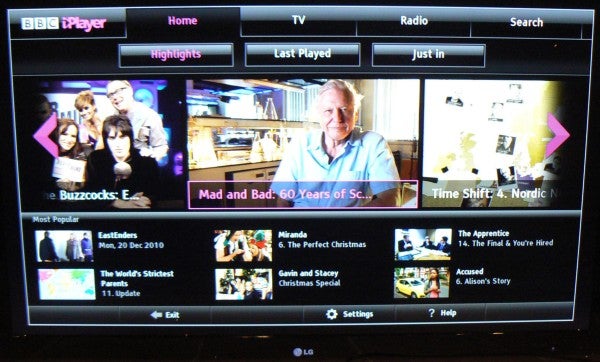 Accedo turns out to be an online gaming service. At the time of writing six games were available, including Sudoku and Mahjong Fruit.


However, while the monthly sub doesn’t look too damaging at £7, the content was bizarrely obscure. We like to think we know quite a bit about films and telly shows, but we hadn’t heard of a single one of the limited number of (doubtless straight to video) films and shows available via Viewster. Weird.


The arrival of so much new content to online TV services at the end of 2010 surely highlights just how big this area of a TV’s performance will become in 2011.


It also shows that the TV you buy in January might be quite different by June in terms of it online functionality – without you having to pay a penny for the improvements. Turning on your TV every day might actually become an exciting experience, as you see what new features have been added. Well, maybe ‘exciting’ is stretching things, but you know where we’re coming from.


It’s a pity, though, that the quality and relevance of some of the content being provided really is questionable. There’s definitely a feeling with LG’s new NetCast efforts, for instance, that some of its stuff has only been included to ‘make up the numbers’. It’s just content for content’s sake.


Hopefully this will change in 2011, with manufacturers becoming brave enough to pick and choose their content better, ditching the pointless things and the stuff that just doesn’t work via a TV interface.


The reams of new content is also starting to make some of the interfaces being used for the online platforms seem seriously unwieldy. So we’re sure we’ll see some big changes in this area too through the course of the next 12 months.