Onkyo’s TX-SR607 was the best-selling AV receiver of 2009 and understandably so – not only did it deliver knockout sonics for a reasonable price, but it was also stuffed with cutting-edge features like Dolby Pro Logic IIz, which made its world debut on the SR607. This year Onkyo has replaced the SR607 with the TX-SR608, a similarly feature-heavy model with a few crucial upgrades, the most significant of which is 3D support.

Looks-wise very little has changed, but that’s no bad thing given the SR607’s living-room friendly design and outstanding build quality. The TX-SR608 shares the same sleek black (or silver) finish and busy fascia, which includes an easy-to-read display panel and a row of buttons discreetly concealed in a groove running the width of the unit. These govern sound modes, while the buttons below control input selection. As ever, a massive volume dial can be found on the right hand side.


Unlike Onkyo’s higher-end models, the lower section isn’t covered by a flap, so the headphone jack and auxiliary inputs are always exposed. These include an HDMI input, composite/analogue stereo input, 3.5mm line input and a plug for the setup mic.


Rear connectivity is superb. The biggest talking point is the provision of five HDMI 1.4 inputs, which makes the TX-SR608 well and truly ready to receive 3D signals from Blu-ray decks and pass them onto a compatible display via the HDMI output. The HDMIs are all clearly labelled by device (BD/DVD, Game, PC etc) and can be easily assigned in the setup menu. Of course, they also support the Audio Return Channel feature, plus HD audio bitstreams, multichannel PCM, Deep Colour, x.v.Colour, DVD-Audio, SACD…you name it, they handle it.

Further video connectivity comes in the form of two component video inputs (plus one output) and five composite video inputs (one output). Audio sockets include optical and coaxial audio inputs (two of each), six analogue inputs and two outputs, one of which is designated for Zone 2 use.


Unusually you’ll also find an analogue RGB input, which makes it easier to rig up a PC or laptop and play games on your living room TV. It’s joined by FM/AM antenna inputs, Onkyo’s RI (Remote Interactive) remote control port and two parallel subwoofer pre-outs – these allow you to bulk up and balance the bass output in larger rooms. Speaker connections are banana plug compatible binding posts, colour-coded for your convenience.


Completing the line-up is Onkyo’s Universal port, which allows you to add one of the company’s optional DAB+ tuners or iPod/iPhone docks. The UP-DT1 DAB module can be found online for around £110 while the UP-A1 iPod dock will set you back around £50.

As for the inside, the key specs look encouraging. It’s a 7.2-channel receiver offering a quoted power output of 7 x 160W and THX Select2 Plus certification, making it suitable for rooms up to 56 cubic metres in size. That’s quite an accolade too – Onkyo reckons this is the first receiver in its class to don the THX Select2 Plus badge.


As is normally the case with Onkyo’s midrange machines, the feature list is so lengthy we’d need a week to get through everything. But highlights include Dolby Pro Logic IIz processing, which is now joined by Audyssey DSX – both of which let you expand the soundstage upwards as well as outwards by reconfiguring the surround back channels as front height channels.

Whether or not you need two modes that essentially do the same thing is a moot point but Onkyo has bunged them both in anyway and choice is always a good thing, right? Actually, there is one big difference – Audyssey DSX can additionally create front width channels that make the front sound field seem even more expansive.


These are backed up by Audyssey 2EQ, which checks the acoustics of your room at three listening positions (using a supplied microphone) and adjusts the sound accordingly. Dynamic EQ then maintains these sonic properties at any volume, while Dynamic Volume keeps sudden volume changes to a minimum.


The TX-SR608 will also decode any HD audio format, and when you combine that with the bevy of other DSP and listening modes for movies, music and gaming, you have yourself a versatile audio performer. Digital to analogue audio conversion is handled by Burr-Brown 192kHz/24-bit DACs for every channel and the Jitter Cleaning Circuitry tidies up unwanted interference. 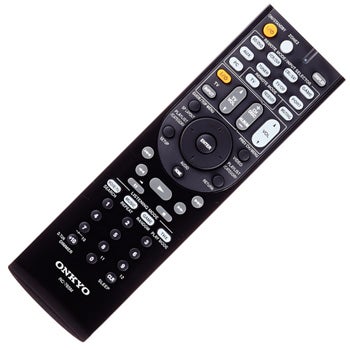 But it’s not only a whizz with audio – there’s also some serious video upscaling on board courtesy of the built-in Faroudja DCDi processor. You can up-res pictures to 1080p, which might come in handy if you’re not happy with the quality of your DVD player’s own upscaling circuitry. Pictures fed in through the component and composite video inputs can be upscaled and piped to a TV via HDMI.


Previous Onkyo AV receivers have been extremely easy to use, and the TX-SR608 is no different. It uses the same onscreen setup menu as previous models, using a straightforward list structure design with some attractive background graphics.


Here you’ll find a vast and detailed array of sound adjustments to cater for the needs of your speaker system, although if you use Audyssey 2EQ auto calibration, in theory you shouldn’t need to touch them.


There’s also a range of picture settings including Cinema and Game presets and a Custom mode that allows you to apply edge enhancement and noise reduction (although these can be bypassed using the Through setting).


What’s more, Onkyo has added a funky new menu that’s superimposed over the picture, making it even easier to access often-used settings. It’s a terrific new addition, enabling you to tweak most settings without missing a second of the movie. This, combined with the intelligently laid out remote, makes the TX-SR608 an absolute pleasure to use.

It’s also a pleasure to listen to. We loaded up ”Avatar” on Blu-ray and the Onkyo delivers effects, music and dialogue with incredible drive and authority, making the movie’s DTS HD Master Audio soundtrack feel epic in scale.


Particularly thrilling is the Battle For Pandora chapter, which is masterfully orchestrated by the TX-SR608. The soundstage is expansive and open, yet surround effects like distant gunfire, flashing arrows and the chop-chop-chop of helicopter blades are precisely placed, giving you a real sense that you’ve been dropped right into the middle of the chaos.

It’s underpinned by thunderous bass, best demonstrated by the floor-shaking stampede of Na’vi Dire Horses, but it’s deft enough to pick out subtler low-end sounds like the swoosh of banshee wings or the ambient rumble that accompanies tense scenes. At the other end of the spectrum, the Onkyo ekes out loads of crystal-clear high-frequency detail – lashing waterfalls, crumbling rocks and hissing banshees sound sharp and easy on the ears.


We accused previous Onkyo receivers like the TX-NR807 and to some extent the TX-SR607 of taking a sledgehammer-like approach to movie material, with a brash, overly aggressive sound that can leave you feeling like you’ve done 12 rounds with David Haye. What’s interesting though is that the TX-SR608 produces a smoother sound, which changes its character without compromising on dynamism. It still packs a hefty punch, but makes for a generally easier listen. This might not suit everyone – after all, some people like that sort of bite and aggression from their receiver – but we certainly liked it.


The TX-SR608 is a wonderful AV receiver, packing in as many features as possible for a very alluring price. Any receiver that gives you six HDMI 1.4 inputs, myriad listening modes, video upscaling and THX Select2 Plus certification for under £450 is great value in our book – and that’s even before we’ve mentioned the fantastic sound quality, which may be smoother than previous Onkyo receivers but still deserves the utmost praise.