After dishing out our award for Best Home Cinema Product of 2008 to Onkyo’s phenomenal TX-NR906, we were extra keen to find out what the company had in store for its next generation of AV receivers. And at the company’s recent press launch at Fawsley Hall, we discovered that the new range is shaping up to be even better than the last, boasting more mind-blowing tricks than a magic show.


A group of four budget to mid-range receivers is being launched this side of the summer, with a few high-end models due out later in the year. Heading up the first wave is the TX-SR607, a 7.2-channel receiver that musters a mighty 140W per channel and counts Dolby’s revolutionary new Pro Logic IIz processing among its generous features (for more on the latest range see Andy’s news story).

Our first impressions after pulling it out of the box are favourable if not mind-blowing. The black finish and boxy shape are par for the course, but Onkyo has made some practical improvements to the front panel arrangement of last year’s TX-SR607, making it a lot clearer and easier to use if you don’t have the remote to hand.


The improvements are subtle but effective – the display window is wider, the volume dial is larger and the setting buttons have been blended discreetly into the space just below the display window. Also on the front panel is a useful set of connections, including HDMI, composite and stereo audio inputs, a 3.5mm input for portable audio players, a headphones output and a port for the setup microphone.


Around the back the SR607 is teeming with connections, and it’s particularly generous when it comes to HDMI ports. There are no less than five v1.3 inputs (all of which support Deep Colour, x.v.Colour and Lip Sync) taking the total to six, plus the output passes 1080p video signals on to your TV – all of which is great news if you’ve got loads of HDMI-equipped kit but only a couple of inputs on your display.

The SR607 even sports video upscaling for standard-definition sources connected to the component or composite inputs, and although it only goes up to 1080i the on-board deinterlacing chip with Faroudja DCDi Edge enhancement should still ensure top-notch picture quality.


Finally, using the Universal Port you can connect optional Onkyo devices such as an iPod/iPhone dock (UP-A1) and a DAB+ radio tuner (UP-DT1). The nine pairs of binding posts are banana plug compatible and the surround back/front height terminals can be used for bi-amping speakers.

Moving onto the feature list, there’s loads to get your teeth into. First the basics – the SR607 decodes Dolby TrueHD, DTS HD Master Audio, Dolby Digital Plus, DTS HD, Dolby Digital EX, DTS-ES Discrete/Matrix and DTS 96/24. It also features a wide range of listening modes, including DTS Neo:6, which can be used in conjunction with DTS Surround Sensation to generate a virtual 5.1 surround effect from two speakers. There’s also a long list of Onkyo’s own DSP modes, including Orchestra, Unplugged and Theater-Dimensional. 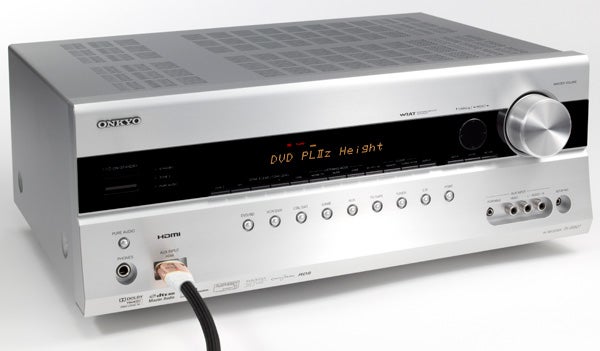 But the most significant of these listening modes is undoubtedly Dolby Pro Logic IIz, which makes its debut on this receiver. For those who are unfamiliar with the technology, a quick recap – it performs all the same tricks as Pro Logic IIx, delivering a multichannel surround sound effect from any source, but Pro Logic IIz adds a height element to the soundstage by directing the low-level, non-directional elements of the soundtrack (such as rain and other ambience) to the ‘front height’ channels.


To get the benefit of this, you’ll need to install a pair of speakers high up above the TV, either on tall stands or on the wall. It’s hardly convenient, but Onkyo reckons it’s worth the effort as it adds a convincing 3D effect that’s said to heighten the realism of movies and games without compromising the integrity of the source mix.


The technology is incredibly versatile and can be used with any source to generate a 9.1-channel soundstage with front height channels from stereo, 5.1 and 7.1 sources. It’s particularly useful for Blu-ray discs, many of which already feature 7.1 soundtracks – Pro Logic IIz simply adds the left/right vertical height channels. 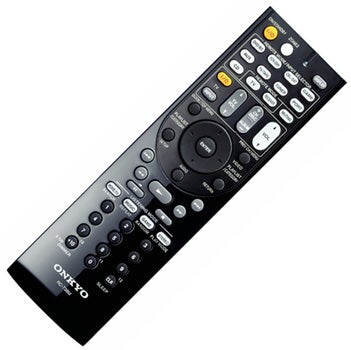 But a receiver full of features is one thing; making those features easy to implement is quite another. Thankfully, using the SR607 is a piece of cake thanks to two key factors – the excellent onscreen menus and the intuitive remote. The former is a masterstroke, using a basic but attractive graphic interface with options displayed in clear, simple lists – just like the NR906 in fact, except without the ISF settings. You can do everything from here, including input assignment and speaker configuration, plus the menu is replicated on the front display if you haven’t connected it to a TV – but that’s equally easy to use.


The gloss black remote, meanwhile, is surprisingly uncomplicated for such a multi-faceted machine. Onkyo has somehow kept the button count to a minimum without leaving anything out, and each section is clearly separated – in particular the input, sound mode and volume keys, which are easy to find at all times.

Initial setup is made simple by Audyssey 2EQ Room Correction and Speaker Setup, which uses the supplied microphone to measure the acoustic characteristics of your room and optimise the speakers accordingly. It takes measurements from three positions, making the process quite long-winded but it’s worth the effort. During playback Audyssey’s Dynamic EQ maintains these optimal audio properties at differing volumes, and it works in tandem with Dynamic Volume to rectify variations in sound levels between different sources. 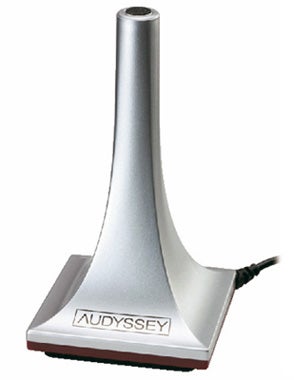 But the proof of the pudding is in the eating, and the SR607 is quite simply delicious, delivering outstanding sound quality with movies and music. We started our tests with ”Mamma Mia!” on Blu-ray and the Onkyo’s presentation of its DTS HD Master Audio track (fed as an HDMI bitstream from a Samsung BD-P1500) is detailed, evocative and packed with energy. The songs sound fast and punchy with full-bodied lead vocals, but when it gets to the talky bits speech is clear and open, while surround effects are crisp and immaculately steered.


And with ”Hellboy II’s” more testosterone-fuelled Master Audio track on Blu-ray, the SR607 dishes out more thrills and spills than a trip to Alton Towers. Hellboy’s climactic battle with the Golden Army is packed with taut, forceful effects like the blasts of Hellboy’s gun and the clanking metal of the titular army – all pinged into the room with aplomb. The SR607 also demonstrates some terrific bass work, mustering deep, resonant thuds as objects smash against walls, while the punches and clashing swords during Hellboy’s scrap with Prince Nuada sound sufficiently brutal. 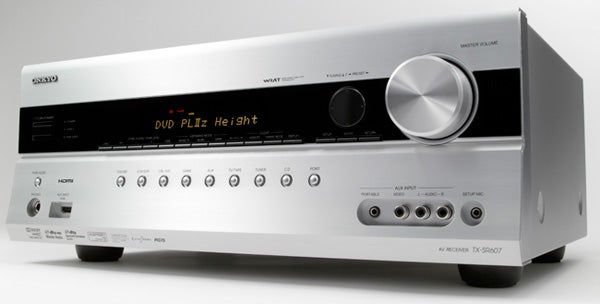 Next up we wanted to test out the effectiveness of Pro Logic IIz and for that purpose we fashioned a makeshift front height speaker setup and pulled the ”Saving Private Ryan” DVD off the shelf. We played the scene in which the team explores a demolished town in the driving rain, and the SR607 does a very convincing job of directing the ambient hissing effects to the height channels. Shots of Caparzo lying on the ground after being hit by the sniper’s bullet are lent an extra sense of scale and envelopment that you simply don’t get from a regular ‘flat’ setup, proving that Pro Logic IIz is a worthwhile addition to the features roster.


The SR607 also turns in an engrossing performance with music, in particular with our ”Frank McComb Live In Atlanta” CD. The drums are suitably tight and rhythmic; the delicate background percussion is relayed out with crispness, while McComb’s dancing Rhodes solos and soaring vocals are upfront yet easy on the ear.


Try though we might, the TX-SR607 is hard to fault. It delivers the sort of sparkling sound quality you’d expect from a receiver costing a lot more, while the feature list is similarly impressive – the highlights being Dolby Pro Logic IIz (if you can accommodate the extra speakers of course) and the inclusion of six HDMI inputs. But if you’re not already sold, then its ultra-simple user interface and all-round versatility should just about seal the deal. The 1080i upscaling limitation is the only thing that might make you think twice, but it’s a minor chink in otherwise magnificent armour.