Buying a Blu-ray player is no longer as expensive as it used to be, but pairing it with a home cinema system equipped to handle the latest sound formats might be a stretch if you’re on a tight budget. However, help is at hand in the form of Onkyo’s latest entry-level receiver, which gives you access to HD audio for a very affordable price.


Among the audio sockets are two optical and two coaxial digital audio inputs, four analogue stereo inputs and a set of colour-coded 7.1-channel analogue inputs that allow you to feed in decoded audio signals from Blu-ray, DVD-Audio or SACD players. Rounding up the rear selection is a subwoofer pre-out and Onkyo’s Remote Interactive jack, which allows you to connect and control other Onkyo kit (including the optional DS-A1 iPod dock), while on the front there’s a set of extra stereo audio and composite video inputs.


In terms of design, the TX-SR576 comes in silver or black, and the silver version looks pleasant enough, with slanting lines on the fascia, tidily arranged rows of buttons and a clear, bright display panel. All of the crucial settings and listening modes can be accessed from the front panel, which helps when you don’t have the remote to hand.

Despite the low price, Onkyo has still managed to pack the TX-SR576 full of impressive sonic technology. The unit musters 130W per channel and uses Wide Range Amplifier Technology (WRAT), which uses a low negative feedback design, closed ground loop circuits and high instantaneous current capacity to deliver clean, undistorted sound even at loud volumes. Cinema Filter helps deliver movie soundtracks with the correct tonal balance for home cinema setups and stops them sounding too bright. And if you’ve only got two speakers connected, the Theater Dimensional circuitry generates surround sound from two channels, as well as allowing you to place all five speakers near the TV and enjoy what Onkyo calls ‘the most realistic virtual surround possible’.

The unit also features a Music Optimiser for playback of compressed media files on portable media players, which restores most of the high-frequency information lost in the compression process. A range of Listening Modes (Pure Audio, Movie, Music and Game) and DSP modes adapt the sound settings to suit the relevant sources, plus you can assign different listening modes to each sound format and store them in the unit’s memory.


Among the other features is bi-amping capability and powered zone 2 playback, enabling you to play a different source on a pair of speakers in another room connected to the dedicated springclip terminals, as well as zone 2 line outs that can be connected to a separate receiver in the second room. If you have various HDMI CEC capable sources from different brands connected to the receiver, then its RIHD feature allows you to control them all with one remote. 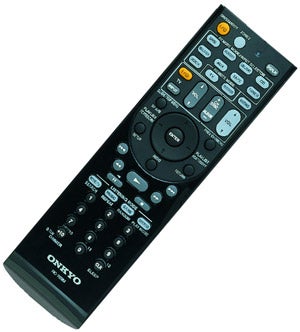 Setting up and optimising the receiver is a piece of cake thanks to the inclusion of the Audyssey 2EQ auto calibration system, which determines the number of speakers, their size, distance from the listening position and the optimum crossover frequencies to the subwoofer. In the box is a microphone for this purpose that connects to the front panel and picks up test sounds from the receiver during the stress-free 10-minute process, taking readings from three different listening positions to ensure the best-possible sound for multiple listeners. We were immediately happy with the settings it chose, so there was no need to make additional alterations afterwards.


But if necessary, you can alter the speaker settings manually using the surprisingly intuitive menu system on the front display panel, while the smart remote – which is much smaller than your average receiver handset – packs a high amount of buttons into a small space without making it seem cluttered.

In action the TX-SR576 quite literally delivers a lot of bang for your buck with movies. We connected a modest speaker system comprising Mirage Omnisats and a Velodyne MicroVee sub and fed it with a 5.1-channel PCM signal from a Toshiba HD DVD deck playing ”Harry Potter and the Goblet of Fire”. Flipping straight to the scene in which Harry battles the dragon, the SR576 immediately sucks you in, with its clean and transparent sound quality that heightens the epic feel of this stunning sequence. It’s snappy and dynamic, and there’s real force and depth behind effects like the dragon beating its wings or shooting out fire. Furthermore, the tinkle of breaking glass and tiles as the beast jumps from roof to roof reveals impressive top-end detail.

Bass is in plentiful supply too, and when the volume is pumped up high it copes admirably, maintaining a cohesive soundstage that gets nice and aggressive without sounding too brash or bright, which suggests that Cinema Filter is doing a good job. The Hogwarts kids’ hammy dialogue sounds direct and realistic as well, and surround effects are delivered with a great deal of finesse. The Onkyo also does a fine job with DVD soundtracks, delivering a crisp and well-controlled rendition of the ”Star Wars Episode I” pod race sequence. Overall this is a very impressive movie performance for the money.


The TX-SR576 works wonders with Dolby Digital Plus material too. We played the ‘Safari’ clip from a Dolby demo Blu-ray disc on a Samsung BD-P1400 and were blown away by the crispness and energy of the sound, particularly from the sparkling rear channels.


Also impressive is how the Onkyo made our speakers sing with music playback, turning in a rich and soulful performance with ”Frank McComb Live In Atlanta” on CD, while Roxy Music’s ”Avalon” on SACD (fed in via the analogue inputs) sounds as silky and atmospheric as you’d expect.


The TX-SR576 is a very impressive AV receiver with a vast array of innovative features and admirable performance that belies its budget price tag. Particularly impressive is its Dolby Digital Plus decoding, which is a real boon for Blu-ray owners on a budget.