Onkyo is on a high after scooping another gong for the TX-SR608 in our 2010 Awards, but if that feature-packed receiver is beyond your budget then its baby brother might be more up your street. Naturally for an entry-level model, many of Onkyo’s juiciest features have been stripped away to reach an attractive price point, but if its performance is half as good as the SR608 we could still be onto a winner.


It’s a 5.1-channel receiver offering 100W per channel, and most significantly it can handle 3D signals through its HDMI v1.4 sockets, which is great news at this price.

First under the spotlight is the SR308’s design, and we’re pleased to say it’s a pleasant looking unit with a smart black finish (also available in silver if you prefer). That said, if clutter’s not your thing you might not be enamoured by the busy front panel, which is teeming with big dials and buttons, although these make it possible to control every aspect of the Onkyo’s functionality if you don’t have the remote to hand.


The buttons on the front panel let you flick through the various listening modes and sources, plus there are keys for controlling menus. The central display panel is bright and provides a comprehensive range of information about the incoming signal and current settings. We’re slightly disappointed by the lack of front sockets, which makes to hard to temporarily connect external sources, but at least there’s a headphone jack and an input for MP3 players. A ‘Music Optimiser’ button for boosting the sound quality of compressed files is found on the left.


The rear panel looks sparse compared with the SR608, although it should suffice for those with simple systems. There are three 3D-ready HDMI inputs and one output, which is the bare minimum for any AV receiver, enough to cover a Blu-ray deck, games console and Sky box. It doesn’t leave room for any expansion though, so if you’re likely to add more HDMI-equipped kit in the future it’s worth stepping up to the SR608.

There are three digital audio inputs too – two optical and one coaxial – and five sets of analogue stereo inputs. On the analogue video side you get two component inputs and one output, plus four composite inputs and two outputs. Other sockets include a subwoofer pre out, radio antenna inputs, a universal port for Onkyo’s optional peripherals (including iPod docks and DAB radio tuners) and an RI remote system control port.


Interestingly, only the front channels are given binding posts – the rest of the speakers have to be connected to springclip terminals, a sign of the SR308’s budget nature. The small holes don’t make it easy for you to connect thick speaker cables and the connection isn’t as sturdy as binding posts.


Onto features and surprisingly Onkyo has left out automatic calibration, arguably more useful on an entry-level product like this. Still, making sonic tweaks is quite an easy process as we’ll discover later. The TX-SR308 can decode all of Blu-ray’s HD audio formats, which is easy to take for granted but it’s worth remembering that not all receivers in this price class offer this feature (Yamaha’s RX-V367 won’t do it, for example). It also handles multichannel PCM, DSD and DTS 96/24 signals.

Naturally, there’s a wide range of listening modes on board, providing plenty of options for movie and music playback. Among these are eleven of Onkyo’s own DSP modes – including settings for four different types of video games and the useful All Channels Stereo mode. If you want to avoid all of these settings, simply select Direct, and if you want virtual surround, go for Onkyo’s Theater Dimensional mode or Dolby Pro Logic II. Unsurprisingly there’s none of the fancy Pro Logic IIz or Audyssey processing found on the SR608.


One thing Onkyo receivers always deliver is exceptional ease of use, and the SR308 continues this tradition despite its bargain basement price. When the HDMI output is connected to your TV, you get an onscreen menu that’s much easier to use than the front panel display. It’s also more attractive than you might expect and clearly laid out, plus it contains loads of audio tweaks and speaker configuration settings. This may be an entry-level product but such detailed control is befitting of a more expensive machine. 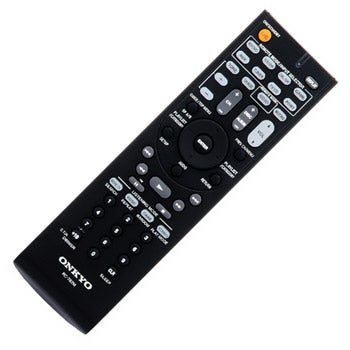 
With Blu-ray soundtracks, the TX-SR308 delivers a snappy, energetic sound and musters a satisfying amount of muscle to boot. You can hear evidence of its budget origins in the slightly brash, bright sound that creeps into frenetic action scenes – the SR608 is a much smoother and mature sounding machine – but for a receiver costing less than £200 we really can’t have much cause for complaint.

Once again we turned to ”Hellboy II” to test the Onkyo’s mettle and the movie’s incredible action scenes zip and fizz from the speakers. It masterfully orchestrates the chaos during Hellboy’s battle with the Elemental – rear channel effects are smoothly steered, smashing glass and crashing cars sound crisp and realistic, while stomping footsteps and explosions are tight and punchy.


But when the Elemental screeches and clatters the passing helicopter, the loud, high-pitched effects are slightly jarring on the ears. Likewise the climactic battle between Hellboy and the Golden Army, in which clashing metal effects sound harsh. Not a disaster, just a reminder that you have to make some compromises at this price.


The Onkyo also proves to be surprisingly musical for a budget machine, handling vocals with an enjoyable tone and digging out lots of detail. There’s a smooth balance across the frequency range too, and it has no problem keeping pace with fast, frenetic dance music.


If you’re looking for a decent home cinema hub on a tight budget, the TX-SR308 certainly deserves a place on your shortlist. The inclusion of 3D-ready HDMI sockets, HD audio decoding and an onscreen menu system make a mockery of the peanuts price tag, as does its enjoyable performance with movies and music. A few sonic shortcomings, the lack of auto calibration and cost-cutting springclip terminals rain on the parade, but on the whole the TX-SR308 is an impressive budget option.