The TX-NR818 benefits from a slick and attractive onscreen menu system. Its straightforward layout makes it easy to explore the unit’s myriad functions, and is particularly helpful when navigating networked media servers. Signing into Spotify is a slow, finger numbing process with the remote but that’s the only real operational negative to report.

There are various ways of switching between input sources, and InstaPrevue makes life easier by showing you a live thumbnail of the picture on each HDMI input.

Hit the Home button and a small menu provides access to a few key functions, including the setup menu, which covers every conceivable aspect of its performance – speaker calibration, sound modes, inputs, HDMI features, video… it’s incredibly thorough. A sensible submenu structure and good use of graphics stops it feeling too dense and complex.

If you don’t have the patience to optimise it yourself that then you can use the NR818’s automatic calibration mode, Audyssey MultEQ XT32. This is Audyssey’s most advanced room correction tech, equalising the sound according to the acoustics of your room based on readings from up to eight positions. As ever, it’s always worth checking the settings afterwards and tweak anything that looks suspect, but in our test the results were spot-on.

The supplied remote is easy to master, thanks to its spacious, intuitive button layout. It’s quite cluttered towards the top and the buttons are fairly small, but good labelling keeps confusion at bay.

There’s also an app for iOS and Android devices that lets you control the NR818 on a smartphone or tablet. It looks pleasant and operates smoothly, although we prefer using the physical remote.

With Prometheus on Blu-ray it’s an absolute blast from the word go. Like the NR5010 and other Onkyo amps before it, the NR818 delivers wall-shaking power and bags of energy, but with an overriding sense of finesse and control.

Prometheus’ action scenes bring out the best in the Onkyo, particularly the epic climax, which is chock full of massive rumbling explosions as spaceships collide and the landscape crumbles. The NR818 orchestrates the scene with an amazing sense of scale and fast, precise steering of surround effects. It’s breathtaking stuff.

Dynamic effects fire from every speaker with purpose, dialogue emerges clearly from the centre channel amid the chaos and there’s a sense of unity and cohesion across the soundstage that you can completely lose yourself in. The string-laden score is smooth as silk, lending an suitably emotive undercurrent to the drama. 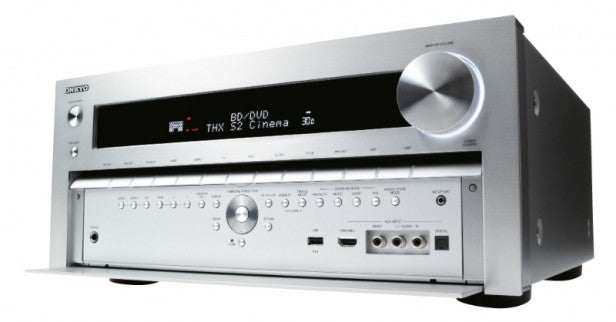 But what’s most impressive is that the NR818 musters its mighty sound without running out of steam or straining over the bigger, feistier effects – even as it reaches the upper echelons of its volume range. That’s precisely why THX has slapped a badge on this bad boy.

But it doesn’t just excel at the large-scale stuff. With quieter scenes it demonstrates a lightness of touch that you don’t expect from such a power-monger. Shots of scientists exploring the caverns are a case study in atmosphere and tension thanks to the NR818’s pin-sharp reproduction of eerie background effects and echoes, while the off-kilter score hums away ominously underneath.

And when Fifield and Milburn come a cropper, the horror is heightened by the Onkyo’s ability to tease out grisly high-frequency details like squelching and hissing – making the scene seem even more gruesome than usual.

In fact, no matter what you throw at this remarkable receiver it comes up with an entertaining, invigorating sound. That goes for music too – CDs and MP3s sound crisp and well-balanced, but with hi-res FLAC files it really sparkles, garnishing the music with twinkling detail.

Another day, another top-drawer AV receiver from Onkyo. As we’ve come to expect, the TX-NR818 is absolutely stuffed with features, including futureproofed 4K upscaling, DLNA and internet music streaming, but it’s backed up by potent, polished (and THX-certified) performance that will leave any self respecting home cinephile grinning like a Cheshire cat. There’s no AirPlay, but you’ll probably be too busy revelling in its top-drawer movie performance to care.