Onkyo is starting to have a bit of a monopoly on our Home Cinema Awards, scooping Best Surround Sound product two years on the trot with the TX-NR906 and TX-SR608 AV receivers. But its success is not hard to understand, given the Japanese company’s uncanny ability to pack its products full of all the latest features and deliver superb sound quality while keeping its prices competitive. Signs are that the 7.2-channel, THX Select2 Plus TX-NR609 shares the same ethos, and as ever Onkyo has thrown in one or two groundbreaking features that set the trend for others to follow.

The TX-NR609 is the revamped version of the TX-SR608 and the switch from the letter S to N indicates this midrange model is now network-enabled, making it possible to stream content from PCs and access internet radio. But the main talking point is the NR609’s Spotify support, which puts an enormous library of songs at your disposal without the need to plug in an iPod or MP3 player.

But the big changes aren’t confined to the feature list. Onkyo has also given the external design a makeover, opting for a much more understated black or silver fascia with fewer jutting angles than its predecessor. It’s a great look, appearing minimal without leaving any of the key connections or controls on the workshop floor. All of the buttons are discreetly lined up along the nooks and crannies on the fascia, which means you don’t actually notice them until you get up close and personal – apart from the whacking great volume dial that is, which is accentuated by a white light.

The display panel is large and therefore easy to read, showing you all the crucial information, while along the bottom you’ll find one of the unit’s many HDMI inputs, a headphone jack, a composite video input, a USB port (for direct digital connection of an iPod/iPhone or USB storage device) and an input for the supplied setup microphone. These aren’t covered though, making them vulnerable to toddler attacks.

The back panel offers a wealth of other connections that should keep you covered for years to come. Our eyes are naturally drawn to the row of five HDMI inputs (that’s six in total) and one output, all of which are version 1.4 and can therefore receive and pass on 3D pictures, HD audio, sound from an ARC-compatible TV and anything else you care to throw at them.

You also get two component video inputs (one output), five composite video inputs (two outputs), four digital audio inputs (two optical, two coaxial), six analogue audio inputs (one output) plus powered and line-level Zone 2 outputs. Among the more unusual sockets is Onkyo’s Universal port for adding peripherals like the UP-A1 iPod/iPhone dock or the UP-DT1 DAB radio tuner and an analogue RGB input for PCs. All of the network features can be accessed via the Ethernet port, although Onkyo has launched a wireless USB adapter, which makes life a whole lot easier. The speaker terminals are colour-coded, banana plug compatible binding posts, not a springclip to be seen.

Spotify will be most people’s feature highlight given the growing popularity of this music streaming service, which puts something like 10 million songs at your disposal. It’s available with one press of a button and the interface is neatly integrated into the onscreen menu system. Music is organised into categories like What’s New and Starred, plus you can access playlists and view cover art. Integrating this feature into an AV receiver is an idea so brilliant that it’s a surprise that no-one’s done it before.

It’s joined in the network menu by a bunch of internet radio services including vTuner, Napster and Last.fm, plus the DLNA and Windows 7-certified NR609 allows you to stream your MP3, WMA, FLAC, WAV, Ogg Vorbis, AAC and LPCM files.

The other big news is that this is the world’s first AV receiver to offer video upscaling to 3840 x 2160 (4K) resolution, courtesy of the built-in Marvell Qdeo chipset. Of course, that’s of no use to your current hi-def telly but with 4K sets on their way – including Toshiba’s glasses free TV, which they reckon will be out ‘in the next 12 months’ – it could have some practical use in the not-too-distant future, although we’d be curious to see how good a DVD picture upscaled to that sort of resolution can actually look. For now, it’ll also upscale SD video to the usual 720p, 1080i and 1080p resolutions. 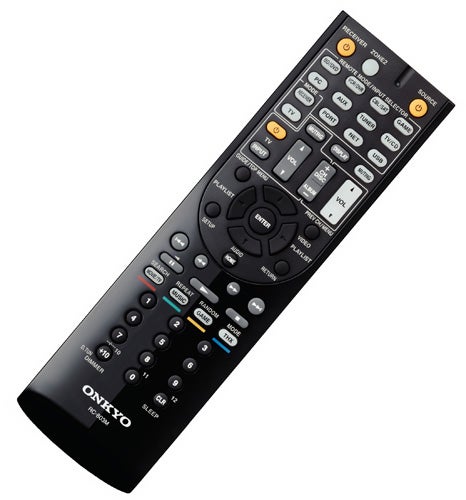 Elsewhere the NR609’s THX Select2 Plus badge means it’s optimised for medium-sized rooms (up to 2,000 cubic feet) with a viewing distance of 10-12 feet or more from the screen. The amplifier musters a meaty 7 x 160W of power and the presence of two subwoofer pre-outs means bass junkies can hook up two subs for extra low-end firepower. There’s also a superb array of sound modes on board, spearheaded by a choice of two ‘vertical’ surround technologies, Audyssey DSX and Dolby Pro Logic IIz. The former offers a choice of extra front height or front width channels, whereas the latter only provides front height. We’re not sure you need two modes that do essentially the same job, but the presence of both is another illustration of how far Onkyo pushes the boat out when it comes to features.

Alongside this fancy processing tech is a wide range of Onkyo’s own modes courtesy of the advanced 32-bit DSP chip, including four specifically designed for gaming, plus the Theater-Dimensional mode offers virtual surround and an Advanced Music Optimizer spruces up compressed audio.

When it comes to setup, the TX-NR609 is surprisingly straightforward, a far cry from the complex, impenetrable machines of yesteryear. Key to its success is the excellent onscreen menu, which uses a similar layout and colour scheme as the SR608 but with updated fonts that lend a little extra clarity to menus. It’s responsive too, and we had absolutely no trouble hooking up to a network and using the various web radio features.

Getting the sound just right is also a cinch thanks to the automated Audyssey 2EQ setup mode. It uses the supplied mic and test tones to ensure the correct settings for your speakers, plus it makes adjustments to counter any problems with acoustics. And when activated, Audyssey’s Dynamic EQ and Dynamic Volume constantly tweak the sound to maintain the correct volume and dynamic range.

The remote is the same as the TX-SR608’s, which isn’t a bad thing. A few keys are a little small for comfort but the essential controls are easy to locate and everything is clearly labelled. It’s also styled in a fetching gloss-black finish, which always looks good on the coffee table.

With so many features to cram into the TX-NR609, it’s amazing that Onkyo’s engineers had any time to get it sounding as good as it does. Its performance with our Blu-ray test discs is awesome, achieving levels of power, precision and clarity that you might not expect from a midrange receiver.

We started with Avatar, and the relish with which the Onkyo gets stuck into its big battle sequences is infectious and downright exhilarating. The deep muscular sound of the army’s missiles blasting chunks out of the Pandoran forest will leave you (and your neighbours) breathless, backed up by crisp high frequencies, clear, direct speech reproduction and a sense of scale and surround imaging that brings you closer than ever to the real cinema experience.

Iron Man 2’s Monaco Grand Prix scene is equally impressive, showcasing not only the Onkyo’s muscularity but also its consummate control, which stops the scene’s brutal effects from straining or sounding harsh at high volumes. So as a result, the roaring, raspy engines of the F1 cars sound ferocious, sliced-up cars hit the ground with a convincingly solid metallic crash and effects are masterfully steered around the expansive soundstage. Onkyo’s sound is smoother and easier on the ear than previous generations, and that’s in evidence once again, but not at the expense of dynamism or attack.

It also shows great subtlety when conveying calmer scenes with lots of delicate detail or gentle ambience in the background. It easily teases out these sounds, giving the impression of depth and texture that makes it wonderfully immersive.

With music, a little more finesse wouldn’t go amiss just to tease out those some of those finer musical details with demanding material, but unless you’re a staunch audiophile you’re unlikely to be disappointed by the Onkyo’s handling of SACD and CDs. There’s a lovely sense of balance across the frequency range, while the inherent smoothness and warmth shines through, even when using it without a subwoofer.

We didn’t think it was possible for Onkyo to improve on the superb TX-SR608 but incredibly it has. Everything we loved about last year’s model can be found on the TX-NR609 but mixed in with a bunch of new features that feel like so much more than mere gimmickry – network functionality is enormously useful, and there’s real longevity and value in having Spotify on board.

And don’t forget that it’s THX Select2 Plus certified, supports iPods, plays a wide range of audio formats from USB devices and offers loads of connections and processing modes – not to mention automatic setup, terrific onscreen menus and 3840 x 2160 upscaling, which may not be useful now but might be when 4K TVs inevitably become the norm. With this sort of spec sheet you’d expect it to cost a lot more, so at around £500 the TX-NR609 feels like a real bargain.