Manufacturers have only recently cottoned on to the idea that an AV receiver is every bit as deserving of a nice-looking menu system as a Blu-ray deck or TV – perhaps even more so, given how complicated they can be. Onkyo is one of the main supporters of that idea, and as such the TX-NR5010’s onscreen GUI is terrific.

Hit the home button on the remote and a semi-transparent box appears in the middle of the screen, housing a row of coloured icons for Network Service, USB, InstaPrevue, Setup and Firmware Update. Delve into the setup menu and this attractive design continues with a vertical column of cute icons illustrating each of the nine sections, which like all of the menus is set against a black background.

The amount of detail it goes into is staggering, allowing you to manually calibrate the sound using the equalizer, distance, level and bass management settings, as well as allowing you to adjust the characteristics of the various listening modes (including a dedicated THX section) or assign inputs and outputs. The TX-NR5010 is also certified by the Imaging Science Foundation (ISF) and you’ll find advanced picture tweaks in the Video Adjust menu. There’s too much here to discuss in full, but rest assured it leaves no stone unturned.

If that all seems too complicated, the TX-NR5010 also comes equipped with Audyssey MultEQ XT32, which sets all the levels and distances for you, as well as carrying out room acoustic correction. The supplied microphone is connected to the front panel input and the unit takes readings from up to eight positions around the room, then automatically calibrates the sound. The sort of user at which this amp is aimed might not fancy leaving sound quality in the hands of an automated system, and if that’s the case stick to the manual settings – but everyone else can let Audyssey do the heavy lifting.

The Network Service menu is equally attractive and easy to follow. Here you’ll find Onkyo’s internet content and DLNA streaming, with each service denoted by its logo. Access the Home Media menu and the logical sequence of folders leads you to music stored on your networked servers, although it can take a long time to find tracks if you have a large library. When playing back music the cover art is displayed in the middle of the screen with the file name, duration, artist and album. As well as accessing music from the unit’s GUI, you can also stream music to it from Windows Media Player’s Play To feature, but there’s no AirPlay support.

Spotify’s layout might be simple but it offers a vast selection of music to stream, with a handy search tool allowing you to find what you want, as well as What’s New and Starred sections, plus options to link up with Windows Media Player and iTunes. We dug out the 40th Anniversary Edition of Marvin Gaye’s Trouble Man soundtrack and it streamed without hassle, making its blend of 70s funk and soul sound better than ever. It’s also pleasing that you can carry on listening to music as you browse the menus. This is representative of the music streaming experience in general – straightforward and hassle-free.

The TX-NR5010 uses the same zapper used by models further down the range. It’s a versatile controller, allowing you to control TVs and other Onkyo gear. At first glance it looks a little too cluttered, but after using it for a while you realise that the keys you need the most are cleverly placed. The central direction pad is surrounded by Home, Return and Setup, with Volume just above these. The keys are all rubbery and pleasant to press too and clearly labelled. Source selection could have been made easier though, as the individual buttons are mixed in with the ‘Remote Mode’ keys at the top, which is confusing at a quick glance. Owners of iOS or Android devices can also control the TX-NR5010 with Onkyo’s free Remote App.

Like previous Onkyo powerhouses, the TX-NR5010’s movie performance is powerful and aggressive, which results in a breathtakingly exciting listen – especially when you’re spinning a blockbuster Blu-ray like Avengers Assemble.

The TX-NR5010 doesn’t ease you in gently – its naturally upfront and forceful sound quality plunges you head-first into the action. True to its THX spec it has absolutely no trouble filling a large space and delivers action scenes on an awe-inspiring scale.
Onkyo TX-NR5010

The movie’s set-pieces, such as the Chitauri’s attack on New York, sound suitably big and boisterous, with the Onkyo gleefully lashing effects around the soundstage while making the demolition of New York buildings sound deep and weighty. As Hulk leaps between buildings smashing up aliens or planting his fist into the front of a warship, the resulting boom shakes the room. 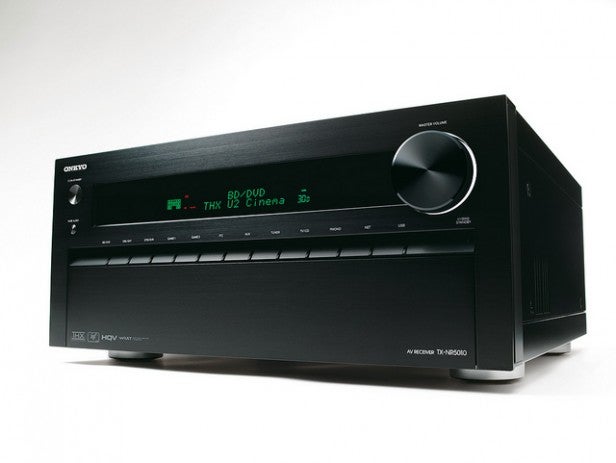 But what the Onkyo does so well is muster all this power and excitement without losing composure, keeping mid and high-frequencies sounding smooth and palatable when conveying screeching aliens or clanking metal. And the TX-NR5010 simply isn’t phased by loud volumes, refusing to strain as the dial crept up to and over the 82dB THX Reference mark.

Despite its obvious muscle, the TX-N5010 relishes a quieter, atmospheric scene too. Natasha and Banner’s conversation in chapter 4 is teeming with micro details, like the chirping of crickets from the surround channels and the little shuffling of Banner’s feet on the floor.

Sharp steering allows effects to be fired between speakers at lightning speed, while fast, rhythmic sounds like the rat-tat-tat of gunfire are on point, showing the Onkyo has agility behind the brawn. It has a wonderful command of the human voice too, which means none of the dialogue gets lost in the cacophony.

In fact, we can’t really find any holes in the Onkyo’s performance – the only thing we can say is that fans of a smoother, more measured sound might get more joy from rival brands like Denon or Marantz, but anyone craving a visceral movie experience will be thoroughly satisfied.

Perhaps the most surprising thing about the TX-NR5010 is how agile it is with music for such a big beast. Its nimble handling of complicated jazz pieces, funk basslines and fast dance rhythms is impressive, as is the clarity of its vocal reproduction and crispness of its high-frequencies – all of which makes the TX-NR5010 a superb all-round entertainer.

The TX-NR5010 is a magnificent AV receiver, worthy of its flagship mantle. Not only is it packed with almost every AV feature under the sun, including impressive music streaming features, sophisticated video tech and shedloads of connections, but it’s also built like a tank and delivers some of the most thrilling movie sound you could ever hope to hear – and it’s not bad with music either. Yes it’s pricey, but if you have this sort of money it’s hard to imagine how it could be better spent.