Onkyo got its 2011 range of AV receivers off to a great start with the TX-NR609, which wowed us here at TrustedReviews towers with its lengthy feature list (including Spotify for the first time on an AV receiver), extraordinary sound quality and, most crucially, a very reasonable price given the sheer amount of goodies on board.

So it’s with a great deal of anticipation that we turn our attention to one of Onkyo’s step-up models, the TX-NR1009. It’s not quite the best AV receiver Onkyo has to offer (that honour goes to the TX-NR5009) but it’s just two steps down, meaning much of the spec will be similar. Its premium price tag gives Onkyo a chance to cut loose and show us what it’s really made of in terms of performance as well as throwing in its usual cavalcade of features.


It’s a 9.2-channel receiver with a colossal 180W per channel, a power rating that clearly satisfied the boffins at THX who have granted it THX Select2 Plus certification. That means it’s suitable for rooms up to 56 cubic metres, and you get a range of THX presets.

And if you’re wondering where all those extra channels are coming from, the TX-NR1009 adds a pair of surround back channels and a pair of front height and/or front width channels for use with the on-board ‘vertical’ sound modes, as well as a second subwoofer output for those moments when one bass box simply isn’t enough.

The design isn’t up to Marantz levels of gorgeousness but is elegant enough, looking like a piece of kit worthy of its price tag. It sports a fetching brushed black fascia with a relatively minimal layout and few controls or knobs to twiddle. The large, info-packed display panel is bookended by Standby and Pure Audio buttons at one end and a large illuminated volume dial at the other. There are input selection buttons on display too, but most of these are discreetly arranged in a row and don’t draw any attention.

However, flip open the flap at the bottom and you’ll uncover a treasure trove of buttons and sockets. These include menu controls, listening mode and zone selection keys, plus HDMI, USB, composite, optical digital audio and analogue stereo inputs.

Build quality is fantastic, inside and out. The bodywork is seriously sturdy and rigid, keeping vibration to a minimum, while on the inside the separate power and pre-amp blocks help keep interference at bay.

If you like lots of AV connections, the back panel will blow your mind. There’s a further seven HDMI ports on the back alongside two outputs, every single one of which is v1.4 and ready to channel high-bandwidth 3D images to a TV or anywhere else you care to send them.

There are more composite video, S-video, analogue stereo inputs than you’ll probably ever need, as well as two sets of component video inputs (and one output) and five digital audio inputs (three coaxial and two optical). These are joined by a set of 7.1-channel analogue inputs and 9.2-channel pre-outs. The unit supports bi-amping, and two pairs of outputs are provided to send audio to a second and third zone. Custom installers can make good use of the IR, 12V trigger, RS-232 and R1 remote control ports.

It doesn’t stop there either. You’ll find another USB port for playing back digital media, Onkyo’s proprietary Universal Port to connect optional peripherals like an iPod dock and DAB radio tuner, a D-sub 15-pin PC input and an Ethernet port. 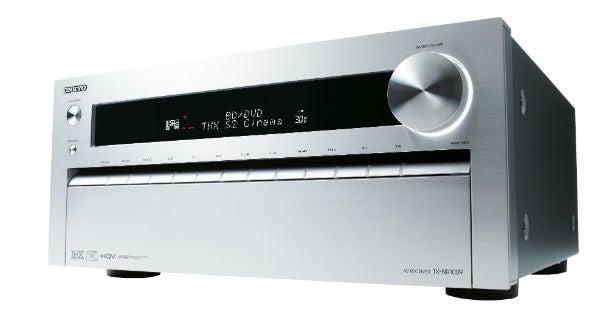 The number of other tricks inside this receiver is simply extraordinary. First up, let’s talk networking. It’s DLNA certified, which means you can stream music from devices on your home network or from Napster and Spotify, while internet radio is provided by vTuner and Last.fm. Thanks to a recent firmware update the TX-NR1009 now also boasts the AUPEO! customised radio service and it also added a search function to Spotify that makes it easy to find a particular track.

When streaming your own files, the list of supported audio formats includes MP3, WMA, WMA Lossless, FLAC, WAV, Ogg Vorbis, AAC and LPCM – pretty much a full house. The Onkyo also supports Windows 7’s Play To feature and will play these formats from USB storage devices or iPod/iPhone, offering two more convenient ways of playing back your tunes.

Although nothing new on an AV receiver, this sort of streaming tech has found its natural home here, allowing you to access a wealth of music without having to fire up a separate player or load tracks onto a portable device. It’s worth noting that you don’t have to hook up the Ethernet connection to use these features, as Onkyo now sells a wireless LAN adapter (UWF-1) that can be plugged into the front USB port.

Like all of Onkyo’s receivers, the TX-NR1009 comes loaded with an avalanche of sound modes made possible by the advanced 32-bit processing chip. These include four presets for gaming, Onkyo’s Theater Dimensional Virtual Surround mode and an Advanced Music Optimiser for sharpening up compressed music formats. Of course, the unit also decodes all of Blu-ray’s hi-res audio formats, accepting them as raw bitstreams or as decoded multichannel PCM.

On the video side the Onkyo can convert any video signal all the way to 4K thanks to the on-board Marvell QDEO video scaler. That may not be much use now with no 4K2K screens on the market, but we admire Onkyo’s forward-thinking.

But if you’re still not happy with the picture you can have it professionally tweaked by an Imaging Science Foundation engineer thanks to the built-in calibration tools.

The hardest part of the installation process is getting the TX-NR1009 into position given its 18.5kg bulk and 198.5mm height. But once it’s there and all the relevant cables are plugged into the back, it’s easier to use than you might think, despite the mind-boggling array of features on board.

The first thing you need to do is optimise the sound for your room. Luckily you don’t need a degree in acoustics as the unit comes loaded with Audyssey’s clever MultEQ XT auto calibration technology. You know the routine – plug in the supplied microphone and let the system run through a series of test tones, after which it calculates the most appropriate settings. The full calibration (taking measurements from eight positions) takes 20 minutes while a two-minute Quick Start procedure is also offered, which just focuses on the basics. Either way, it’s a painless procedure.

Also making the TX-NR1009 easy to use is the excellent onscreen menu design. This uses the same layout as previous Onkyo machines, with colourful graphics dotted about here and there, plus a simple but effective list that splits up the tweakable options in sensible groups. So the potentially nightmarish job of assigning inputs and configuring the speakers is actually a piece of cake. That said, you really have to know what you’re doing when manually managing the audio settings, as they’re very detailed.

There’s a separate menu accessed by hitting the ‘Home’ button that gives you quick access to key settings, such as sub/centre levels and picture modes.

It’s not instantly clear how you access the networking menu – the relevant ‘Net’ button is buried in amongst the other input selection keys. Hit it and you get a basic black screen showing the logos of the various services on offer. Some are easier to use than others – Spotify (which requires a premium subscription) asks you to enter your user name and password which takes ages using the remote and virtual keyboard, but on the whole all of the portals are smoothly integrated and work without any problems.

We tried out the DLNA streaming over an Ethernet connection, and it’s generally a trouble-free process, although the connection to the server dropped out once or twice. Most impressively it displayed the ‘All Music’ list with some 17,000 songs without having to wait ages for the list to populate. It would be nice to see a search facility like the one introduced for Spotify, which would prevent you having to wade through long lists to find a certain track. The layout is terrific though – we particularly like the screen while a track is playing, which includes album art.

Onkyo has stuck with the same remote as last year, using a fetching gloss-black finish and a sensible button layout. Much of the time you can operate by instinct, especially when browsing menus and playing back content, and although the top of the zapper is fairly cluttered, the decent labelling makes it easy to find what you want. There’s a row of buttons along the top labelled ‘Activities’ that let you create macros to activate several Onkyo components at the touch of a single button.

The TX-NR1009’s incredible feature list and slick operation would count for nothing if its performance wasn’t up to scratch, but thankfully it has nothing to worry about in that department.

It follows the sonic blueprint of the TX-NR609, but ups the stakes in terms of flat-out power, detail digging and overall dynamism. As a result its rendition of Avatar’s DTS HD Master Audio track is exhilarating. The brutal sounds of battle ringing out around the Pandoran rainforests are delivered with real drive and urgency, placing them right at the front of the mix, exactly where they should be. 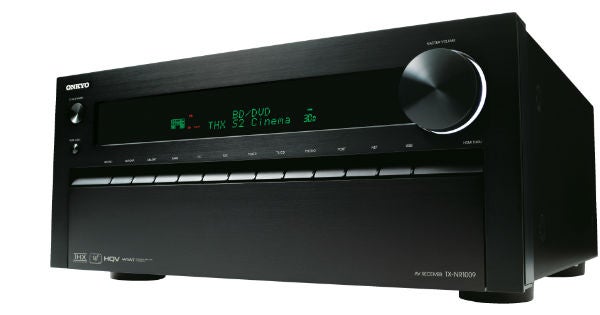 The Onkyo revels in the chaos of a decent action scene, firing sounds to the speakers with all the frantic energy of an orchestra conductor on acid, but without losing its handle on clarity, steering speed and channel separation. It’s a joy to hear.

What you also get is a wide, spacious soundstage, with all the elements easy to locate within it. Throughout the movie, it articulates dialogue through the centre channel with admirable clarity and detail – even when it’s competing with stuff being blown up – and there’s admirable coherence across all channels.

The TX-NR1009 doesn’t shy from its bass handling responsibilities either, bashing out those low notes with all the dynamic thump of a Haye right hook.

Yet for all the power it’s packing, the NR1009 doesn’t clobber you over the head with a sonic sledgehammer like some past Onkyo models. It displays a lightness of touch when required, painting in delicate details behind the more forthright sounds and giving every element room to breathe. Nowhere is this more apparent than during Avatar’s quiet moments, rendering the subtle noises of the rainforest with pin-sharp clarity.

That also pays dividends when playing music, as it helps gentler material retain a sense of elegance when required, but when fed high-octane rock or dance music it can mix it with the best of them. The sound is energetic yet controlled and nicely balanced.

Finally, DTS Neo:X is unquestionably impressive, offering a heightened sense of immersion, yet it’s no more impressive than Audyssey DSX or Dolby Pro Logic IIz, making us wonder if three modes doing essentially the same job is a touch excessive.

Verdict
Our love affair with Onkyo’s AV receivers continues with this wonderful home entertainment hub. The amount of features on board is actually quite overwhelming – DLNA and Spotify music streaming are highlights and the world’s first appearance of DTS Neo:X is pleasing despite its similarities to Dolby and Audyssey’s equivalents.

There are sockets in abundance, the internal circuitry and overall build its exemplary and importantly, it’s easy to use, despite its inherent complexity. There were one or two niggles with DLNA but otherwise plain sailing.

When it comes to its core duty of playing Blu-ray soundtracks though, the TX-NR1009 excels – the sound is powerful and assertive but not at the expense of finesse, all of which makes this an AV receiver you should be sticking on your shortlist, provided you can stretch to that hefty asking price.