You’d never know from how ‘little’ we harp on about it, but iPods aren’t exactly the best sounding media players on the market. As a result, if you care about quality reproduction of your audio you’ll probably be inclined to sacrifice their admittedly impeccable user interfaces in favour of a player better suited to do justice to your music collection. 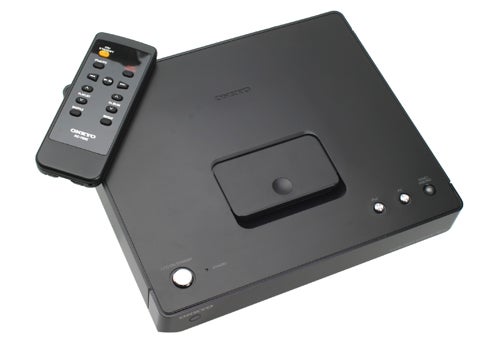 While Apple might not make much effort to improve the iPod’s audio processing itself, the company does seem happy for third parties to do something about it by way of the iPod dock connector.


For instance, the dock on the Onkyo ND-S1 Digital Media Transport can tap directly into the digital files stored on an iPod thereby bypassing the player’s DAC and amplifier so they can be decoded elsewhere. As such you could plug in an iPod classic, fifth gen iPod, any gen of iPod nano, iPod touch or even an iPhone (in flight mode) into the ND-S1 and the quality of the audio available will be dictated not by the version of iPod you’re using, but by the quality of the digital files stored therein, and the system to which you are sending them.

The ND-S1 isn’t just a one trick pony, though. A quick peak at its rear shows not only a power input and both coaxial and optical digital outputs, but also a coaxial video-out and, more interestingly, a USB-B port. You might expect that this makes it possible to connect any docked iPod to a PC and sync with iTunes and indeed it does. There’s even a button to toggle this mode on or off should you desire.

What’s also clever about the ND-S1 is that it serves as a digital output for the PC to which it is connected. Hence the ‘PC’ and ‘iPod’ buttons at the front of the system’s top surface. The system can even be powered solely by this USB connection, albeit sacrificing the charging of a connected iPod. If I were Onkyo’s engineers I’d be adding a second USB port, for additional power, to the next model. 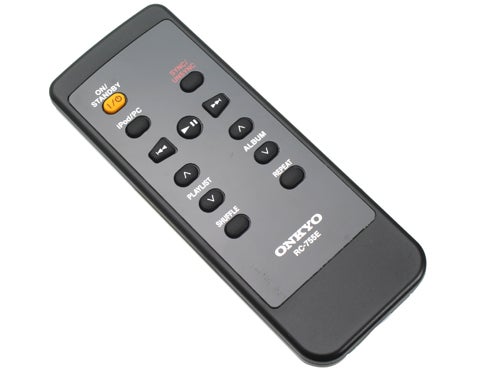 There’s an ‘RI’ remote control jack, too, so by hooking up the ND-S1 to an RI-equipped Onkyo amp or A/V Receiver (using the supplied cable) both can be controlled with one remote, but only if the amp/receiver has a ‘dock’ input setting. On the subject of remote control, the ND-S1’s ‘clicker’ isn’t the best we’ve used. Navigation options are limited to changing the current playlist or album, and why it isn’t possible to browse the full iPod menu structure I don’t know, especially when other docks offer this functionality.


The ND-S1’s design might not impress everyone. For a start, does the ND-S1 need to be quite as large as it is? I’m pretty sure its 205 x 175 x 35mm dimensions enclose a lot of empty space since all it’s doing is passing a signal from an iPod to a digital output, so there can’t be much inside it. The plastic, sliding dock cover would probably be fine on a £50 dock but on one costing close to £150 it feels decidedly cheap. 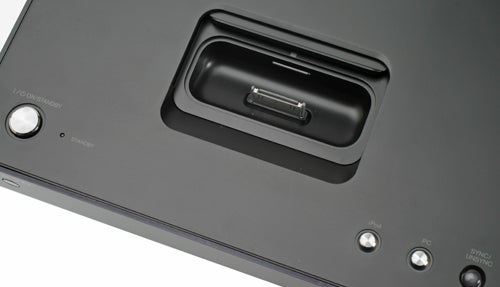 That said, the aluminium casing feels solid whereas the whole design is intended to match Onkyo’s A/V receivers and the A-5VL stereo amplifier, especially. You can also choose a silver or black finish so fitting the dock into an existing set-up shouldn’t be a problem.


What should sell the ND-S1 to anyone with an extant audio system to warrant its inclusion, or the spare cash to buy one, is the audio quality. Put Apple Lossless tracks on your iPod and you can have CD quality audio without the hassle of needing to swap discs constantly. So-called purists may claim that their CDs still sound better than a digital audio track, but since the nature of lossless compression makes that impossible I’m inclined to think they’re talking nonsense.

Certainly, using the same speaker system and comparing the same tracks played first from my iPod touch using the headphone output and then via the ND-S1’s optical output, the difference was tangible. Tracks are reproduced with more texture and detail making the listening experience that much more immersive.


Take AFI’s Too Shy to Scream. A great track however listened to, but using the ND-S1 the vocals sound more accurate and instruments more defined; there’s a precision and a distinction to the cymbal hits that’s lost when using the iPod’s internal processing. Similarly, additional vocal clarity was eked out of Frou Frou’s Let Go much to my enjoyment. 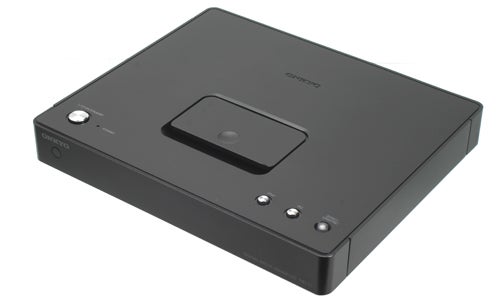 Turn the volume up a bit and there’s notably less compression using the ND-S1, too, no doubt thanks to only having an external DAC working its magic on the signal. The residents of our neighbouring office weren’t quite so impressed, alas, but I often have a hard time convincing others that there’s nothing wrong with listening to Fall Out Boy and Avril Lavigne.


I’d usually mention alternatives but the ND-S1 is pretty much peerless. However, if you don’t already own a decent AV/hi-fi system, Bowers & Wilkins’ Zeppelin might be a better and possibly cheaper option as it’s still the best sounding speaker dock money can buy. However, it can’t dish out sound quality to match a dedicated AV/H-Fi set-up using the ND-S1. Similarly the iTube ValveDock Carbon Edition Mk2 does an incredible job of making an iPod sound great, but it’s still using the player’s DAC so there’s only so much it can do.

The £150-odd asking price doesn’t make the ND-S1 cheap but to serious users the improved audio quality together with the built-in USB audio interface will be worth it – especially if you’re investing in an iPod-centric system from scratch or introducing an iPod to your existing hi-fi system.


The Onkyo ND-S1 Digital Media Transport isn’t cheap, but if you’re serious about getting quality audio using an iPod, it’s the best option you have.