Everyone likes the idea of home cinema but for some people incorporating rear speakers (and the cables that come with them) into their living environment is a step too far. That’s why we’ve seen an influx of 2.1-channel systems hitting the shelves, catering for those who want to take movie sound beyond the confines of their TV’s speakers but don’t have the room (or permission) for full 5.1.


Onkyo is the latest name to launch such a system but its LS-V501 takes a more audiophile approach to the concept, placing its emphasis on performance. As a result, the amp/DVD unit (DR-S501) boasts many of the features found on the company’s acclaimed 2007 range of AV receivers.

As for looks, one word springs to mind: class. The main unit’s understated black styling and large dials make it look like a piece of high-end hi-fi kit, with no contrived cosmetic gimmicks or bandwagon-jumping to cheapen the design. Likewise the wall-mountable bookshelf front speakers sport a pleasant black finish and stylish circular stands.


The active subwoofer is similarly styled in black but it’s a bit of a beast, which could make it difficult to conceal. It’s able to pound out an impressive 100W of bass power, and features its own volume control on the rear panel (the level can also be trimmed using the main unit’s front display). Its build quality is also impressive, which goes for the entire system.

The main unit can be purchased separately for around £200 less than the full 2.1 package, and combines a 50W-per-channel amplifier and a DVD player that also spins DVD-Audio, SACD, and CD – alongside digital media formats like MP3, WMA, DivX and JPEG. Playback of both hi-res audio formats earns it the ‘universal’ label, but with only three channels you won’t get the full benefit of multi-channel DVD-A and SACD discs.


The main unit also upscales DVDs to 720p and 1080i, but Onkyo has missed a trick by not offering 1080p. On the audio side it decodes Dolby Digital and DTS soundtracks, plus the Theater Dimensional DSP circuit, which generates a virtual 5.1-channel effect for movie playback. Also on board is an FM/AM radio tuner with 40 presets, and iPod owners can snap up one of two optional Onkyo docks and integrate their player into the LS-V501’s operating system.

Connections are plentiful. Video outputs include HDMI, component and composite, while on the audio side you’ll find two digital ports (one optical, one coaxial) and two sets of analogue inputs. You can also pass video signals through the deck via the HDMI or composite inputs. Completing the line-up is a subwoofer output, FM/AM antenna inputs and an RGB-capable SCART output.


The system is eminently easy to use. Most of the audio adjustments are made using the basic front display panel, though everything else is controlled from the slick and attractive on-screen setup menu. The remote is a masterclass in how to pack in a large amount of buttons onto a handset without making it seem cluttered or confusing, cleverly separating them into different sections. 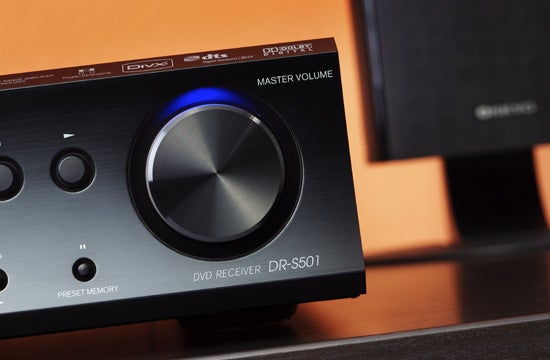 Now onto audio quality. With movies, the LS-V501 makes up for the lack of rear and centre channels with a brilliantly brutal three-channel performance. During ”Saving Private Ryan’s” Omaha Beach landing scene, the power on offer is palpable, with the subwoofer’s prodigious bass output sounding loud yet well controlled, propelling the action along at a punchy pace. Such is its power that we had to reduce the level from the ‘zero’ factory setting to stop it overpowering the other channels. 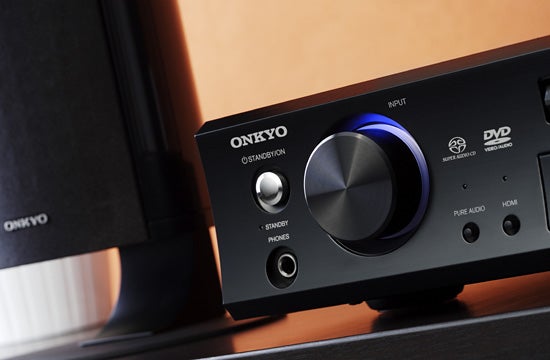 You really can hear the quality pouring out of the front speakers too – their detailed and sophisticated sound is far superior to many cheaper 2.1 systems. Midrange and top-end effects, like gunshots and bullets pinging off helmets, sound clear and direct, and, despite the lack of a centre speaker, speech (or in this case shouting) is audible over the cacophony. The fronts fuse seamlessly with the subwoofer, a testament to their own impressive bass capabilities, but if it’s not to your taste then you can alter the crossover point from 40Hz up to 200Hz.


With Theater Dimensional activated, the LS-V501 delivers an enjoyably expansive stereo soundstage, but its attempt at a 5.1-channel effect isn’t particularly convincing. Its effectiveness is governed by the angle of the speakers to the viewing position and natural reverb in the room, but even taking these factors into consideration we couldn’t make it do anything other than widen the stereo soundstage.

DVD-Audio and SACD playback lacks the surround spice that an extra three channels would have provided, but there’s no denying the quality of the hi-res stereo performance. ”Variations” by Japanese jazz group Atagiin sounds great, with the system’s detailed reproduction of tinkling piano, chunky double bass and shuffling snares putting you right in the middle of a smoky Tokyo jazz club. This excellent musical performance carries over to CD playback, as the breathtaking rendition of Donny Hathaway’s ”Someday We’ll All Be Free” demonstrates. 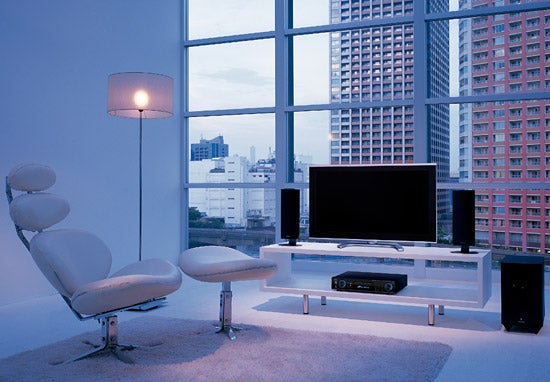 The LS-V501 is also backed up by superb picture quality. Set to 1080i, the high detail level makes pictures look not a million miles away from hi-def – the rubble and dirt of the destroyed French town during the climactic battle scenes of ”Saving Private Ryan” are reproduced with impressive clarity, while Spielberg’s drained colour palette is accurately reproduced and treated with the appropriate degree of subtlety.


The LS-V501 might be slightly more expensive than some of its rivals (you can find full 5.1 systems for less) but justifies its price tag with awesome build quality, a generous feature list and refined sound quality that benefits from Onkyo’s years of audio experience. It also looks great, proving that lifestyle oriented products don’t have to compromise on performance. The only niggle is the ineffective virtual surround, but if you want 5.1-channel sound then buy a 5.1-channel system – otherwise treat yourself to one of the best 2.1 systems on the market.