A few months ago, Onkyo announced plans to introduce a Blu-ray player at the end of 2008, but until then the company has a healthy range of upscaling DVD players to keep us amused. Among them is the DV-SP406, a player that aims to cover all of your entertainment needs at a price that won’t break the bank.

The feature likely to attract the most attention is 1080p upscaling, particularly among those with hi-def TVs and projectors who aren’t ready to make the move to Blu-ray yet. But the rest of the specification is pretty impressive too, particularly when it comes to multimedia playback – the drive supports all the expected disc types (DVD+RW/+R, DVD-RW/-R, CD, CD-R/-RW and Video CDs), but more surprising is its ability to spin DVD-RW discs recorded in the Video Recording (VR) format. The player also supports MP3, WMA, DivX and JPEG files.


Pulling the unit out of the box, our first impressions are mixed. The player is lighter than we expected and plasticky to the touch, while the front display panel is so small that a trip to Specsavers might be in order. But otherwise it’s aesthetically appealing, with clean lines, a smart black finish and very few buttons to clutter up the fascia. If black isn’t your thing then the unit is also available in silver.

We’re pleased to see a USB port on the front panel, which makes it easy to play the media formats listed above – simply plug in a mass storage device containing your files, hit the Return key and find what you want in the well-presented menu screen. Onkyo also equips the rear panel with a useful selection of sockets, including HDMI, component and composite outputs, plus a SCART socket that offers RGB output – but when the component video outputs are activated, the SCART reverts to composite video.


On the audio side, there’s a welcome choice of coaxial and optical digital audio outputs and analogue stereo output. All that’s missing are 5.1-channel analogue outputs, but as there’s no DVD-A or SACD playback, and most AV receivers can decode Dolby Digital and DTS anyway, we can see why Onkyo left them off.

Elsewhere there are few standout features, but you do get the standard array of DVD playback tricks – four search speeds, frame-by-frame advance, slow motion, repeat A-B, bookmarks and a two-stage zoom mode that enlarges the picture by 400 and 1600 per cent. Also handy is the Last Scene Memory, which remembers the point where you left off, even if you remove a disc – a feature we wish more Blu-ray players offered. But those who like to tinker with the picture before watching a movie may be disappointed to learn that there are no image adjustments on board, apart from a Black Level Expansion mode that makes very little difference. You can, however, set the deck to output 576i, 576p, 720p, 1080i or 1080p output using a single button on the remote.

Using the player is a breeze. We’ve seen the setup menu layout a hundred times before but it’s a neat, comprehensible design with a pleasingly responsive cursor, and if you hit Setup during playback it stops the movie and jumps to the menu, resuming playback as soon as you exit. There’s also an onscreen display that shows the key information as playback continues, making up for the microscopic display on the front panel. What’s more, discs load very quickly and layer changes are nigh-on instantaneous – all of which makes the business of watching movies a hassle-free experience.


If only we could say the same about the remote, which is a bit of a let-down. First off, it’s far too small for its own good, making most of the buttons too fiddly and close together – those with a clumsy thumb might find themselves hitting the wrong option far too frequently. 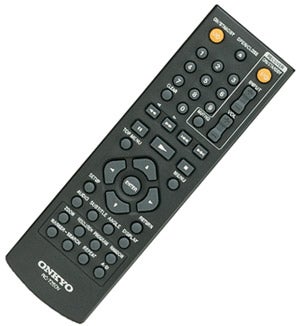 But all is forgiven once you clap eyes on the player’s pictures. A run-through of ”King Kong” demonstrates its superb 1080p upscaling, with this tricky movie looking clean and artefact-free throughout – a fact made all the more remarkable by the player’s low price tag. Detail-packed scenes such as the Kong/T-Rex face-off or shots of Kong perched on his cliff-top bachelor pad are rendered with impressive clarity, while edges are crisply defined and untroubled by excessive jaggies, ringing or colour bleed.


Decent handling of dark scenes keeps the movie’s creepy caves from looking like black holes, enabling you to pick out those creepy crawlies in horrible detail. Its ability to muster deep, powerful shades of red, green and blue without making nuanced skin tones look unnatural should also be applauded, as should its satisfyingly solid black reproduction, which lends punch and authority to the picture. It lacks the thrilling three-dimensionality of a true hi-def image, and our reference OPPO DVD deck offers a touch more sharpness and depth, but as budget DVD pictures go this is up there with the best.

We can’t fault the deck’s movement handling either. Busy scenes like the still-ridiculous brontosaurus stampede are tracked with fluidity and confidence without juddering or breaking up. It also fared quite well with the Silicon Optix HQV Benchmark disc, passing the detail, flag and colour bar tests, although jaggies were evident on the rotating bars pattern.

Movie sound is superb through our test system, and although stereo CDs playback lacks the sparkle of a good CD player, its open and distinct nature makes for a pleasing listen. The Onkyo handles Stevie Wonder’s ”Fulfillingness’ First Finale” with delightful poise and potency, teasing out most of the background detail in his multi-layered compositions.


The DV-SP406’s smooth, assured pictures, solid range of connections and healthy format support make it a superb choice if you’re buying on a budget – provided you can tolerate the fiddly remote and lacklustre build quality. It won’t be long before you can buy a Blu-ray player for the same amount of money (you can already find the Samsung BD-P1500 for £165 online), but when that’s the only reason we can think of not to buy one, then you must be onto a winner.