From a pure mechanical perpective, Oninaki is arguably the strongest card yet to be dealt by Tokyo RPG Factory. It remains loyal to the traditional JRPG structure its previous titles have abided by while taking brave strides towards meaningful evolution.

While it hasn’t been subject to the critical acclaim of classics that inspired it, Tokyo RPG Factory has been waving the flag of traditional JRPG design for many years now, producing efforts that echoed the golden age of Dragon Quest and Final Fantasy.

I am Setsuna and Lost Sphear struck a chord with genre purists, awash with impressive storytelling and robust, traditional mechanics that would’ve fit right in 20 years ago. This dedication to such a specific time in gaming history was a double-edged sword, drawing in the familiar while doing little to bring newcomers into the fold.

Now, in comes Oninaki, an experimental foray into the JRPG landscape that once again bathes freely in tradition, yet isn’t afraid to dip its toes into more daring waters this time around. It’s a tragic, emotional and wonderfully thoughtful adventure, placing a focus on mortal themes that will resonate with everyone.

But is this enough? From what I’ve played so far, it just might be – striking a careful balance between the annals of history it draws from so gleefully, while looking forward at progressive ideas. Obviously this isn’t the most visually spectacular and mechanically transcendent RPG of the generation, yet is still shaping up to be a melancholic adventure worth taking. 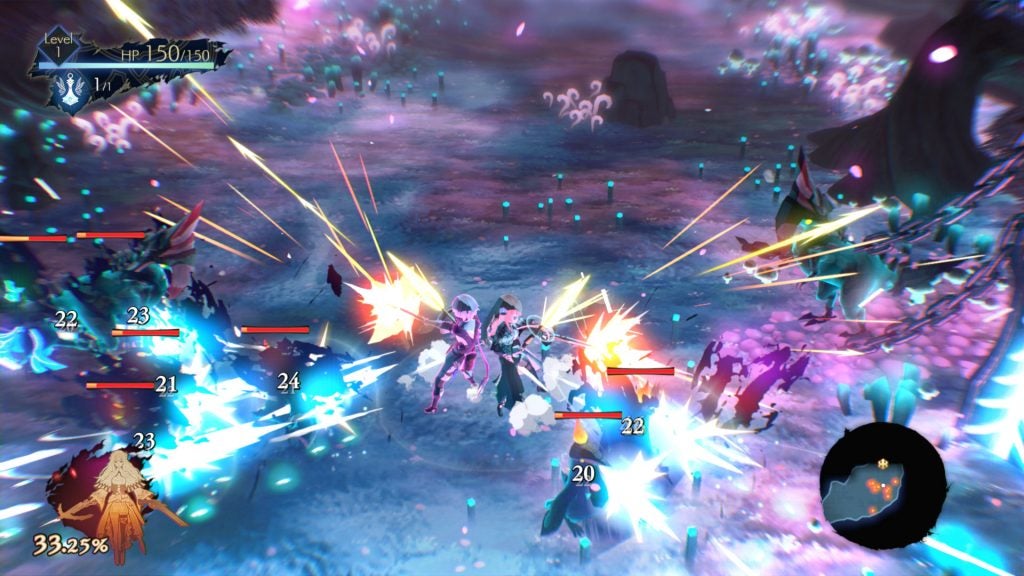 Dozens of enemies can fill the screen at once, leading to some awe-inspiring attacks

Oninaki puts you in the shows of a Watcher known as Kagachi. He’s an ethereal warrior who must maintain the balance between life and death in his world. The tenets of reincarnation must be upheld in a world where people are forbidden to mourn the loss of loved ones, otherwise they risk being turned into deadly monsters that never truly find peace in the afterlife.

Kagachi can travel inside the mortal realm and transport himself to The Veil, a different plane of existence where lingering spirits and grumpy monsters roam. While exploring towns and dungeons you can switch between these two instances at the touch of a button, leading to the discover of some hidden creatures and modes of progression previously unknown.

It’s a simple idea, but it’s executed in a way that’s integral to the narrative, thus feeling genuinely impactful. When inside The Veil, different impacts are placed on combat, such as enemies being thrust away with every strike or a greater chance of landing critical hits. These work both ways though, and sometimes I found myself stricken with ailments that made navigating The Veil a devious challenge in itself.

Flipping between two different planes of the same world adds an essential layer of variety to an otherwise simplistic combat system. Kagachi is no mere soldier, capable of summoning spirits known as Daemons to assist them in battles. These are spirits that, for whatever reason, have failed to find peace in the afterlife – lingering between the lines before finding salvation as your comrade. 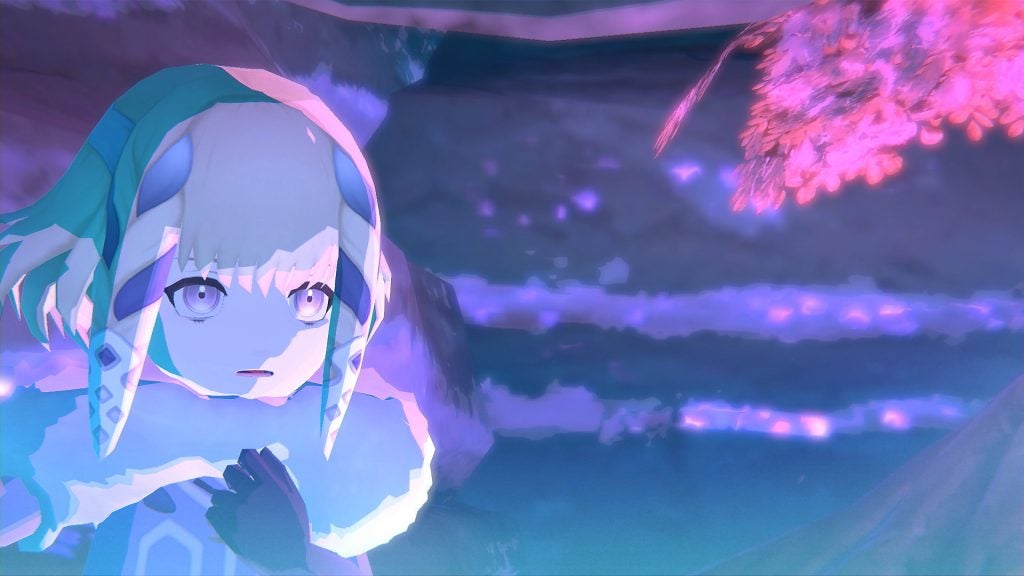 This little girl is somehow linked to your past, acting as one of many mysteries throughout Oninaki

Each of them have their own unique weapons complete with skill trees abundant with abilities you’ll unlock as the story progresses. Daemons are far more than meagre palette swaps, acting as characters themselves, with wants and motivations you’ll learn through unlockable nuggets of lore.

I only saw one example during the demo, which features a fallen princess who failed to find peace due to her family’s unfaltering dedication to the crown. Her life was so strictly dedicated to pleasing her country that she never truly lived, falling into routine until everything fell apart. It was an emotionally resonant glimpse into a life that immediately drew me in.

Fighting enemies is sadly quiet button-mashy, broken apart by the execution of specific skills assigned to each Daemon. These are visually spectacular, capable of wiping out multiple foes at once if performed in the right sequence. It’s a shame that a feast for the eyes doesn’t always translate into a satisfying loop of gameplay. It feels fine, yet the ambitious storytelling Oninaki puts forward is what truly had my attention.

The exploration of dungeons throughout the campaign is broken up by visits to major towns and cities reached either through the world map or making the lengthy trek yourself. These locations are huge and rampant with NPCs to converse with, and hopefully plentiful side quests to embark on in the full experience. I caught a glimpse of one rather sizeable city during the demo, which you can play yourself now it’s available to download. Evil is afoot in the world of Oninaki, and it’s your job to maintain the balance

I could shower praise over a handful of narrative moments in the two hours of Oninaki I’ve played thus far, but one harrowing instance comes to mind. In the opening chapter, Kagachi and his partner come across the ghost of a small boy. Having missed a chance to say farewell to his parents, the boy’s spirit is having trouble passing into the afterlife. So, we embark on a quest to reunite the broken family by any means necessary.

After navigating a small village and besting the opening boss battle, we find the family resting at home. They aren’t mourning, deciding to focus on happiness, so the boy may eventually be reincarnated to a better, more prosperous existence. Once I inform them of their son’s predicament, they decide they want to join him, taking their chances of being reunited in another life instead of living without their offspring. So, they kneel down, and give Kagachi permission to kill them.

It’s a tremendously dark and powerful moment, showcasing how much power Kagachi has in this world when it comes to maintaing the delicate balance between life and death. It also shines a light on how death is perceived, and the trust people put in the idea of reincarnation. I imagine the true nature of this idea will come to light throughout Oninaki, but it plants a foundation brimming with potential to explore characters in a way that goes beyond a traditional structure.

From a pure mechanical perpective, Oninaki is arguably the strongest card yet to be dealt by Tokyo RPG Factory. It remains loyal to the traditional JRPG structure that its previous titles have abided by, while taking brave strides towards meaningful evolution.

This is far more than a love letter to the likes of Final Fantasy and Dragon Quest, boasting mechanical advancements and a narrative ambition that made me a bit of an emotional mess throughout the brief demo.

I do have concerns about the combat becoming repetitive over time, and a few select elements need refining, but if the narrative remains as strong as it is right now, RPG fans are in for an absolute treat.