Feeling the need to buy a universal remote control like the One for All Xsight Plus suggests one of two things – either you have too much money, or too many gadgets. We’re all too familiar with the latter condition, long having had to deal with a lounge inhabited by a handful of different remotes – the one you need invariably being the one that’s mysteriously gone missing. The Xsight Plus will lighten the load on your living room, as it’s capable of replacing a full 12 remotes. 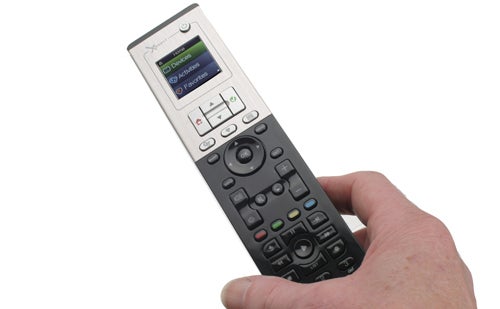 The two-tone design of the Xsight Plus isn’t just a simple aesthetic choice. It also helps to explain how the remote control works. The black bottom half of the controller is home to its standard mappable keys, mimicking the functions of a normal remote control, while the brushed silver top half houses the features more specific to this controller – the colour screen, the menu buttons plus the activities and favourites buttons.


The bottom half of the remote is easily accessible with a thumb when held one-handed, but you’ll need to get your second hand out or shift your grip to get your digits comfortably into the silver “advanced” section. Still, this remote is easier to use one-handed than Logitech’s current range of slightly bulbous Harmony remotes, if much less ergonomically satisfying.

This is no featherweight – it uses four AAA batteries, giving it some significant heft, while the bottom end of the remote is chunky enough to fill a palm. The underside has a rubberised finish to increase friction and feels sturdy rather than luxurious in-hand.


Most of the buttons you’d associate with a remote control are here, including the navigational D-pad, playback controls, numbers, volume and channel rockers. The basics are covered, but why no library button for those with DVRs or PVRs? Buyers of universal remotes are far more likely than most to own these products than the average. 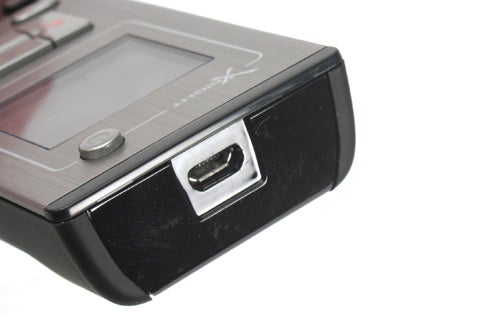 It’s no deal-breaker because any features that can’t be directly mapped onto the Xsight Plus’s bottom black section are ordered into a list within the remote’s brain. You can flick through these additional functions on the colour screen, as well as use them within any macro activities you might need. 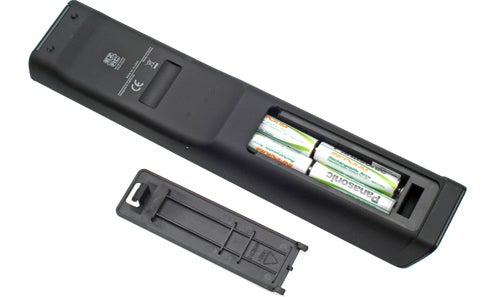 The One For All Xsight Plus doesn’t make a great entrance. It comes packed in near-indestructible plastic packaging that has to be all-but destroyed to win its contents. After a good ten minutes wrestling with this packaging and a pair of scissors, we freed the remote, only to find it doesn’t come with any batteries. And remember – you need a whole four of them. After cobbling together a set of batteries, setting them to charge and fuming for a bit, we returned to the Xsight Plus – and thankfully things instantly got a lot better.

Turn the remote on and you’re asked whether you want to set it up using a PC or not. Opt for on-remote setup and you simply have to test whether a selection of power button functions works for your specific device in order to hone-in on a likely set of compatible commands. This on-remote setup only works for popular-brand devices though. If you have anything you had to seek out from an online retailer because it’s not available on the high street, you might as well head straight for the PC. 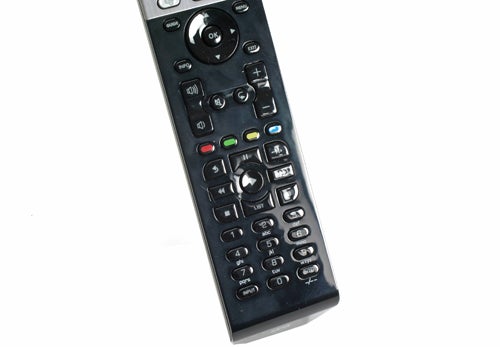 Although the PC software demands an install, it’s actually browser-based in implementation. This is never our preference – a stand-alone application would be more reliable, but the setup wizard is refreshingly matter-of-fact. You type in all your devices, along with their categories, and it’ll tell you whether they’re within the One for All database or not. 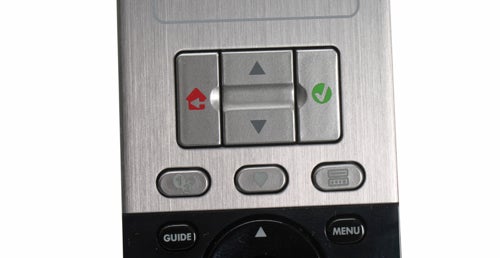 We tried PVRs, media streamers, TVs, games consoles and optical media players and found one missing bit of kit in the software – a new TVonics PVR. We could have guessed TVonics would miss the cut though, as it’s a British manufacturer whose products are not widely available in the ‘states.


Devices that aren’t pre-programmed into the All for One online archive can be learned button-by-button. Once this learning mode is enabled you simply point the original remote at the Xsight Plus, press a button until its signal is picked-up by the universal remote, then press the corresponding button on the Xsight Plus. Any additional buttons can also be programmed into the remote’s menu system, for retrieval using the colour screen. 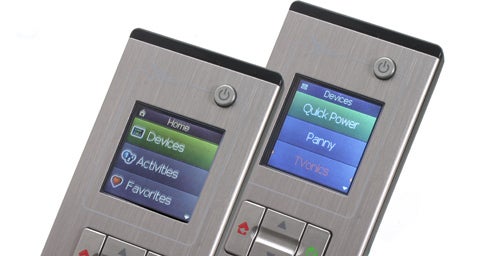 Once all the devices are programmed into the controller, you can get to the real good stuff – activities. These allow you to map different parts of the remote to different devices, each one a different Frankenstein patchwork monster if you will. The D-pad might be mapped to your PVR’s settings, the volume to your home cinema receiver and the number pad to your TV.


You can name these activities as you please too, so not only can they be things like “Watch TV” or “DVR Movies”, you could have ones for rooms of the house, or even members of the family. The 12-device memory means the Xsight Plus can handle a whole house, not just a whole living room.


The true advanced uses of this universal remote come in the form of macros within activities. These one-press functions send multiple commands to your devices, turning them on, setting them to the right inputs and so on. The One for All software sugar-coats this part of the process much less than the rival Logitech Harmony wizard, making it less accessible for new users, but arguably simpler for experienced remote-slingers.


You programme-in each command yourself, along with the millisecond gap between each, as a bullet point-style list. The software itself doesn’t stick its oar in, leaving you to make your own mistakes. If you’re confident enough to know whether your TV needs a half-second or two-second gap between commands, this approach will make setting up the Xsight Plus easy, but for those not at one with their gadgets, the more hand-holding approach of the better-known Logitech Harmony is preferable. 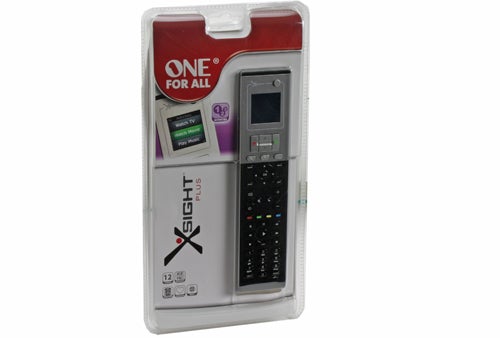 As with almost any universal remote, the setup period is a slog, but once that’s over and perfected the Xsight Plus does what is promises in fine fashion. The screen’s not of great quality, but is clear and offers manual brightness and contrast settings. Thanks to the 4-battery power supply, battery life is good too. We didn’t get to run down the remote’s juice entirely during our testing which isn’t surprising given One for All claims it’ll last for longer than a year on a full charge.


One final feather in the Xsight Plus’ cap is its inbuilt accelerometer which detects when you’ve picked the remote up and turns it on automatically so it’s ready for action as soon as you are. The sensor itself does rattle slightly but this is very small annoyance.


The question of “One for All or Logitech Harmony?” looms over the Xsight Plus – and it’s not an easy one to answer. Rival Logitech controllers offer better ergonomics and slightly prettier looks, but to get one with a colour screen, built-in accelerometer and support for 12 devices, you’ll have to fork out more than a hundred pounds for the Logitech Harmony One. Logitech’s similarly-priced remotes do what they do in style, but they just don’t do quite as much.

The Xsight Plus is a universal remote workhorse. At the price it offers support for an impressive number of devices, and is highly customisable. Comfier, more luxurious options are available, but offer less features at the same price point.