What is the OMSignal Up & Running Kit?

OMSignal is one of the first companies to introduce smart clothing that monitors biometric data and tracks motion.

Sensors woven into the fabric can record heart rate, breathing rate and breathing volume, while a clip-on box captures the sort of motion data you get from wrist-worn trackers such as the Fitbit Charge HR and the TrustedReviews Award-winning Jawbone Up 24.

It comes as no surprise that first-generation smart clothing comes at a price. The Strength fitness sleeve we pulled on over the past few months is the same price as a high-end Garmin Forerunner sports watch.

While there’s no doubt this is the next evolutionary step for fitness-focused wearables, OMSignal’s first attempt proves there’s still work to be done before smart clothing becomes a permanent fixture in your wardrobe. 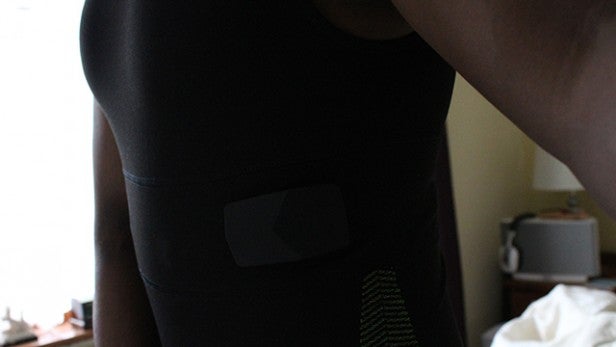 OMSignal’s problems begin with the fit. This is a smart clothing range not made for all body types. If you’re not already super-slim or very athletic, you’re going to struggle to get this sleeveless vest on and then back off after a sweaty workout. There’s also only a range for men right now, although a collection for women is in the pipeline.

That troublesome fit is down to the compression design used to ensure the built-in sensors are close enough to the body to record the biometric data. We spent many a post-workout session struggling to get the sleeveless vest over our head, leaving it frustratingly stuck halfway up our chest. 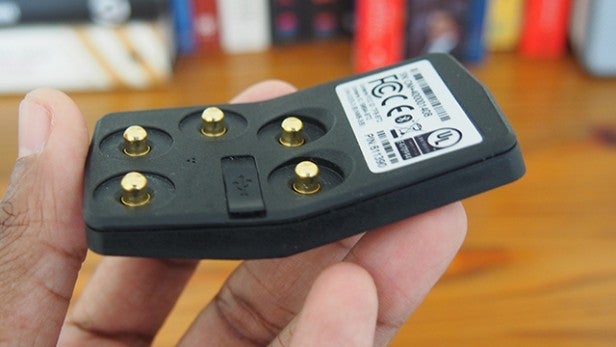 It’s also designed to be worn all day under your clothes, but its tightness means it’s unlikely you’ll want to. It gets a little better as it wears in over time, but there’s no way of telling whether the strain of pulling it off your body impacts on the reliability of the sensors.

If you can live with the seriously snug fit, the materials are comfortable at least and don’t feel itchy to wear. OMSignal uses a mixture of Polyester and Elastane, which are the same materials you can find in a lot of fitness clothing from the likes of Nike and Adidas. It also uses moisture-wicking fabric to help keep you cool when you’re getting a sweat on, and offers odour control thanks to the use of anti-microbial fibres.

The tech that makes this clothing smart can be found on the inside of the vest. Here you’ll find two strips of white material where the electrodes live. These sit just below the chest muscles, in a similar fashion to ECG heart-rate chest straps. The OMSignal range uses the same method of measuring electrical activity of the heart to record BPM (beats per minute). Breathing-rate sensors are woven into the fabric and can recognise when the ribcage is contracting and expanding. This delivers information on respiratory rate and the depth of each breath to measure how hard the lungs are working. 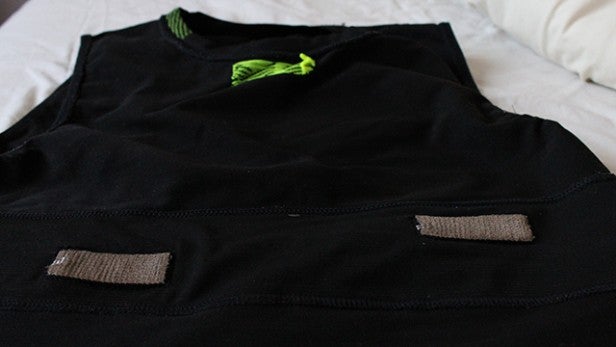 Movement tracking is done via a 3-axis accelerometer fitted inside a small clip-on black box. This box can fit comfortably inside the palm of your hand and is extremely light and unobtrusive to wear. There’s not much to it apart from the small compartment that hides away the Micro USB charging port. This also includes the transmitter and a non-removable memory card to store up to 30 hours of data.

The black box clips into the front of the vest via a series of jacket-button-like poppers and never fell off during our testing. It’s rain-, splash- and sweat-resistant as well, and can be clipped into other clothes in the OMSignal range. Before you throw the shirt in the washing machine, however, you’ll need to remember to clip out the box.

To get the most out of your OMSignal clothing, you need to have your smartphone nearby – specifically an iPhone, which is currently the only compatible handset. Without the OMSignal iPhone app, there’s no way to view real-time data and reports. There’s no third-party support just yet, although there are plans to release the API and that’s something it dearly needs. We’ve used the app before and after the latest major software updates and it’s still a frustrating experience overall.

Once you’ve downloaded the app there are a few steps needed to link your phone via Bluetooth 4.0 to the black box that clips onto the shirt. If you haven’t charged the box or it’s at less than 30%, syncing isn’t possible. Fortunately, it only takes around 15 minutes to gather enough power to get syncing. 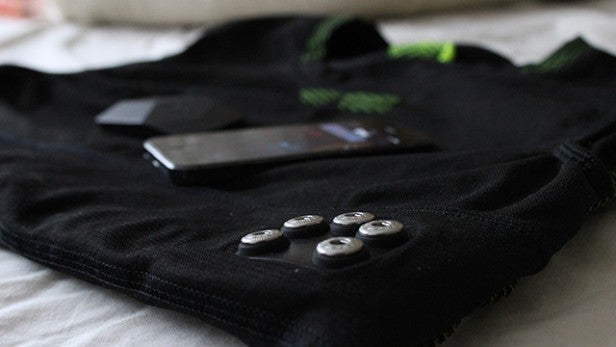 Inside the app, things are kept relatively simple. The main OM Live screen displays heart rate, breathing rate average and step count/calorie burn in three big coloured circles. You can move these around to make one more prominent than the others, but it’s annoying there’s no way to resize the circles to fit them all neatly onto one screen.

In the Fitness section, it’s all about setting up training based around working in specific heart-rate zones. Pick the heart-rate zone you want to work in and then how long you want to be in that zone, and once the shirt and box are on, you can start training. If you don’t have your iPhone packed into an armband, it’s going to be difficult to see your real-time progress and this is where the app is screaming out for voice prompts. 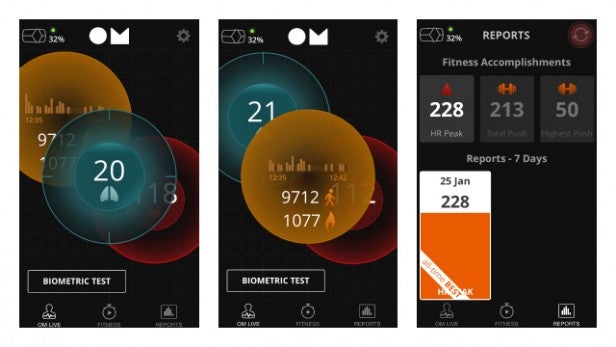 The last section in the app is Reports. This is where you can see a breakdown of daily totals and training sessions. Fitness Accomplishments calculates peak heart rate along with total push and highest push. Push is a strange metric to record, and relates to the rise and fall of your heart rate during a training session. It’s no surprise to see it removed from the latest app update.

Below those accomplishments is the 7-day report to outline daily activity. In the latest update, reports can be synced automatically once you have the clothing on, and they update every five minutes. Reports can be opened and expanded to provide a complex analysis, including heart rate, heart-rate zones worked in during the workout, steps, calories and push. 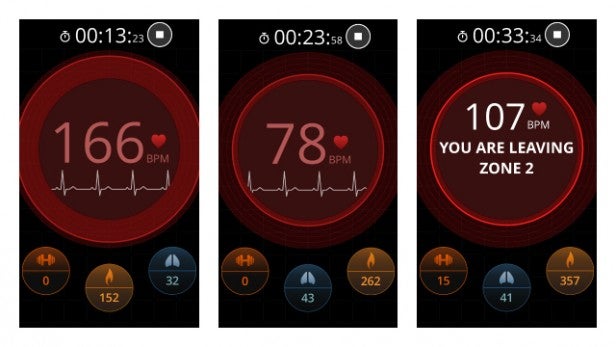 On the heart-rate graph you can swipe through to see the entire workout to pinpoint peak HR points or where intensity has dropped. This is also combined with breathing rate data. This data is broken down into average rate, balance and depth. The correlation between heart-rate data and breathing-rate data helps to identify whether your breathing is consistent and not irregular, to ensure you’re getting the most out of your workout.

Digesting the data and understanding what it means is no easy task. The bigger problem, however, is that after the seven-day report period, the data disappears. It’s not backed up anywhere, making it impossible to really understand progress over a long period of time. This is a massive oversight from OMSignal.

Before you can start tracking, you’ll need to go through a short biometric test. This is a brief video-based tutorial guiding you through a series of exercises to help analyse your current state of fitness. We had to take the test a couple of times, as the OMSignal clothing didn’t register a score on the first test, setting the tone for the tracking inconsistencies we encountered later on. 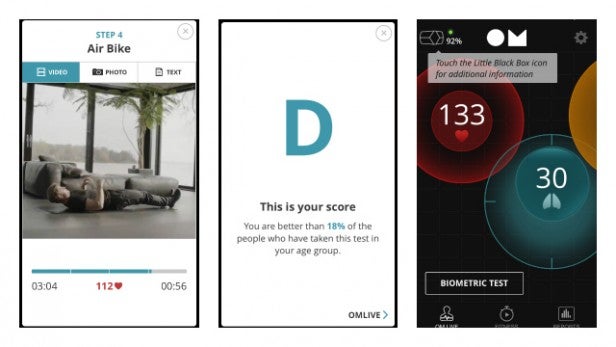 Those tracking problems are more of an issue with the heart-rate tracking, but overall it’s very temperamental. In our first few tests, it worked with no problem, but its reliability waned over time.

Despite wetting the white material strips containing the electrodes, as suggested, the ECG sensors consistently struggled to pick up a signal. Sometime they’d pick up 10-15 minutes into a workout and other times they simply didn’t work. Despite the box being securely clipped in and our iPhone 5 running maintaining its Bluetooth connection, the shirt did not get up and running as regularly as we’d like. 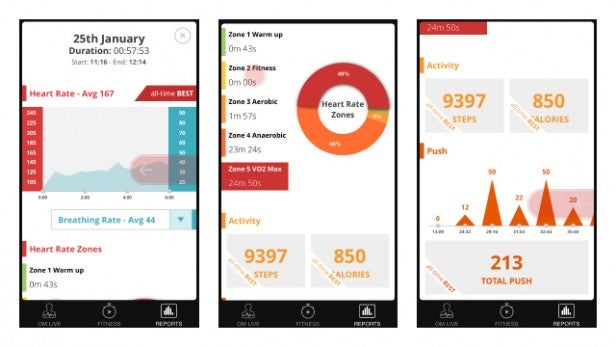 For the occasions when it did work, we tracked the distance and heart-rate accuracy against the Adidas MiCoach Fit Smart, Mio Fuse and TomTom Runner sports watches. Below are screenshot comparisons with the MiCoach app synced with the MiCoach Fit Smart band show are that measurements are consistent and accurate, so it’s disappointing that the clothing wasn’t always up to the task. 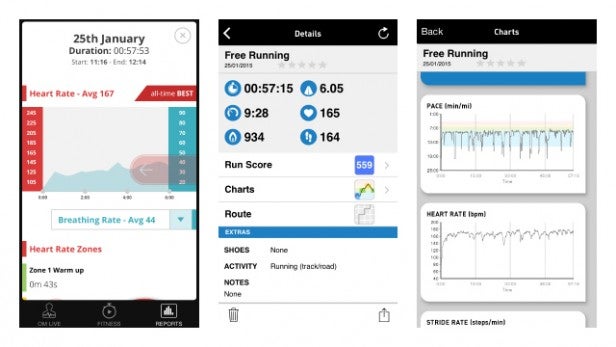 When it comes to battery life, the OMSignal’s little black box can go for one day or ten one-hour sessions. Running for an hour, the battery drop-off is about 10%, so it doesn’t drain quickly. After running a half marathon, it was down to about the 50% mark.

What’s more of a problem is the lack of an on/off button on the black box. What that means is that if you leave it connected to the phone when you’re not wearing it for the whole day, it quickly runs out of battery. It’s a quick charger at least, taking around 15 minutes to give you 40-50% charge.

The app keeps a check on battery status, but the black box could really do with a battery life indicator. 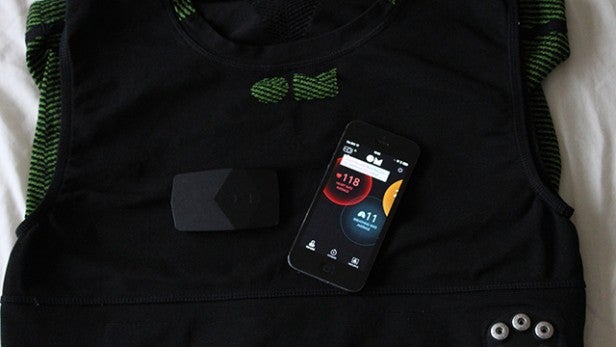 Should I buy the OMSignal Up & Running Kit?

Smart clothing is one of the most exciting developments in wearable technology and will surely one day replace the more casual data tracking currently delivered by the likes of Fitbit and Jawbone.

While OMSignal’s clothing was fascinating to try out, there are far too many issues to recommend spending your money on it. The fit needs to be far more accommodating for the not so super fit, the tracking reliability needs some work, and the app experience needs to improve.

At the moment, there are very few smart fitness clothing ranges to consider as an alternative, and it might be a couple of years yet before we see something truly great. Companies such as AiQ and Cityzen Sciences are working towards a solution that addresses the issues with fit and reducing the size of the hardware needed to record the data, so hopefully it’ll be sooner rather than later.

OMSignal will surely play a part in the next generation of wearable technology, but it needs to learn fast from this first attempt, otherwise it’ll get left behind.

Smart fitness clothing is the future, but OMSignal’s system needs a lot of work before you throw it into your gym bag.