What is the Olympus Tough TG-5?

As its name suggests, the Tough TG-5 is a tough, rugged compact camera designed to be used in conditions that would render other point-and-shoots a pile of useless plastic.

Waterproof to 15 metres, freeze-proof to -10ºC, crush-proof to a pressure of 100kg, sealed against dust and sand, protected against drops of up to 2.1m, and equipped with anti-fog glass over its lens, it’s also notable for its large-pixel 12-megapixel sensor. The latter has been picked to improve low-light performance, and the ability to capture both Raw files and 4K video.

Available in red or black finishes, the TG-5 includes a 4x optical zoom lens, built-in Wi-Fi and a host of sensors including GPS, compass and thermometer. It weighs 250g, including a battery and SD card. 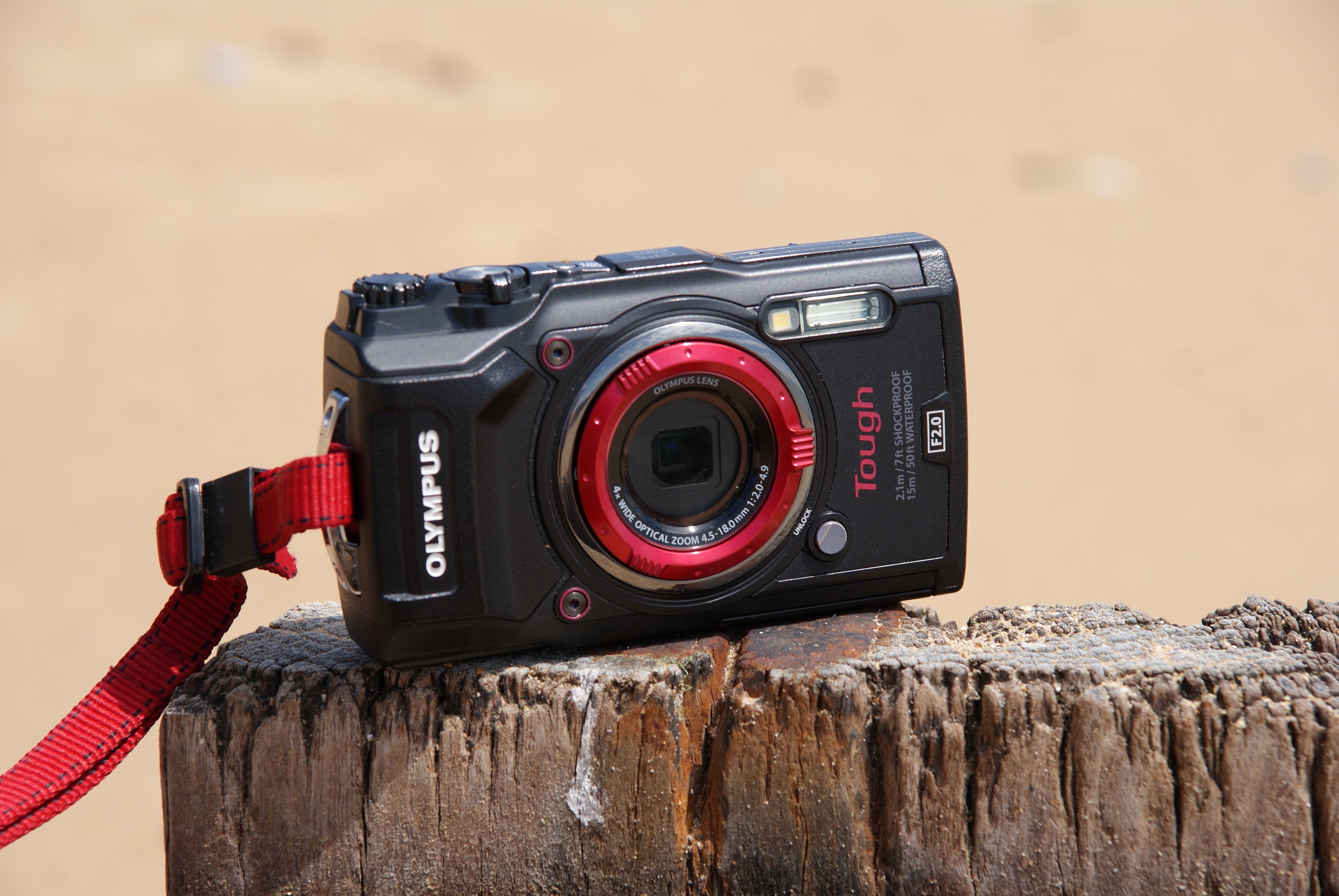 Almost all waterproof cameras are designed to look the part, and the TG-5 is no exception. It’s an angular affair with plenty to grip onto. It sports a striking red/black colour scheme, but it isn’t overly showy or chunky, and will fit into a trouser pocket without digging uncomfortably into your thighs.

The camera keeps its connections and slots for its card and battery under double-locked, rubber-sealed doors, to keep water and dust away from the precious innards. There’s a pleasingly thick cord to loop around your wrist, too.

But perhaps the most interesting aspect of the physical design is the removable ring surrounding the lens. Twist this off and you can screw on an optional fish-eye lens, telephoto converter or ring LED light for illuminating ultra close-up macro photos. While we couldn’t test any of these accessories for ourselves, they appear to add valuable ammo to the TG-5’s creative arsenal.

Another optional extra is the PT-058 underwater case (available for a hefty £279.99 outlay), which extends the sub-aqua skills of the camera to a depth of 45m, while providing access to all controls and functions.

Feature-wise, Olympus has lavished the TG-5. You can capture video at 4K/30fps for maximum detail, but also at 1080p/120fps if you want smooth slo-mo playback. There’s Raw still shooting, allowing those with editing programs plenty of scope for post-processing, as well as dedicated modes for underwater photography and macro close-ups.

There’s also Pro Capture, which takes a series of frames before you even press the shutter button. The idea being to help you out when you’re trying to shoot a tricky moving target.

The on-board GPS, compass, manometer and thermometer mean you can add all sorts of extra info to your photos. This is perfect, if you’re the sort of photographer who’ll be looking back at your snaps years later and will want to know not only the location in which you took them, but the precise direction you were facing and how warm it was at the time!

The 460,000-dot LCD isn’t the TG-5’s most impressive feature, and rivals such as the Nikon W300 have it comfortably beat in terms of resolution. It isn’t touch-sensitive – you wouldn’t expect it to be, given this camera is designed for underwater use – but it’s reasonably bright and detailed to serve its purpose.

The screen UI can be toggled between several modes by tapping the Info button, including one with sensor-powered spirit levels and one with a light-peaking graph. As someone who shoots canted, crooked shots far too often, I found the former useful – it isn’t a feature you’d find on many compacts. 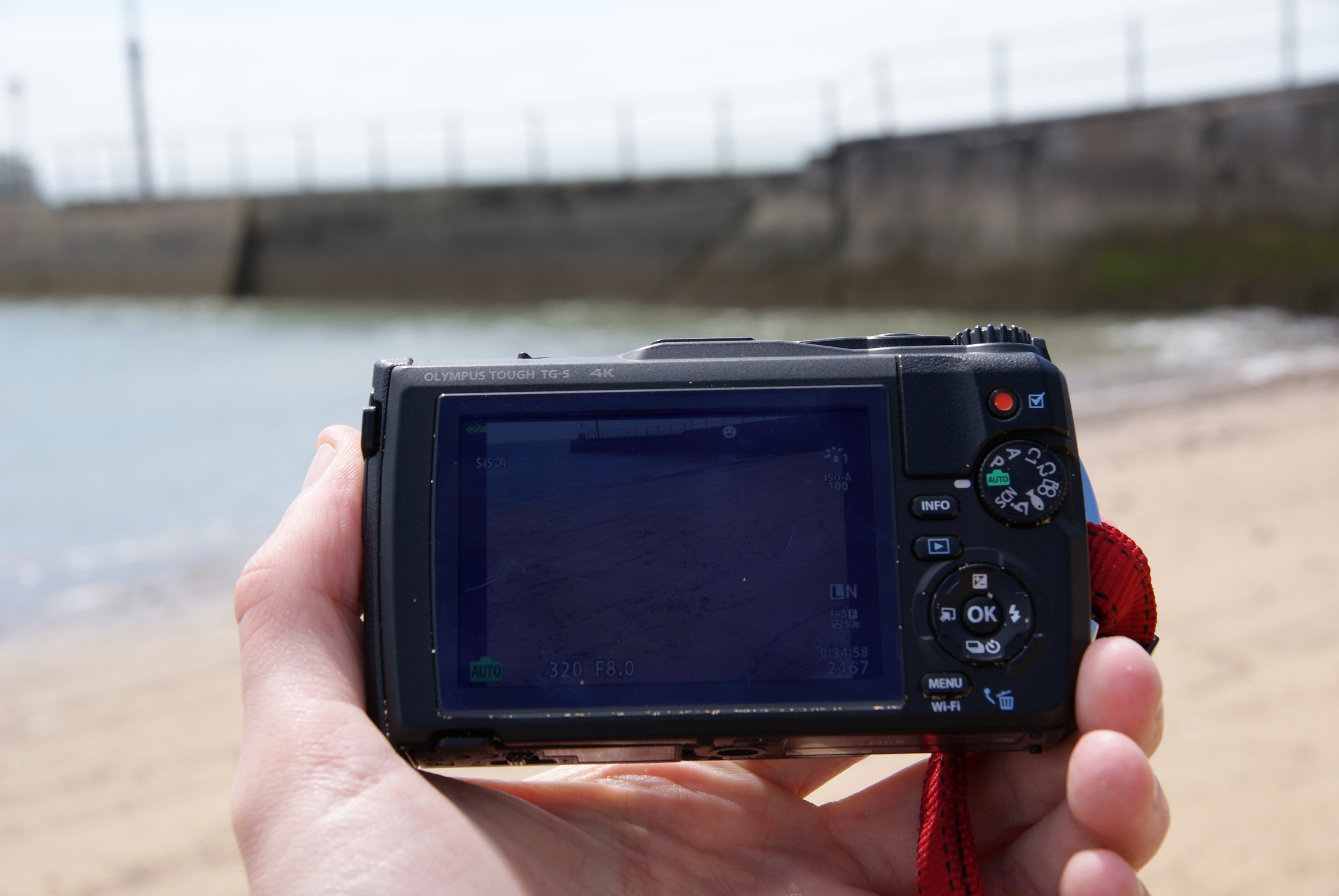 The zoom lever, adjustment wheel and mode dial are all invaluable physical controls to have – and by no means a given on a rugged camera such as this. Most other such models use rockers or buttons to control the zoom, which are more fiddly in use.

However, it’s worth bearing in mind that the mode dial, which lets you quickly switch between the TG-5’s shooting modes (as well as two user-customisable modes), is susceptible to sand becoming trapped behind it. This makes it trickier to turn, until you clean it out with a toothbrush or blower.

On occasion, the autofocus can struggle in low light, but works quickly and accurately enough outdoors. The TG-5 also includes a bevy of manual shooting options (such as the ability to set the ISO sensitivity) that give the user greater control over picture results than other rugged compacts.

That 12-megapixel figure might seem a low number for a camera at this price, but the 1/2.3in sensor uses large pixels that let in more light than comparatively-sized sensors with 16 or 20 megapixels. This, coupled with the maximum f/2.0 aperture, makes the TG-5 a better performer in low light (including underwater) than rivals, delivering punchy shots rather than the noisy, washed-out images you’d expect.

In bright, outdoor light, its shots are lively and vibrant, displaying a decent amount of detail. Zoom right into your JPEGs and there’s some softening and blurriness – possibly partially caused by the extra layers of glass protecting the lens. Viewed at normal size, however, pictures are impressive.

4K video suffers from a similar softening when viewed on large screens, and doesn’t compare in terms of cleanliness or crispness to that recorded on bigger, pricier cameras – although you may actually appreciate the slow-motion mode, which records 1080p video at 120fps for smooth playback. 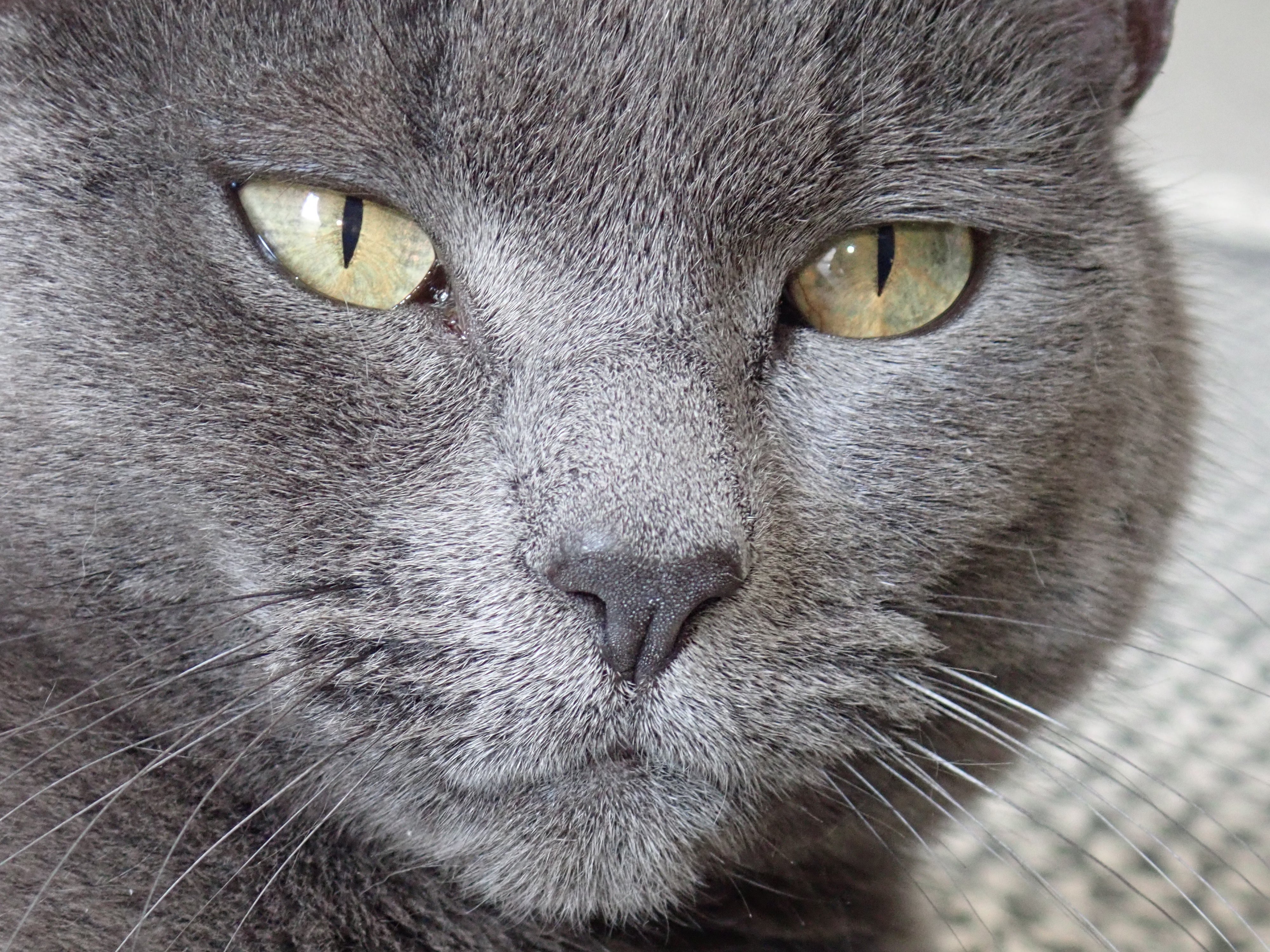 Why buy the Olympus Tough TG-5?

It’s the rugged waterproof camera that offers the best all-round blend of image quality, flexibility and features. Yes, it’s expensive, but if you want more than just a tough compact – you want a compact that delivers on the performance front, as well as survive a white-water-rafting session – then we can’t think of a better model.

The only advantage other models like the Nikon W300 and Fujifilm FinePix XP130 have over the Tough TG-5 are screen resolution and slightly longer zoom reach, but Olympus’ mixture of performance, features and design remains the gold standard in this category.

Despite some fresh 2018 competition, the TG-5 is still the standout among rugged compacts – it packs strong image quality and more features than any other model around.