It’s interesting that I should have this camera to review immediately after the Canon PowerShot S80, because the two cameras are very similar in many ways. They are both mid-market models designed for the keen photographer who wants SLR-like creative photographic control in a compact camera. They both use the same Sony 8-megapixels CCD, and they both have big 2.5in 115K pixel LCD monitors. Comparing the two cameras however shows how differently Canon and Olympus have approached the same design criteria. 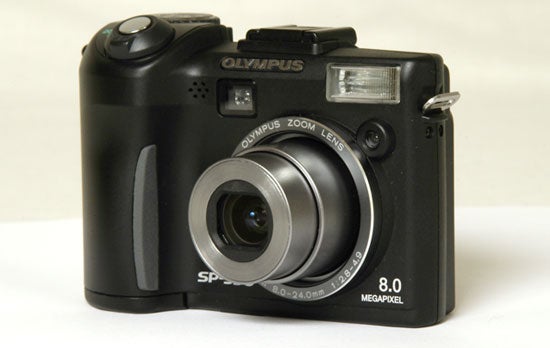 For starters there’s the price. The SP-350 costs £309.99, less if you risk grey imports and shop around online, making it about £190 cheaper than the S80. This puts it into a price bracket mid-way between the top snapshot models such as the Mju 800 and semi-pro models like the C-7070, although it is still within the range of most keen photographers. It does offer a good specification for the price, but is it really better than a decent mid-range compact?


Like all Olympus models, the SP-350’s build quality is outstandingly good, and even though it has a plastic body it feels solid and robust. Although it is physically quite a small camera, it has a large sculpted handgrip and is comfortable and secure to hold. Pressing the small and slightly fiddly power button next to the optical viewfinder activates the camera in about 1.5 seconds, a very creditable performance. The main shooting control is the mode dial on the top panel, which offers a choice of full auto, program exposure, aperture or shutter priority and full manual, as well as 24 pre-set scene modes and four use-defined ‘My modes’. 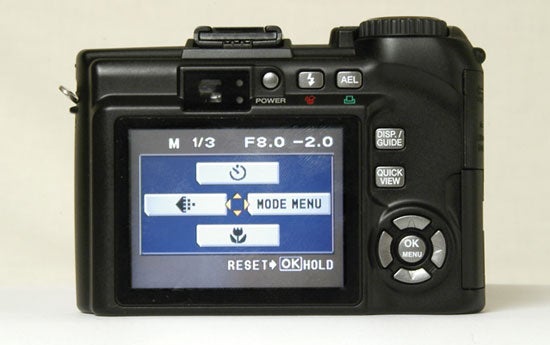 In the three manual modes exposure settings are easily adjusted using the D-pad, which is simpler than Canon’s innovative but slightly fiddly rotating dial. The other controls are kept to a minimum, which is good for simple operation, but it does mean that every time you want to adjust something you need to delve into the menu system. It is possible to reprogram the exposure lock button with one of a range of useful options, such as ISO, drive mode, metering mode, AF mode, noise reduction level and so on, which is a useful feature. Also, exposure compensation is adjusted using the left and right arrows on the D-pad, although these are not labeled. The SP-350’s movie mode is good, capable of shooting at 640 x 480 resolution at 30 frames a second with sound.

In actual operation the SP-350 is good, but not really outstanding. The AF system is a little bit on the slow side compared to some other high-end models, although thanks to an AF illuminator it will focus in low light at a range of a few meters. Shooting speed is limited both in standard and continuous shooting mode, mainly due to the slow write time of the image files, which can be as large as 4.5MB. It takes about four seconds for a file to be written to the xD-Picture memory card, limiting the shooting speed to about a frame every two seconds, with a long pause after four frames as the memory buffer is cleared. To be honest I would have expected better performance from a camera like this. 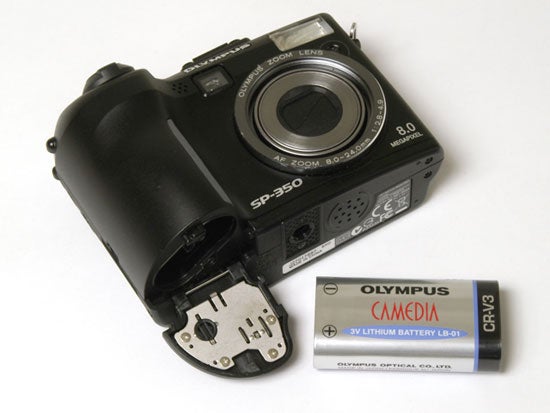 The LCD monitor is large, bright and has a nice quick refresh rate, although at 115K pixels it is not of the highest resolution. Display options offer a choice of a plain view, a shooting data overlay, rule-of-thirds composition lines or a live exposure histogram. It’s just as well that the monitor is good, because the optical viewfinder is horrible. It is small, dim, awkwardly positioned for spectacle wearers, and only shows around 60 per cent of the frame. It is also placed in such a way that, when holding the camera in a normal grip, the knuckle of your middle finger obscures most of the view. 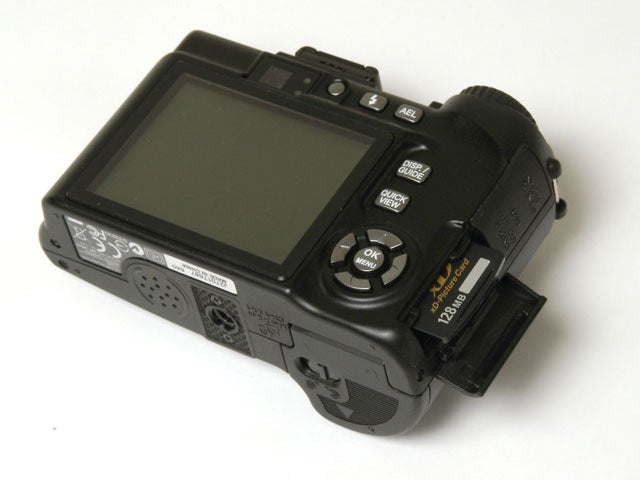 One feature that sets the SP-350 apart from most other compacts is its hot-shoe for attaching an external flashgun. This strikes me as something of an affectation, since if you were to actually attach any flashgun of significant power to such a small camera it makes it so unwieldy as to be almost unusable. I suspect that the hot shoe was added simply to make the camera look more professional. Similarly it has lugs for a neck strap rather than the wrist strap more commonly used with cameras of this size. Just because you hang it around your neck, it doesn’t mean it’s as good as an SLR. If you were to take away the hot shoe and strap lugs and colour the camera silver instead of black, it would really be just another compact, albeit one with a good specification.

In playback mode the SP-350 offers some interesting features. The Edit menu option allows you to crop, resize, adjust brightness and saturation, choose black and white or sepia, and automatically remove red-eye, all of which you might expect, but it also allows you to add a decorative border to your picture, turn it into a calendar, give it a title or make it part of a document layout or contact sheet. These are all clever features, but all of these things can be done better and quicker in image editing software, such as the excellent Olympus Master program that is supplied with the camera.

So, the SP-350 is a mixed bag in terms of performance, so what about picture quality? Here too there are good points and bad points. Olympus metering systems are legendary, so it’s no surprise that colour rendition and exposure are superb. Image noise is extremely well controlled at all sensitivity settings, and shots taken at 400 ISO are quite usable. However there is an overall softness to the SP-350’s images that robs them of a lot of fine detail. The SP-350 does have a RAW mode, but it doesn’t offer any real advantage in overall picture quality. This may be partly down to the lens, but this softness has been reported in other cameras using the same Sony 8MP CCD. The Canon S80 is one of the few cameras using this sensor that manages to avoid the problem, but sadly the SP-350 suffers quite badly. 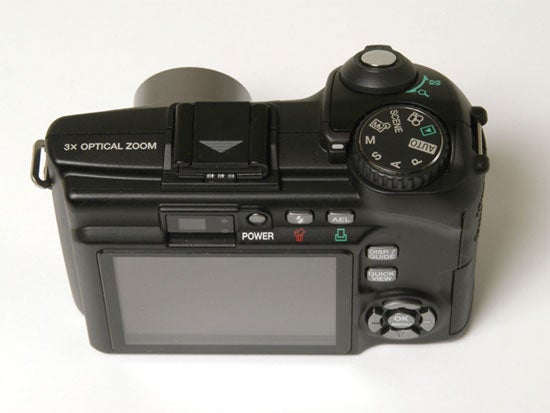 The 3x optical zoom 8-24mm (38-114mm equiv) F2.8-4.9 lens may not be at fault for that, but it does have its own problems. At wide angle it suffers from very noticeable barrel distortion, as well as blurring at the corners of the frame. However its overall performance is good, although not really up to semi-pro standards. In fact, that’s a pretty good summary of the whole camera.


It doesn’t have the performance or picture quality to be the compact semi-pro model that it pretends to be, and it does have a few significant flaws, but nonetheless the Olympus SP-350 is a decent camera, with very good build quality and handling, excellent high-ISO noise control and a useful range of photographic controls and extra features. 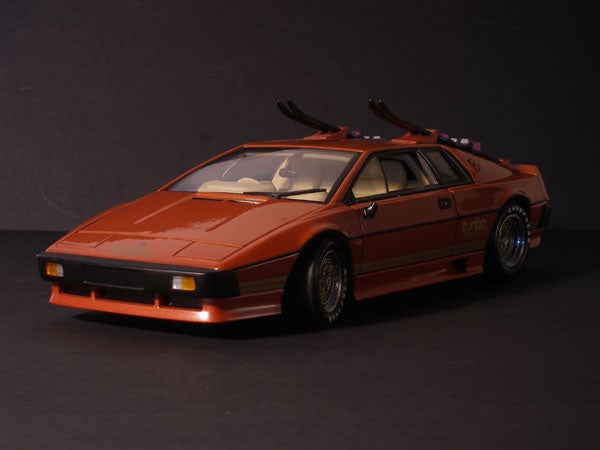 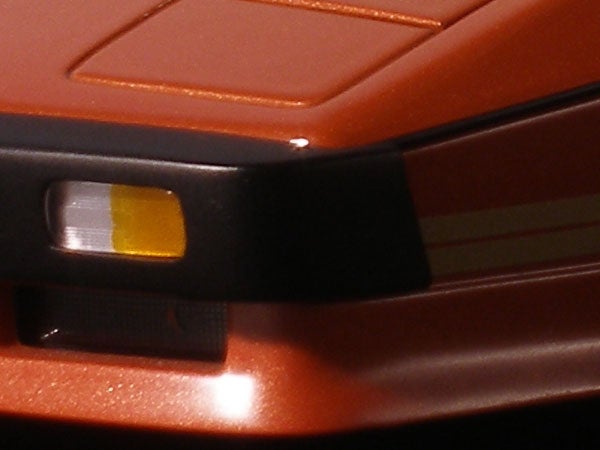 At the minimum 50 ISO setting the picture is silky smooth, with lots of fine detail and perfect colour reproduction. 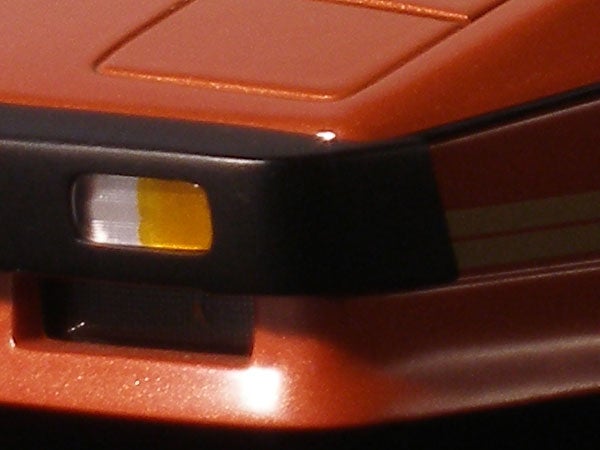 At 100 ISO there is still no image noise at all, and the picture is just as good as the last one. 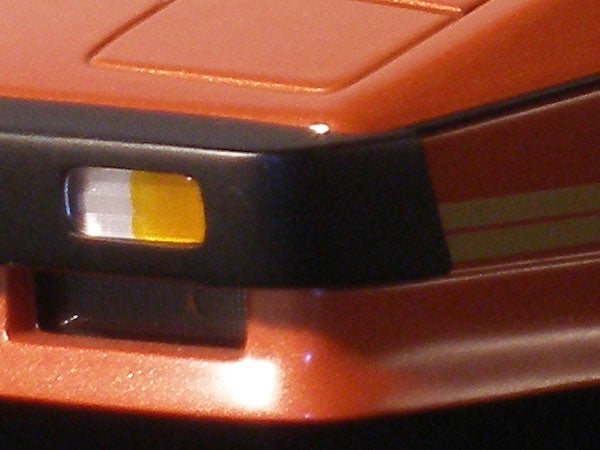 At 200 ISO there is a tiny amount of image noise, but it is very smooth with no colour distortion. 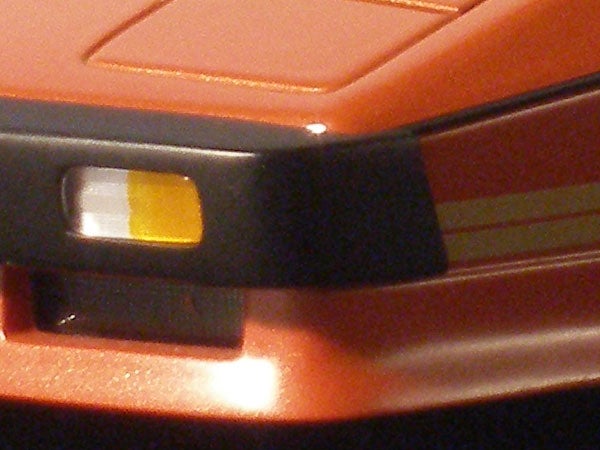 At 400 ISO there is a little colour speckling in the darker areas of the image, and the saturation is reduced, but it is still a good usable shot. 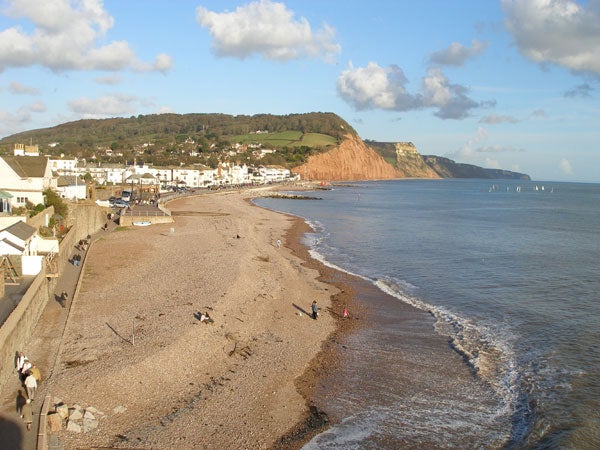 With a short end equivalent to 38mm, the SP-350 is no better than average for wide panoramic shots like this view of Sidmouth in Devon. 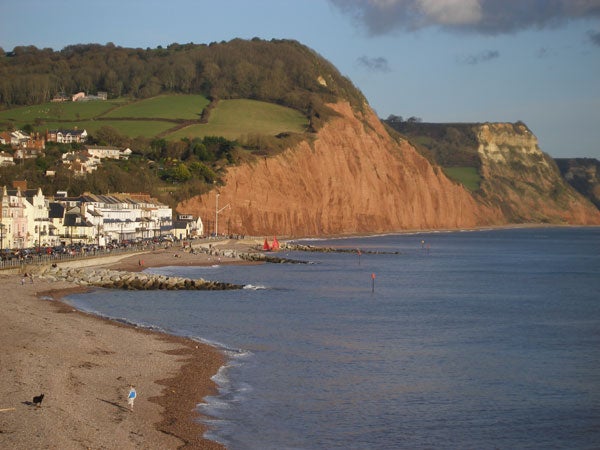 The long end of the 3x optical zoom lens is equivalent to 114mm, again no better than average. As usual, this shot was from the same position as the one above. 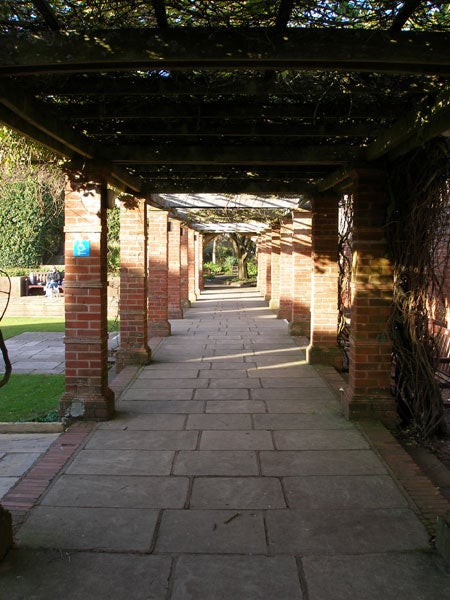 Although the exposure and focusing are accurate, if you look at the top and bottom of this vertical frame you’ll notice the bad barrel distortion of the lens at wide angle. 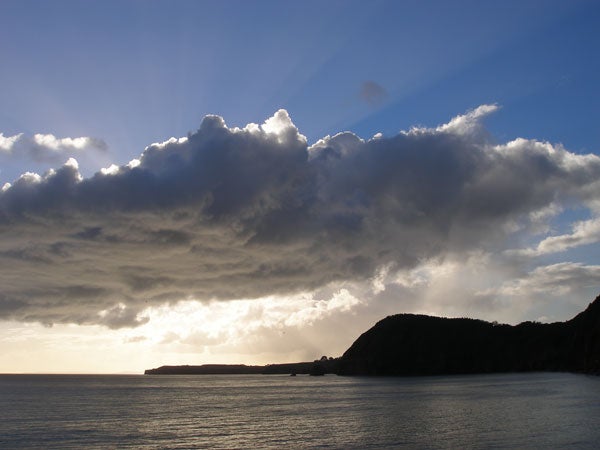 Compare this shot with the almost identical one in the review of the Canon S80. In this case the barrel distortion has caused the horizon to have a distinct curve. 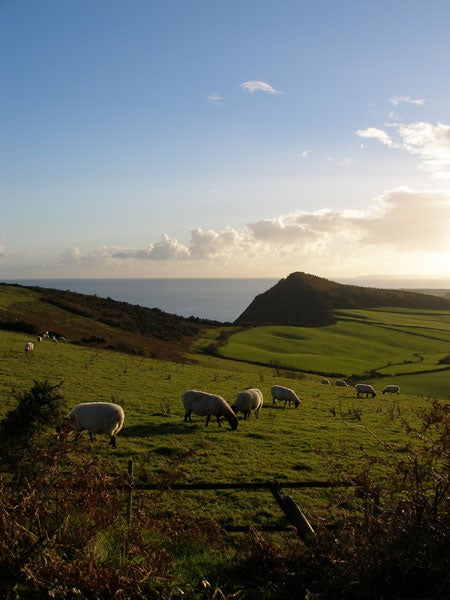 Olympus is justly famous for its exposure metering systems. This very high contrast shot into the light is perfectly exposed despite the difficult conditions. 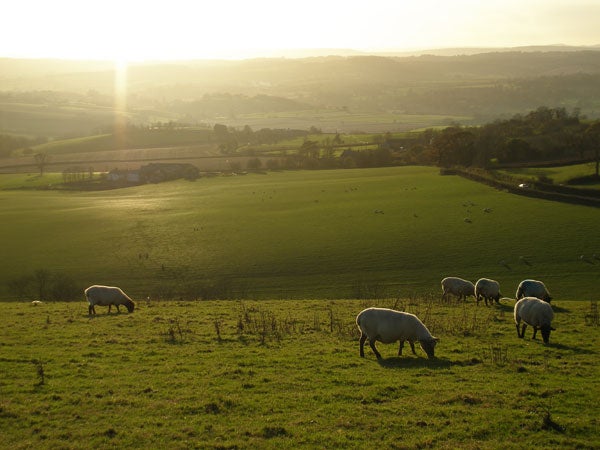 The lens may have barrel distortion problems, but it avoids the lens flare that was present on an identical shot with the Canon S80. 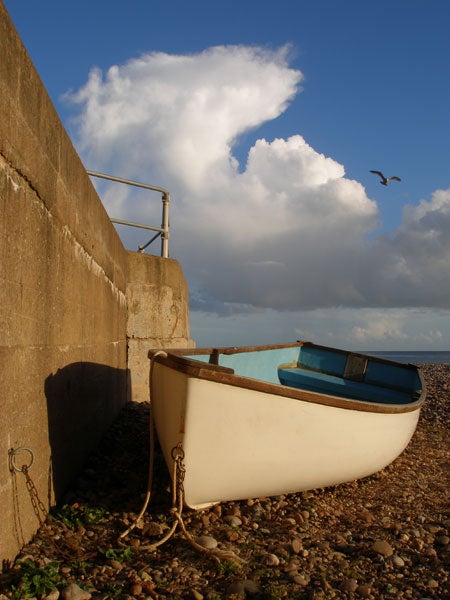 Despite its flaws, the SP-350 is a good photographer’s camera, and with a little luck and patience it can produce some outstanding results, although the overall softness robs this image of some of its impact.