What is the Olympus PEN F?

Olympus was one of the first companies to release a compact system camera, introducing the PEN EP-1 back in 2009. It took its design lead from the classic Olympus PEN cameras from the glory days of film, and since then Olympus has not only evolved the PEN through several iterations, but also launched the SLR-esque OM-D range.

The PEN F is the latest PEN and features even more retro styling than ever, mixing that with a healthy dose of modern specifications that should make the camera appeal to a wide range of users.

It has a 20.3-megapixel Four Thirds sensor, which is coupled with a TruePic VII processor. There’s a huge range of compatible lenses for Olympus cameras, as they’re also compatible with Panasonic’s Micro Four Thirds lenses (along with those from third parties).

Although the PEN F can record video, it’s at Full HD, not the 4K of some of its rivals. Considering this is a camera which very much harks back to the old days, it’s definitely intended primarily for photographers, rather than videographers.

Other interesting features include 10fps shooting, built-in Wi-Fi, an articulated touchscreen and an electronic eye viewfinder. 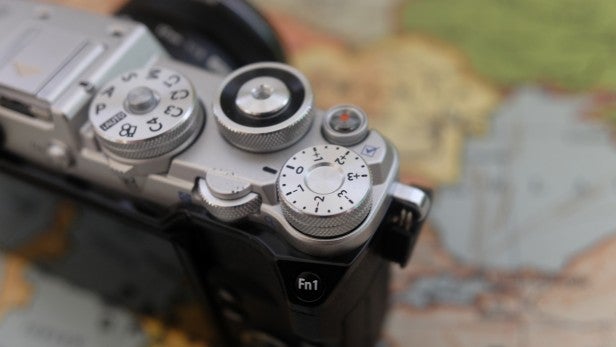 The PEN F’s design is extremely eye-catching, and reminiscent of those PEN film cameras of old. It has a textured coating around the body, which gives it an attractive look and feel. There’s no grip on the front of the camera, but since the overall body size is quite small it’s not too problematic – plus a grip may get in the way of the dial on the front of the camera.

Speaking of dials, this camera is a traditionalist’s dream thanks to the high number of direct-access dials and buttons to change all manner of settings. The dial on the front of the camera allows you to change between the camera’s different colour and creative options, including monochrome or art filters. You can leave it in the middle to use a “normal” setting.

On the top of the camera there’s a dial for switching between exposure modes – such as aperture priority and shutter priority, as well as automatic options. There’s also a dial for altering exposure compensation, and an unlabelled dial which works in different ways depending on the mode you’re shooting in. That last one usually works alongside another small dial at the back of the camera – so if you’re shooting in manual mode, one will control aperture and the other will control shutter speed.

The exposure-compensation dial is easily reached by your thumb and has a good degree of stiffness, which means you won’t accidentally change the setting when you don’t want to. The mode dial has a button in the middle of it which you can press down to lock it, again preventing accidental changes. Just underneath this dial is a switch which you can move to access a curve graph and alter highlights and shadow settings. Finally to the far left of the top plate is the on/off dial – even this has been given a retro appearance.

Flipping to the back of the camera, we have a slightly more modern appearance. There are a few small buttons, along with a four-way navigational pad. Each of the buttons on the navigational pad has its own particular setting, such as ISO and white balance for the up direction, down for the drive mode, left to change AF point and right for flash mode. In the centre of the navipad is an OK button which you can use to confirm changes to certain settings. 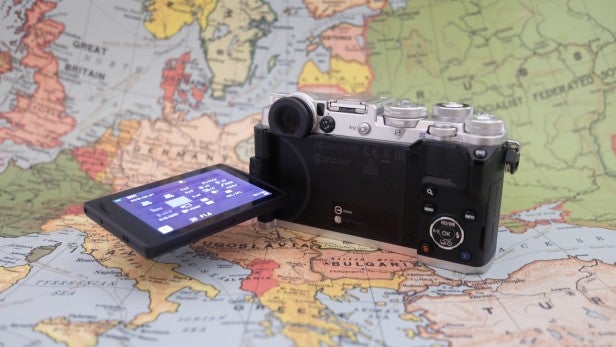 Alternatively, you can also use the OK button to access a quick menu which appears on the screen. You can either navigate around this menu with the buttons, or you can touch each section on the menu to make a change.

The screen is fully articulated and, to take it back to the retro look, you can fold it in on itself. The back of the screen has the same textured coating as the front of the camera, so if you hide the screen you really do look like you’re shooting with an old-school camera.

A small criticism here is that it’s a little bit fiddly grasping the screen to turn it to a different angle – it could’ve done with a slightly larger surface area to help get better purchase on it. The fact that the screen articulates is very useful for shooting from awkward angles, such as from up high or from below. 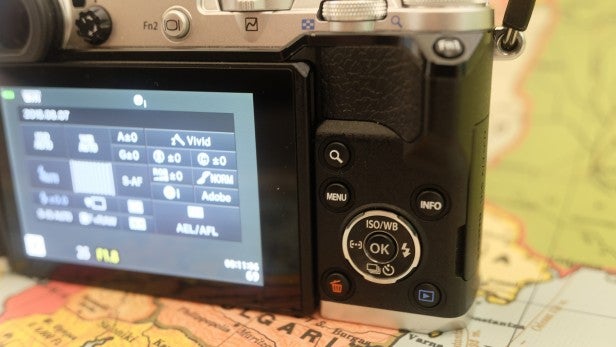 The eye viewfinder has an attractive round design and is padded with rubber to sit comfortably against your eye. There’s also a sensor to automatically switch it on (and the screen off) when you lift the camera to your eye, making for a seamless and natural transition between using the two.

When you’re using the viewfinder you can still use the screen to set the autofocus point, which is useful for quickly switching point without the faff of pressing the various buttons. You need to be careful of your nose touching the screen and accidentally changing the point, though.

The viewfinder itself is relatively small, and although entirely useable thanks to its brightness and high resolution, there are larger ones available on the market.