Just over a year ago I reviewed the Pen E-P1, Olympus’s first foray into the compact system camera market. The review was generally positive, but I criticised the camera’s lack of a built-in flash and relatively high price compared to contemporary DSLRs. Olympus must have been paying attention, because it has recently launched the third model in its Pen E series, the Pen E-PL1, a cheaper, simpler version of the design which does include a neat pop-up flash gun. 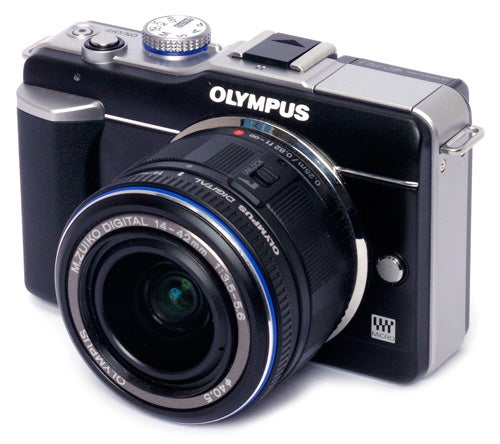 As I’ve remarked in several recent camera reviews, the compact system camera is now a well-established sector of the market and is growing rapidly in popularity, promising as it does the versatility and image quality of a digital SLR with the portability and convenience of a compact. The Pen E-PL1 is certainly more akin to a compact camera than either the E-P1 or Olympus’s more recent E-P2. It is smaller, lighter, and has much simpler controls than its two more expensive stablemates, however it does still offer a good range of features and plenty of creative versatility. 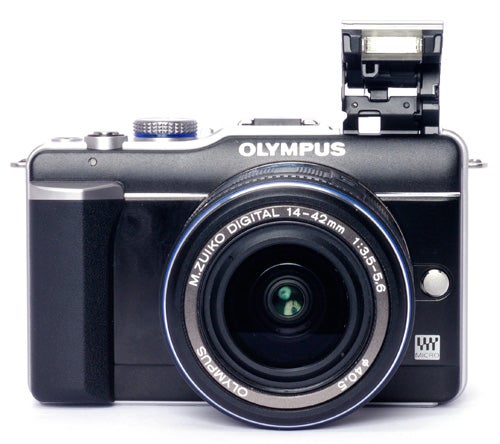 The smaller body of the E-PL1 will inevitably draw comparisons with the brilliant Panasonic GF1, and indeed there are a number of similarities between the two models. Both use the Micro Four Thirds lens mount and sensor system, and they are within five millimetres and 12 grams of being the same size and weight, with the E-PL1 measuring 114.6 x 72.2 41.5mm and weighing 297g body-only, slightly heavier narrower, taller and thicker than its Lumix rival. Both cameras have similar Four-Thirds Live MOS sensors, although the Olympus has marginally greater resolution at 12.3MP. However the E-PL1 is currently selling on the high street for less than £425 with the kit 14-42mm standard zoom lens, considerably cheaper than the GF1, which costs around £550 with a 14-45mm lens. The E-PL1’s other major rival is the Sony NEX-5, which is considerably smaller and better equipped but is also around £100 more expensive.

Unlike the E-P1 and E-P2, the E-PL1 has an all-plastic body available in a range of four colours (silver, white, red or black), but the build quality is good and the camera feels solid and substantial. There’s no real impression of corners having been cut to keep the price down, but the kit lens supplied with the E-PL1 does have a plastic mount rather than the metal mount on the lens supplied with the E-P2. 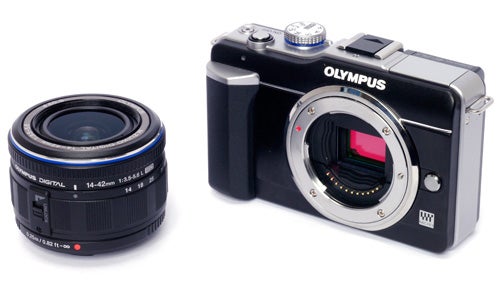 The body design includes a handgrip on the front and a small raised thumbgrip area on the back that provides a secure grip, and the camera is comfortable to hold and operate even one-handed. The external hardware is of good quality, with solidly mounted controls, a metal tripod bush and a durable battery/card hatch with a locking latch. The 2.7-inch monitor screen is smaller than on the more expensive models, but it has the same 230k dot resolution, a very wide viewing angle, fast refresh rate and a good anti-glare surface. The camera has no built-in viewfinder, but it does have a socket just behind the external flash hot-shoe to connect an optional accessory electronic viewfinder. 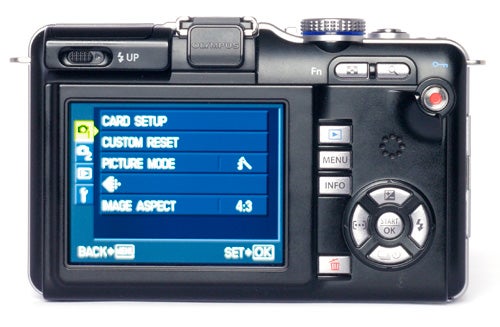 The control layout is much more like that of a compact camera than a DSLR. It has a small shooting mode dial on the top panel, but the rear panel has only a small number of buttons and a D-pad. Main shooting options are selected via a simple on-screen menu similar to the one on the mju-Tough 6020 compact that I reviewed a few weeks ago. It lacks the adjustment wheel of the more expensive models, instead exposure adjustments are made via the D-pad.

The main menu is also more like that of a compact camera, with a somewhat limited range of options. Image aspect ratio can be adjusted, but since the Four Thirds sensor has a native 4:3 aspect ratio this gives the largest picture size. For colour control it has the Picture Mode option, a set of tone adjustment pre-sets that can be customised for contrast, sharpness, saturation and tonal gradation, but that is the limit of the creative control. 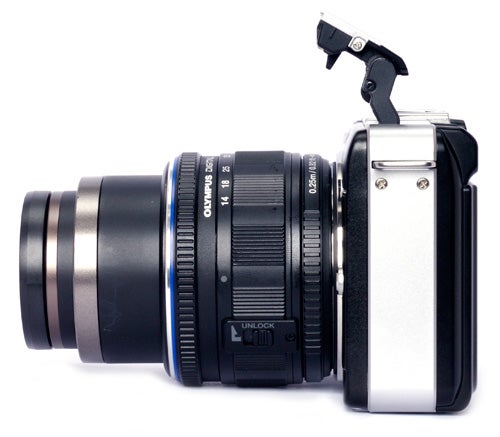 Exposure options are also more restricted than on the previous Pen E series models, with shutter speeds of only 60 seconds to 1/2000th of a second available, rather than the 30 minutes to 1/4000th of a second found on the E-P2. The aperture range of f/3.5 to f/22 with the standard kit lens does at least offer more versatility than most compacts, and both aperture and ISO setting can be adjusted in 1/3EV increments. 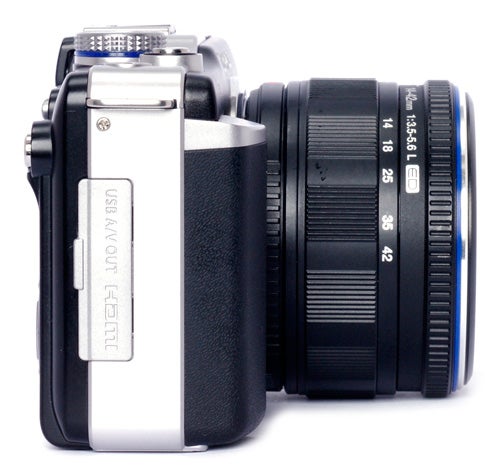 One of the features of the E-PL1 that is significantly cut down relative to the E-P1 and E-P2 is the video mode. It can shoot in 1280 x 720 HD resolution at 30 frames per second, but audio is only recorded in mono, via a small built-in microphone located just in front of the flash hot-shoe. Both video and audio quality are very good, but the microphone lacks directionality, picking up sounds from behind the camera just as loudly as in front. It has a dedicated button to start video recording. Video is recorded in Motion JPEG format, with a maximum recording time of 14 minutes or 2GB.


The range of Pen E lenses is rather limited, with only four currently available, but there are two adapters to allow both Olympus DSLR and older OM 35mm SLR lenses to be attached, offering a much wider range.

The E-PL1’s overall performance is also more like that of an advanced compact than a DSLR. It starts up and is ready to shoot in just under two and a half seconds as long as you remember to manually extend the lens, and the shot-to-shot time in single-shot mode is approximately 1.8 seconds in both Raw and JPEG modes, both respectable times for a compact camera, but pretty slow compared to most DSLRs. The shot-to-shot time is faster than the original E-P1, however. In continuous shooting mode it can manage slightly over three frames a second, although in Raw mode the buffer can only manage 10 frames before it slows down to approximate one frame a second. 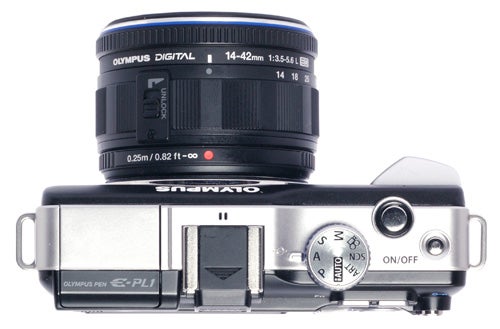 Like the other Pen E cameras the the E-PL1 has a contrast detection autofocus system. It is fast and accurate in good light, but does have a slight tendency to hunt on lower contrast subjects. Low light performance is generally good, but it lacks an AF assist lamp, so below a certain light level it has real problems and it won’t take a picture unless it has focused. The pop-up flash has to be manually raised to work, and is a bit underpowered, with a maximum range of only around three metres, although it attenuates well at close range to avoid burning out highlights.


Image quality is one of the major selling points of this type of camera, and the E-PL1 doesn’t disappoint. The 14-42mm f/3.5-5.6 kit lens lens is excellent, producing outstanding edge-to-edge sharpness and lots of fine detail, and the low compression of the fine picture quality setting gives excellent results. Colour reproduction is superb, with very natural looking tones and good detail even in saturated areas. Dynamic range is also excellent, with plenty of shadow and highlight detail. 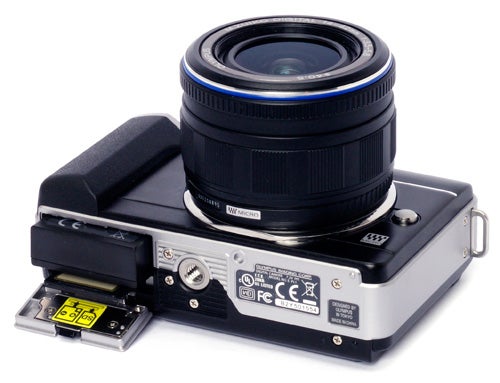 Image noise has been a problem on some previous Four Thirds cameras, but the E-PL1 produces excellent results at up to 800 ISO, with noise only starting to become an issue at 1600 ISO, and even the maximum 3200 ISO setting gives results that would be acceptable on a small print.

The general impression of the Olympus Pen E-PL1 is not that this is a cut-down version of the E-P2, but that it is well-made high-spec compact camera that has been equipped with interchangeable lenses. This is a true bridge camera, even more so than the E-P2, the Lumix GF1 or even the Sony NEX-5. It sits mid-way between compact cameras and DSLRs, offering a good compromise between convenience and creativity, with good performance and superior image quality and at a reasonably affordable price. 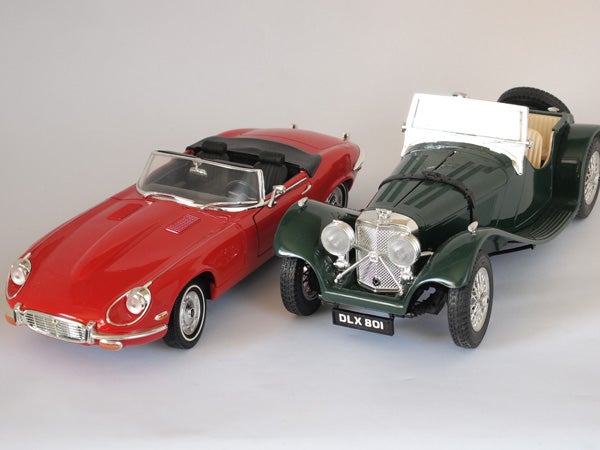 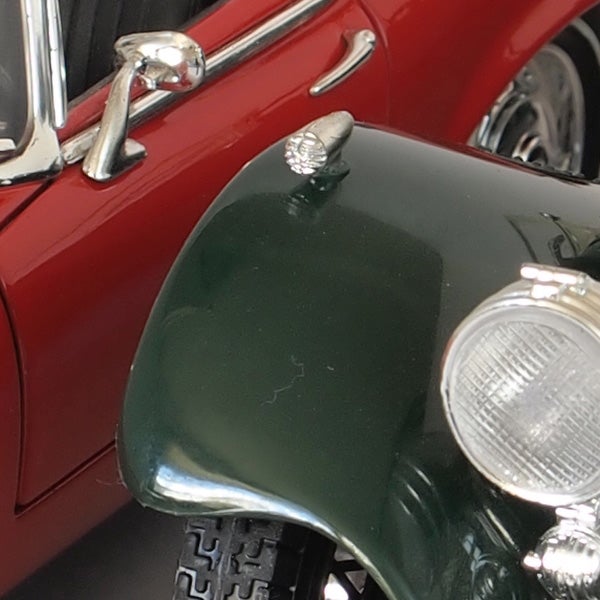 Image quality at the minimum 100 ISO is superb. 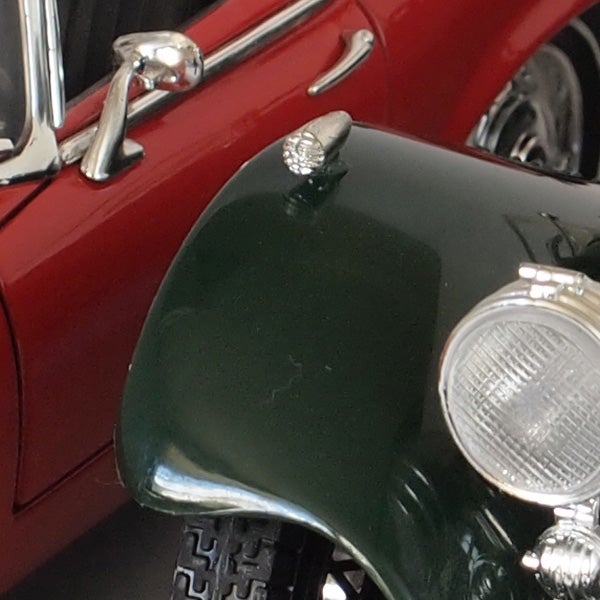 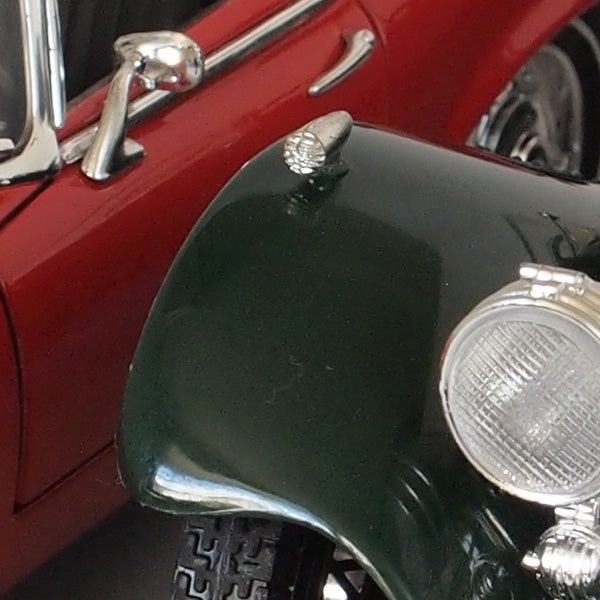 Colour saturation is slightly reduced at 400 ISO, but there is still no noise. 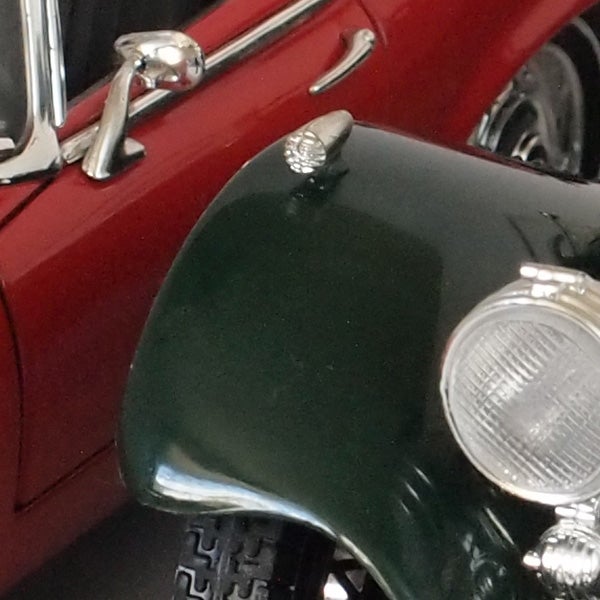 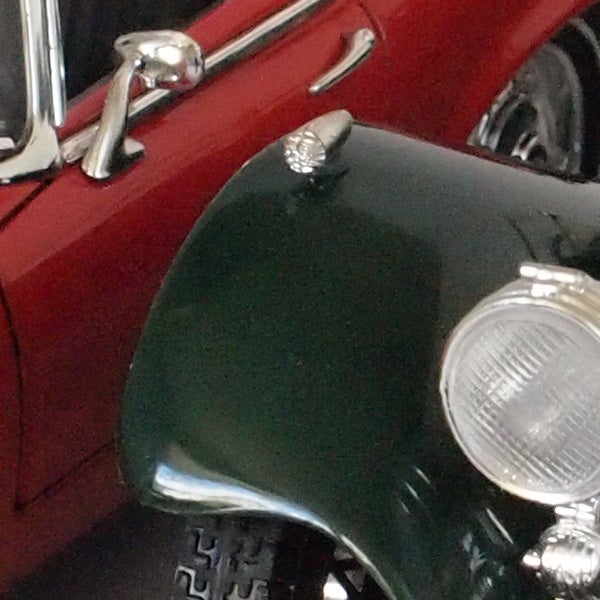 Noise is visible at 1600 ISO, but the image is still printable. 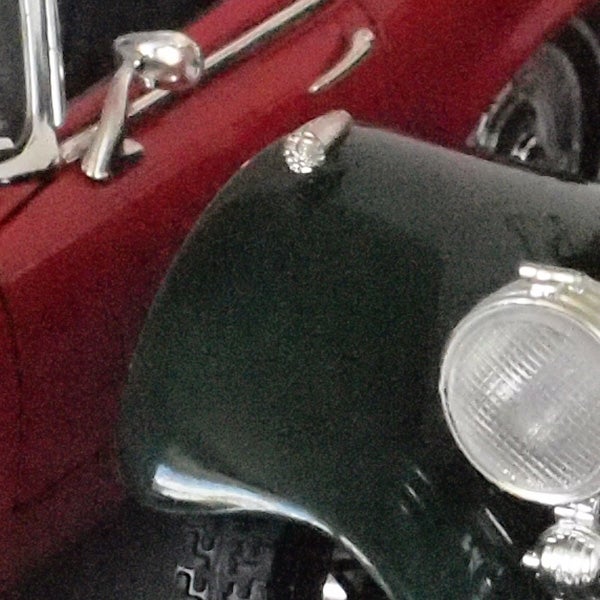 At the maximum 3200 ISO noise is becoming a problem, but it would still be acceptable for smaller image. 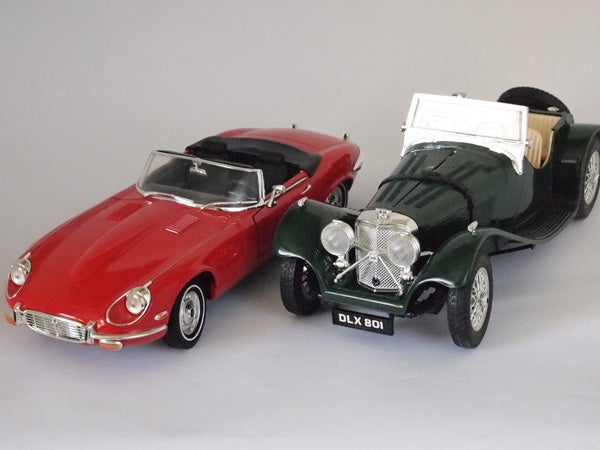 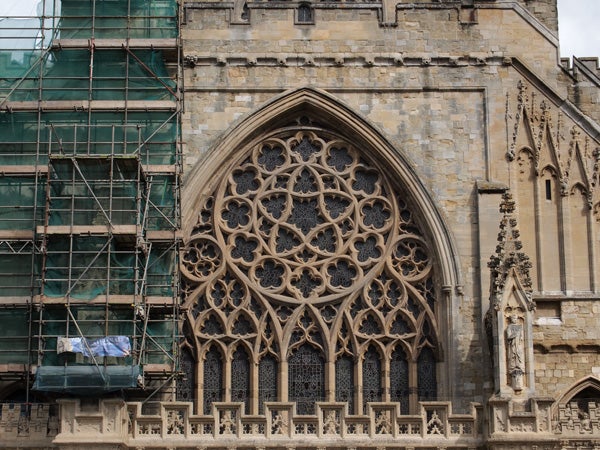 Since the E-PL1 is more like a compact than a DSLR I’ve used my usual detail test shot of the West Window of Exeter Cathedral, for you to compare with other cameras. See below for a full res crop, or click to see the whole picture. File size 5.9MB. 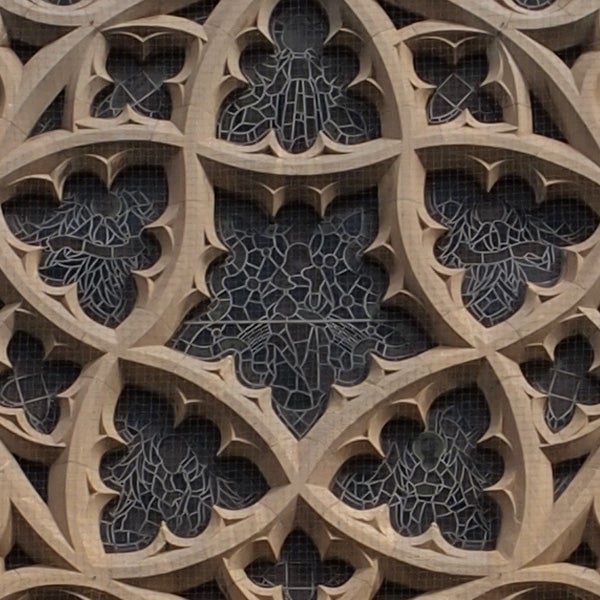 The picture quality from the 12.3MP Four-Thirds sensor is superb, with tons of fine detail and no compression problems. 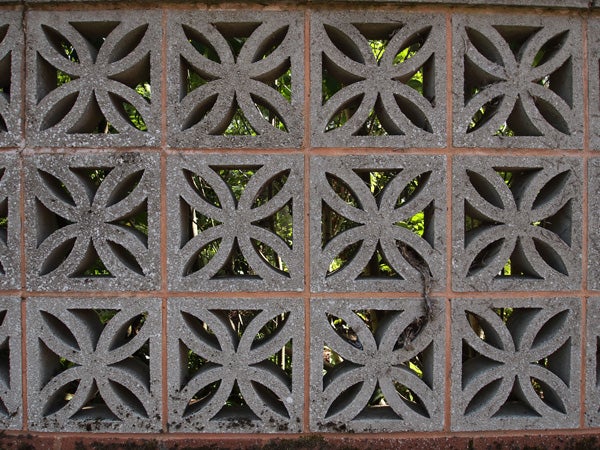 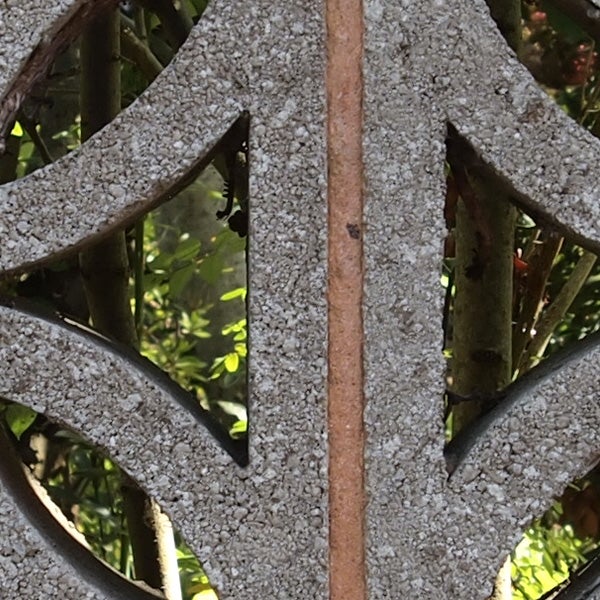 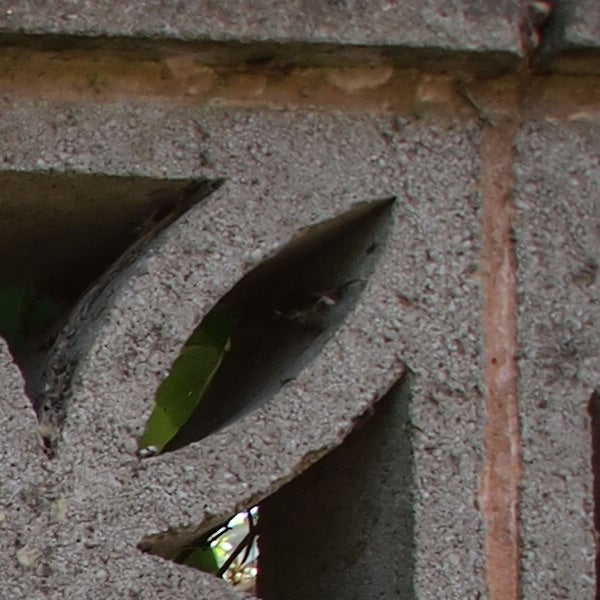 Corner sharpness is also very good, with no blurring and only a hint of chromatic aberration. 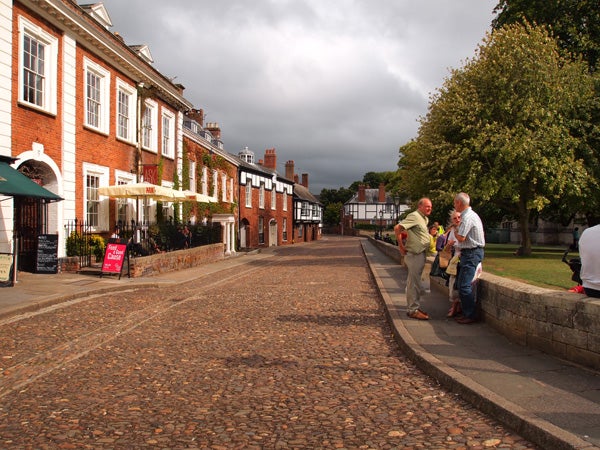 This is the 14mm wide angle end of the lens. 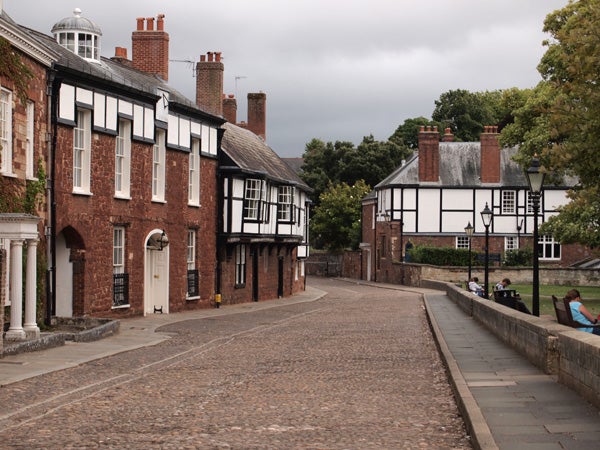 This is the 42mm long end of the lens from the same spot. 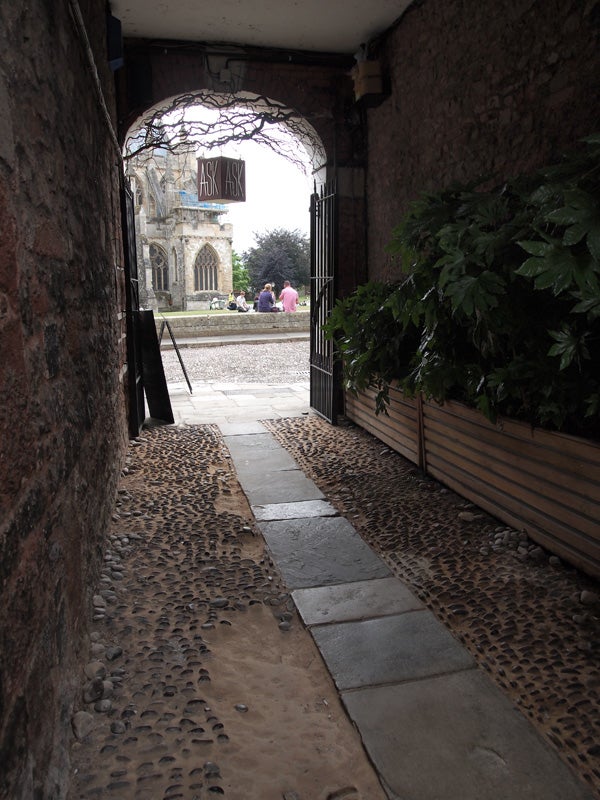 Dynamic range is much better than any small-sensor compact, with good highlight and shadow detail. 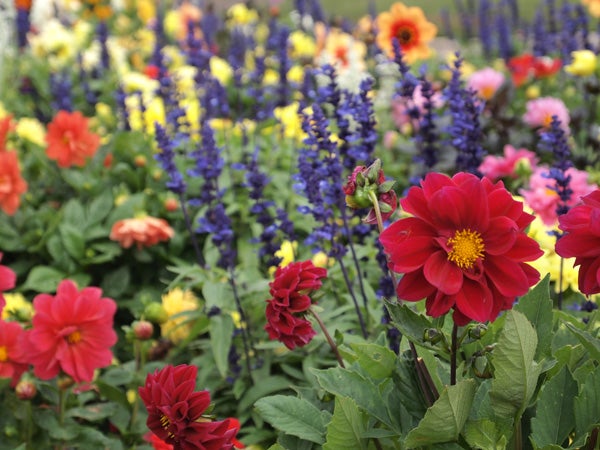 Colour reproduction is good despite the overcast conditions.