A little over seven months ago I reviewed the Panasonic Lumix DMC-G1, an SLR-like camera using a new lens mount and body design that eliminated the bulky reflex mirror and optical viewfinder that had been a feature of all SLR cameras – film and digital – since 1949. The result was a camera not much bigger than an average super-zoom, but with an SLR-sized Four Thirds sensor and a range of tiny, lightweight interchangeable lenses.


The Micro Four Thirds lens mount and the Four Thirds sensor format were co-developed with Olympus, with the latter being used in Olympus’s E-system digital SLRs, and now Olympus has also launched a camera employing the new format, the Pen E-P1. 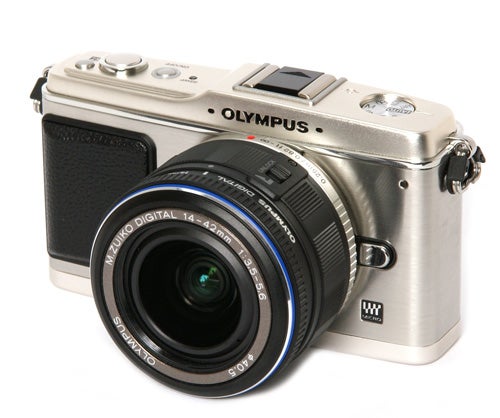 The camera’s unusual name and retro styling are a reference to the original Olympus Pen, a series of half-frame 35mm cameras first launched in 1959 and continued in one form or another until the early 1980s. The model on which the Pen E-P1 is styled is the Pen F, an innovative half-frame SLR that used a rotary shutter and porro prism viewfinder, launched in 1963 and manufactured until 1972. The Pen series were nice cameras and sold well for a half-frame, but they are hardly the sought-after classics that Olympus seems to want us to think. You can pick them up on eBay for less than £20. 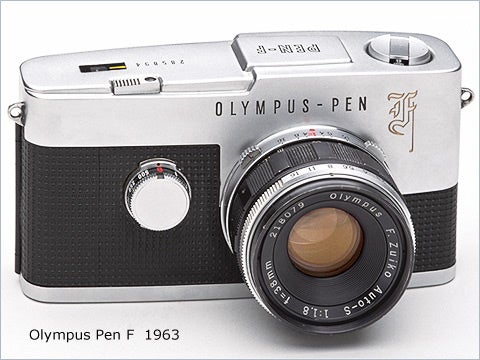 Classic or not, there can be little dispute that the E-P1 has an attractive design, indeed with the 17mm “pancake” prime lens that is available it could easily be mistaken for a 1970s-era 35mm compact camera. The body is all aluminium and beautifully finished in either white and tan or the silver and black shown here, which has a nice brushed metal surface. The finger grip on the front panel is hard plastic with a retro leatherette texture. 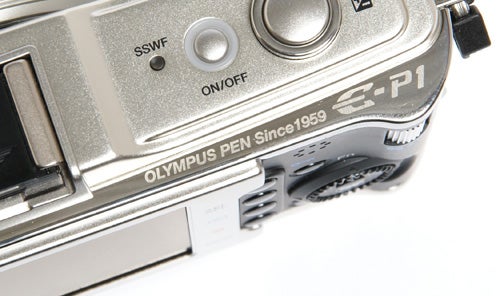 The E-P1’s overall build quality is fantastic, and it has the solid feel of a quality camera, but then it would need to have. The Olympus E-P1 is currently on sale for a rather breathtaking £598 body only, or £699 including the 14-42mm f/3.5-5.6 lens shown here. Choose the lightweight 17mm f/2.8 lens instead and it will cost you £749, while a twin lens kit will set you back a whopping £849. By comparison you can get the excellent Olympus E-620 DSLR, featuring the same sensor as the E-P1, for £498 body-only, or £674 in a twin-lens kit. Style clearly comes at a price. 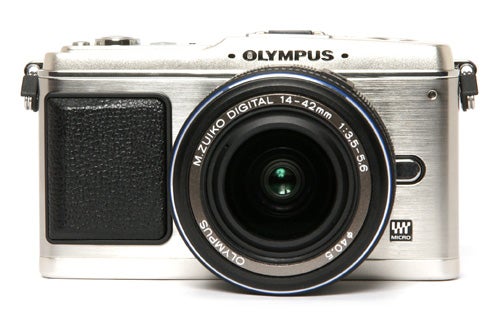 The E-P1’s specification is certainly more like that of an SLR than a compact. It has a 12.3-megapixel 4/3rds Live MOS sensor with a claimed four stops of image stabilisation and Supersonic Wave Filter self-cleaning mechanism. It has a high speed TruePic V image processor (the E-620 has TruePic III+) and it has an extensive range of manual exposure options for the more experienced photographer. The shutter speeds range from 1/4000th of a second to 30mins in B mode, the sensitivity range is 100 – 6400 ISO in 1/3EV increments, and aperture priority, shutter priority and full manual exposure are available.


The camera’s controls are similar to those of an E-system DSLR, although styled rather differently. The main shooting mode dial is partly concealed under the left side of the top plate, while exposure control is adjusted via either the rotary D-pad or the odd roller control on the upper right of the back plate, both of which are quite fiddly to operate smoothly.


Control over the main shooting functions such as image quality, ISO setting, metering and AF mode, white balance and drive/self-timer mode is provided by an on-screen quick menu similar to the ones seen on many of Olympus’s compact cameras. 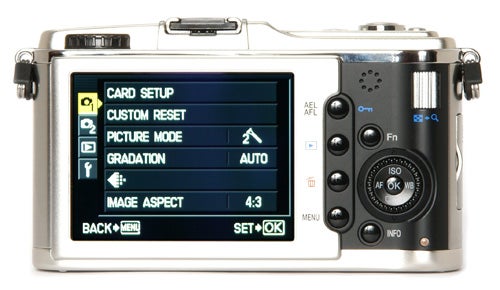 Thankfully Olympus has finally seen the error of its ways and changed its main menu design, and it is a massive improvement. Menu options include fully customisable colour profiles, adjustable tone (gradation) and image aspect ratio. The E-P1 can shoot in 4:3, 16:9, 3:2 and 6:6 formats.


There is a hidden area of the menu which, once activated, gives access to an extensive list of custom functions which make it possible to set the camera up just the way you like it, including customising noise reduction, colour space and some default ISO settings.

In other ways the E-P1 resembles a compact camera, with shooting settings including Intelligent Auto, a range of 19 Scene Mode programs, and an Art Filter setting, with some fun special effects like a high-saturation Pop Art mode, Soft Focus and a Grainy Film monochrome mode. 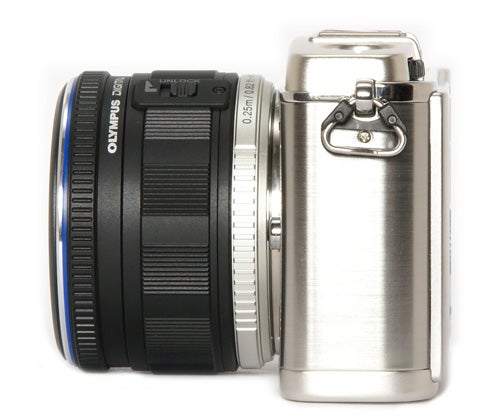 The E-P1 also resembles a compact camera in another way; it has no viewfinder, relying instead on its 3.0-inch 230k LCD monitor. Having used the E-P1 over the past week or so, I am increasingly of the opinion that this is a mistake. While shooting at arms length is perfectly comfortable with a normal lightweight, powered-zoom digital compact, it’s an awkward and uncomfortable way to shoot with a large and fairly heavy manual zoom camera. An optional add-on optical viewfinder is available, which clips onto the flash hot shoe, but it’s only calibrated for the 17mm non-zoom lens, and adds another £100 onto the price. 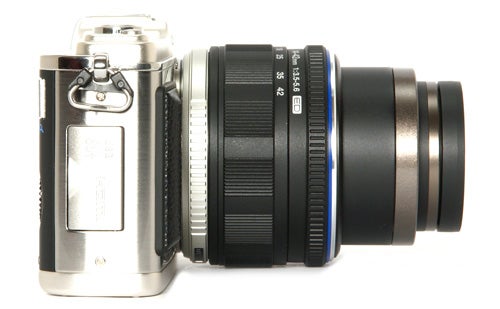 Another surprising omission is a built-in flash. Again a matching accessory flash gun is available, but it costs another £160. It’s doubly annoying because without a flash or any sort of AF assist lamp the E-P1 has major problems in low light levels. It has a contrast detection autofocus system, which is simply not as fast or effective as the phase-detection AF system used in conventional DSLRs, and in light that is still bright enough to read by the camera frequently hunts around for a second or two and then fails to focus, and if it can’t focus then it won’t let you take a picture.


When it will focus however the excellent sensor-shift image stabilisation system virtually eliminates camera shake at shutter speeds as low as 1/10th of a second even at the longest setting of the zoom lens, a stability gain of around three stops. 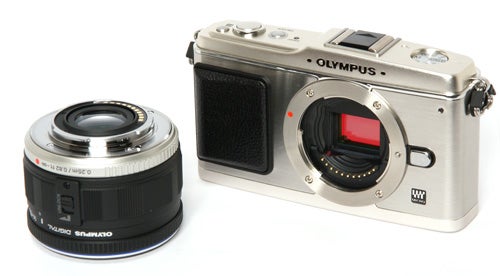 Another very good feature is the HD video mode. It can shoot at 1280 x 720 resolution at 30fps, with stereo audio recorded by two microphones positioned either side of the name badge above the lens. The video quality is excellent, as is the audio, but the microphones are non-directional, picking up sound from off-screen just as loudly as from in front of the camera. However the manual zoom can be used while shooting, as can aperture priority for depth-of-field control, and a range of art filter effects. The camera has an HDMI output for connection to a digital TV.


One interesting side-point is that the E-P1 is the first Olympus camera (as far as I am aware) to finally dispense with the expensive and unpopular xD picture cards in favour of SD/SDHC.

The E-P1’s performance is good for a compact, but looks a little slow compared to most DSLRs. It starts up in well under two seconds, although if you’re using the 14-42mm lens you have to remember to manually extend it from its folded position first. In single shot mode the slow autofocus means that is has a shot-to-shot time of approximately 2.3 seconds. In continuous mode it shows how fast it could go, by maintaining three frames a second in both Raw and JPEG modes.


I haven’t had a chance to try the 17mm f/2.8 lens yet, but the Zuiko 14-42mm f/3.5-5.6 lens is excellent, producing pin-sharp detail from corner to corner at all focal lengths with barely any optical distortion and no trace of chromatic aberration thanks to the use of ED glass. There are two optional adaptors available that allow the E-P1 to use both existing E-system lenses and even OM-system 35mm lenses. As far as I know it should also accept Panasonic G-system lenses. 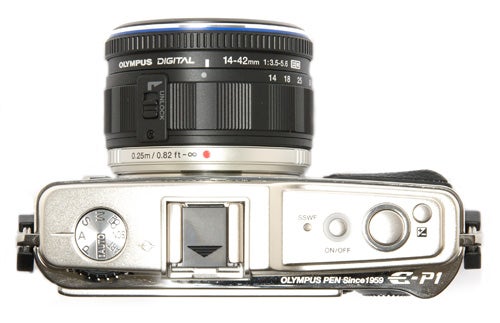 In terms of overall image quality the E-P1 is a bit of a mixed bag. Exposure metering is up to Olympus’s traditional high standard, and in good light the results are excellent. In high-contrast conditions it has more dynamic range than any compact I can think of, with detail even in dark shadows, although even in Raw mode it blows out some highlights that a good APS-C DSLR would catch. Colour rendition is also very good, with plenty of detail even in bright saturated areas.


I was expecting the E-P1 to show similar high-ISO noise results as the Panasonic G1, but unfortunately this is not the case. While the G1 doesn’t start showing any noise until 800 ISO, the E-P1 has visible colour mottling and noise in the darker tones at its default auto setting of 200 ISO, getting progressively worse, although overall colour reproduction remains reasonably good right up to 3200 ISO. JPEG images also show some over-sharpening, but at least the compression rate is nice and low, with fine JPEG mode producing files of around 5.5MB and Raw files of around 12MB. 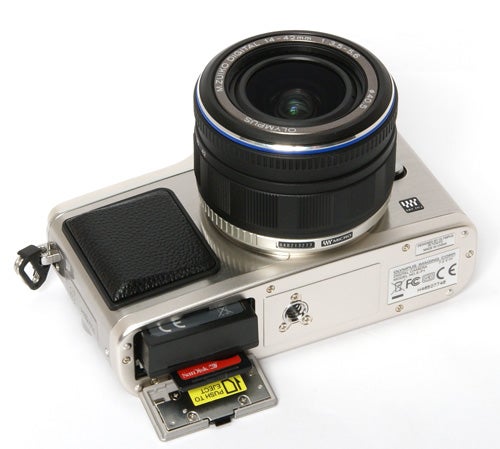 The Olympus E-P1 is an interesting and innovative camera, and as a first model in what will probably be a series it has some very nice features. Build quality and finish are of an exceptionally high standard, and image quality and performance are safely superior to the vast majority of compact cameras. However the enormous cost compared to a good DSLR, and the lack of either a viewfinder or built-in flash will put many people off. 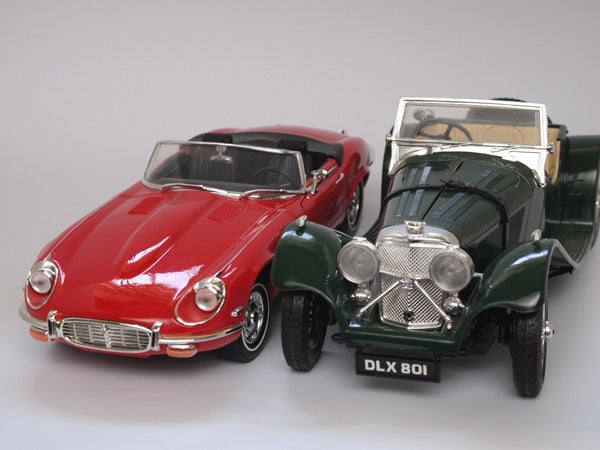 This is the full frame at 100 ISO. ISO settings at 1/3EV intervals are available on the E-P1, but the the sake of brevity I’ve only listed the full-EV settings. 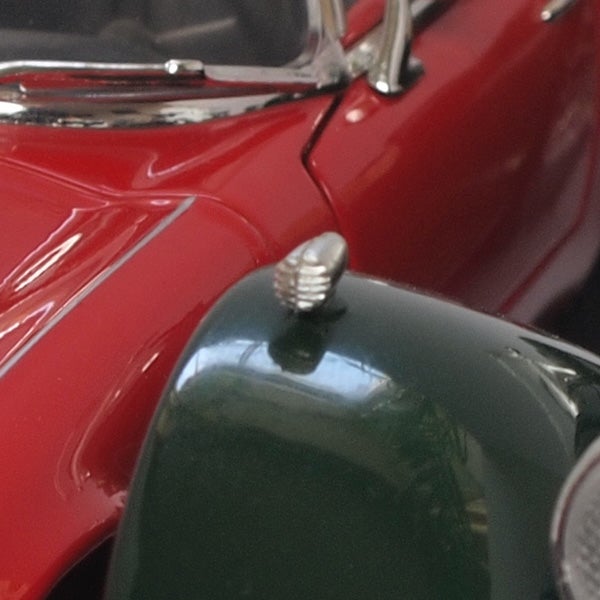 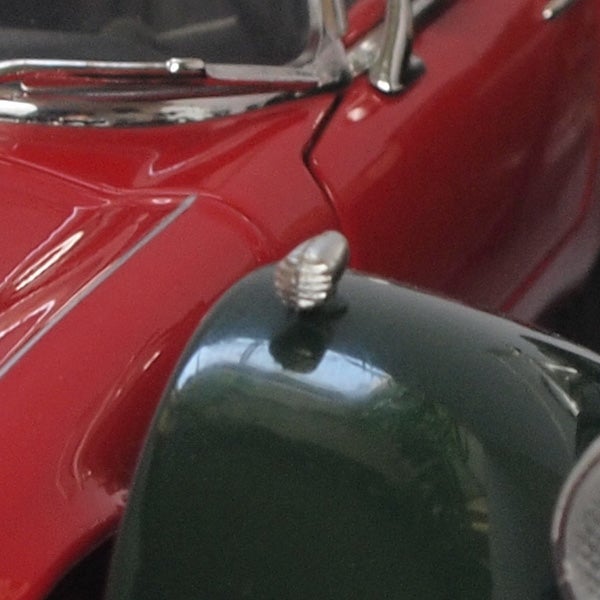 Already at 200 ISO there is a faint dusting of image noise, and a trace of colour mottling in the green area. 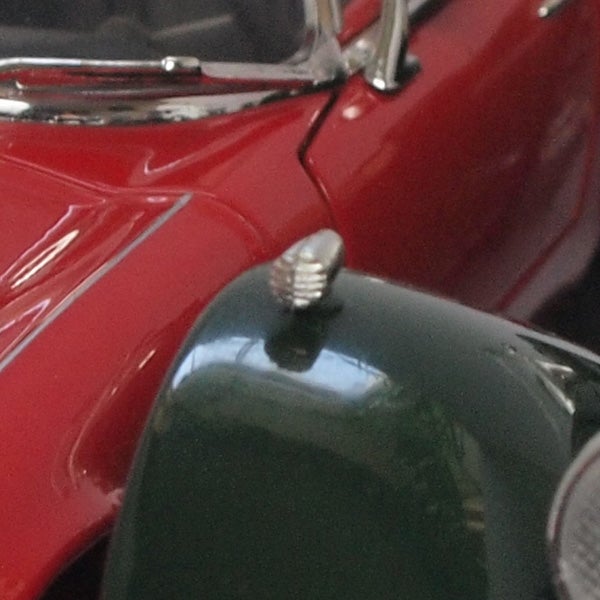 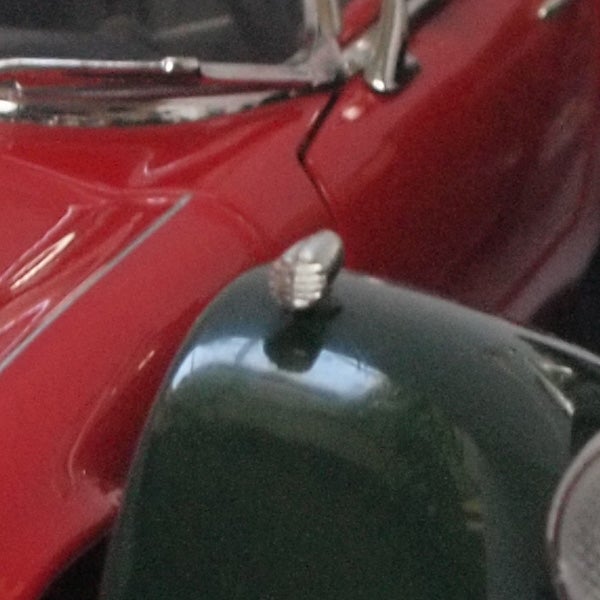 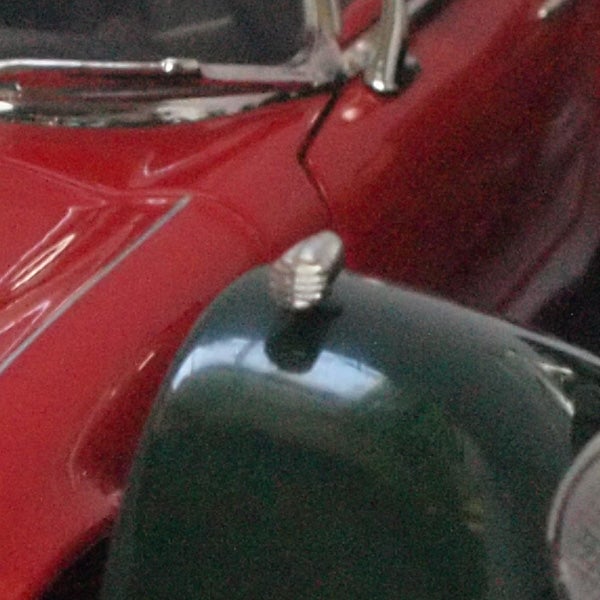 Noise is becoming a real problem at 1600 ISO. 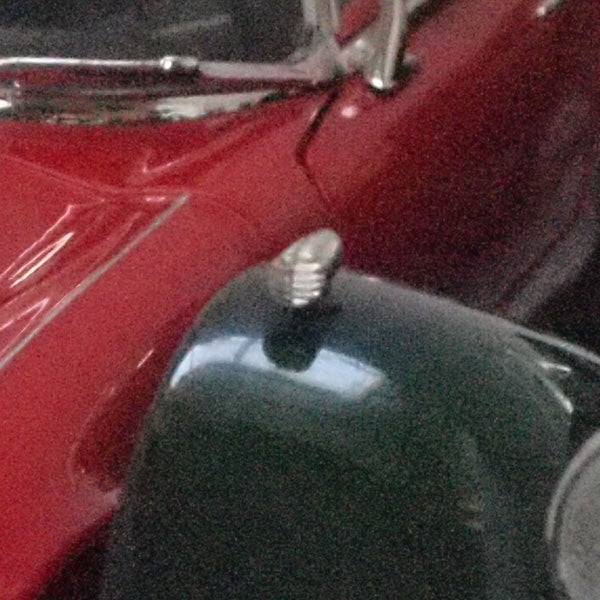 Colour saturation is starting to fade out at 3200 ISO. 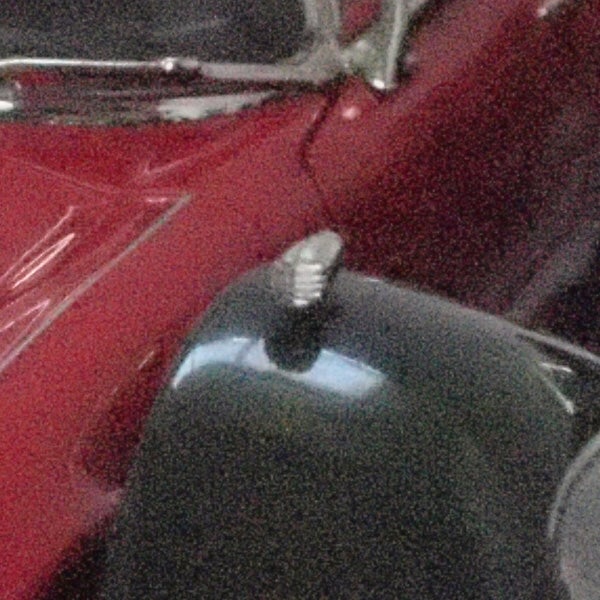 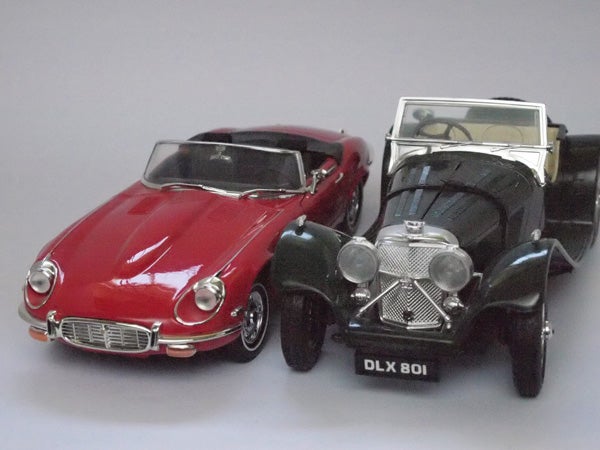 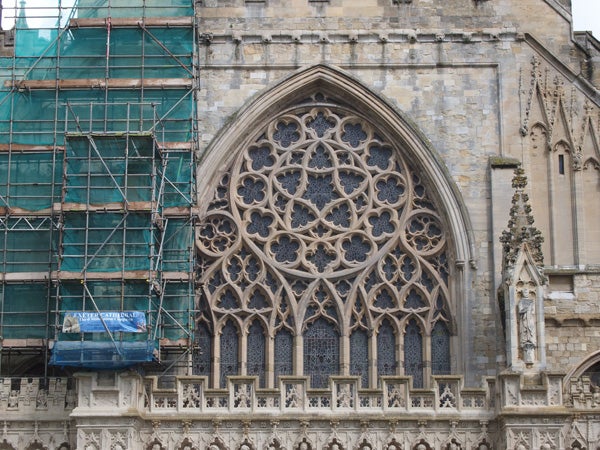 Here’s the usual detail test shot of the West Window of Exeter Cathedral, for you to compare with other cameras. Please bear in mind that the maximum magnification of the 14-42mm lens isn’t quite as high as most 3x zoom compacts. See below for a full res crop, or click to see the whole picture. 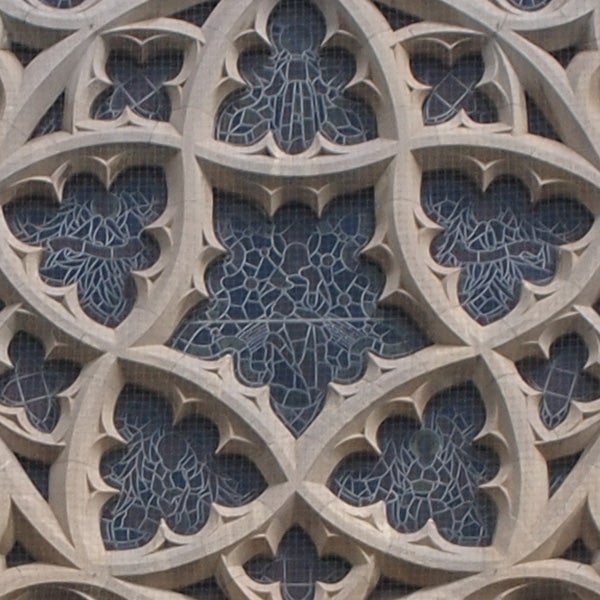 The level of detail is very good, but not really much better than a good compact. 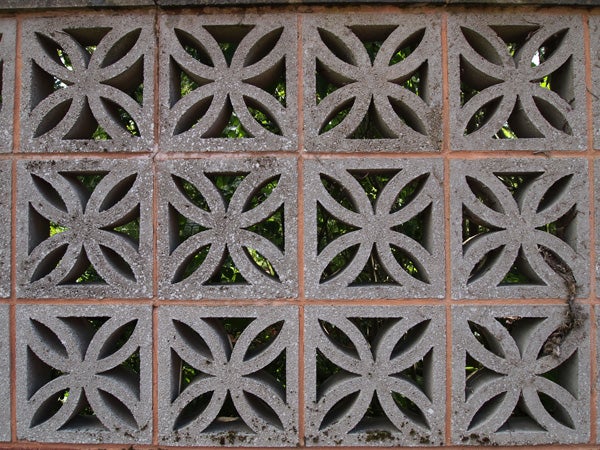 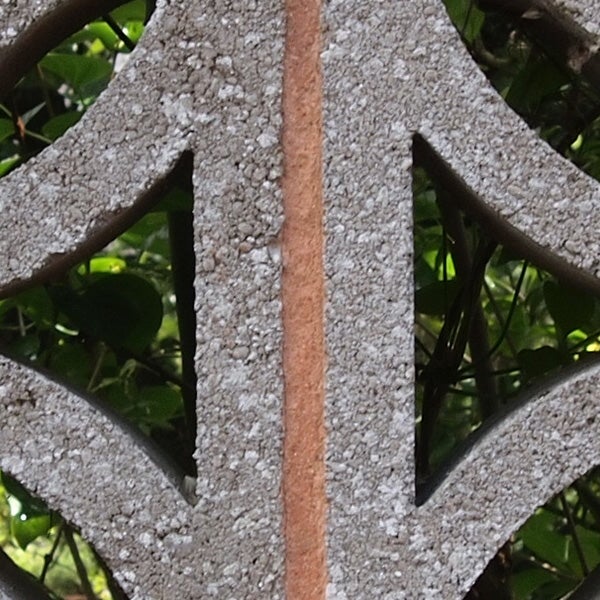 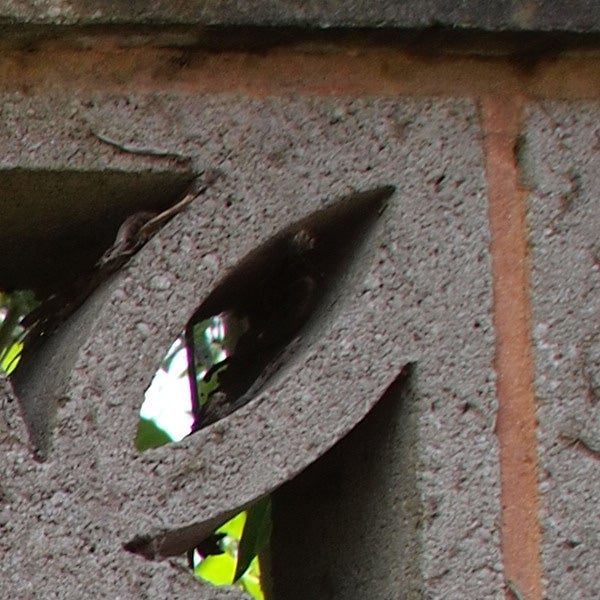 The corners of the frame are also very sharp. 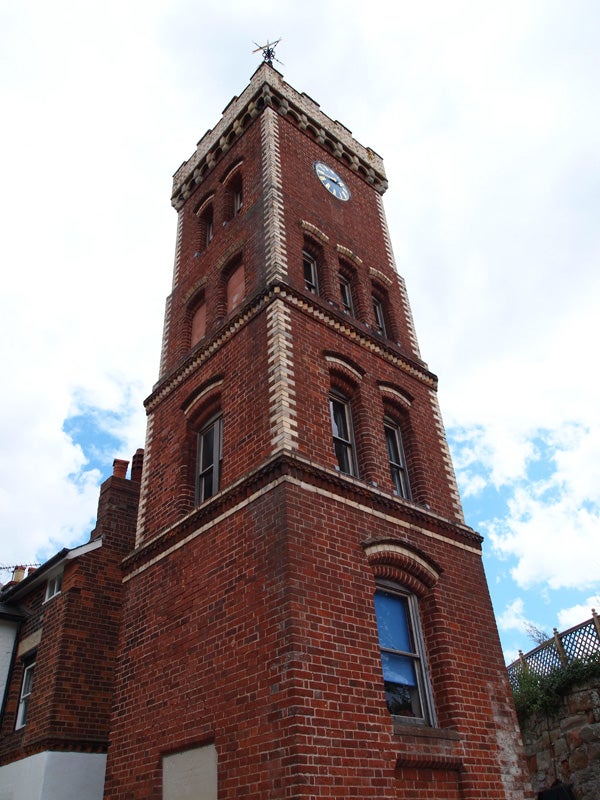 This is taken at the 14mm end of the zoom, equivalent to 28mm. 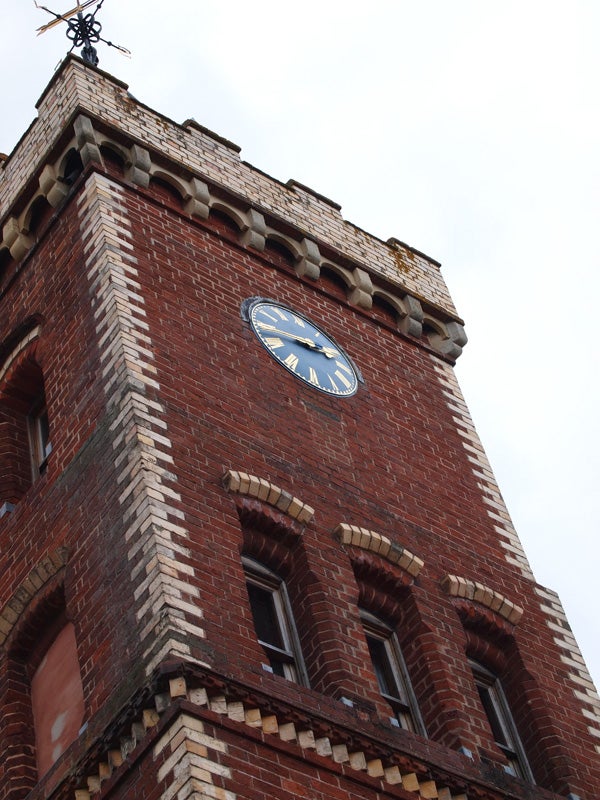 The telephoto end of the kit lens is 42mm, equivalent to 84mm. 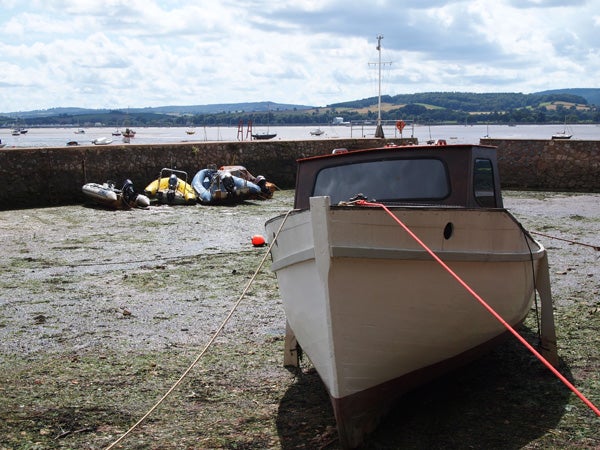 In bright sunlight there is detail in the shadows but some of the highlights have been burned out. 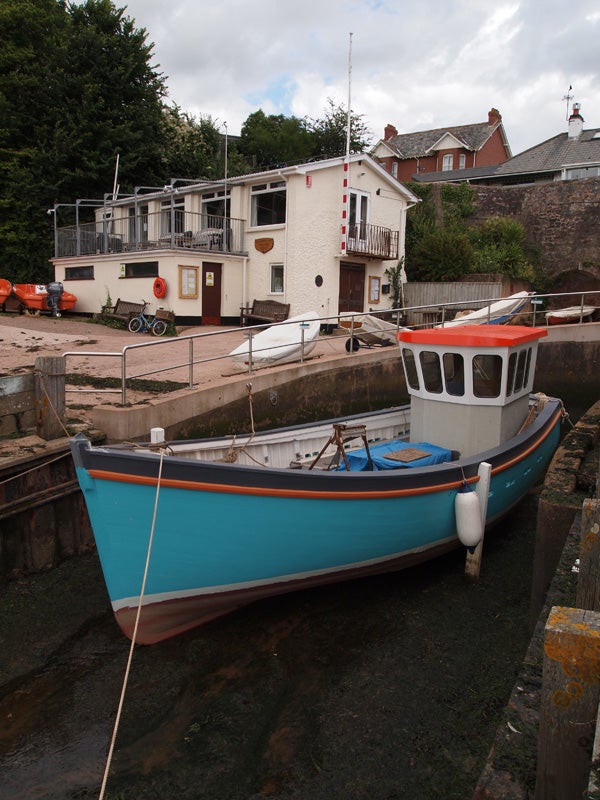 Colour rendition is good despite the crappy weather. 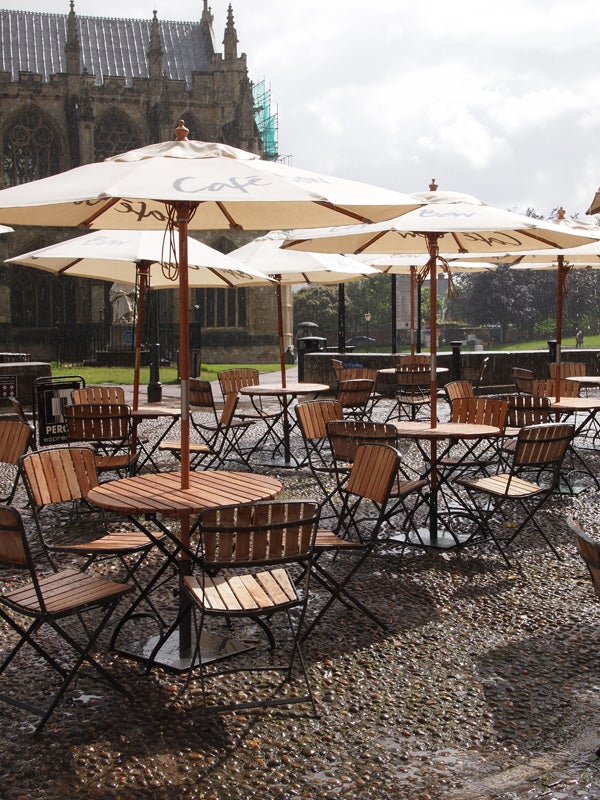 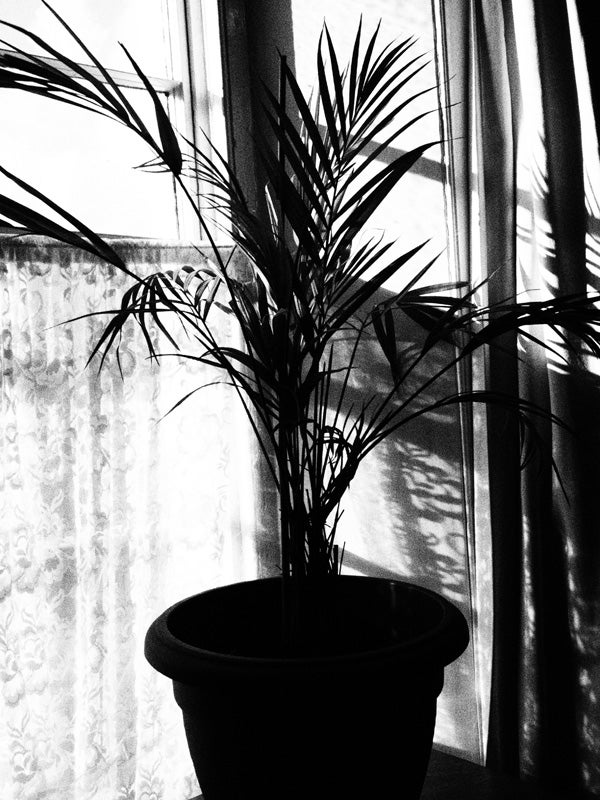