The high-zoom compact camera is a relatively new idea, but one which has seen a rise in popularity over the past couple of years. It was Ricoh that first introduced the concept, but most of the other manufacturers now include such cameras in their product line-up, most notably Panasonic with its extremely popular TZ series, which are sold as travel cameras. Olympus is trying a similar sales pitch with today’s camera, the new Mju 9000. 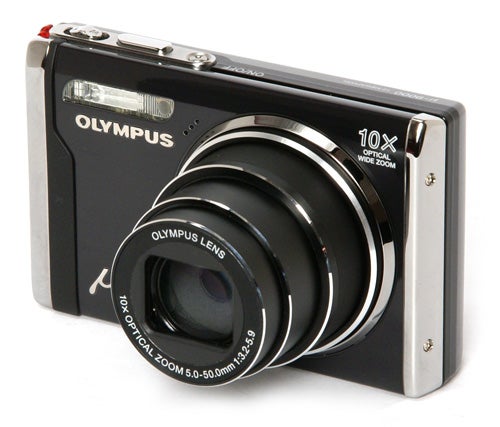 Facing a lot of well-established competition the Mju 9000 needs an impressive specification to stand out from the crowd. It features a 12-megapixel sensor, a 10x zoom lens equivalent to 28-280mm, a 2.7-inch wide-view monitor and robust but compact body. It’s currently selling for around £240, which is quite expensive compared to its closest competitors, the Ricoh R10 (£170) and the Canon PowerShot SX110 IS (£185). It’s considerably cheaper than the Panasonic TZ7 (£305), but remember that camera has a 12x zoom and HD video capability, something which the Olympus lacks. 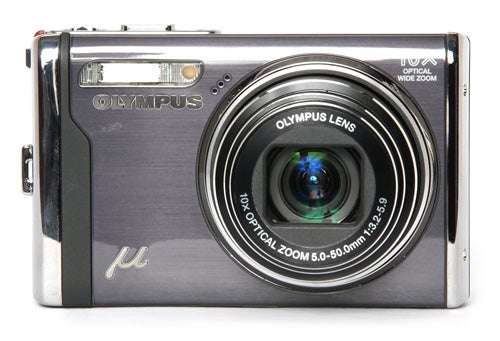 The Mju 9000 is not a particularly pretty camera, but it is well designed and solidly put together. Physically it’s about the same size as the Ricoh R10, and quite a bit smaller and lighter than either the Canon SX110 or Panasonic TZ7. It measures 96 x 60 x 31 mm, and weighs approximately 205g including battery and memory card. The body is made mostly of plastic but feels robust and well made, and the finish, while a bit over-fussy, is at least of a high standard. The shape of the body is easy to hold, with a detail on the front that serves as a finger grip, while the back has a small textured thumbgrip area.

The controls are pretty straightforward. It has a small mode dial bearing six settings, including the normal program auto, an easier Intelligent Auto (abbreviated iAuto, which might draw some curious glances from Panasonic’s legal department), a scene mode with 14 scene programs including pre-capture movie, and a Beauty mode, which softens skin tones in portrait shots. The dial itself is just stiff enough to prevent it being turned accidentally. 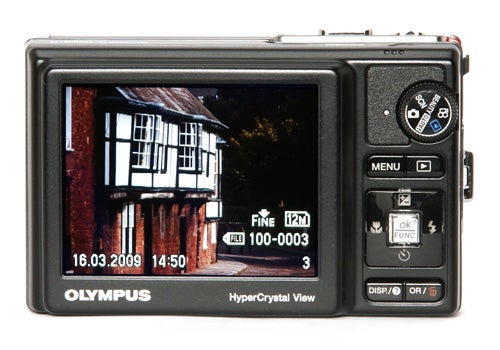 The large square D-pad and the other rear panel buttons light up when pressed, which makes it a lot easier to change settings in the dark, and the simple on-screen function menu provides quick access to white balance, ISO, drive mode, metering mode and image size/quality. These settings are duplicated in the main menu along with a couple of others, but in fact the Mju 9000 is surprisingly limited in terms of options. It has no colour options or picture adjustments, and even common things like a two-second self timer are absent.


The zoom control is a small slider-type switch on the top panel, and is rather small and fiddly. The zoom action is stepped, with 12 positions between wide and telephoto, and although it can get from minimum to maximum very quickly it is rather jerky for fine adjustments. The only other control on the back is a button labelled OR, which offers a choice between panorama assist, shadow adjustment or a strange four-panel multi view option that previews the effects of zoom, white balance, exposure compensation or spot metering. 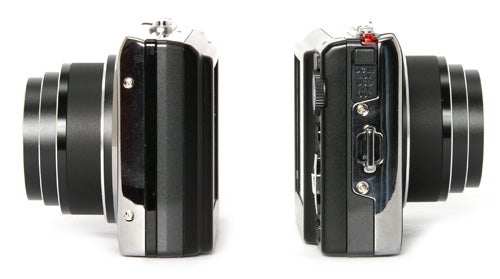 The camera’s LCD monitor is particularly good. It is of a fairly standard size and resolution (2.7-inch, 230k), but it is very clear and bright with an exceptionally good viewing angle, both vertically and horizontally. It also has a good anti-glare finish and is slightly recessed, so it avoids some scratches and finger marks.


As I mentioned previously the Mju 9000 lacks the increasingly popular HD movie capability, and is instead limited to 640 x 480 VGA resolution and mono audio. The optical zoom cannot be used while shooting, and if you have the cheaper but slower M-type xD cards then movie clips are limited to just 10 seconds. The camera does come with an adapter allowing the use of the popular micro SD cards used in many mobile phones. Is this a tacit admission by Olympus that the days of the unpopular and expensive xD-Picture card are numbered?

In terms of overall performance the Mju 9000 is mostly very good. It takes just under three seconds to start up, which is a little slow but not enough to be a problem, and takes a little over two seconds to shut down again. In single-shot mode it can take a picture approximately once every two seconds, which is reasonably brisk for a 12MP camera, while in standard continuous mode it can maintain one frame a second with the faster H-type card, which is nice and quick. It is slightly slower when using the M-type cards, but only because the buffer fills up after seven shots, faster than it can write to the card. 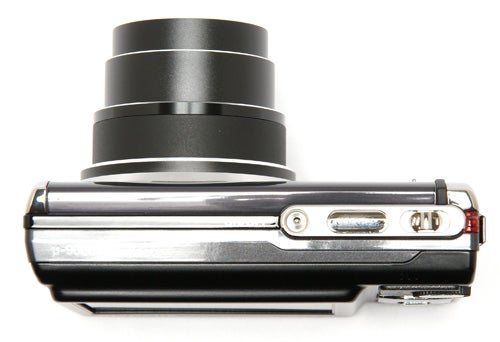 The autofocus system is quick and reliable in good light at all zoom settings. In lower light it does slow down quite noticeably, especially when zoomed in, but even in very low light it will usually focus on the second try. Unfortunately the Mju 9000 has no AF assist lamp, so once light levels drop too far it cannot focus at all.


Of course you want your holiday photos to look nice, so it’s nice to know that the image quality is mostly very good. The lens is excellent, with good centre and corner sharpness and producing very little distortion or chromatic aberration at any focal length. The level of fine detail is very good, as one should expect from a 12MP camera. Colour reproduction is superb, with plenty of detail even on bright saturated colours, and there is no bleed-over around colour edges. Dynamic range is a bit limited, and the exposure meter does tend to burn out highlights, but the Shadow Adjustment feature does help to preserve some shadow detail. Even noise is reasonably well handled, with good picture quality at 200 ISO, and slightly noisy but still usable images at 400 ISO. Colour saturation looks a bit faded at 800 ISO, and 1600 ISO is distinctly ropey, but this is to be expected from a small over-crowded sensor. 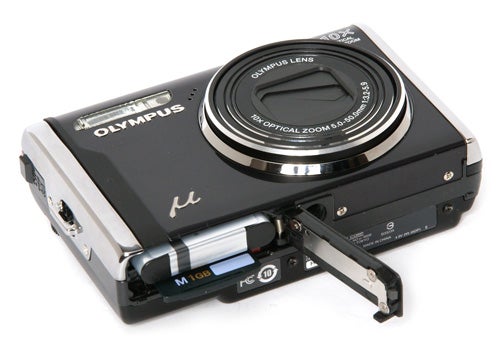 The Olympus Mju 9000 is a sensibly designed and well made camera with a very useful zoom range. It is easy to use, performs well and produces good results in most situations. However the lack of some important features such as an AF assist lamp or any colour adjustments limit its appeal somewhat, especially considering the relatively high price. 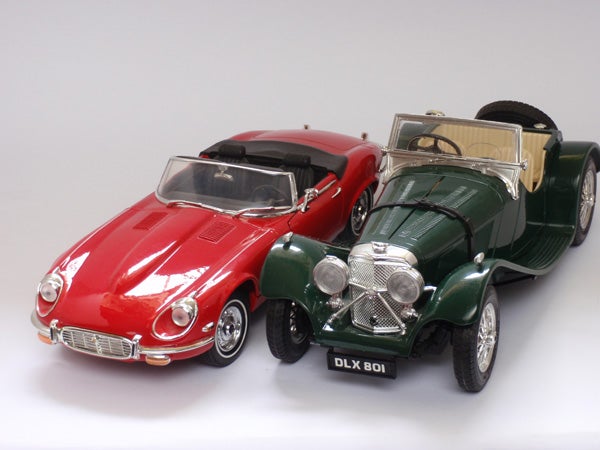 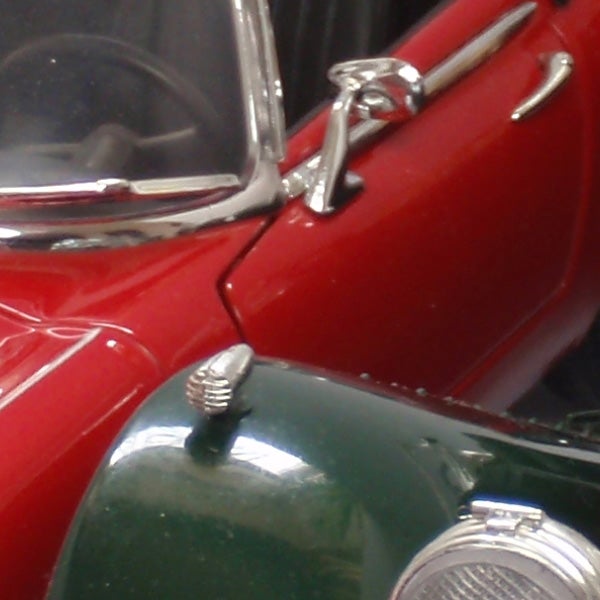 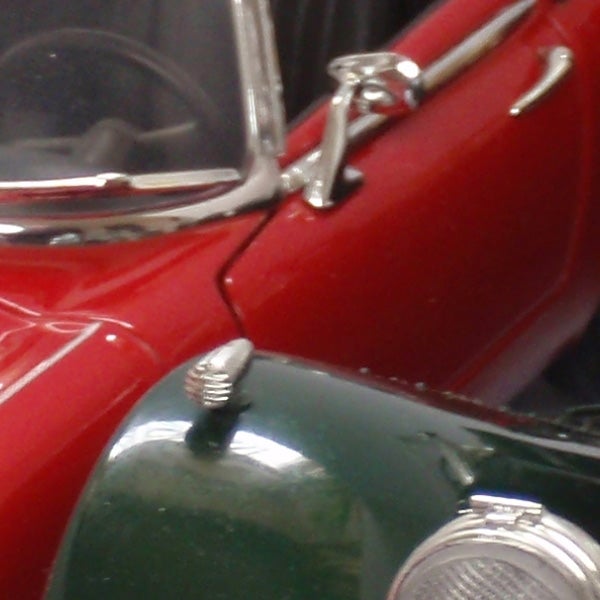 Still no major problems at 100 ISO 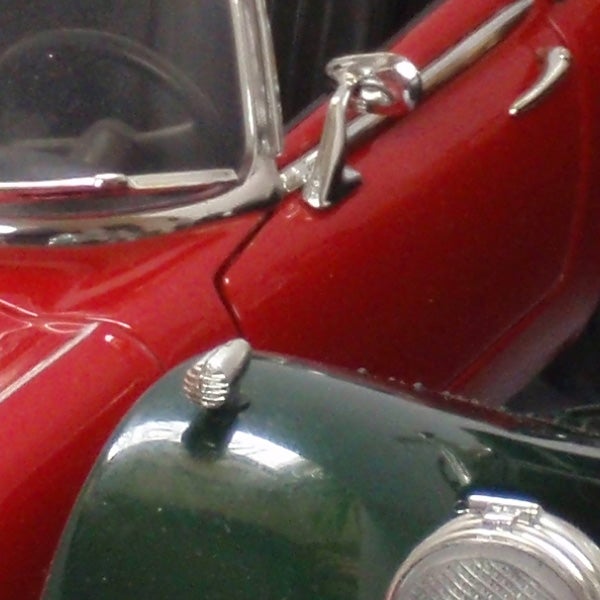 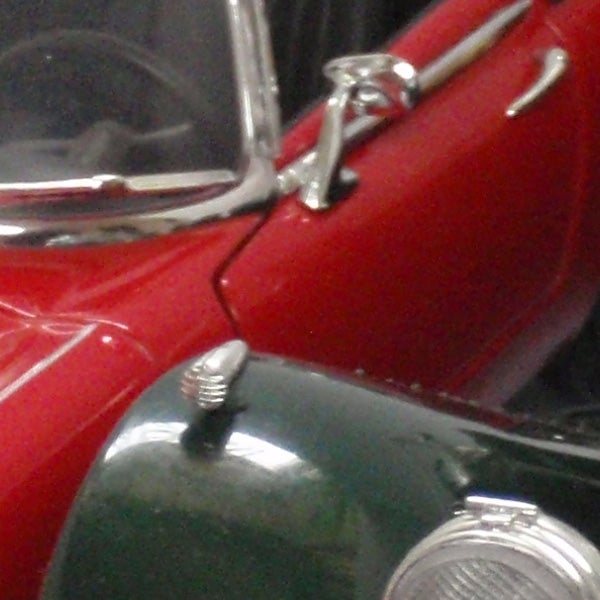 Noise is starting to creep in at 400 ISO, with colour distortions ans blotchy shade. 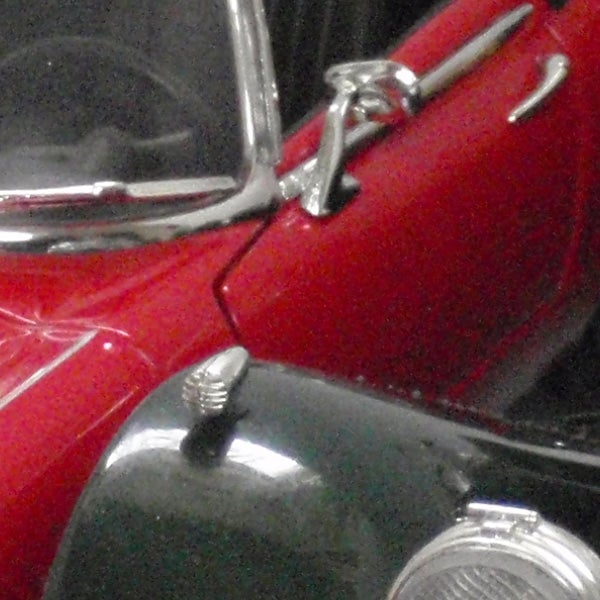 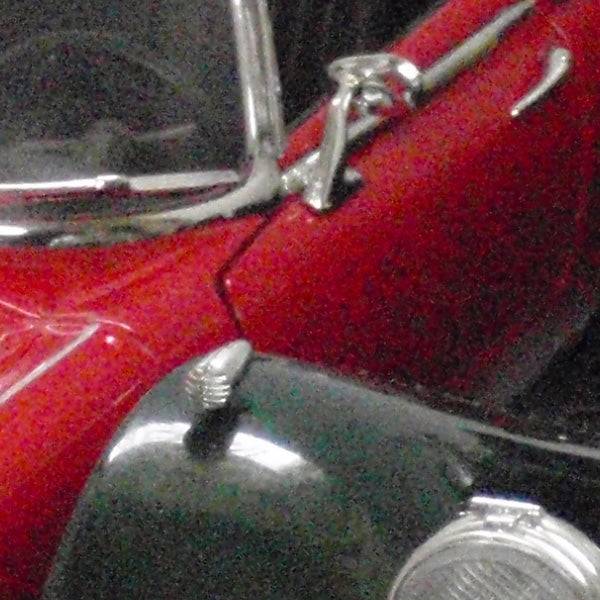 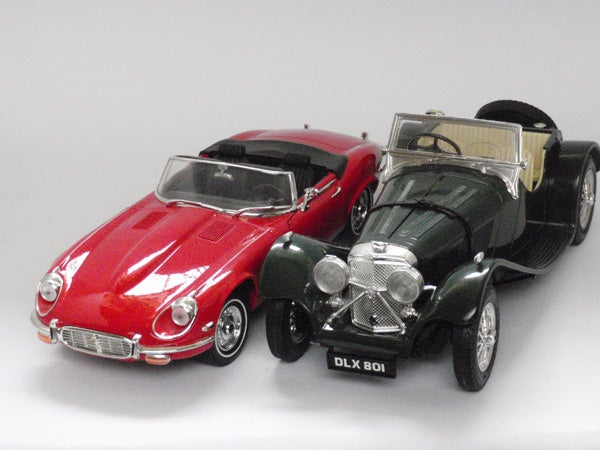 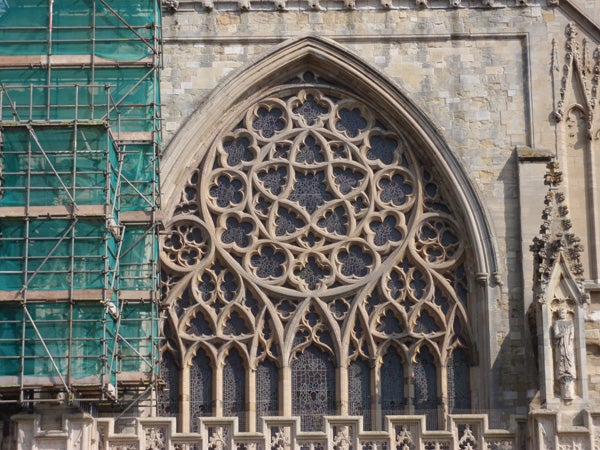 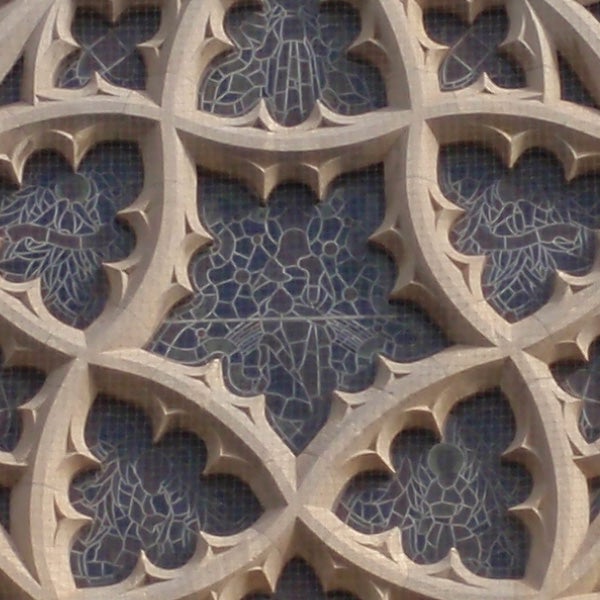 The level of fine detail is very good, but the overal image looks a bit soft. 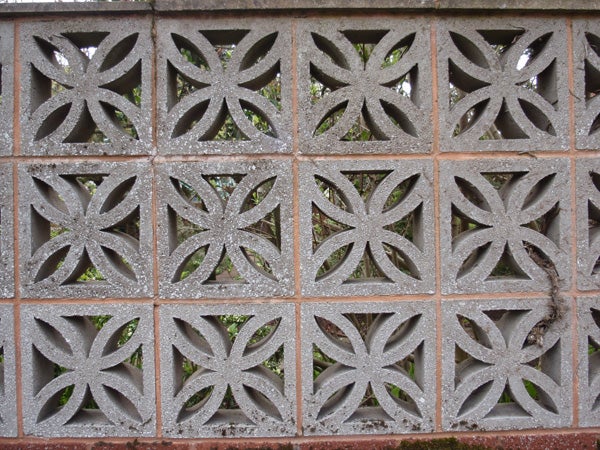 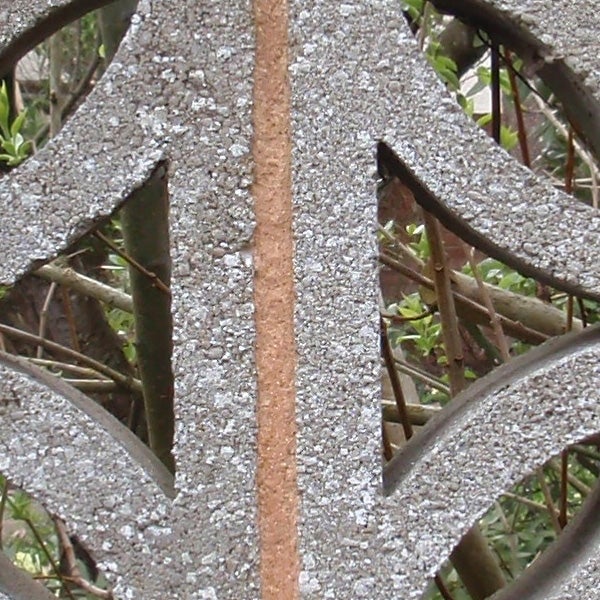 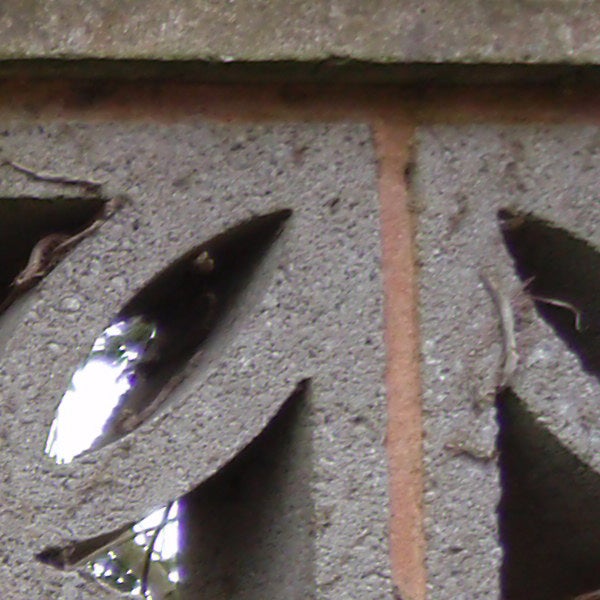 Corner sharpness is pretty good too, with little chromatic aberration. 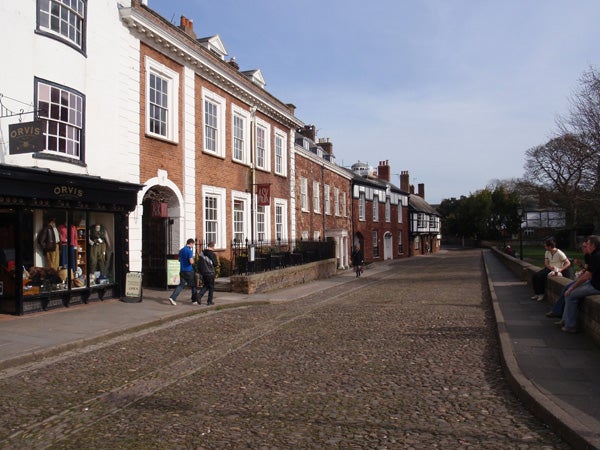 The wide angle end is equivalent to 28mm, a useful wide angle setting. 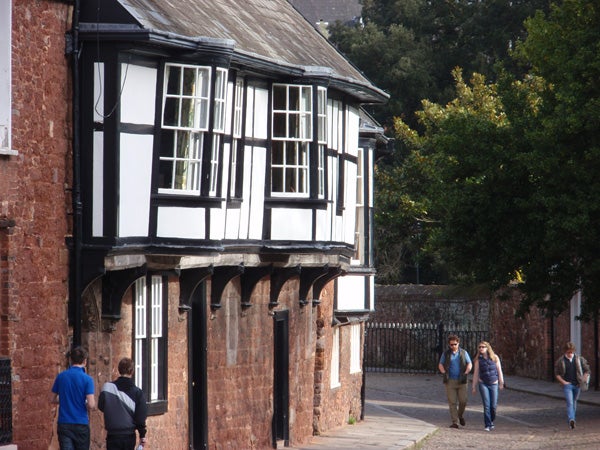 The telephoto end is equivalent to 280mm, a traditional medium telephoto. 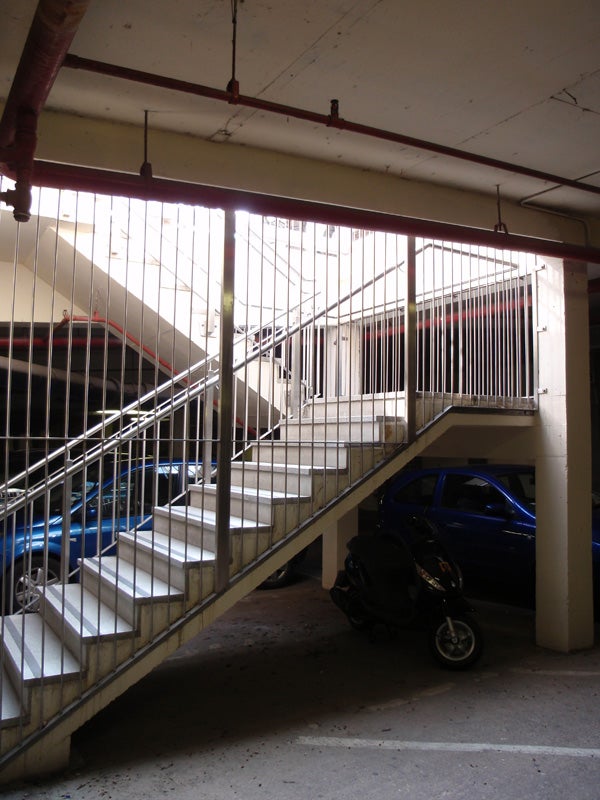 The tiny overcrowded sensor has very limited dynamic range, burning out highlights in this high-contrast shot. 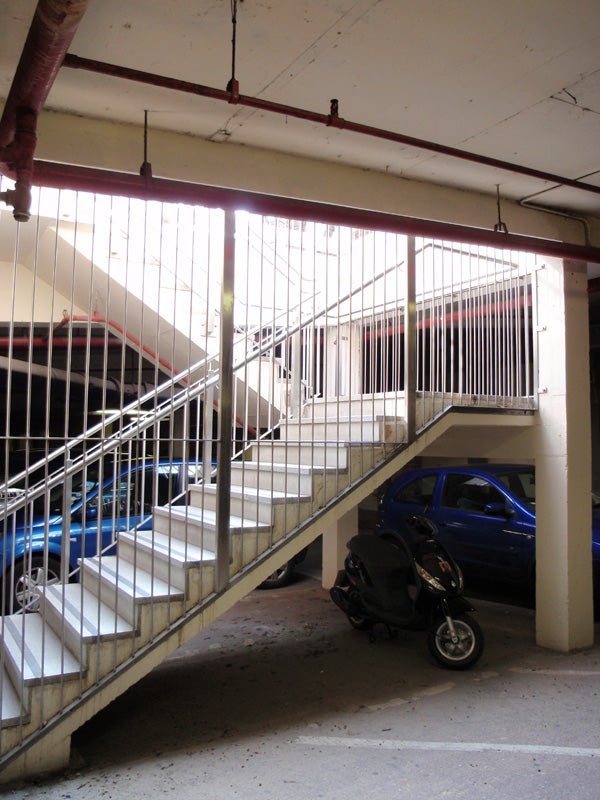 The shadow adjustment feature recovers some shadow detail, but doesn’t help with the highlights. 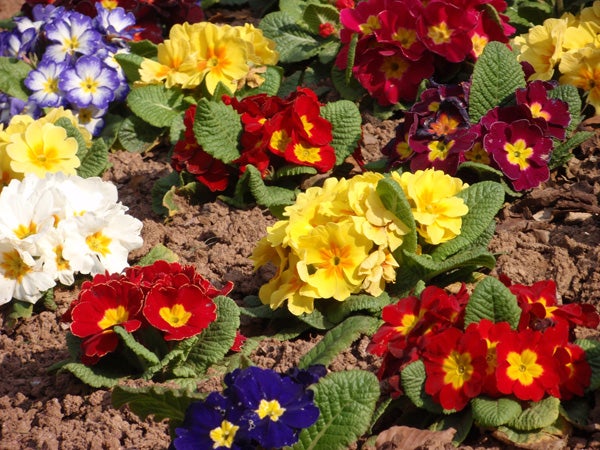