As the inevitable and largely pointless megapixel race continues, the latest to join the front runners is Olympus with the launch of the mju 1000, a stylish and weatherproof 3x zoom compact featuring a 10-megapixel sensor.


The mju series, which currently consists of eleven models, has proven to be very popular, particularly with more adventurous users for whom the ability to withstand rain, dust, snow, spray and in some cases even full immersion in water are major selling points. 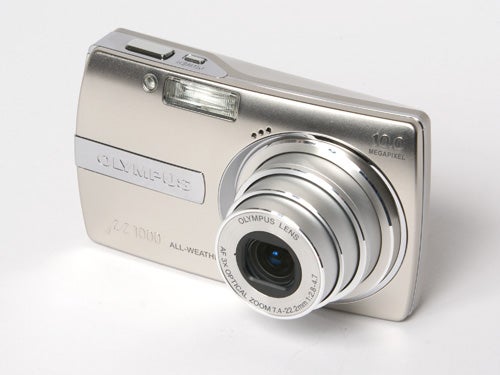 The mju 1000, while not fully immersion waterproof, offers protection “equivalent to the IEC standard publication 529 IPX4”, which in plain English means it’s resistant to water splashed from any direction, so it’s ok to use it in the rain or at a particularly sweaty rave (ugh!), but it’s probably not a good idea to use it in the bath.


It has a very strong stainless steel body, so while it’s not specifically claimed to be shockproof (as a couple of other cameras in the mju range are) it can certainly survive a few more knocks than most compact cameras. The lens retracts fully into the camera body, and the overall shape is very smooth and sleek, like a thin wedge with rounded-off corners, so when switched off it presents a very slim and pocket-friendly profile. It measures 97 x 56.2 x 22.7mm and weighs only 140g (minus the battery) so you’ll hardly know you’re carrying it. 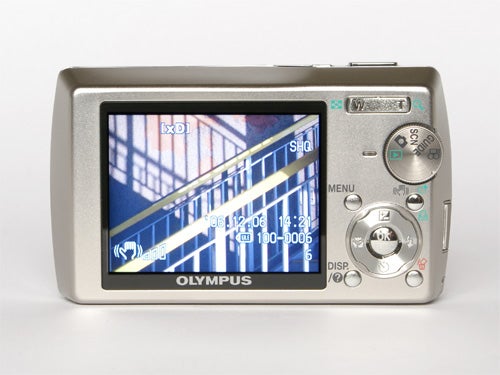 It’s certainly a very pretty camera. The brushed steel and chrome finish will stay looking good for a long time, and it does feel nice in the hand. The control layout is simple and uncluttered. The controls are sensibly positioned leaving room to grip and operate the camera securely in one hand, useful if you’re using the other to hang on to a ski lift. The controls are quite small however, so operating them while wearing gloves could be a problem. I found that the slightly protruding position of the mode dial, while providing a handy rear thumb grip, did make it quite easy to accidentally jog the camera into a different mode.


The LCD monitor is 2.5in with a resolution of 230,000 pixels, which seems to be fast becoming the standard for top-end compacts. It’s certainly nice and sharp, although its highly reflective finish makes it difficult to see in bright sunlight. 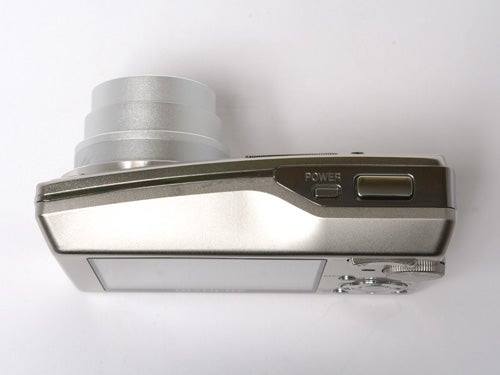 General performance is also quite impressive, although it does have some limitations. It starts up in under a second, which is very quick by any standard. It has a very fast continuous shooting mode that can manage nearly four frames a second for twelve frames, again comfortably above average. The movie mode is also good, offering VGA resolution at 30fps.


The auto focus system isn’t the fastest I’ve seen but it’s not appallingly slow, taking around half a second to lock on in average lighting conditions. It’s not too good in low light though, failing to focus even in a room lit with a 60 watt bulb. Since it lacks an AF illuminator this does limit its usefulness in the social settings in which it is most likely to be used. 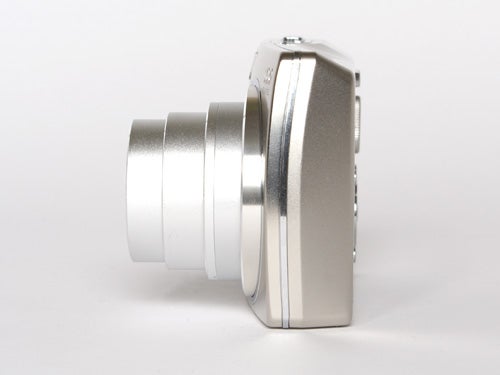 This is rather puzzling, because the mju 1000 has a number of other features that would otherwise make it an excellent low-light camera, including the Bright Capture system which automatically increases the ISO setting to 400 and brightens the LCD monitor to help with shooting in the dark. The flash is also excellent, with great frame coverage and a range of 5.2 metres at wide angle. It also has the highest available ISO setting I’ve ever seen on a digital camera, a maximum of 6400 – although only at three megapixel (2,048 x 1,536) resolution. But what’s the point of all that if the camera can’t focus?


Exposure metering is good though, and the cameras was able to cope with a wide range of different lighting conditions, including shooting into the sun, without any problems.


The mju 1000 is a very simple camera with only a limited range of shooting options. It has a basic auto mode in which everything is done for you, and a program mode in which ISO and white balance can be manually adjusted. It also has a selection of twenty scene modes covering all likely eventualities and well as a few less likely ones. Does anyone actually need a special mode for shooting auction photos? 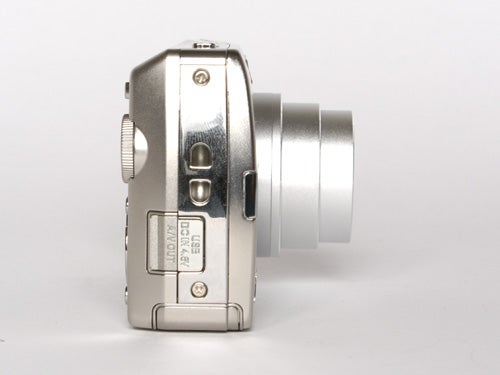 The camera has an electronic image stabilisation system which works fairly well, adding about 1-2 stops of extra hand-held stability at low shutter speeds. Unusually however this can be applied retroactively using the Perfect Fix option, so if you’ve taken a shot that’s showing a little motion blur the camera can attempt to correct it. It can also automatically adjust lighting balance and correct red-eye in shots after they’ve been taken, which is very useful. Corrected shots are saved as separate images rather than overwriting the originals.

Image quality is generally good, but with a few minor flaws. As I mentioned, exposure control is very good, and the camera coped with a number of high contrast subjects without difficulty, although it seemed to favour shadow detail at the expense of burned-out highlights. Colour rendition was very good, accurately reproducing even very bright colours without a problem.


As is usually the case with over-powered compacts, the actual level of detail in the shots is nowhere near what one might expect from a 10MP camera, as you’ll see if you compare the sample shots with those from the 10MP DSLRs that I’ve reviewed recently. Horizontal and diagonal details were especially blurred. 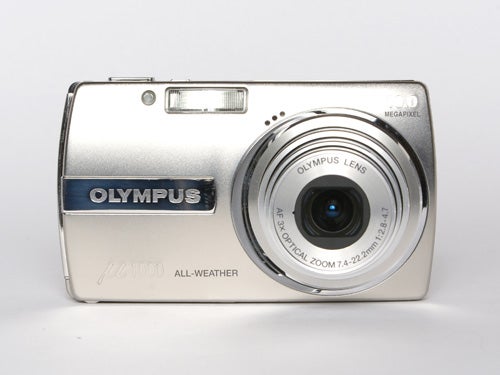 The camera’s small 7.4 mm – 22.2 mm (35 mm – 105 mm equivalent) lens produced very little wide-angle spherical distortion, but suffered from obvious blurring toward the edges of the frame. In fact in wide angle shots it was only really sharp in the middle. There was also noticeable chromatic aberration right across the frame, producing red and green fringes. There was also a major issue with blue fringes around high-contrast edges, an effect common to most small high-resolution sensors.


Image noise was also a problem, again something that is common to most high powered compacts. All ISO settings higher than 200 had visible noise, and 800 and higher were effectively useless. 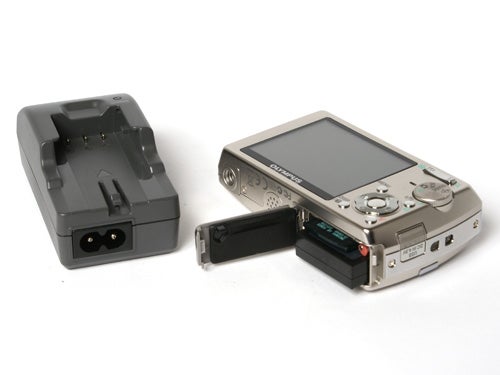 At the highest resolution setting the mju 1000 produces JPEG files of around 4MB in size, which seems to be about average for a 10MP compact, and means that a 1GB xD-Picture card is enough for about 200 shots. Images do show some compression artefacts though, noticeably more so than, for example, the Samsung NV10.


Despite these few problems though, image quality is generally good, certainly good enough for snapshot prints up to A4 size, which is all most users will want out of it.


The Olympus mju 1000 is a camera with some very good points offset by some rather bad ones. It is about average for 10MP compacts in terms of picture quality, with good colour and exposure but poor noise control and some optical problems. Build quality, weatherproof durability, performance and ease of use are all good, but let down by poor low light focusing. The 6400 ISO setting is pretty much useless, but the Perfect Fix feature is very handy. It’s worth looking at if you need splash resistance, but there are better high-end compacts on the market. 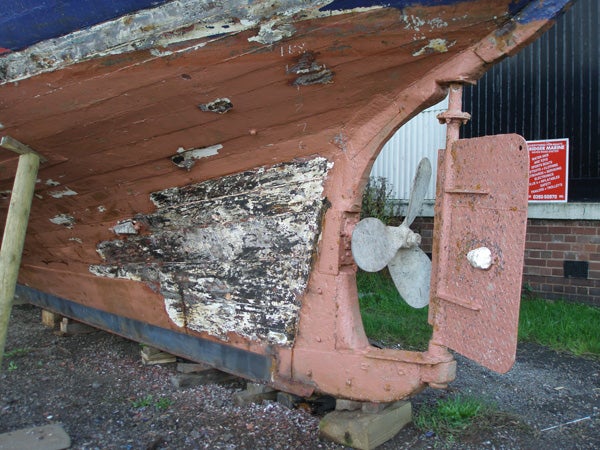 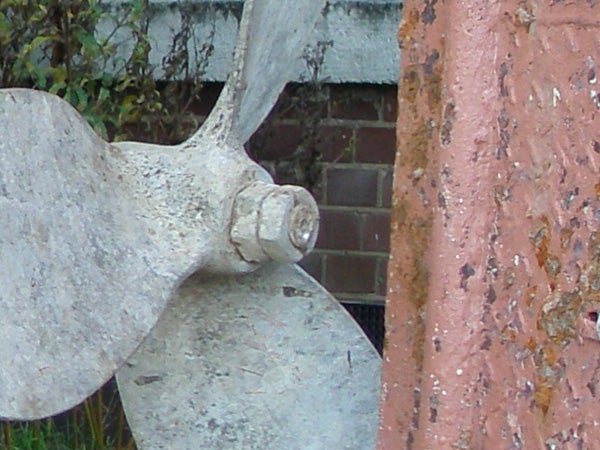 At the lowest ISO setting, as usual there is no image noise. I tried to move the rudder on this boat and was shouted at by the owner, who I didn’t realise was standing behind me. 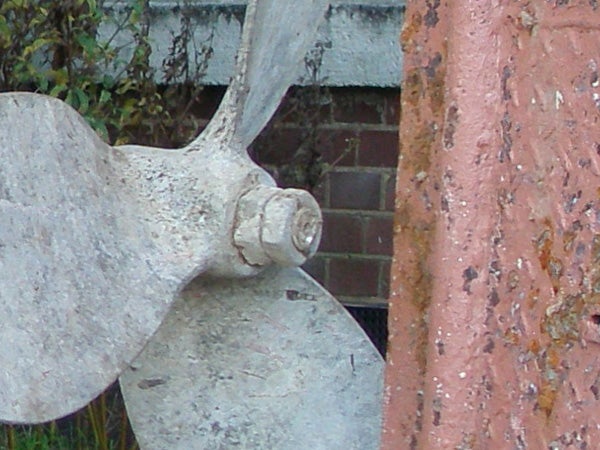 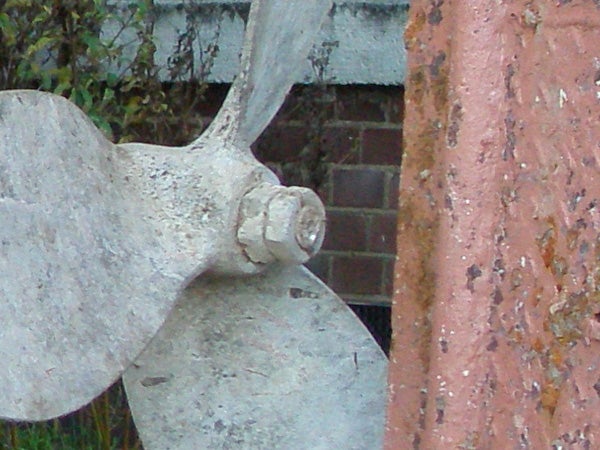 At 200 ISO there is some slight colour noise in the darker areas, but the picture is printable. 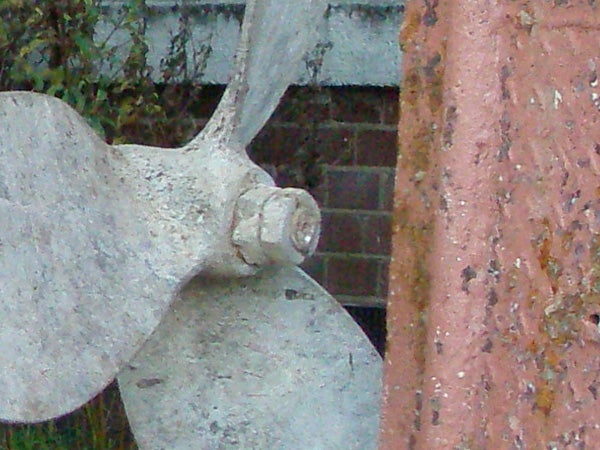 At 400 ISO the colour noise in worse, and a lot of fine detail has been lost in the noise reduction process. 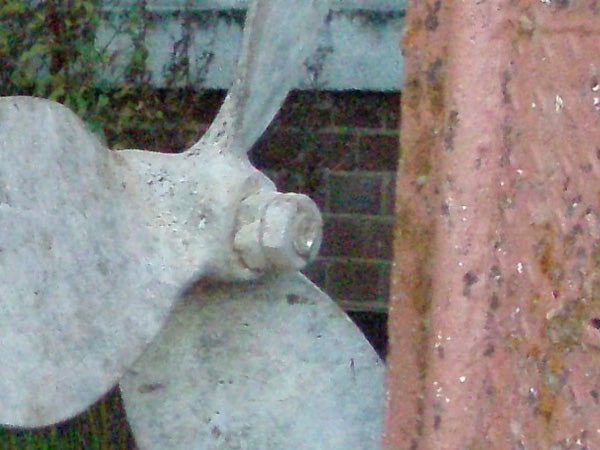 At 800 ISO there is a high level of noise right across the image, especially in the darker areas, and image quality is seriously compromised. 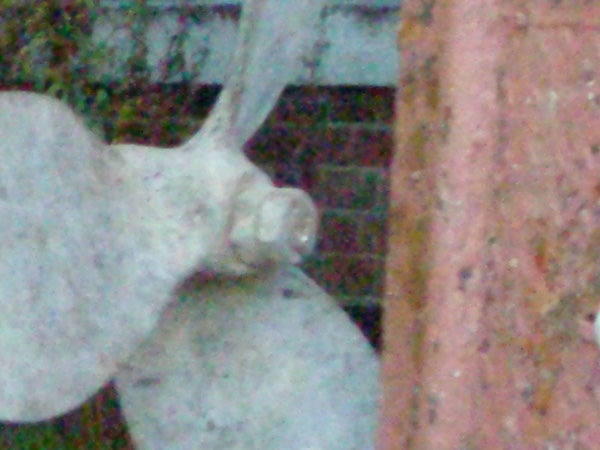 At 1600 ISO the level of image noise is so high that the picture is pretty much useless. 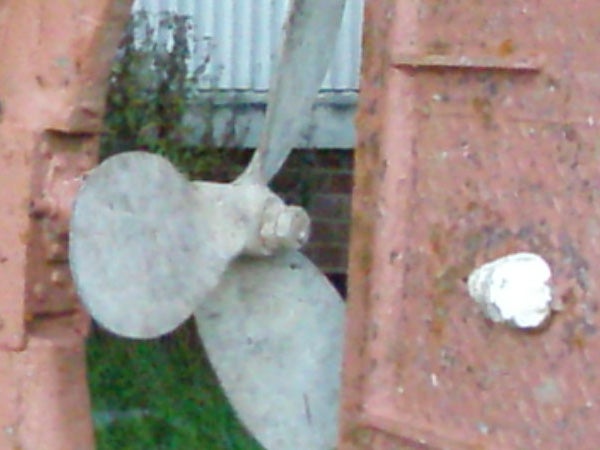 At 3200 ISO the image size is automatically reduced to 2048 x 1536 (3MP). The noise reduction system has removed a lot of detail and the picture quality is awful. 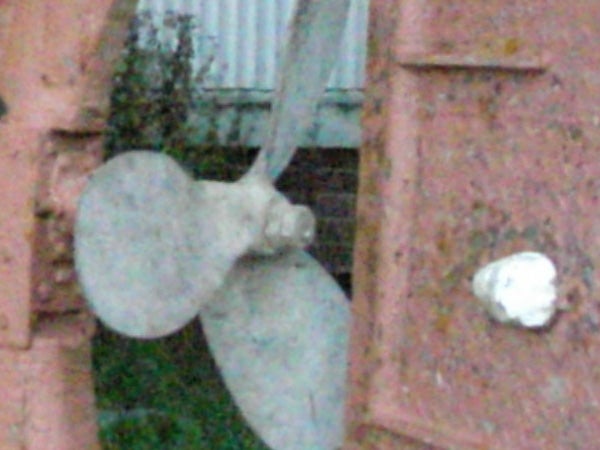 I think Olympus just added 6400 ISO so they could claim the title of highest ISO on a compact camera, but when the picture quality is this poor, why bother? 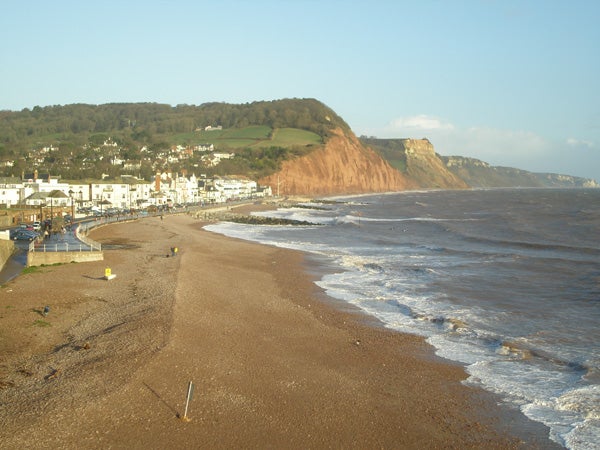 Here’s a shot you may recognise from the 10MP DSLR reviews I’ve done recently. I took the same shot with the mju 1000 to show the difference between a compact and an SLR. 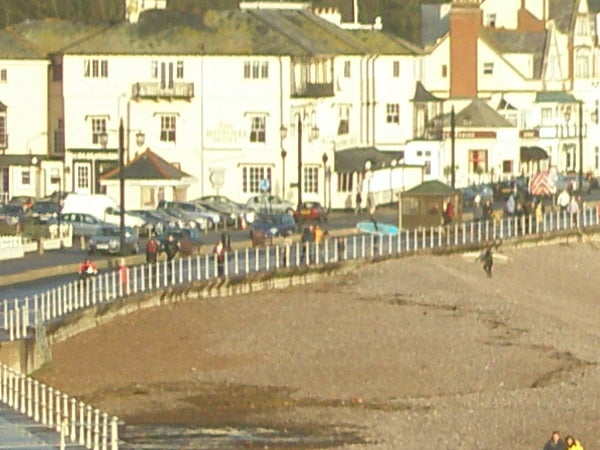 This is a 100 per cent crop from the previous image. Compare this shot with the same one from the review of the Nikon D80 or Olympus E-400. 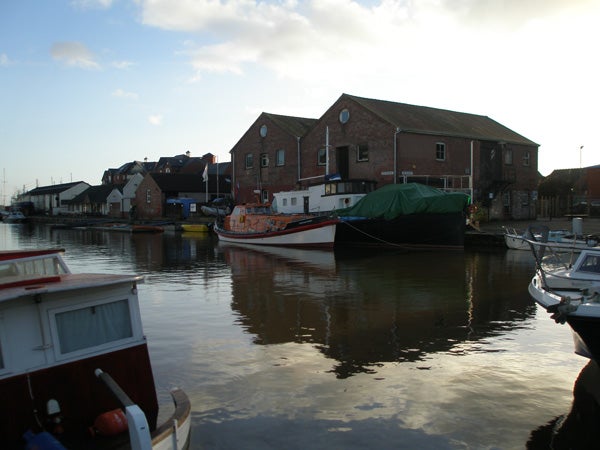 The 3x zoom lens on the mju 1000 has a wide end equivalent to 35mm, which is better than average for a compact. Note also that despite shooting into the sun, the exposure system has retained plenty of shadow detail. And yes, that boat on the left has sunk. 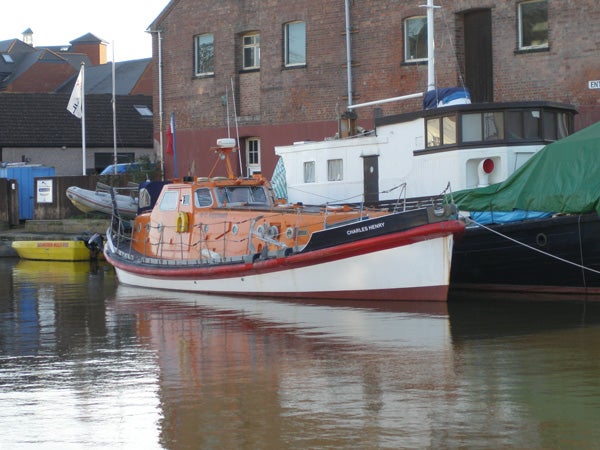 Taken from the same spot as the shot above, this shows the effect of the telephoto end of the zoom range, equivalent to 105mm. The auto ISO has set itself to 125, and there is some image noise, as well as blue fringes in the top left corner. 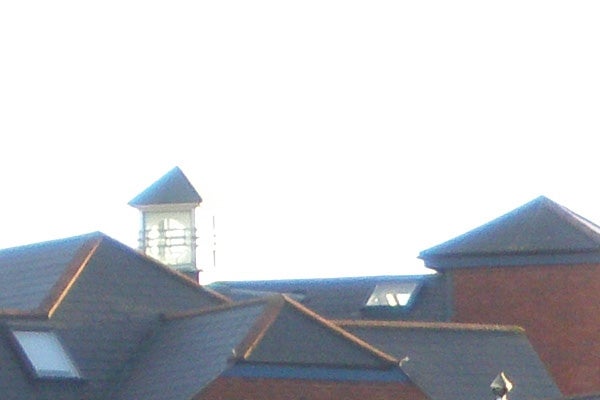 This is a 100 per cent crop of the top left of the previous image, showing more clearly the blue fringes, caused by the photosensors in the overpowered CCD being overloaded and leaking charge. 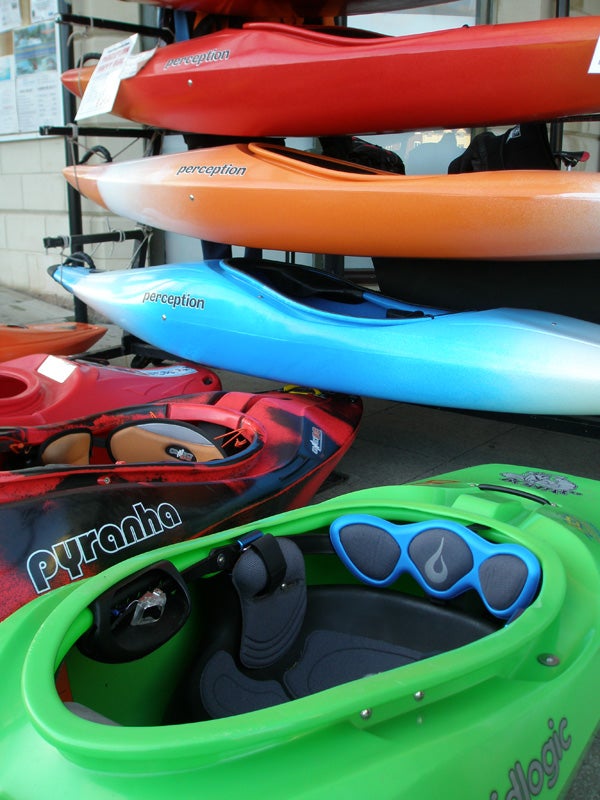 The mju 1000 captures colour beautifully. Even though this was in the shade, the colours are rich and well saturated, without being over-exposed. 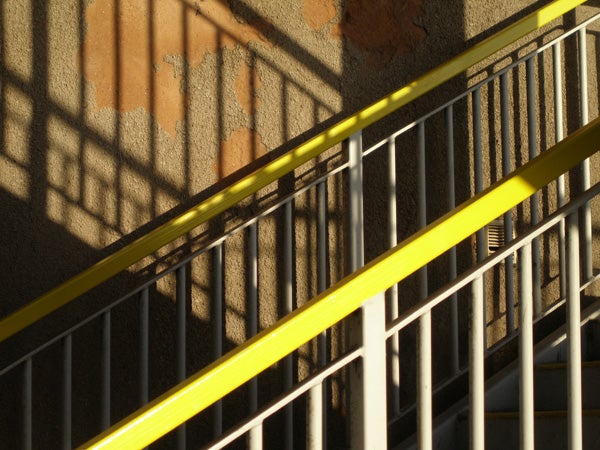 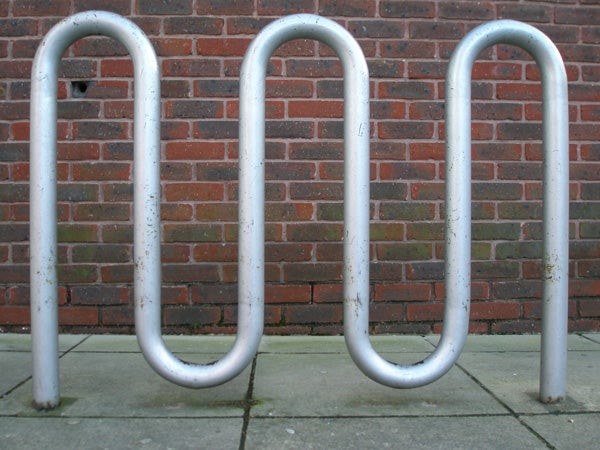 Although it suffers from chromatic aberration and blurry corners, at least the lens doesn’t produce much spherical distortion at wide angle.