Launched alongside the 7-14mm f/2.8 wideangle zoom, the 8mm f/1.8 fisheye brings Olympus’s top-end PRO line of Micro Four Thirds lenses to four. Being a fisheye, unlike the 7-14mm it uses a non-rectilinear projection, rendering straight lines in the subject as curved in the final image. This allows it to offer a much wider angle of view – fully 180° across the diagonal. With a maximum aperture of f/1.8, it’s the brightest fisheye lens on the market. It will be available from June 2015 for £799.99.

The Micro Four Thirds system isn’t exactly lacking in fisheye options already. There are two ‘proper’ fisheyes offering 180° views, namely the Panasonic Lumix G Fisheye 8mm f/2.8 which includes autofocus and electronic aperture operation for £535, and the Samyang 7.5mm f/3.5 UMC Fisheye MFT with manual focusing and aperture control for £315. In addition, Olympus offers the 9mm f/8 Body Cap Lens for just £89, although it only gives a 140° view, and both Olympus and Panasonic make fisheye converters compatible with some of their kit zooms. So you might be forgiven for asking where this one fits in.

The key is that this is lens is a member of Olympus’s PRO series, which means it features solid, splashproof construction and premium optics to go with its fast aperture. We’ve been hugely impressed by Olympus’s existing PRO lenses, the 12-40mm f/2.8 and 40-150mm f/2.8, so let’s see whether the 8mm f/1.8 Fisheye matches up. 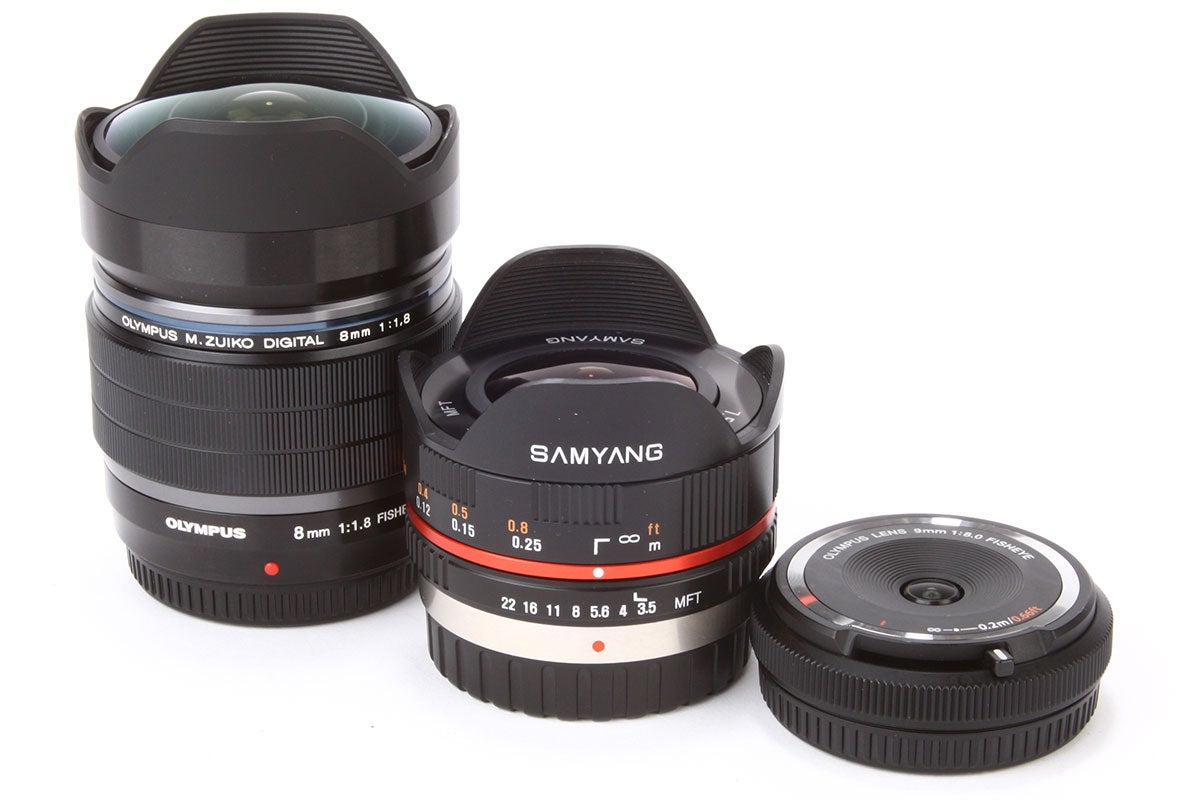 Measuring 80mm long and 62mm in diameter and tipping the scales at 315g, the 8mm is considerably longer and heavier than either the Panasonic 8mm f/2.8 or the Samyang 7.5mm f/3.5. However it’s still the smallest lens in the Olympus PRO range.

Build quality is everything we’ve come to expect in this PRO line. The barrel is predominantly metal-skinned, including the large manual focus ring. There’s a rubber seal around the lens mount to help keep out water and dust, and the integrated lens hood is made of thick, rigid black plastic. The lens is supplied with a chunky cap that clips on over the hood. As with all fisheyes, there’s no way to mount a filter on the front; unlike some, there’s no way to use a rear-mounted gel filter either. 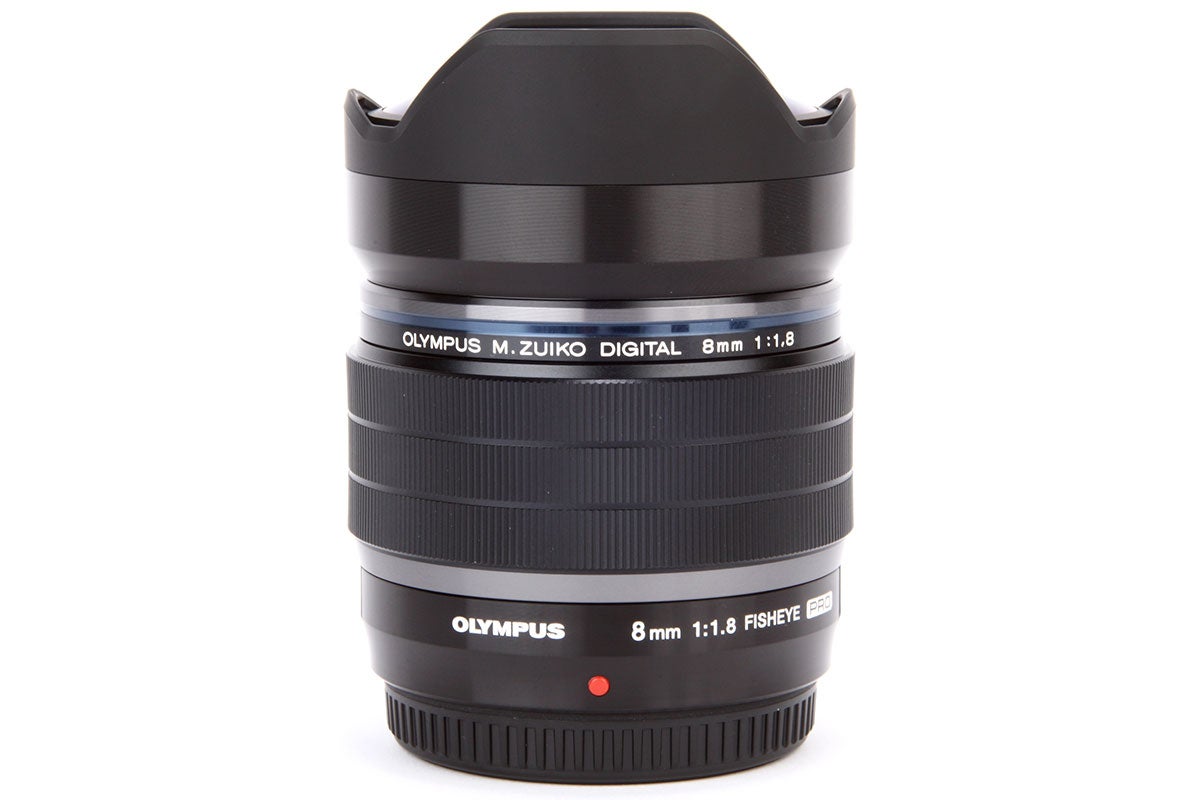 The 8mm f/1.8 uses a stepper motor for autofocus, which is silent and extremely quick. As usual with Micro Four Thirds, AF accuracy is exemplary, but I did find the lens had a tendency to hunt more than usual with close-up subjects.

Unlike Olympus’s other PRO lenses the focus ring doesn’t have a push-pull design to engage manual focus, and has no distance scale either. Instead it’s of a more conventional, freely rotating focus-by-wire type. It still works pretty well, but manual focus doesn’t have the same direct feel as the other PRO lenses. There’s no L-Fn button on this design, which may be an issue if that’s something you use often.

Fisheye lenses aren’t really amenable to conventional lab-based chart testing, so I’m not going to attempt that here. Instead I’m going to analyse real-world pictures taken with the lens, and give my impressions from a day or two using it – suffice to say that they’re pretty positive. Click on any of the images below to download a full-size out-of-camera JPEG.

Fisheye projection and angle of view

The first thing to say is that the 8mm is a fisheye lens, which means it renders lines that are straight in the subject as strongly curved in the final image (unless they pass through the centre of the frame). This isn’t a defect compared to a traditional rectilinear lens – technically it’s a different geometric projection – and it gives a very distinctive look to fisheye shots, along with a massive 180° diagonal angle of view. Taming this curvature is often one of the keys to taking convincing fisheye pictures. 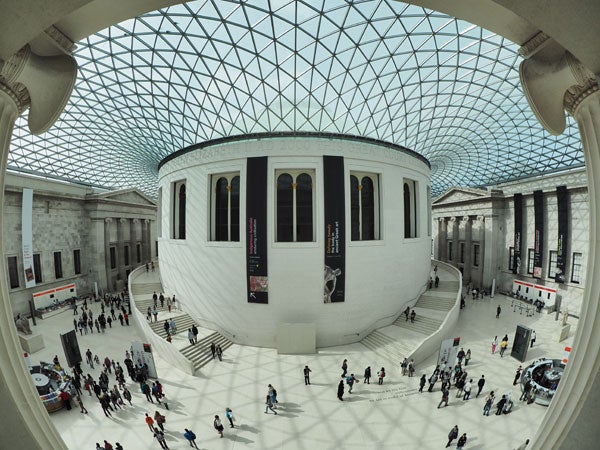 As you might expect, the 8mm gives a slightly, but noticeably narrower angle of view than the Samyang 7.5mm f/3.5 fisheye – here’s comparison shot taken from the same position (but with a slightly darker exposure). 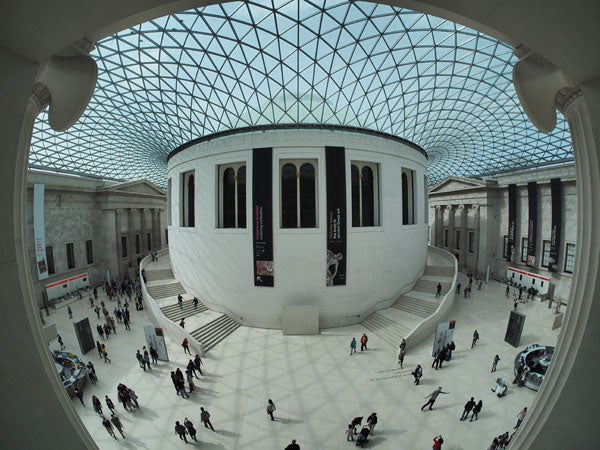 As we’ve come to expect from Olympus’s PRO series lenses, the 8mm f/1.8 is impressively sharp, even wide open. Below is a shot taken at f/1.8, along with 100% crops from the centre and edge of the frame (taken from OM-D E-M5 II out-of-camera JPEGs). 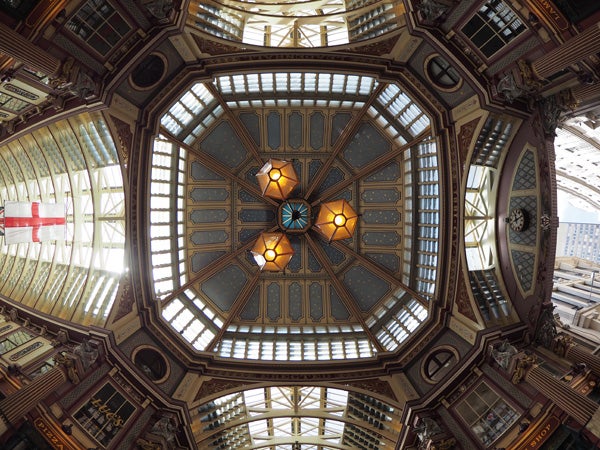 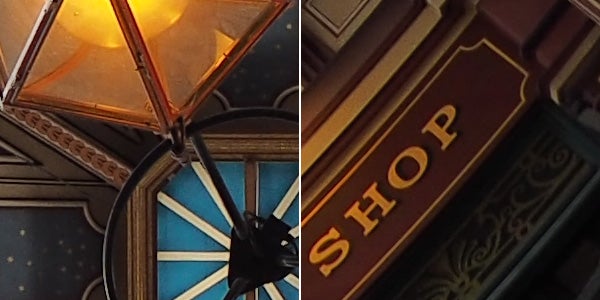 There’s no serious problem with sharpness here, although the corner isn’tt quite as crisp as the centre (which is only to be expected). There’s also some fairly strong vignetting in the corner, which makes it look rather dark. Just for comparison, below is a similar pair of crops at f/4: 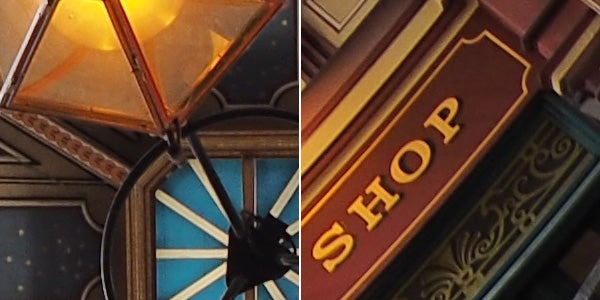 When it comes to lateral chromatic aberration, this is automatically corrected on recent Olympus cameras, including the OM-D E-M5 II used for the samples above; indeed these crops show that corrections are very effective indeed. But we can see how the lens performs by shooting on older body that doesn’t correct CA, such as the original E-M5. Let’s see how this appears at various apertures; in this series we’re looking at 100% crops from the left side and centre of the frame from the scene below: 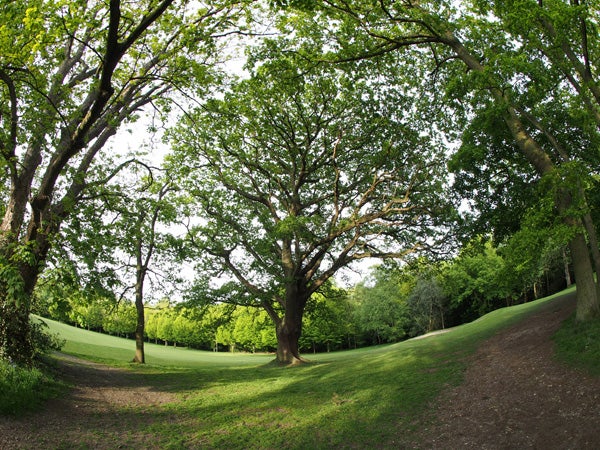 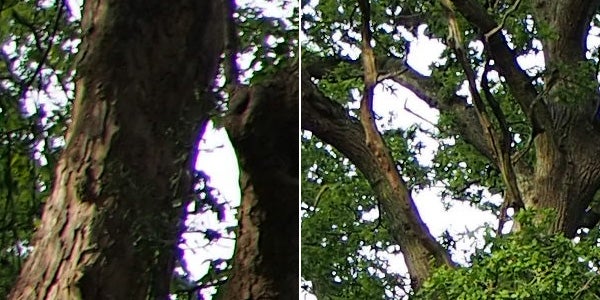 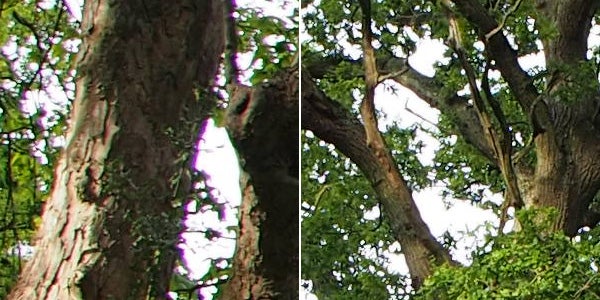 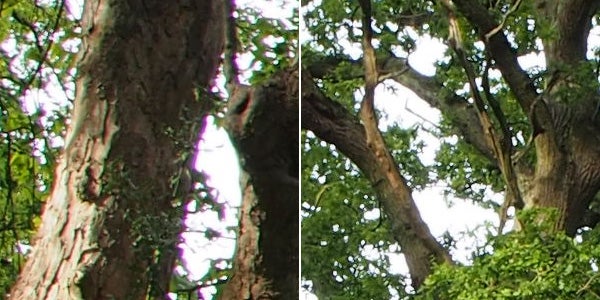 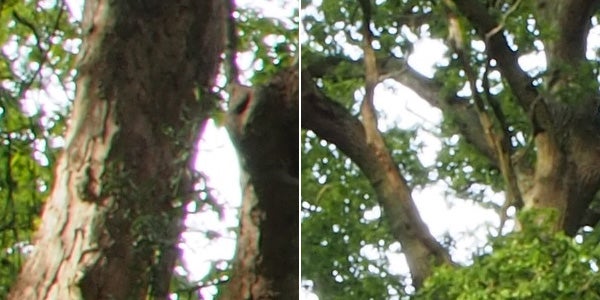 From this you should be able to see that’s there’s visible green/magenta fringing at the edges of the frame, and while it’s rather intense in colour, fringe widths aren’t too extreme, so you’d have to print very large to see it. There’s also just a little purple fringing in the centre of the frame at f/1.8.

In terms of sharpness, the centre is exceptionally crisp wide open, and never really gets better. But the edge looks rather softer at f/1.8, and only really sharpens up properly at f/5.6. Do bear in mind, though, that one of the side effects of correcting CA is to increase apparent sharpness towards the edges and corners of the frame, which helps explain why the previous examples looked better than this. Beyond f/5.6 diffraction kicks in visibly, with f/11 noticeably soft, and f/22 pretty horrible. This is absolutely expected from Micro Four Thirds, which should normally be shot at larger apertures than either APS-C or full frame, with the sweet spot generally around f/4 – f/5.6.

Aside from sharpness and chromatic aberration, other factors are important in overall image quality. Here I’ll take a quick look at some of them.

Flare handling is a pretty important property of a fisheye lens; when you’re shooting outside, that huge angle of view means that the sun can often end up on your shots. My initial impression is that the 8mm handles this very well, with minimal loss of contrast. The shot below has the sun towards the centre of the frame at f/5.6, and aside from a small red flare mark diametrically opposite, there are no ill effects at all. 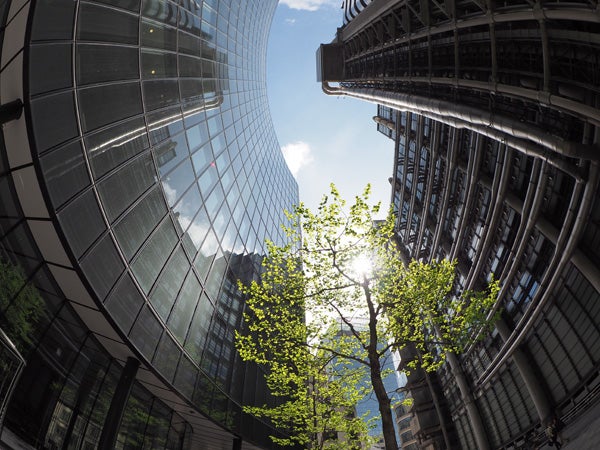 The word ‘bokeh’ refers to the rendering of out-of-focus regions in an image, with specific consideration to their aesthetic quality. Some lenses do rather better than others in this regard; it’s not just a matter of focal length and aperture. I wouldn’t usually even think about looking at this with a fisheye, but the 8mm f/1.8 has a sufficiently large maximum aperture that, if you get in really, really close to the subject, you can get quite strongly-blurred backgrounds: 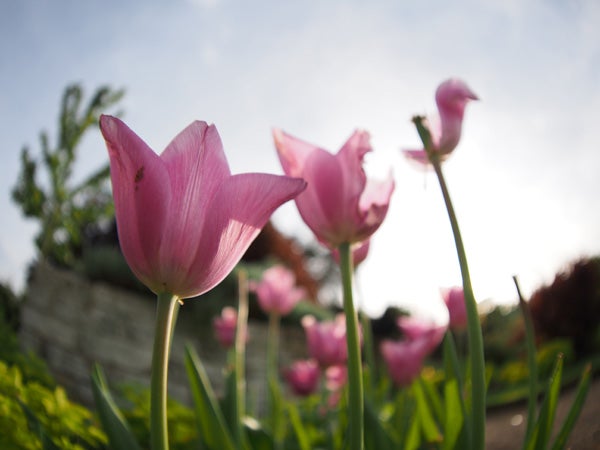 By focusing on the closest flower, just a few centimetres in front of the lens, the rest of the scene has been thrown out of focus. The background is quite smoothly and attractively blurred too. For a lens this wide, it’s a pretty good performance. Note also that the sun is in the bright area of the frame where, and while it’s veiled behind thin, high cloud, again there’s no flare problem at all. 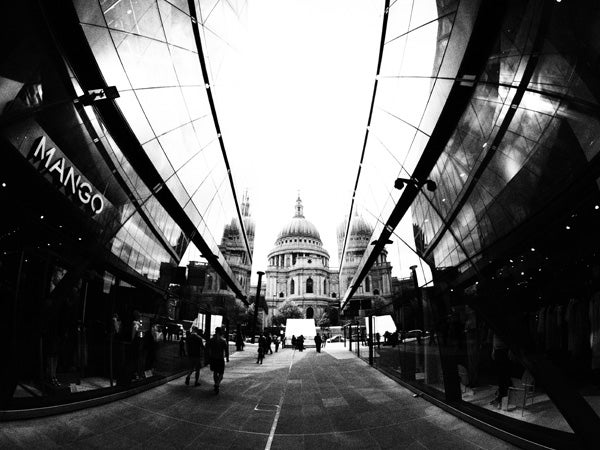 I only had a few days with the lens prior to its official launch to try it out, but suffice to say that on these first impressions, it’s a very decent performer. There’s not a lot to complain about optically, although as you might expect for any kind of wide-angle lens, you’ll get best results if you process out lateral chromatic aberration. Not only does this remove unsightly colour fringing, it will give improved apparent edge sharpness into the bargain.

In terms of design, build and operation, the 8mm f/1.8 is almost everything we’ve come to expect from an Olympus ‘Pro’ optic. I’d have liked to see the push-pull manual focus ring with a marked distance scale, as used on the other lenses in the line, but it’s not really a big deal. Most of the time I used autofocus, anyway, which is quick, silent and decisive.

The bigger question, really, is who needs a weather-sealed f/1.8 fisheye? If you’re OK without sealing, and don’t need the fast maximum aperture, then the alternative Micro Four Thirds fisheyes from Panasonic and Samyang are much cheaper, as well as being smaller and lighter. Both are very good optically too, so you really need to have a specific use for the extra features on offer from the Olympus for buying it to make much sense.

Overall this means that the Olympus M.Zuiko Digital ED 8mm Fisheye 1:1.8 PRO is undoubtedly a niche lens, with rather limited practical appeal to the vast majority of Micro Four Thirds users. But those photographers who can make use of it are most unlikely to feel let down by its performance.