After a flurry of models from the company, including the new semi-pro E-30 and E-450, an upgrade to the entry-level E-420, Olympus has added another completely new E series DSLR in the form of the E-620. Although at first glance it looks like a replacement to the E-520, the 12-megapixel E-620 is destined to sit between that and the E-30.


With the raft of new models and introduction of the new mFT compact from Olympus due later this month, the E-620 shouldn’t be overlooked. The E-620 has the same 12.3-megapixel resolution L-MOS sensor and 2.7-inch articulated screen with live view as the high-end E-30. And it doesn’t stop there. Like the E-520, the new model has built-in image stabilisation and one of the most effective automated sensor cleaning systems. Olympus tend to offer models with similar sensors along with firmware delivered features based on the current processor capabilities. Where their models tend to vary most is in body design, so the E-620 has many key features of the E-30 but in a much smaller package. 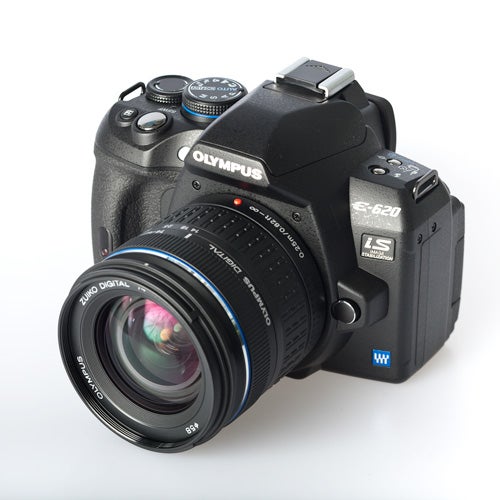 In this instance, it’s the TruPic III+ processor from the E-30, which adds a range of image aspect ratio options (16:9, 3:2, 6:6) previewing of white-balance, exposure compensation, and shadow adjustment (dynamic range enhancement) while also, it’s claimed, improving colour rendition and noise levels. That last point is significant.


At around a quarter the size of a full frame sensor (36x24mm), noise levels and the narrower than average dynamic range of the (17.3x13mm) FourThirds imager have been a concern in the past. With a 20-percent increase in pixel count and sensitivity running up to ISO3200, double that (actually 1EV) of the E-520, the E-620 and E-30 have the highest resolution and sensitivity of any Olympus DSLR to date.


It’s also true meanwhile that while features are added according to the processor, some are reduced in scope. Take the multi-exposure control for instance. The E-620 includes two-frame multi-exposure with overlay and ISO gain option, whereas the E-30 can take as many as four exposures on the same frame. Neither is the E-620 quite as a fast when it comes to sequential shooting. At a maximum 4fps, it’s around 0.5fps faster than the E-520, but doesn’t have quite the lick of the semi-pro E-30’s 5fps. And while continuous shooting of JPEGs is only limited by the card capacity, the five frame RAW buffer is well behind that of the 15-frame capacity of the E-30. 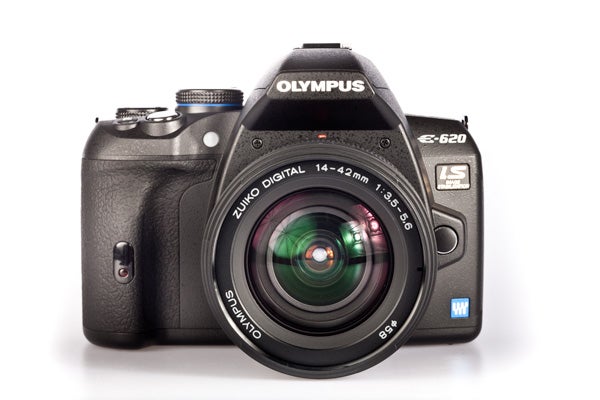 Like that particular model, Olympus is also heavily promoting the addition of six effects filters, or Art Filters. Effects include a super saturated Pop Art, Grainy Film (B&W), Soft Focus, Pin Hole, Pale and Light Colour, and a silky Soft Focus option. At first glance these seem a bit gimmicky but when used appropriately they can come in quite handy.

One big difference between rival options is that you can see the effect before pressing the shutter button; with the E-620 they’re selected like a shooting mode and are previewed and captured using the live view system. This and the articulated 2.7-inch screen are a real highlight. It might not have the same number of dots as the 920k of the 3-inch panel found on the Nikon D90, but in terms of clarity and colour the HyperCrystal III LCD on the E-620 is even an improvement on that found the E-30. 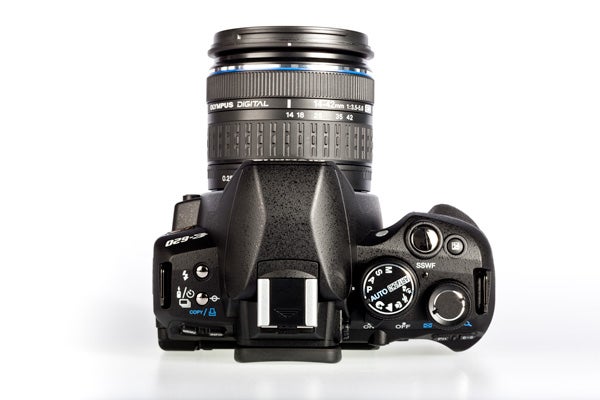 Although the body resembles that of the E-520, it’s more like the E-450 with a slightly larger grip. While it’s true the layout is broadly similar to both those models it’s the adoption of the E-450’s smaller PS-BLS1 1150mAh Li-ion cell rather than the longer lasting 1500mAh PS-BLM1 of the E-520 that allows the reduction in size of the grip.


Of course the big change is the addition of the articulated LCD. The hinge is located to the left, like the E-30 and E-3 models, so the buttons positioned there on the E-520/E-450 have had to be re-located. Two of the four, providing access to the main menu and the Info button have been moved to the shoulder of the top-plate, to the left of the viewfinder. While easily reached with your left thumb, both buttons are quite small. 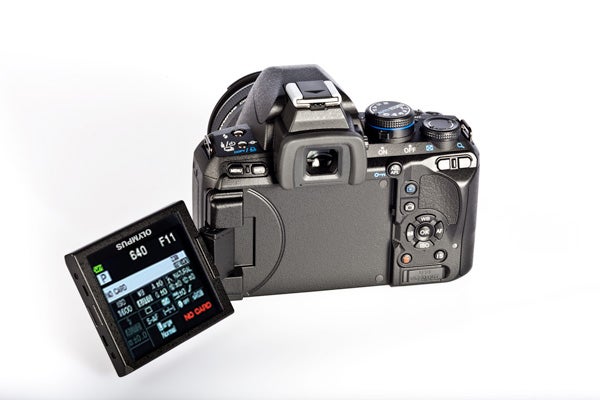 Playback and Delete buttons now reside near the direction pad, making the back look quite busy but not impacting negatively on handling or operation. One nice touch is that particular group of controls there are now backlit, making the E-620 much easier to operate in low-light conditions, when on a tripod for example.


While the outer shell is made from glass-fibre reinforced plastics, the finish seems like a notch or so higher than previous offerings. In handling terms, the smaller grip is an improvement when the E-620 is paired with the kit lens, and the others in that series, but the larger and heavier pro and semi-pro lenses don’t balance so well. What’s more it’s aggravated somewhat by the lack of an optional bolt-on battery pack, which would help offset front heavy lenses.

Live View operation is very slick, with a choice of either viewfinder and L-MOS imager based AF operation. A wide-area 11-point system with a face-detection option is handy for groups and over-head shots. Focus operation in LV mode is understandably slower, even when using the viewfinder AF mode, but the additional versatility is welcome nonetheless.


Another AF option, accessed using the Info button, with the ability to place an AF target anywhere on the screen is similarly handy for macro and studio applications. Image magnification options of 5x/7x/10x operated from the OK button are essential for focus accuracy but also further the attraction. 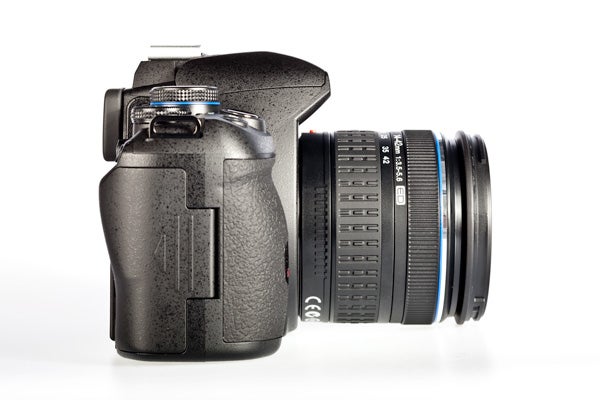 
Turning off the LV mode and using the optical viewfinder is the most likely mode of operation for most day to day shooting, and it’s here that the E-620 reveals another shortcoming. Like the E-520 the viewfinder is small and a bit cramped, though that’s partly due to the native 4:3 aspect ratio as well as the sensor size. 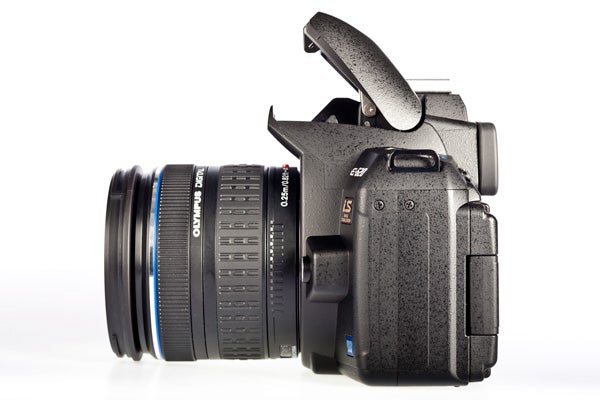 Gone is the three-point viewfinder AF system of the E-520 too. It has been replaced by a 7-point system, based on the E-30’s 11-point AF module. Focus accuracy was generally very good, however, but the four outer points of the E-30’s central group are missing, so while fine held horizontally, some lack of coverage is noticeable when holding the camera vertically.


Viewfinder information has been expanded to include the selected ISO and the E-620 displays the chosen ISO if left to Auto ISO, so between that and the excellent main LCD acting as an info panel you know what’s happening at all times. I should also add that the viewfinder data has been moved from the side to underneath the focusing screen. I kind of liked it where it was, but there were many who didn’t.

If you’re new to Olympus, most day-to-day features are selected from the info panel using a combination of the various buttons and the command dial. Olympus was one of the first to offer the option, and it remains one of the best systems; being both quick and intuitive to use. 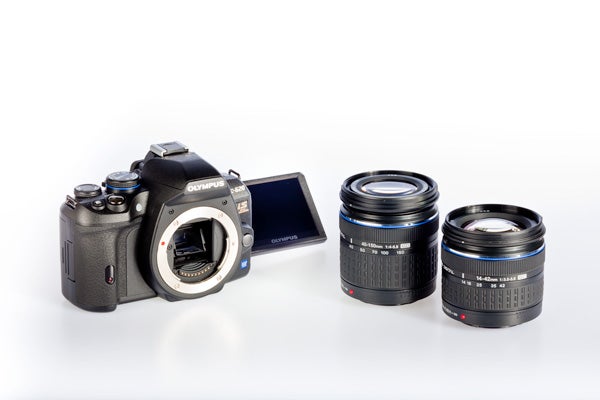 Picture quality isn’t necessarily an improvement over the E-520, but there are differences. For one there’s more detail at lower ISOs but the incidence of noise is increased slightly at higher ISOs. That said, Olympus has both altered and improved noise reduction algorithms, as the once distracting coloured speckles are all but eliminated (with the exception of the deepest shadows) from out-of-camera JPEGs up to ISO1600.


Raw files have a little more detail to give, and have more dynamic range than I expected, though this can be seen to a point with the results of the shadow adjustment technology at work using the Auto Gradation option. Dynamic range doesn’t equal that say of the APS-C D90, but the image integrity (colour rendition, tonality and the rest) is very good, even at high ISOs.


Metering tends to favour shadows, often clipping bright highlights but at least it’s a pretty consistent result, and one you can compensate for if need be. The bundled Olympus Master 2 Raw conversion software is often overlooked as a reasonable, if a little clunky utility. If that’s not up to scratch you can always plump for the latest edition of Photoshop’s ACR plug-in for Elements, or if you can stretch for the full version then, Photoshop CS4. 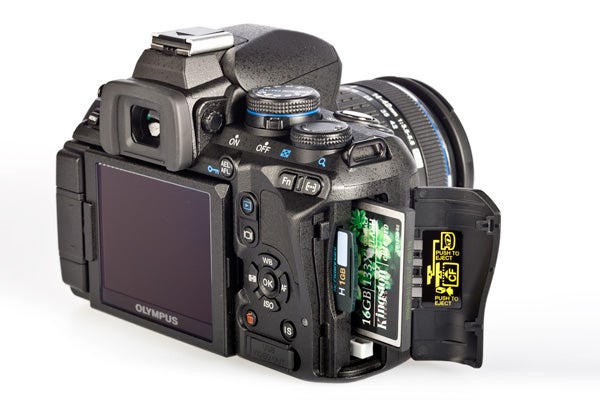 
Although according to Olympus the E-520 is staying in the range, in many ways the E-620 can be seen as the natural replacement. Inevitably some features have filtered down from the E-30, which is a good thing but that camera is significantly larger and heavier and a good deal more expensive.


So while the E-620 fits well into the Olympus line-up, it has to go head-to-head with the likes of the slightly more expensive yet video-enabled 12MP Nikon D5000 and 15MP Canon EOS 500D. Both are extremely strong contenders for your cash, but unlike previous years the differences now maybe just too close to make the call, unless video is your thing. 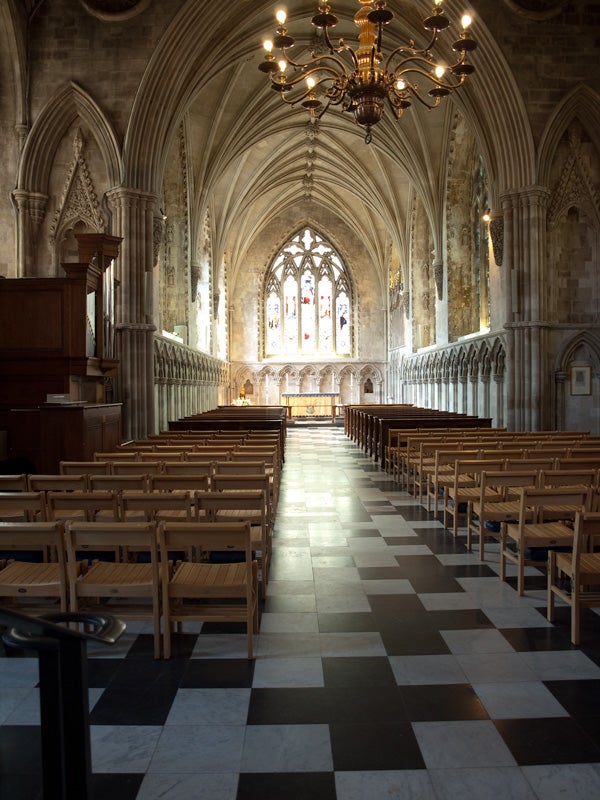 This the full frame at ISO100 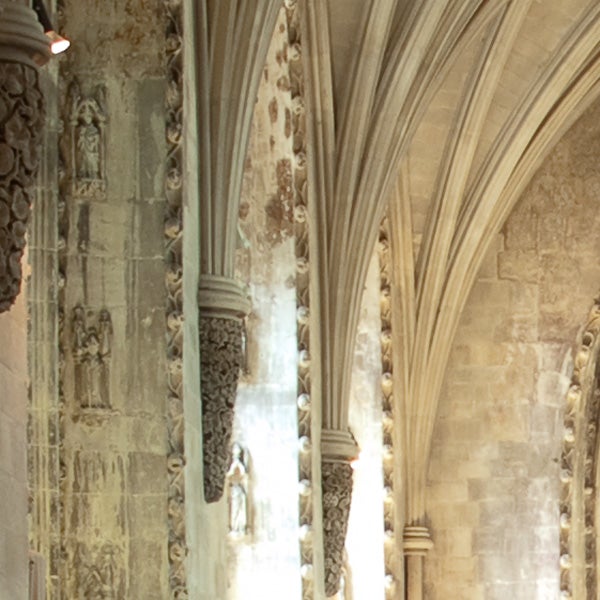 At ISO100, and with gradation set to Normal, image quality is high, with good tonality, colour and high levels of detail. 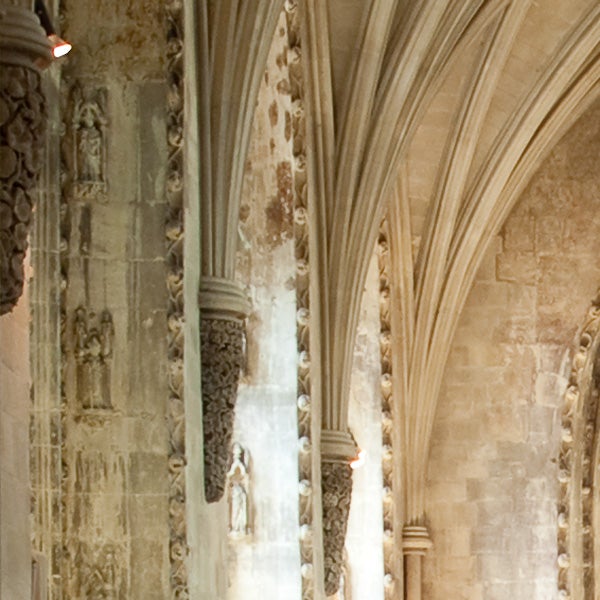 At ISO200, there’s slight improvement in contrast and apparent sharpness. 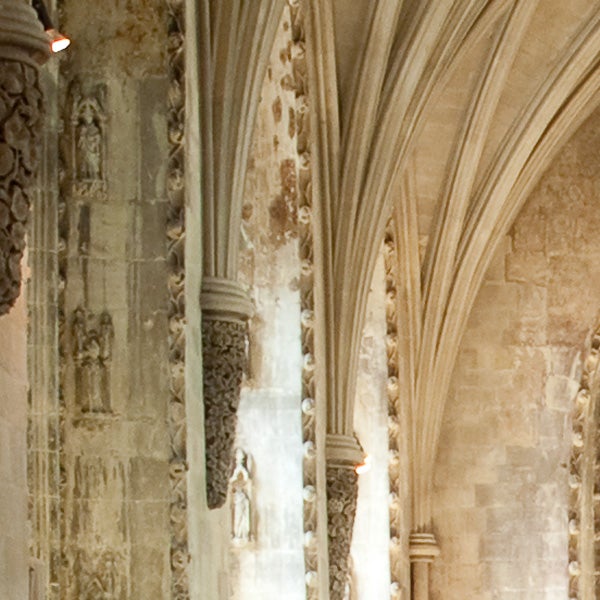 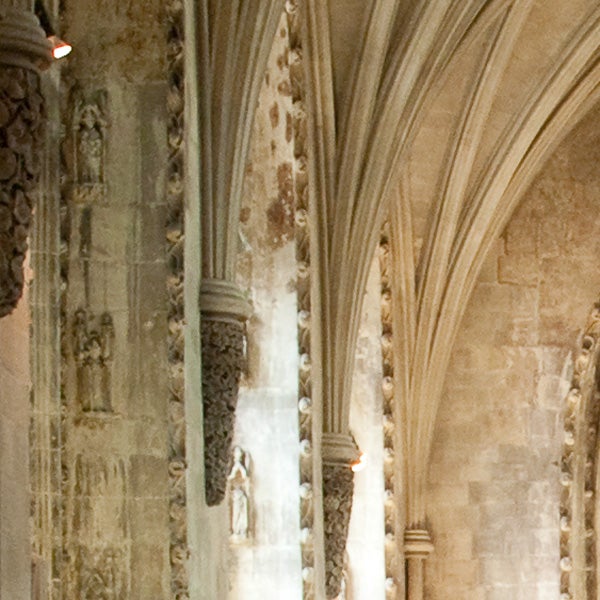 At ISO800 there’s slightly gritty luminance noise, and quite noticeable colour speckling in the darker shadows. 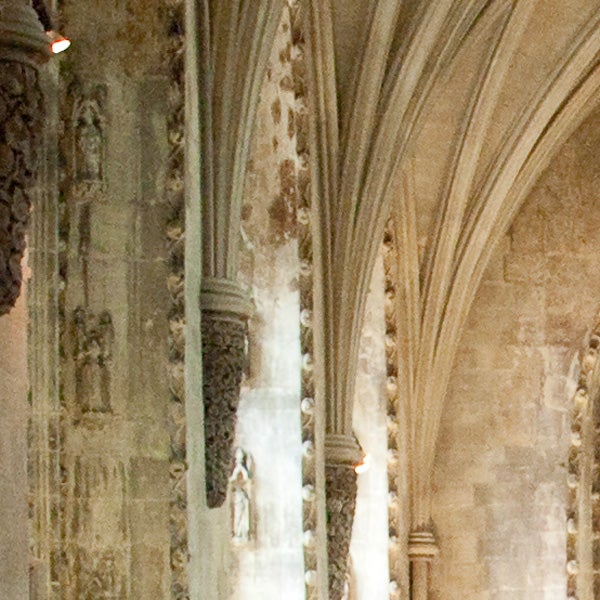 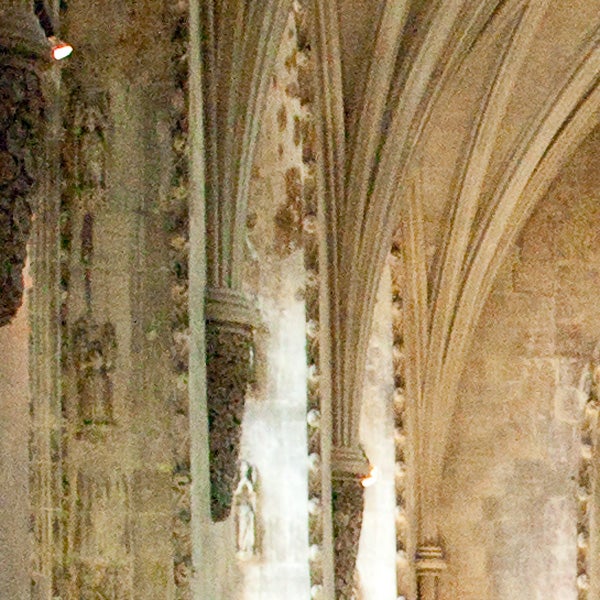 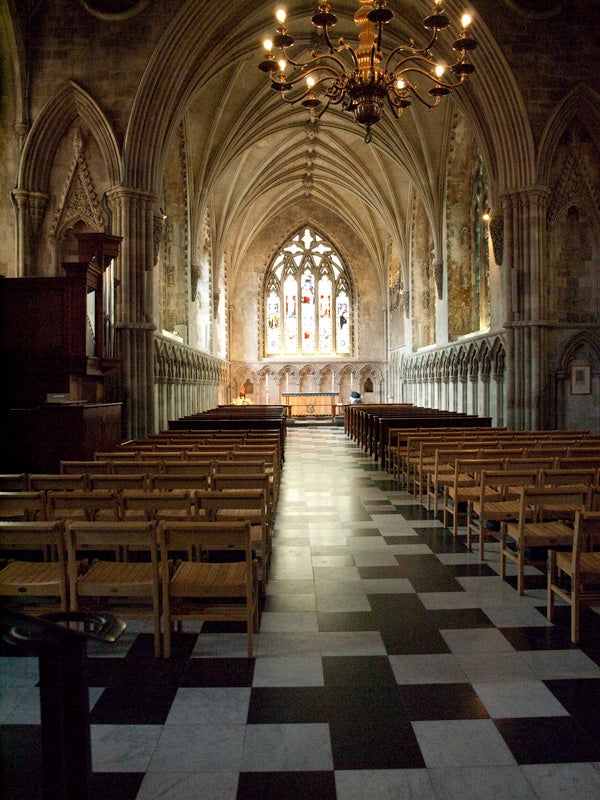 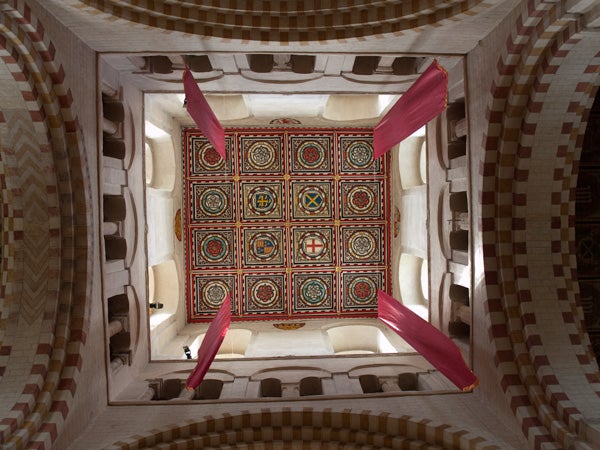 This is a detail shot of the ceiling under the Bell Tower of St Albans Abbey. 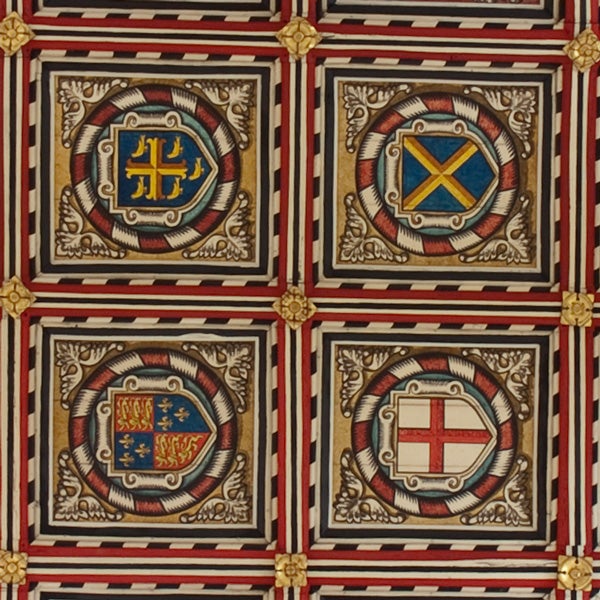 Unfortunately, this shot can’t be compared directly with some of the other reviews, but the 12MP resolution sensor is capable revealing high levels of detail at ISO100. 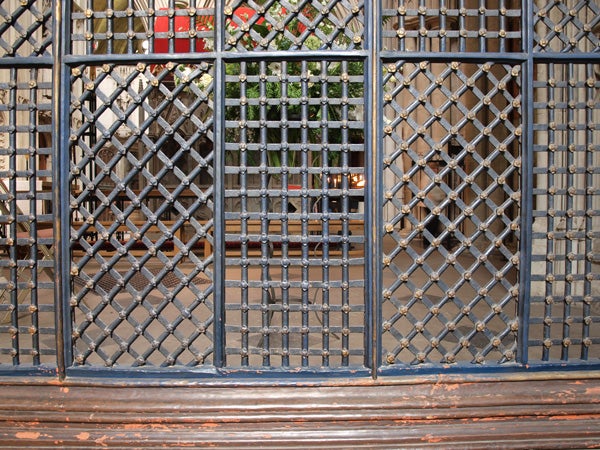 The 14-42mm kit lens is generally a good performer for the price, but has a fair amount of barrel distortion at its widest. 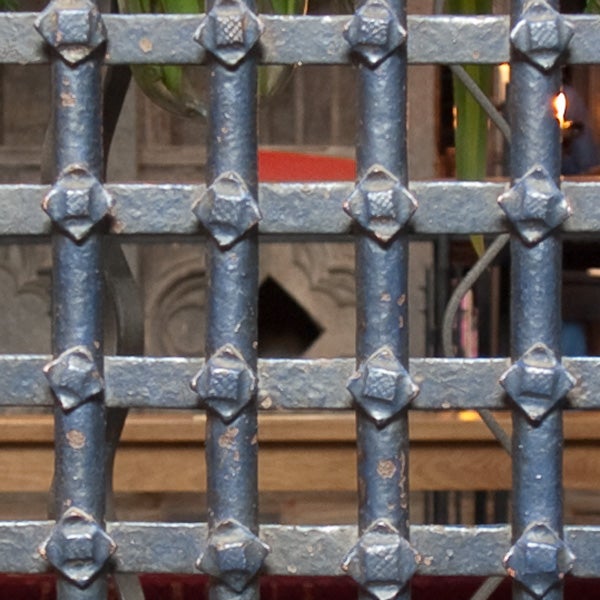 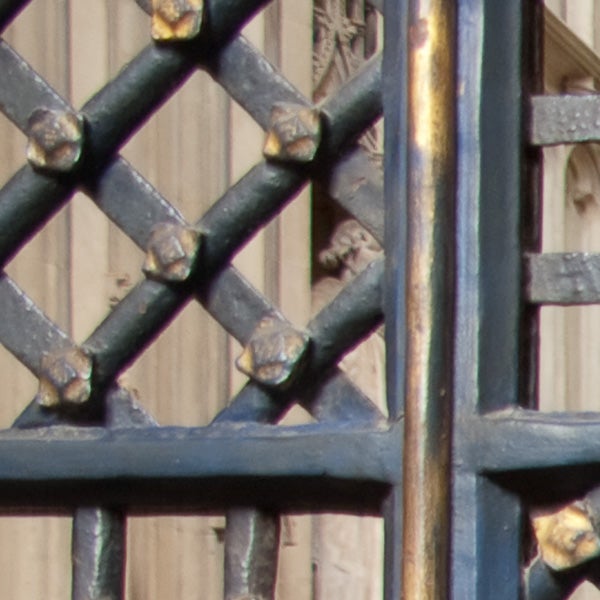 Corner sharpness was slightly softer still and there’s some green and purple fringing and it’s not just evident at the corners but at the edges of the frame too.

Here are some general test shots to help evaluate the camera’s overall image quality, including the zoom range of the lens. Some pictures may be clicked to download the full size original image. 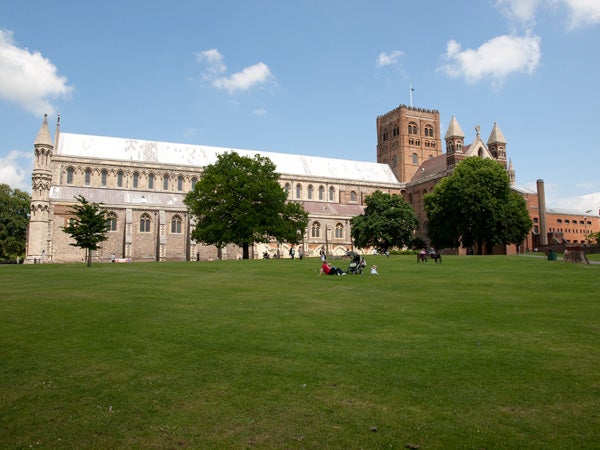 This demonstrates the field of view (FOV) using the E-620 and 14-42mm kit lens at its widest setting (equivalent to the FOV of a 28mm in 35mm format). 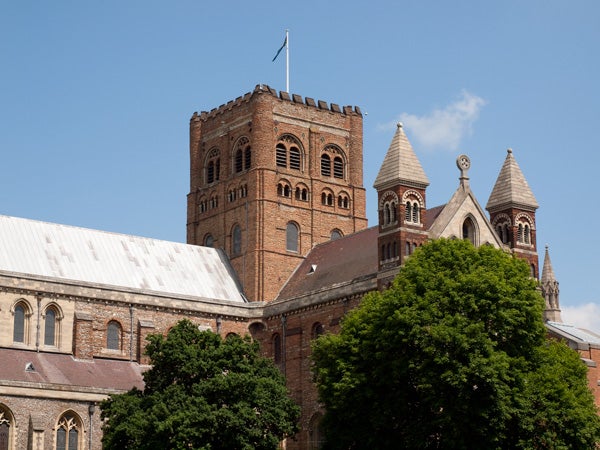 From the same spot I’ve zoomed into the bell tower of the Abbey using the 42mm setting of the kit lens (equivalent to the FOV of a 84mm in 35mm format). 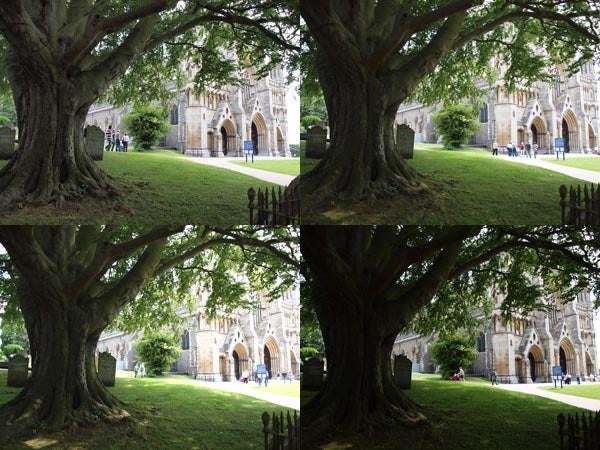 In this sequence of four handheld images from out-of-camera JPEGs, you can see the effects on exposure using the following DR enhancement (Gradation) options (from left to right); Auto Gradation, Normal, High Key, Low Key. Notice the shadow detail on the trunk and the grass to a lesser extent. 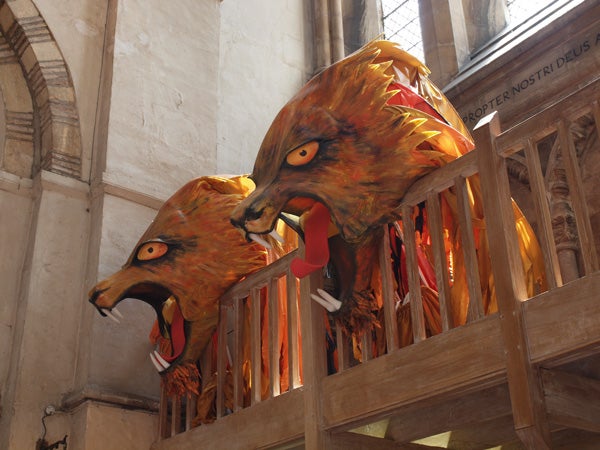 Metering can be difficult to second guess in today’s DSLRs, especially those using DR enhancing algorithms. However this shot was originally underexposed (from the strong backlighting) so I switched to spot metering instead.