The E system from Olympus is the only digital SLR system designed from the ground up to be wholly digital. All of the other D-SLR systems from other manufacturers are based, at least in part, on existing 35mm film SLR standards, including body designs, lens mounts and even lenses. 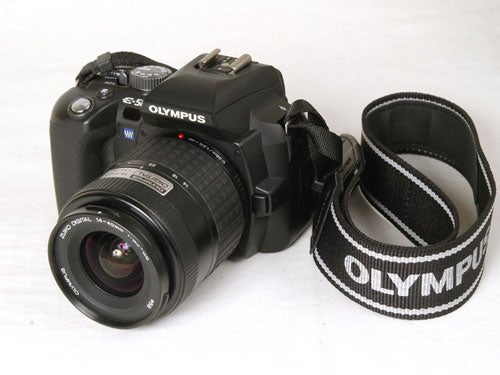 There are advantages to both approaches. For the other manufacturers, it means that existing SLR system users can make the switch to digital without having to replace their expensive lens collections, and will be familiar with the controls and handling of their new camera. Brand loyalty is a major feature of the SLR market, and a Canon, Pentax or Nikon user is likely to stay with the same brand for life, spending thousands of pounds on accessories – a highly profitable market of which all the manufacturers would like a part.


Olympus however took the brave decision in 2001 to cease production of its long running and extremely popular OM 35mm SLR system, and instead to develop an all-new digital SLR system based on the high-quality 18 x 13.5mm 4/3 (“Four Thirds”) format Full Frame Transfer sensor, with a new smaller, lighter lens format purpose-built to match. A few other manufacturers have also signed up to develop 4/3 format cameras and lenses, but so far Olympus is the only one to have launched actual products, starting with the E-1 professional SLR in 2003, which was well received but priced too high to compete with the consumer-oriented digital SLRs that are now starting to dominate the market. 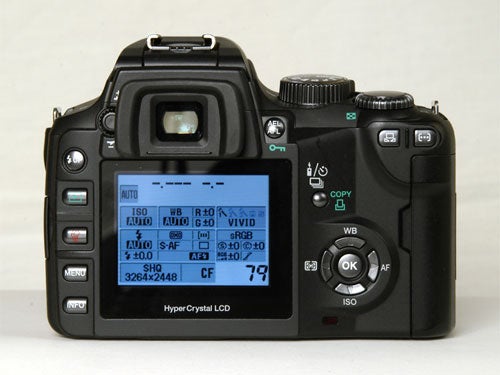 The launch in 2004 of the second 4/3 SLR, the E-300, was less popular, which is odd because the compact 8MP SLR was a very good and competitively priced camera. However it had a body shape resembling a high-end compact camera, which may have put some people off.


Finally Olympus has come up with a product that can take on the likes of the Canon EOS 350D, Nikon D50 and Pentax *ist DL. The E-500, launched at the end of last year, is a conventionally-styled lightweight and relatively compact D-SLR which offers all the advantages of the 4/3 system at a price of just £549 including a 14-45mm standard zoom lens. With 8MP performance and a wide range of manual and creative options available, it is aimed squarely at the amateur/hobbyist end of the market. 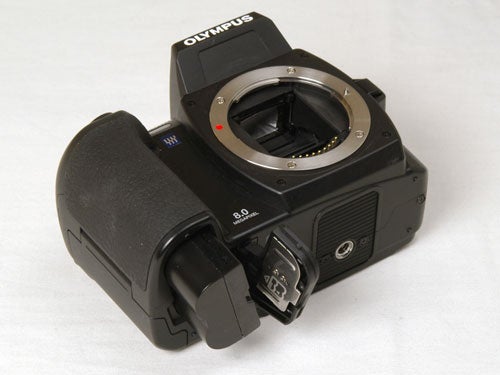 The initial impression of the camera is overwhelmingly favourable. The E-500 is a very handsome piece of kit, with a solid and businesslike appearance. It is almost exactly the same size as the market-leading Canon EOS 350D, but thanks to its plastic body it is around 60g lighter. Despite its comparatively small dimensions the control layout is sensible and uncluttered, while still leaving room for a big high resolution 2.5in LCD monitor and a large comfortable handgrip. It has to be said that the plastic body also means that it doesn’t feel as solid and well made as some of its competitors. In fact I would go as far as to say that in places the finish feels decidedly flimsy. 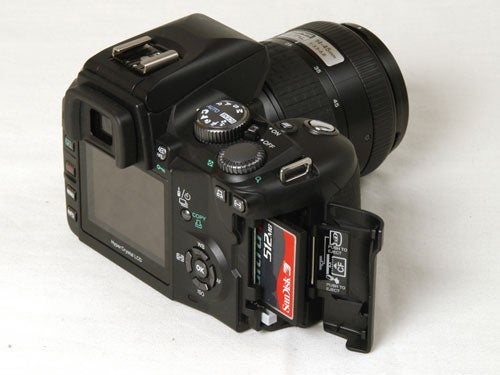 Although the E-500 is designed for the keen amateur rather than the professional photographer, Olympus hasn’t skimped on the features or performance. The camera starts up almost instantly, and has a very fast buffer-to-card write time. In continuous mode it can fire off five SHQ frames in around two seconds, before pausing to write, but the camera is only locked up for a couple of seconds before you can shoot again Considering that the SHQ JPEG files are around 5MB each that’s not bad at all. Shooting in RAW or TIFF takes a little longer, but even the big 23MB TIFF files only take about six seconds to write to a decent CF card.


The main picture taking options are on the mode selection dial. As well as the usual manual, program, auto and aperture or shutter priority, there are portrait, landscape, macro, sport and night scene program modes. The Scene option offers 15 more special programs for situations such as document copying, fireworks, snow scenes and more. 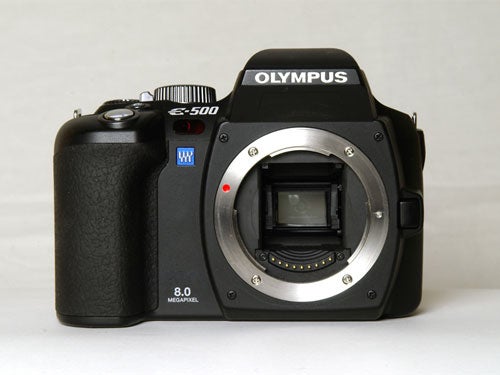 Of course a real photographer never uses such things so to help with proper creative photography the E-500 offers multi-pattern ESP metering, widely regarded as one of the best metering systems available, with the option to link the metering to the selected AF point, as well as centre-weighted and three different spot metering options. Combined with the unprecedented exposure compensation range of +/- 5 stops and there’s really no excuse for incorrect exposures. AF options include continuous, single shot, and manual, with the option to combine the first two with manual focus, so you can fine-tune the focusing point manually. Focusing is very quick and accurate, although I was slightly disappointed that there were only three focus points to choose from. Many D-SLRs offer a wider range. 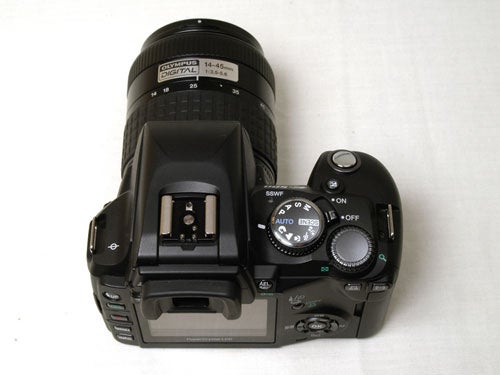 The range of colour options is perhaps the most impressive feature. Settings include the usual natural, vivid, muted, monotone and sepia, but each one can be customised with individual settings for contrast, sharpness and saturation. The monochrome and sepia settings also have four optional colour filters and five output colour options, providing some interesting creative combinations. By using these options with the ISO setting it is possible to mimic traditional darkroom effects such as duotones, push-processing and sepia toning. This huge versatility makes the E-500 one of the best digital SLRs on the market for black & white photography. Of course the supplied RAW converter software can duplicate all of these effects, but it’s still a lot of fun playing about with them while you’re out shooting. 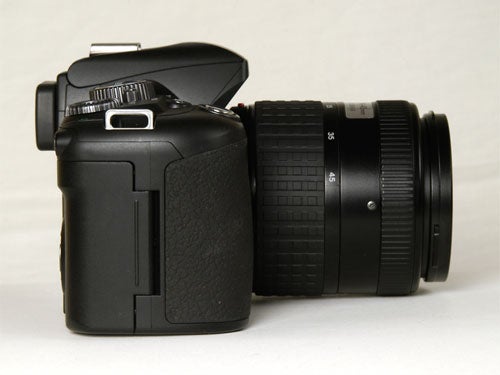 In terms of picture quality, the E-500 is exceptionally good, providing crisp clear photos in virtually all conditions. Colour rendition from the TruePic TURBO image processor is as close to perfect as it’s possible to get for under £600, and contrast, detail and sharpness are as good as anything else in its class. The supplied 14 – 44mm lens does an excellent job, providing superb corner-to-corner sharpness and a minimum of barrel distortion. The camera has a bewildering array of ISO settings, from 100 to 1600, and these are virtually noise-free below 400, and quite usable up to 800. 1600 is a bit rough, but not appallingly so. 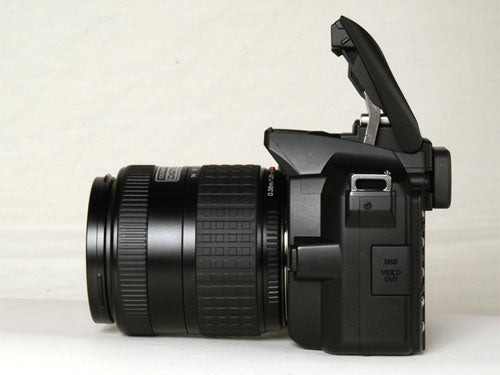 As usual with my SLR reviews I’ve run out of space before I’ve had a chance to talk about all of the camera’s features, such as the built-in ultrasound CCD cleaner, but I must quickly mention one or two minor problems. I’ve already mentioned the questionable build quality, and this is nowhere more noticeable than on the card and battery hatches. They are both very flimsy and could be a source of problems if roughly handled. The viewfinder is very small compared to other SLRs, and the information displayed beside it is poorly labelled and hard to read. Although there is an info button that displays shooting data on the main monitor, the lack of a separate data display is an annoyance. Just a display of the number of shots remaining would have been helpful.


Other than those points though, the E-500 is a great little camera, and the perfect choice for a first digital SLR for anyone thinking of taking the plunge.


The E-500 should secure Olympus a place on the lucrative consumer D-SLR shelf alongside the Nikon D50, Canon EOS 350D and Pentax *ist DL. It is a very well designed camera, combining excellent picture quality, outstanding performance and lots of creative versatility, while still maintaining beginner-friendly simplicity and easy handling. It is a genuine pleasure to use, and produces superb results. If you’re looking for a good SLR for under £600 with a lens, then it should definitely be on your shortlist.

Note: The E-500 has 13 different ISO settings, ranging from 100 to 1600. I’ve just selected 5 samples here, to show the camera’s performance at low, middle and high settings. All these shots were taken outdoors using what little natural light could find its way to England through a 20 mile thick layer of rain clouds. 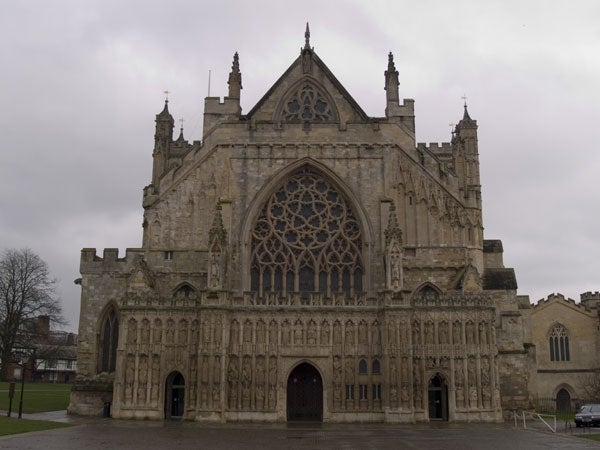 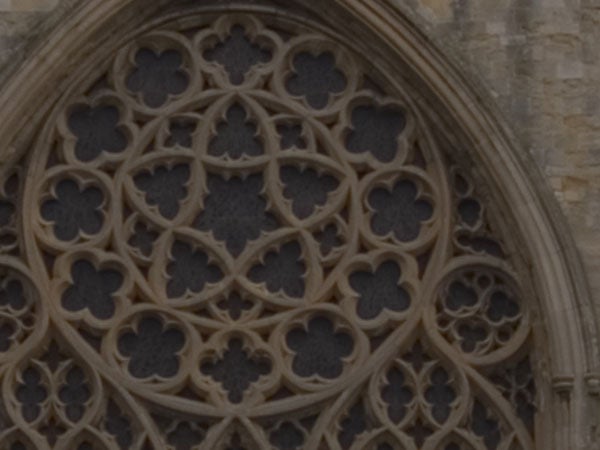 At the minimum sensitivity setting, the picture is smooth, highly detailed and completely noise free, which is just what you’d expect from a camera in this class. 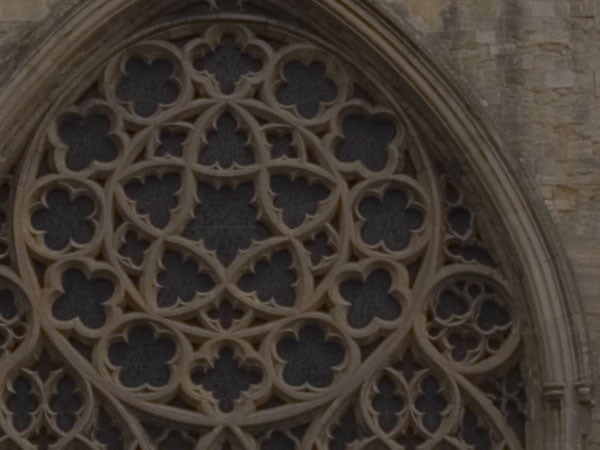 Up two positions to ISO 160 and the image is still perfectly fine. In fact the slightly increased contrast makes it appear even sharper and more detailed. 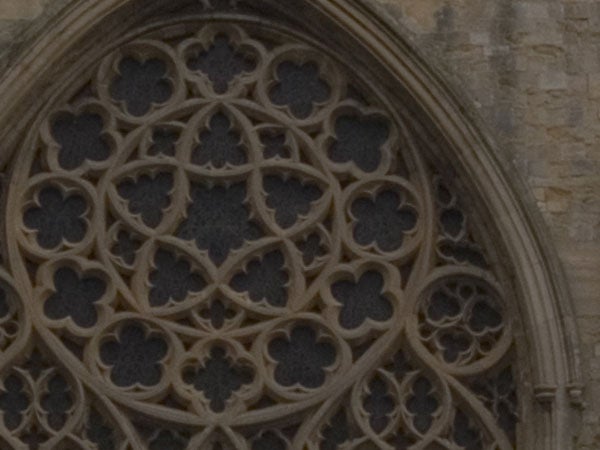 Up four places to 400 ISO and some noise is now just starting to appear, but only in the darker shadows. It is minimal though, and the picture remains sharp, clear and detailed. 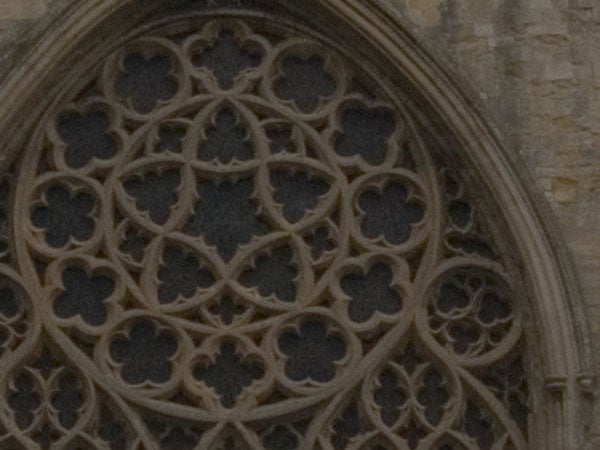 Up another three places to 800 ISO, and there is now definite noise visible in the darker areas, although colour rendition remains consistent and the image still has a lot of fine detail. 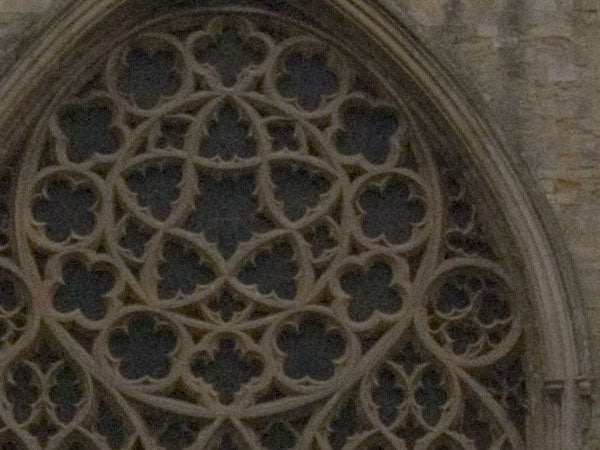 At the highest ISO setting there is noise plainly visible right across the image, and colour rendition has broken down in the darker areas. A lot of detail has now been lost, and the image would no make a good print. 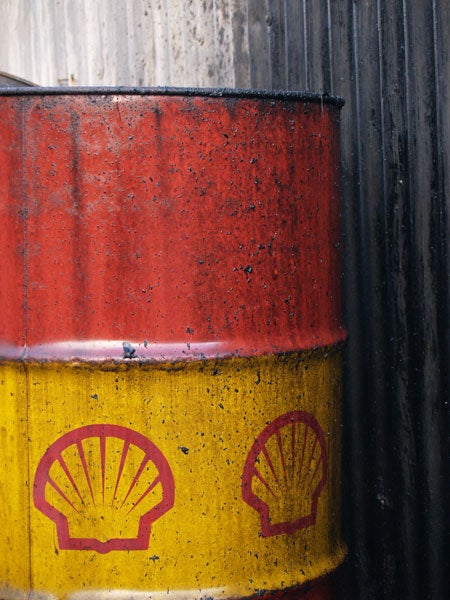 The huge range of colour and white balance settings on the E-500 mean that you can capture just as much colour and detail as you want. 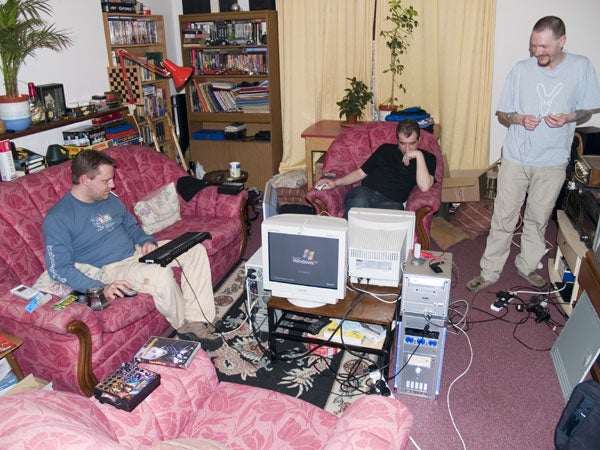 The built-in, pop-up flash on the E-500 is nice and powerful, and is easily enough to fully illuminate a large room. Frame coverage and colour fidelity are excellent. 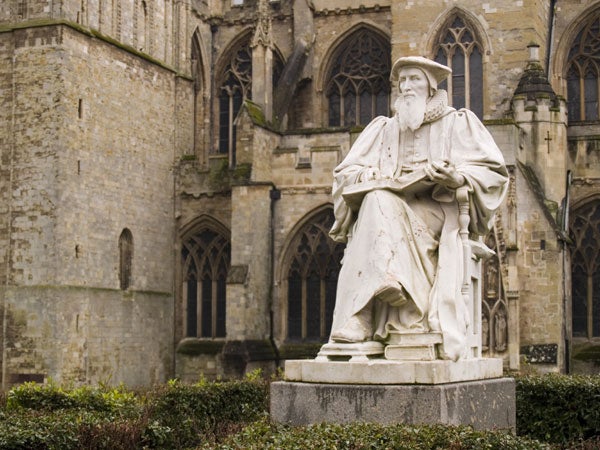 The three-position AF point gives some off-centre focusing ability, but it would have been nice to see a more versatile system, in keeping with the rest of the camera. 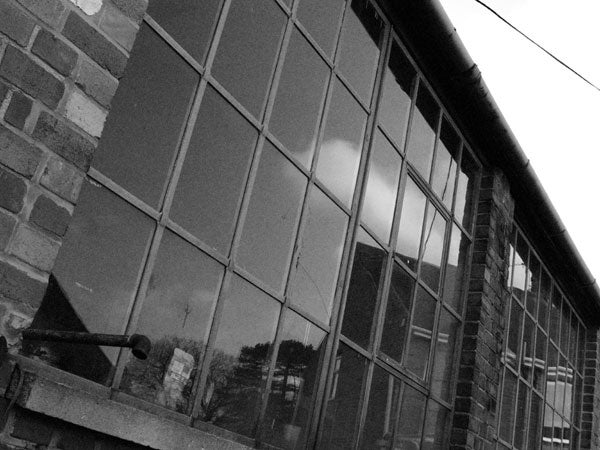 Art students will love this camera. You can take moody black and white shots of old windows that look just like they’ve been shot on push-processed HP5, then printed out in a college darkroom. 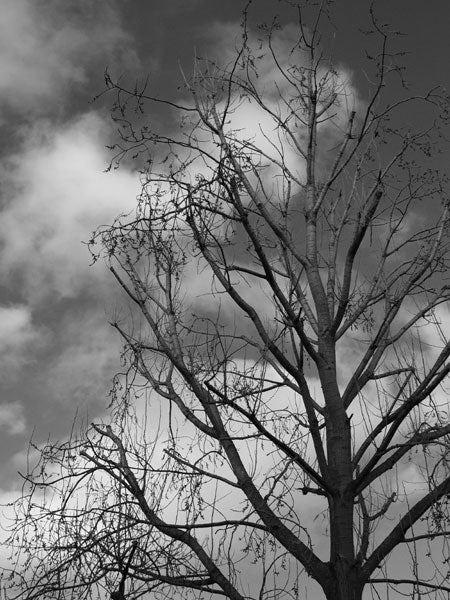 The built-in red filter in monochrome mode means you can get good contrast between clouds and blue sky. 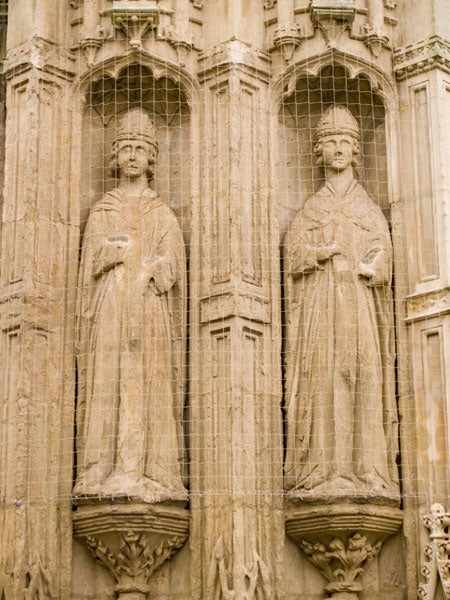 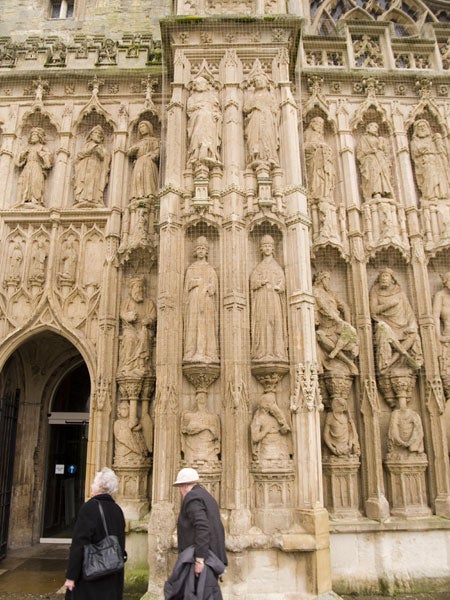 …while from the same spot the wide end of the range looks like this. That’s Exeter Cathedral, in case you were wondering.