I don’t know what you folks out there in readerland have been doing to your cameras lately, but there seems to be a trend at the moment for making cameras that are able to withstand the kind of heavy-duty treatment previously reserved for Land Rovers and very expensive wristwatches.


First we had Pentax with its range of waterproof but stylish compacts, the Optio WP, WPi and W10. Then Ricoh got in on the act with the industrial-looking Caplio 400G, which is water resistant and has a rubberised body to resist damage. Now Olympus has decided it wants to play rough too, and has hurled the rugged µ (mju) 720SW at an unsuspecting market. 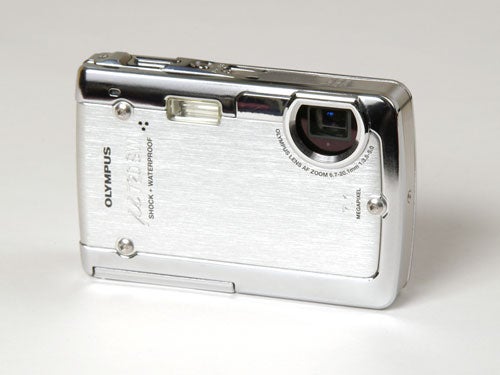 Of course all of the previous cameras in the Olympus mju range have been water resistant, which has made them very popular with that section of the travelling public whose idea of a refreshing summer break is lugging a dayglo rucksack through the jungles of South-east Asia. They can be used in the rain or in the spray of ocean waves, or washed under a tap if they get dirty.


However the new 720SW raises the stakes somewhat. It is fully waterproof to a depth of three metres, conforming to “IEC Standard publication 529 IPX8”, and is also shock proof “according to Olympus test methods”.


In case you were wondering, “IEC 529 IPX8” simply means that it can be used continuously while immersed in water. It turns out that there are several competing international standards for just how waterproof something is. For example the Pentax W10 conforms to “JIS class 8”, which means it’s good for 30 minutes at a depth of 1.5m. The Ricoh 400G is compliant with “JIS class 7”, so it’s OK in the rain or being rinsed under a tap, but should not be used while swimming. 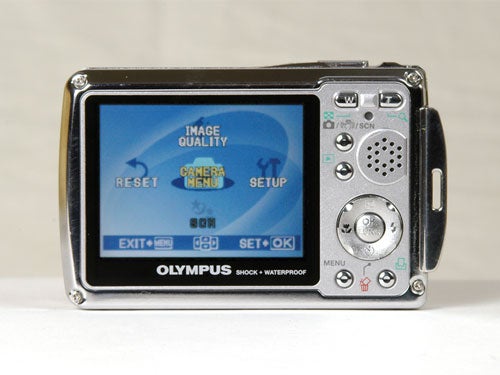 As for the “Olympus test methods” for shock-proofing, I have been unable to find out exactly what these methods are. The press release claims that it can survive being dropped from a height of 1.5m, but doesn’t state onto what kind of surface. So I decided to test it myself.


I hope nobody from Olympus is reading this, because I took the brand-new £230 camera that the company had entrusted to my care and deliberately dropped it several times from head height onto a variety of different surfaces, including carpet, lino and a hard wooden floor. I stopped short of concrete because I didn’t want to mark the case, but I’m happy (and relieved) to report that it survived the ordeal apparently unscathed.

I’m glad that it did, because the 720SW is a very handsome camera and it would have been a shame to break it. It looks a lot more rugged than the previous models in the mju range. I don’t want to sound sexist, but even though it is available in pink and pale blue, it looks very masculine. It has lots of exposed bolt heads and functional-looking panels, and is finished in a combination of brushed steel and chrome. If it was available in matt olive green it would look like a piece of military hardware. I suspect that most of this is purely for decoration, and that the camera would be just as tough if it had the smooth curves of the mju 500, but I have to admit that it looks good. 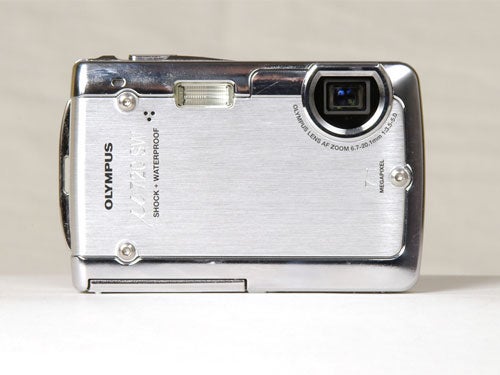 In keeping with its tough exterior, the controls are smoothed off and partly recessed, which makes them a bit fiddly to operate. Considering that skiers and snowboarders are part of the 720SW’s target audience, it’s worth noting that it’s impossible to operate the camera while wearing gloves.


The camera’s performance is mostly adequate, but with a few problems. It starts up in about 1.5 seconds, and in high-speed continuous mode it can fire off 12 shots in just under five seconds before it needs to pause for a couple of seconds to purge the image buffer, although in this mode it is limited to 2,048 x 1,536 (3MP). At full resolution (3,072 x 2,304) and maximum quality it can manage just three shots in three seconds before pausing. A 128MB xD-Picture card is enough to store 36 shots, although it also has 19MB of internal memory, enough for another five frames. 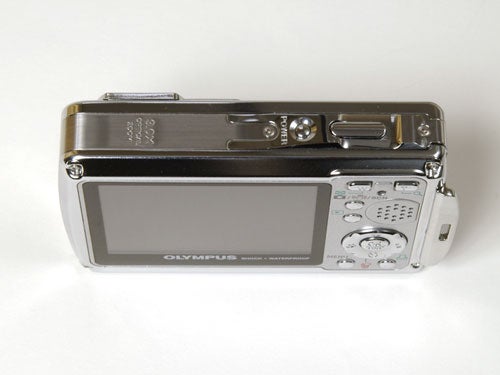 The 2.5in LCD monitor is nice and bright, although it is also very reflective and hard to see in bright sunlight. With a resolution of 115,000 pixels it is of no more than average sharpness.


One major disappointment is the movie mode. The de facto standard these days is 640 x 480 and 30fps, but the 720SW can only manage 15fps, so your holiday movies are going to look very jerky.

My most serious reservations however concern the camera’s battery duration. It is powered by a relatively puny 740mAh lithium ion cell. On a full charge I was only able to take around 100 pictures over a three day period, mostly without the flash, before the battery ran out. For a product that is aimed mainly at travellers and holidaymakers this is a serious flaw. 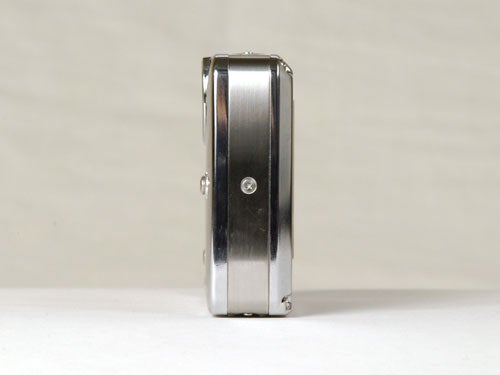 The mju 720SW sports yet another new menu system, the third that I’ve seen from Olympus in as many years. Sadly like all the previous ones it still isn’t any good, and I found the camera to be slow and difficult to operate, despite its apparent simplicity. It has only a program or auto mode, movie mode and a selection of 24 scene modes, however these have a separate button and cannot be activated directly from the menu. Why not? Anyway many of them are superfluous. Do you really need a separate scene mode for shooting eBay auction shots, or one for photographing through glass? Is the Landscape mode significantly different from the Landscape & Portrait mode? How does Portrait mode differ from Self-portrait mode? If one mode does exactly the same as another, it will merely confuse the user to have more than necessary. The separate function menu only adds to the confusion, and the “anti-shake” function merely increases the ISO setting. 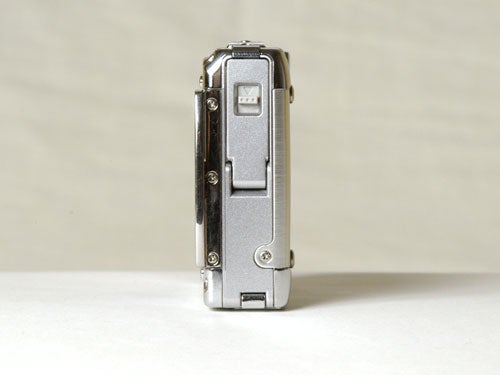 I also found image quality to be lower than I had expected, especially considering the excellent results I’ve had from previous mju series cameras. The lens is slower than on previous models, and is distinctly soft toward the edges of the frame, especially at the wide angle setting where there is also appreciable barrel distortion. Images look over-processed, and even in bright sunlight and at ISO 100 there is visible noise and colour speckling, although oddly high ISO performance is comparatively good.


Shooting in HQ (high quality) mode, there are visible compression artefacts, not surprising considering that the recorded files are only 1.5MB in size – very small for a 7MP image. All in all, a big disappointment.


Despite its tough-guy credentials and the excellent reputation of its predecessors, the mju 720SW is a rather disappointing camera. Limited battery life, poor image quality and a confusing control system spoil what could have been the perfect travel and adventure camera.

Note: These ISO test shots were taken indoors using diffuse natural daylight, automatic exposure and white balance. 10 points to the first person to correctly identify all five lenses. Hint: They’re not all from the same system. 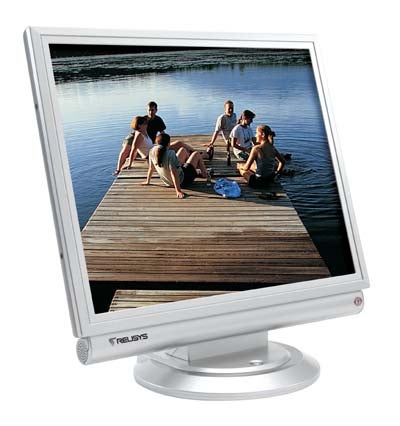 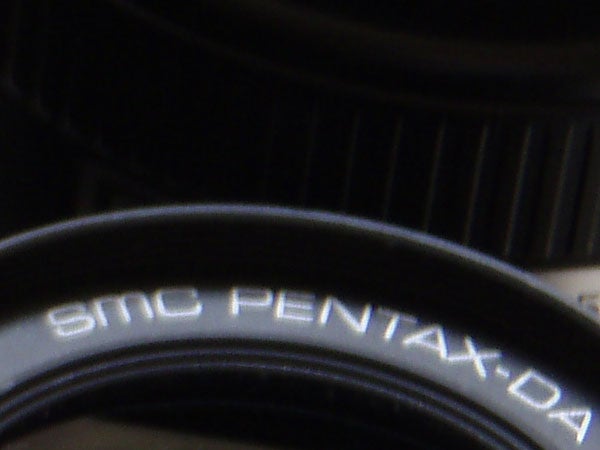 The low-speed 64 ISO mode provides the best image quality, with virtually no visible noise, and good contrast and detail. Compression artefacts are still visible though, despite this being SHQ mode. 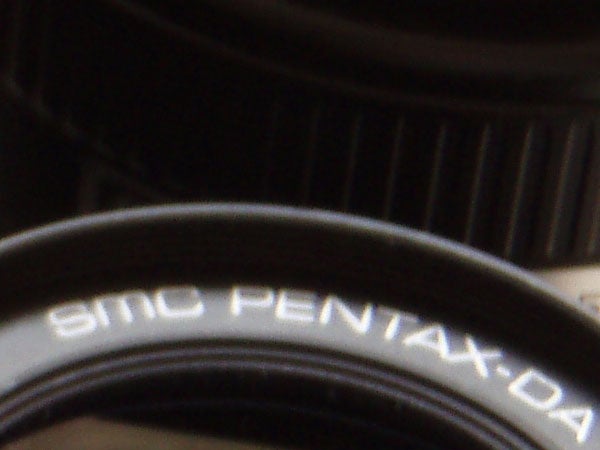 Oddly the metering system chooses exactly the same exposure at 100 ISO. As a result the image is slightly over exposed. Already at this setting there is some slight colour specking in the mid-tone areas. 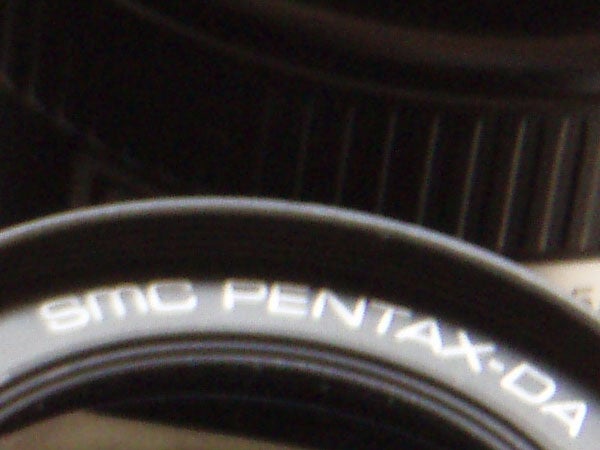 At 200 ISO the colour noise is spreading into the darker areas, and some fine details are beginning to vanish into the haze. 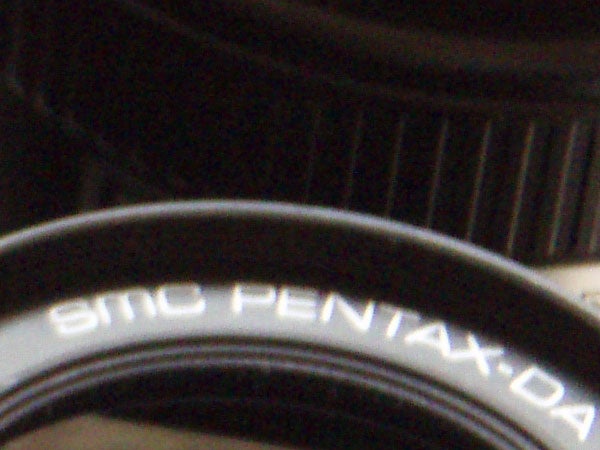 Increasing to 400 ISO, the colour noise has spread into the lighter areas of the image as well. 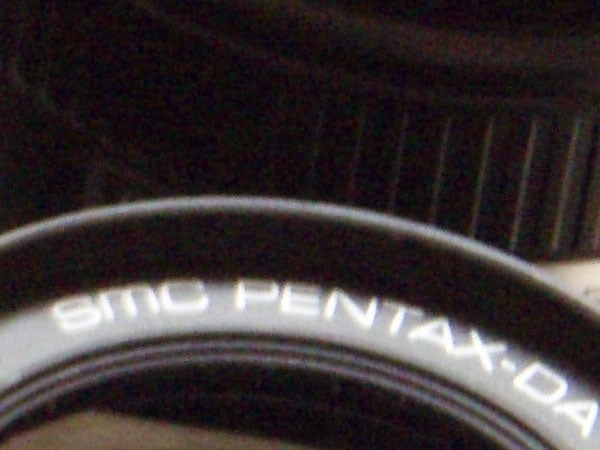 This isn’t actually much worse overall than the ISO 400 shot, although it is still very noisy. 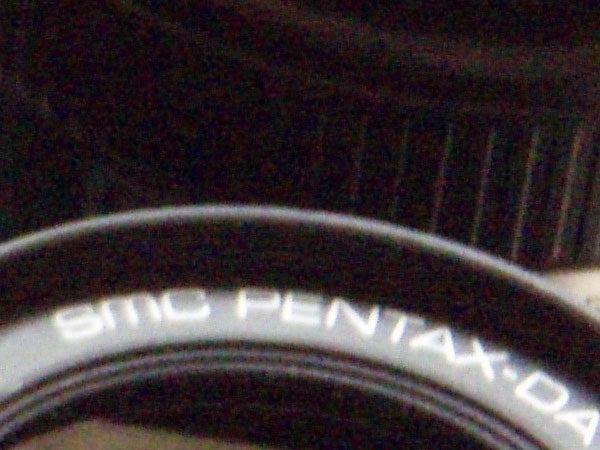 At the highest normal ISO setting there is a lot of image noise, but there are many cameras that are worse at this speed. 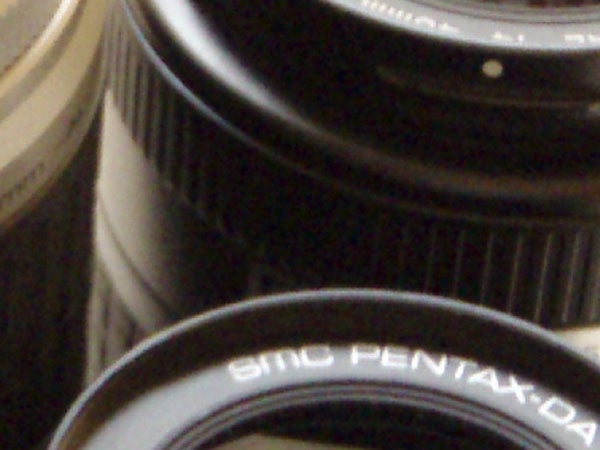 In Available Light mode the image size is restricted to 3MP, but shoots at (allegedly) 2500 ISO. The image isn’t much more noisy than at 1600 ISO, but is it worth it for a measly 1/100th sec gain in shutter speed? 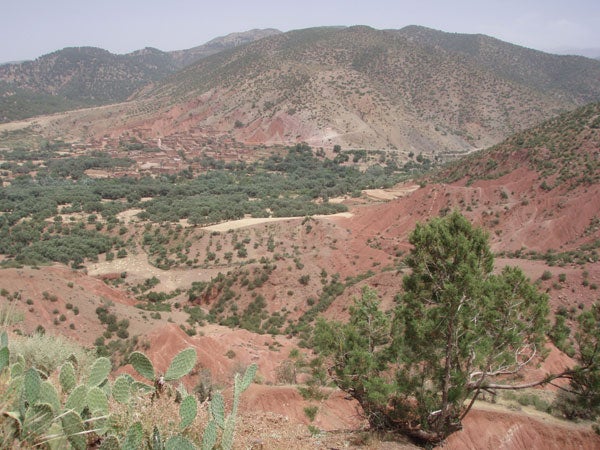 The wide end of the zoom range is equivalent to 38mm which is below average for a 3x zoom camera, and is quite blurry at the corners of the frame. In HQ mode compression artefacts rob the image of a lot of fine detail. 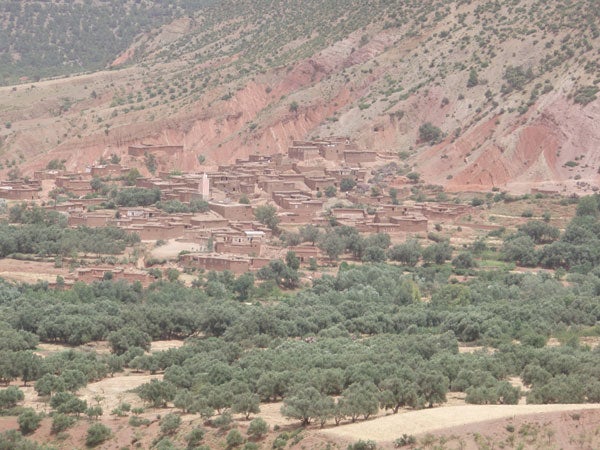 The long end if the zoom is equivalent to 114mm. For a laugh compare this shot to the similar image from my Sony Alpha DSLR review. 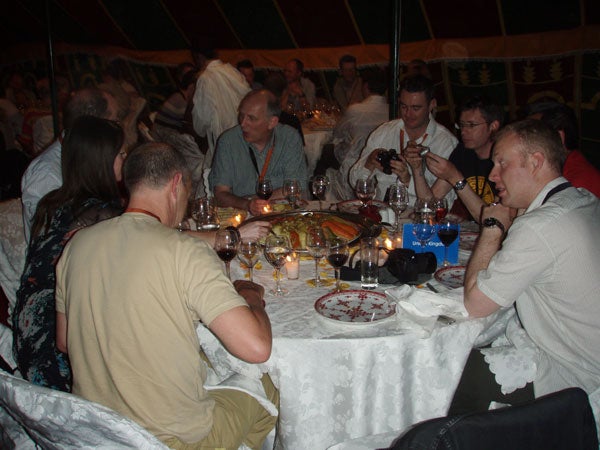 This is what happens when you invite a bunch of camera journalists to dinner. When the main course arrives, instead of eating it they take photos of it. 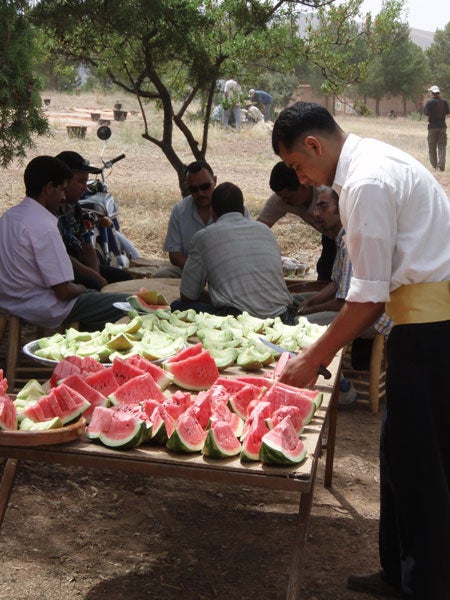 Colour rendition is slightly muted, the highlights are burned out and the black areas lack any kind of detail. The watermelon on the other hand was delicious. 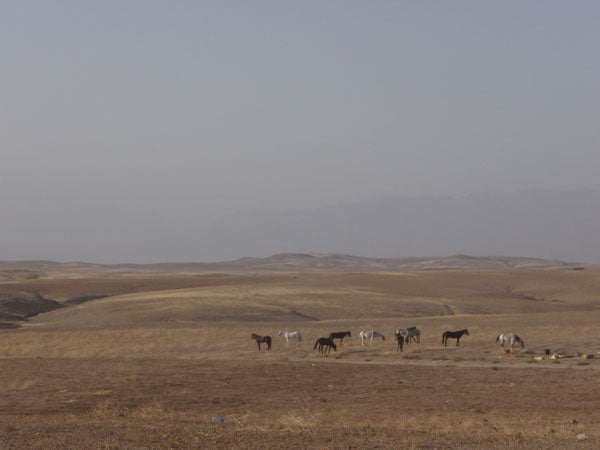 That horse on the far right has no name. 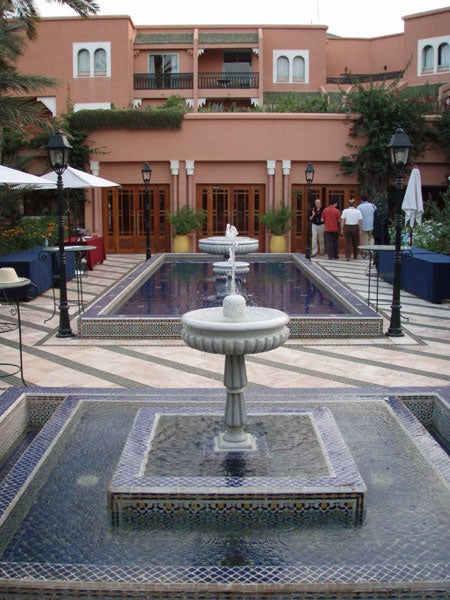 This wide-angle shot shows significant barrel distortion. Auto ISO has selected 200, and there is visible colour noise in the mid-tones. 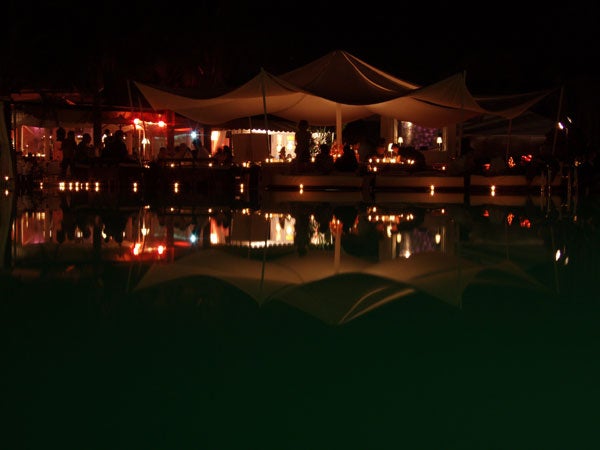 This shot was taken with the camera sitting in the water with just the lens above the surface. There aren’t many cameras that can do that.