OlliOlli is a 2D skateboarding game made exclusively for the PS Vita although it was originally destined to launch on the iPhone. That was until Sony stepped in and convinced British-based developers Roll7 to bring it to the Sony handheld instead. In hindsight, it was the right thing to do because without the physical controls, OlliOlli simply wouldn’t be the frustratingly addictive game that it turned out to be. 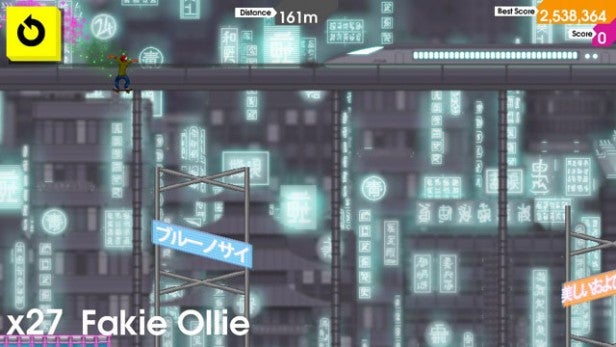 The hand-drawn pixel-style graphics may well look
like they have been yanked off a game from the 90s, but it’s the well executed control system, abundance of game modes and wide variety of tricks that will keep you coming
back no matter how many times you stack it down a flight of stairs.

You will launch spectacularly off your board numerous times there is no doubting about that, so it’s worth taking time to master the controls. The left analogue stick and X action button are the two main things to worry about. Double tapping X helps you gain momentum and more importantly makes sure you land back on your board which is the difference between a ‘Sick’ move and a ‘Sketchy’ one. If you don’t get the timing just right, you’ll lose points or worse, crash out sending you back to the beginning of the level.

The left analogue stick is your means of leaping off the ground and along with the shoulder buttons can be combined to pull of more complex moves. There’s definitely a learning curve and it’s worth delving into the quick tutorial before you begin grinding down stair rails. All of the 120 tricks available in the game can be found in the ‘tricktionary’ which can be accessed at any time through the pause menu. 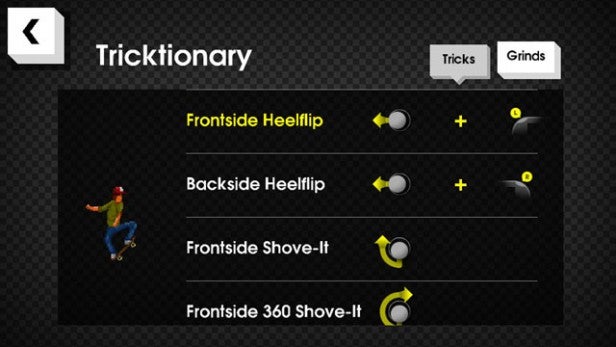 Jumping into the main career mode, there’s five different stages split into a series of levels each containing a set of five different challenges to progress. challenges can range from pulling off a specific combo or racking up a certain amount of points. There’s plenty to get in your way or be used to your advantage, so while levels are relatively bite-sized, getting to the end with all the challenges completed takes some time. There’s both amateur and pro levels, the latter of which can be unlocked when you complete enough challenges in the amateur mode.

Additionally, there’s Spots mode (again unlocked in Career mode) where you can pull off massive combos and become ‘King of the Spot’. Sucessfully clearing every trick and complete every one of the 250 challenges, gets you to RAD mode and for some it could take some time getting there.

There’s online support to post scores up for all events in a leaderboard and a daily grind challenge that’s only open for 24 hours giving you one chance to rack up a huge score. 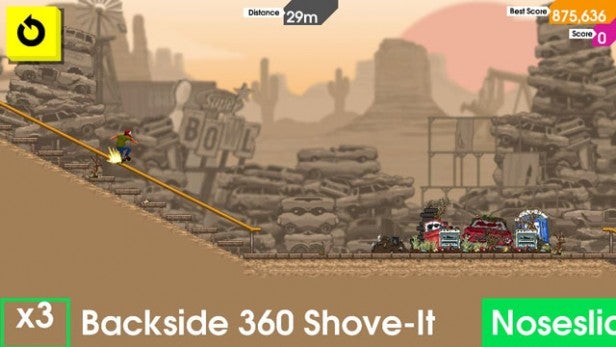 When you get started, be prepared to spectacularly stack it as you get to grips with the precise nature of the controls. When you do pull off an awesome move
it’s gives you the kind of satisfaction to make up for all the times you’ve failed.

Trying to perform the more ambitious moves and remembering to hit the X button afterwards is not the easiest thing to do, so it’s sometimes easy to miss them in glorious flight. Maybe a slow-mo mode or the ability to record moves would be a nice addition here.

By putting the emphasis on the great gameplay mechanics and the variety of modes, OlliOlli is a frustratingly addictive game that you will want to dip in and out of. It looks and feels like an iOS game, but we can only imagine what it would have been like trying to play it with touchscreen controls.

As some users have already mentioned, we did some suffer some minor crashes but Roll7 is in the process of addressing this with a downloadable patch. The £7.99 price does sound steep for what is essentially a mobile game, though PlayStation Plus members can get it for a marginally cheaper £6.39.

Whatever you pay for it, it’s going to be money well spent. Sony has uncovered another indie game gem and it’s likely not to be its last.