Olivetti used to make a complete range of laser printers and was one of the first to release a consumer ink-jet printer back in the early 1980s. It’s now reinvented some of its ink-jet machines and one of the most intriguing is the MY_WAY photo printer.


The company can always be relied on for a new take on design and the MY_WAY printer is unlike any other photo printer we’ve seen. Styled as a black rectangular block, you click down both of the side panels to reveal a slot for the paper cartridge, memory card slots and a PictBridge socket on the left side, while on the right there’s an output slot and access to the print cartridge.


On top is a column of eight buttons and to the left of these there’s a 48mm LCD display, with a four-way selector button below and a blue, strip LED showing Bluetooth connectivity. The back face of the printer, which becomes its top when you pick it up to carry it, provides sockets for a black in-line power supply and a USB 2.0 port, the primary way of connecting the printer. There’s also a rubber carrying handle that pulls up to make it convenient for transport.


The black plastic paper cartridge can take up to 20 sheets of 15 x 10cm photo paper and clips into the left side of the printer. It would be good to see a pack of paper included; supplying just five sample sheets seems a bit stingy. 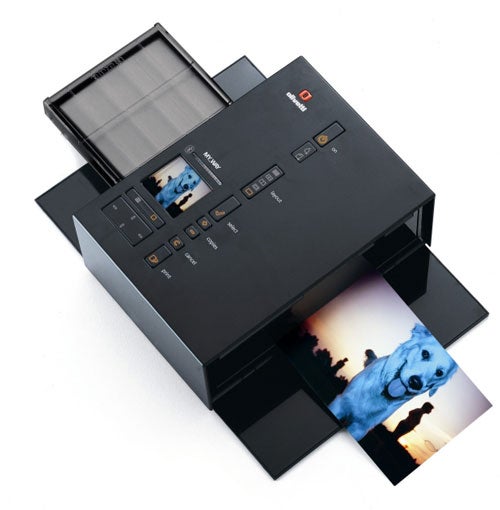 The three-colour ink cartridge clips into the right, behind a secondary door and is a bit fiddly to locate. The memory card slots are also a bit awkward, mainly because they’re black holes in a black panel and don’t show up that well.


Rather bizarrely, you can also print to A4 paper, cut in half lengthwise. Olivetti even provides a letter opener for cutting it neatly. It’s hard to think of a use for this, other than trendy, vertical compliment slips.


Installation depends on the way you intend to use the printer, but is simply either way. Run the CD and both driver and application software are installed. There’s a copy of Corel’s Paint Shop Photo Album 5, which is a good photo management application, with some useful automated fixes, such as fill-in flash and red-eye removal.

When we printed from a camera connected directly to the printer’s PictBridge port it took 2:48 and from an SD card this rose again to 2:53. All these prints were in ‘high’ (best) mode, so we tried one in ‘speed’ mode, to see if this would make the difference, but that completed in 1:29 and was horribly banded. To complete the set, a print in ‘normal’ mode took 1:57.


Print quality, in best mode, is fair, but most colours look over-saturated by default. This can be corrected for in Paint Shop Photo Album, but not if you’re printing directly from cards or camera.


Using the printer on its own, by plugging a memory card or PictBridge-compatible camera, illuminates more of the control buttons. There’s no menu system to speak of, but you do have good control over the images you print and the number of copies of each. This autonomy is extended as you can fit six NiMH batteries for mobile operation, and by the fact that the paper cartridge clips conveniently to the underside of the printer. 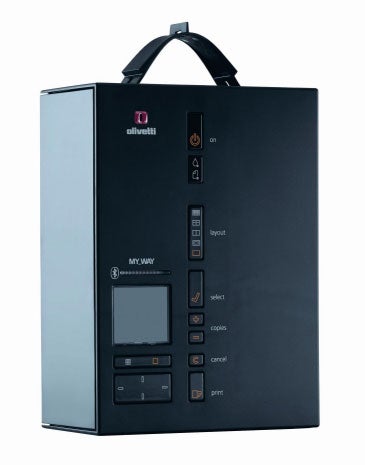 Try as we might, we couldn’t get the device to work via Bluetooth. Our PC saw the printer and would link with it, but then claimed the MY_WAY didn’t provide a printer service.


There are two consumables: the ink cartridge and the photo paper. The cartridge costs a fairly hefty £23, even from Argos, which was the cheapest source we could find. Paper is normally £9.99 for 50 sheets, but the retailer is currently offering a two for one deal, which cuts its cost in half. At normal price, you’re paying 41p per print, but with the BOGOF deal, which finishes on 20/6/06, this drops to 30p. Even this, though, is a high price for a 15 x 10cm print, when most competitors have it down to little over 20p.


The MY_WAY is a solidly made, unconventionally styled (and named) photo printer at a very good price. It’s easy to use, but it’s not without a couple of shortcomings, particularly its speed and print costs. If you can pay more than the £60 asked here, for an alternative printer, you will gain in the long term, at a rate of around 10p per print.