If you need to laser print in colour on paper bigger than A4, you’re looking at big money, but not necessarily a big printer. OKI’s new C8600n A3 printer is no miniature and weighs in at 40kg, so is definitely a two-person lift, but it’s considerably smaller than most of its major competitors.


Its size is partly due to OKI’s print technology, which is based on high-definition LED strip illumination, rather than a laser beam. The machine uses an in-line colour engine, which doesn’t require the focusing and deflection mechanisms needed by laser printers. It also means that colour prints come through virtually as quick as black ones.


The C8600n has a conventional design, except that everything’s super-sized. The 300 sheet paper tray at its base takes sheets up to A3, but can also be loaded with A4 in landscape orientation. A second tray of the same capacity is available as an option, as is a duplex unit for double-sided printing. Above the main paper tray is a multipurpose tray, which can take another 100 sheets of plain paper or be used for special media, and at the top of the front panel is a neat, uncomplicated control panel. 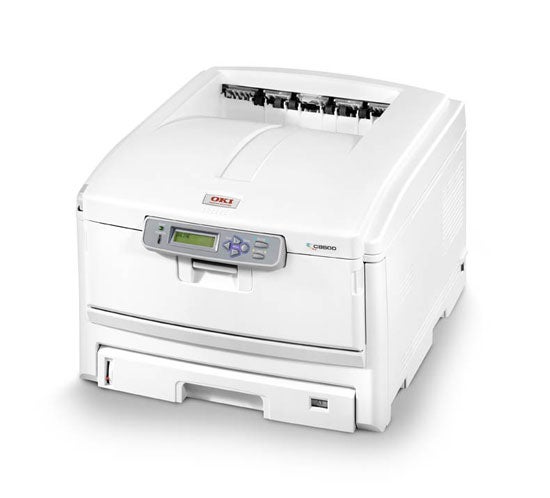 It sports a backlit, two-line by 16-character display and simple controls to navigate the menu. Paper feeds out to the top surface of the printer in a conventional manner and at the back are USB and Ethernet sockets; both connections are standard on the machine.


Installation is quite involved and isn’t helped by a setup guide which doesn’t offer enough detail and is printed much too small. You have to take out each of the electro-photographic (EP) cartridges and remove a protective film from their undersides as well as large orange blanking plates from their tops, before replacing them and clipping a toner cartridge into each and locking them in place.


Unusually, the driver CD doesn’t include a setup utility, but relies on Windows to recognise the new hardware and to search for the necessary drivers on the supplied CD. The driver is a sophisticated affair, and includes functions to print banners, posters, multiple pages per sheet and watermarks.


It’s also supposed to come with a utility suite offering useful templates for labels, business cards and CD/DVDs, a network monitor facility and print control for administrators to track printer usage. We couldn’t find any of these on the supplied CD, but imagine this was an oversight on the review system.

OKI claims 26ppm for A4 colour print and 32ppm when printing in mono. Increase the paper size to A3 and the corresponding figures are 15ppm and 17ppm. Our five page, A4 test piece took 27 seconds, giving a real-world print speed of 11ppm, around a third of the quoted speed. Colour A4 prints, impressively, took no longer, but still managed less than half the specified speed. A five page, A3 test took 36 seconds, giving a speed of 8.3ppm. While the speeds themselves are quite reasonable for a colour laser, it’s a shame printer makers have to exaggerate quite so much.


The quality of prints from the C8600n is very good. Both black and colour output has a slight sheen to it, which not everybody likes, but there’s virtually no spatter and very precisely formed characters in text prints. Block graphics are also clear, with good solid colours and very good registration of black text over coloured backgrounds. 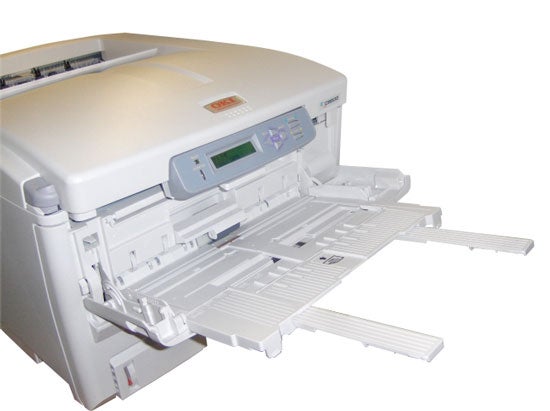 Our test photo image also came out well, though here some of the finer detail was lost, as was detail in shadowed areas of the image. Colour variation in areas such as sky is competently handled and the dither patterns used in the 600 x 1200dpi print are very unobtrusive.


Although the overall noise level is around 54dBA, the type of noise, from its several fans, can be quite throbbing. The fans stop when it slips into sleep mode, though.


In addition to the costs of the EP cartridges and their corresponding toner, you have to consider the fuser unit and the transfer belt when working out consumable costs. Although the minimum life of the least long-lived component is a healthy 6,000, A4 pages at 5 per cent cover, you do have to keep track of all their different usage rates. 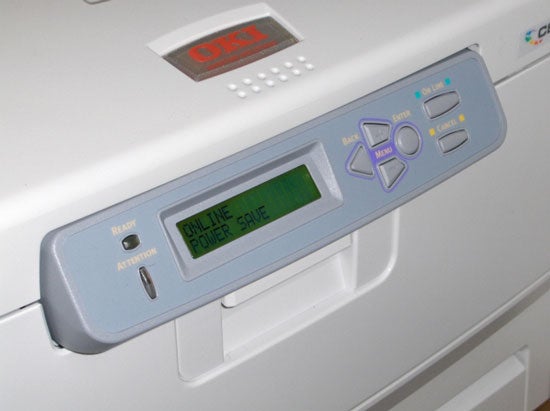 When you work out the costs, you get a five per cent black page coming out at 1.62p, with a 20 per cent colour page costing 8.68p. This puts the printer at the low cost end on black printing and in the middle of the range for colour. Obviously, if you print mainly A3 pages, your page costs will be higher.


This versatile A3 printer’s main claim to fame is its comparatively small size – it’s not much bigger than some earlier generations of A4 lasers. Its print quality is very good and print speeds, while not up to OKI’s claims, are reasonable. You still have to decide whether you need A3 prints enough to spend £1,400, though.