OKI’s unique claim to fame is that its laser printers don’t use lasers. Back in the days when people thought a laser printer burnt an image into the paper with a James Bond killer ray, the company had the really clever idea of using a strip of high-intensity LEDs instead of a laser beam to create a page impression on a printer’s photoconductor drum. It’s never looked back and in the economically named C810n, it has produced an A3+ colour printer based on the technology. 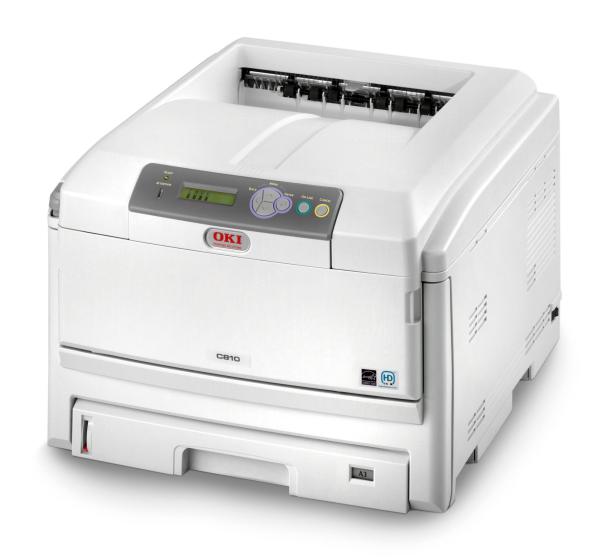 Is it just us, or do all OKI laser printers look vaguely similar? Sure, this one is bigger than most of the others, though the company makes great play of how its smaller than most A3 colour lasers and we wouldn’t argue. However, it has the same rounded looks and idiosyncratic 1990s design as most of the models that have come out of the company in the last few years.


The design is conventional enough, though the in-line arrangement of the four, colour drum and toner units means the machine is quite deep. There’s a 250-sheet paper tray at the bottom of the front panel and this can take paper sizes from A6 up to A3+ – all you need do is adjust the paper size readout in the front edge of the tray when loading them. There’s also a 100-sheet multipurpose tray, which flips down and folds out from the machine’s front panel.

The control panel is remarkably simple, with a 2-line by 16-character, backlit LCD display, a four-way navigation cluster and simple buttons for online and job cancel. Two indicators for Ready and Attention (error conditions) complete the array.


The drum units come pre-installed, but with large orange blanks fitted to them, which have to be removed, along with spacer sheets, before you can start printing. Plug-in all four toner cartridges and the machine is set up to go. Its software installs from the provided DVD, but suffers from the same unclear set of instructions as the recently tested B410d. Unusually, you use the Windows installation wizard to complete the process.

OKI rates the C810n at 32ppm for black print and 30ppm for colour and under test we saw around three quarters of the quoted speed on black print. Our five-page, black, A4 text test took 23 seconds to complete, which is equivalent to a print speed of 13ppm, but when we ran the larger, 20-page job, the speed rose to 24.5ppm.


The five-page text and colour graphics print produced a speed of 13.6ppm, less than half the rated figure, while the A3 text and text and graphics equivalents gave speeds of 9.4ppm and 7.1ppm, respectively.


One reason behind the comparatively slow speed of short run jobs is that the machine spends up to 30 seconds ‘Adjusting temp’ or, as we in the trade call it, ‘warming up’. There are plenty of laser printer designs that require very little warming up and it’s hard to see why LED printers shouldn’t do the same – it’s the fuser that has to warm up and that’s much the same, no matter what method is used to create the page image. 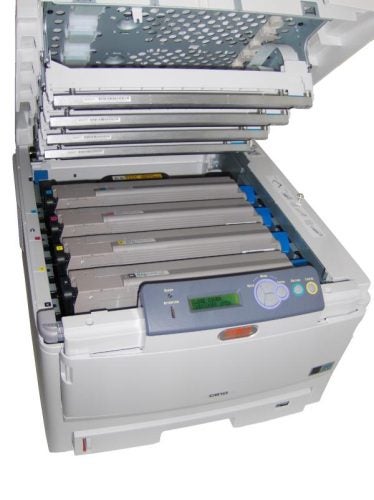 Prints themselves are generally very good quality. Black text is sharp and well formed, with no signs of jagged edges or toner spatter. Colour graphics are bright and even and the registration of black text over colour is near-perfect. Just the kind of results you want for attention-grabbing colour documents.


Photo reproduction, at the machine’s maximum 2,400dpi effective resolution, is smooth, though not quite as sharp in foreground detail as some others we’ve seen. Shadow detail is largely lost to black, so this isn’t the best colour laser we’ve seen at reproducing photo images. Printing a full A3 colour page is quick and the image looks effective, with improved detail in darker areas.


Keeping the C810n running requires a number of different consumables, all of which have different service lives. Toner itself should last 8,000 pages, while the drum units, one for each of the printer’s four colours, are rated at 20,000 pages. Next on the list is the transfer belt, designed to print 80,000 pages and finally there’s the fuser, which should last 100,000 pages. This last item might not need changing during the life of the printer.


A4 page costs come out at 2.05p for black print and 6.69p for colour. Neither of these costs is high and although the printer itself doesn’t cheap, you should be able to claim something back on the TCO, even if you use the machine heavily.


This is a fine A3+ page printer, which is easy to use, produces good text and business graphics quickly, and doesn’t cost the earth to run. If you have occasional or regular use for A3+ print in a workgroup or small department, the C810n would be a good choice to supply it.