OKI is the only ‘laser’ printer maker which doesn’t let a laser beam near any of its photoconducting drums. Instead it uses a bar of high-intensity LEDs to alter the charge on the drum and define the printed image. This is a much simpler and less bulky system than the lights and mirrors of a laser engine and OKI has at last taken advantage of this in the design of its new C3450n.


Although the company has never had much of an eye for industrial design, the C3450n has a slightly more up-to-date look than earlier colour lasers in its range. Decked out in grey and cream, it’s one of the smallest colour ‘laser’ printers we’ve seen. It’s designed as an in-line device, with four drum and toner cartridges and four LED strips, ranged from front to back under the top cover.


Paper feeds from a single 250-sheet tray at the base, ending up on the printer’s top surface. Because of the deep design of the machine there’s plenty of room for A4 pages along its top. There’s a single-sheet, multi-purpose tray for special media and envelopes, which folds down from the front. 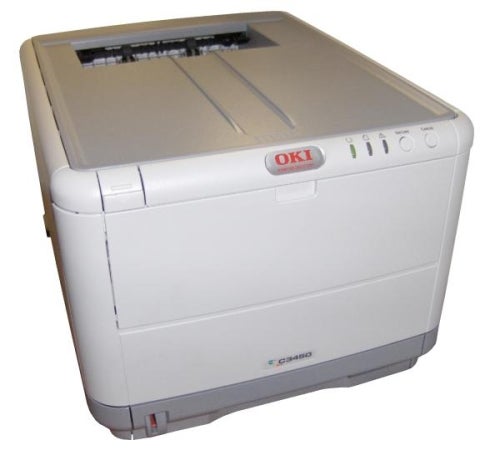 Controls and indicators are minimal, with three colour LEDs for power/data, paper jam and assorted errors, and two buttons to turn the machine on and off line and to cancel a current job.


There are sockets for both USB 2 and Ethernet networking at the back of the machine, as both are standard on this model.


Flip up the top cover, which holds the four LED strips and you have quick and easy access to the four combined drum and toner cartridges, with a fuser unit slotting in behind. Below the four drums is a transfer belt and all six items are consumables, so there’s quite a bit to install. Initial setup requires you to remove each drum and pull off a film cover, as well as removing a spacer from the fuser unit.


There’s not much in the way of supporting software with the C3450n, just a driver and a status monitor, but there’s a colour swatch utility, which can print a range of shades so you can compare printed output with that on your screen and adjust your screen accordingly. The software doesn’t take care of this, though, simply providing the swatches you’ll need for the comparison.

OKI is keen to champion its 16ppm colour print, which is certainly fast for a £200 colour printer. In fact, though, our text and colour graphics test took 35 seconds to finish it five pages, giving a real-world print speed of 8.6ppm, just over half the rated speed. OKI’s 20ppm black print came down to 13ppm, too, using our standard, five-page black text print. Neither of these speeds is at all bad for a machine of this type, but again you should take the manufacturer’s specs under advisement.


A 15 by 10cm photo print took 19 seconds and getting three complete photos printed in under a minute shows the difference between colour ‘lasers’ and their inkjet siblings. Even at this speed, though, photo images lack the subtlety of an equivalent inkjet. Colours are bold and overstated, with shadow detail coming out near black. 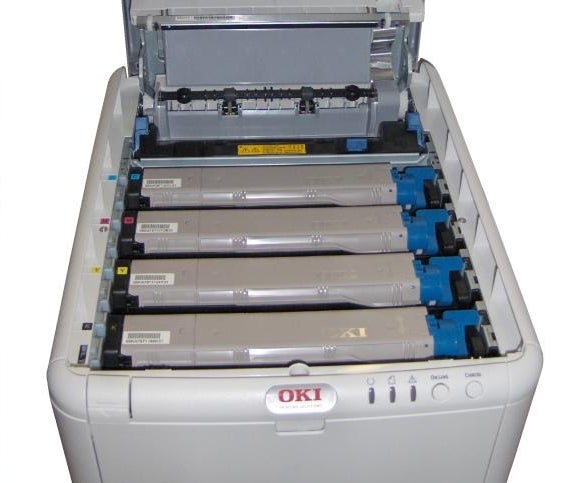 Things are much better with business graphics, where the same brightness and colour solidity is a positive advantage and the coloured text in our text and graphics test is particularly vivid and eye-catching. Black text on coloured backgrounds is aided by the fact that there’s very little banding in areas of coloured tint. Black text itself is crisp and characters are very well formed.


All text and graphics has a slight gloss sheen, which some people may not like, but we find quite professional-looking.


As mentioned, the C3450n has a variety of consumables, all with different service lives. Each drum is good for 15,000 pages, but you’ll have to add several toner cartridges during that time, as each one has a capacity of 1,500 pages for standard yield, or 2,500 pages for high yield. 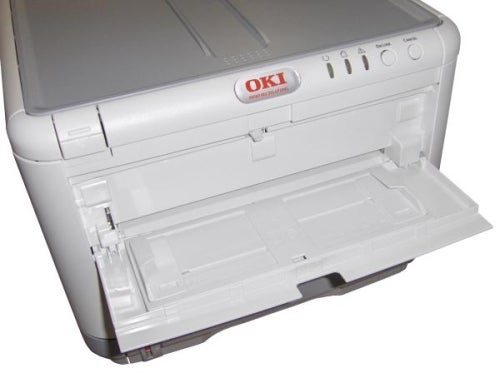 Additionally, the fuser and transfer belt have lives of 50,000 pages each, though with a colour laser this may extend beyond the service life of the printer. Working out the costs of all these components gives a cost per page of 2.9p for black text and 10.5p for colour. Both these figures are at the higher end of costs for a colour laser printer.


OKI’s C3450n is a neatly designed, compact colour laser printer, which is quite quick and produces good quality text and business graphics. While its photo printing is not as good as some other colour ‘lasers’, this is not the main reason for most people to buy one. Running costs are a little on the high side, but may improve as more suppliers compete to stock the machine’s consumables.