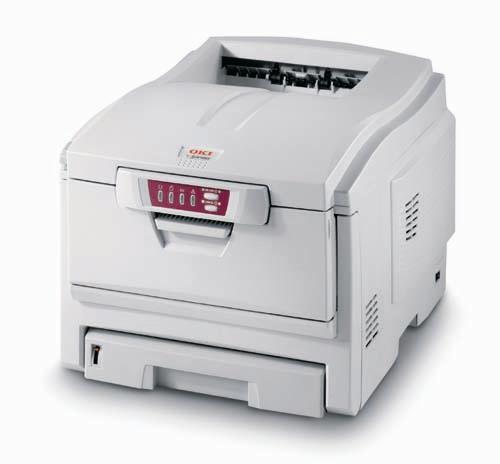 Colour laser printing used to be the realm of large businesses, where the substantial purchase price of the unit could be spread among many people in a large department. Set-up costs have fallen dramatically in the last couple of years though, and this OKI C3100 full-colour LED printer costs less than £350 on the street.


Despite its modest price, this is a substantial printer, designed to give full-colour, LED printing for an individual or small workgroup. Its in-line design gives it the look of a mono A4 printer in width and height, though with a substantially increased depth – you’ll need an executive-sized desk or a printer stand for this one.


There are two basic designs of colour laser printer; in-line and carousel. Most entry-level colour lasers use the carousel technique, as it’s more compact, but it’s also slower to print. The in-line design used here is considerably faster, but the result is a bigger machine.


It effectively takes a mono laser and repeats most of the mechanism internally another three times, for the three primary colours. Instead of having a cylindrical photo-sensitive drum to transfer a monochrome page image to the paper, a full-colour version uses a photo-sensitive belt and lays down each of four colours one on top of the other to build up the image, before transferring it to paper in a single pass. This technique can be up to four times faster than a carousel.


The C3100 has a conventional paper path, with paper feeding from a 300-sheet tray under the machine through an S-shaped path to exit onto its top cover. An alternative multi-purpose tray, which can hold up to 100 sheets, folds down and telescopes out at the front. This can be used for thicker paper, to just over 200gm2.


A third route, offering a straight-through paper path, takes paper from the multi-purpose tray and feeds it to a face-up tray at the back of the printer. Using this technique, you can print banners up to 1.2m long – equivalent to roughly four A4 sheets end-to-end.


There are only two buttons on the printer’s simple control panel, to turn it on and off line and to cancel a print job. Four LEDs indicate power state, paper out, toner low and paper jams. At the back, a single USB 2 port provides a PC connection; but there’s no networking option.


Setting up the C3100 involves opening the hinged top cover, fitting the transfer belt and fuser unit and slotting in drum units and toner cartridges for each colour. This is all straightforward stuff, as is installing the software driver. The driver offers quite detailed control of print and can add a watermark, as well as handling multi-page per sheet prints.

From our benchmarks, the C3100’s first page out is not that quick, suggesting that the rasteriser in the printer is slow to convert a page ready for printing. Once the conversion is complete, though, the page-on-page speed is quicker, though as usual, not as fast as the manufacturer claims.


This is because most manufacturers quote draft print speeds, which we’re not convinced are used much in small businesses, and don’t include the time taken by the software driver to prepare pages for printing. OKI quotes a mono print speed of 20 pages per minute, with 12ppm for colour. We produced our five page black text document in 31 seconds, giving a page rate of just under half the quoted figure.


Our mixed text and graphics document, in full-colour, took 23 seconds to print or just under 3ppm. Although these results appear lower than the manufacturer’s quotes, in relative terms they’re quite quick for a colour laser printer in this price bracket.


Black print quality is good, with text crisp and clean, with none of the spread associated with even high-quality, colour, business inkjets. Areas of solid colour in business graphics are not completely even though, and we noted mis-registration with black text over colour. Fortunately, there’s an option in the driver for true black overprint, but you have to remember to set it.


There’s a slight gloss sheen to both colour and black print which some people may not like, but it improves the look of photo-elements in prints. Photographs reproduce reasonably for a laser, with good detail but uneven fills and gradations of colour.


There are four different consumables that have to be factored into the cost of running the C3100. From the £26 toner cartridges, through the £68 image drums and £81 fuser to the £93 transfer belt, they all have different service lives, too.


When you work it all out, a 5 percent black page costs 1.8p, which is a good figure, even for a mono laser. A 20 percent colour page is 5.2p, again not at all bad. So, despite its low asking price, you don’t pay for it in over-expensive consumables.


This is an economical entry-level colour laser which would suit a small business like an estate agent or car mart, somewhere needing colour, but with photographic content ‘for illustration only’.