We see a lot of printers in the course of a year, so occasionally get the feeling we’ve seen a particular model before. It sometimes means we’ve inadvertently requested the same model twice, which is annoying if we’ve started a second review, but it can also mean the model is rebadged from another manufacturer.


OKI’s B6250 produced this déjà vu feeling, but no, we hadn’t asked to review it before. We checked other printer makers and came across the Epson EPL-N3000, which looks suspiciously similar to the B6250, but we haven’t reviewed that, yet. Then we came across the Konica Minolta PagePro 4650EN, which we reviewed a couple of months back and again looks suspiciously similar, physically and on the spec sheet, to the OKI. 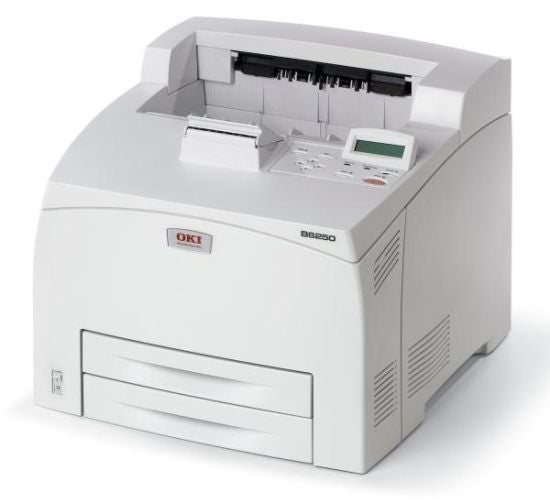 So we have one machine being sold in at least three different guises. Our guess as to the manufacturer of all three is Epson, as the company sells an A3 printer with similar styling to the EPL-N3000, which the other two ranges don’t include.


OKI has to bring something to the party to make the B6250 preferable to the Epson or Konica Minolta offerings and we suspect that’s price. The cheapest we can find the OKI machine for is £303, while the PagePro is £461 and the Epson is £486, all including VAT.


The OKI B6250, like the other two, is a big machine, with some subtle curves relieving an otherwise boxy appearance. Paper feeds from either of two, 200-sheet paper trays to a deep indentation in its top surface, so you can expect the printer to cope with long print jobs unattended.


The control panel is well laid out, though the 2-line, 16-character LCD is another one that is hard to view and badly needs a backlight. Why printer makers are so reluctant to use a couple of white LEDs to provide backlights on printer displays is beyond us. They cost pence to include and fractions of pence to run, given the printer is taking over 550W, anyway, when printing.


This printer doesn’t have networking built in – odd for a machine aimed at the workgroup – though it’s available as an option, as are one or two extra 550-sheet paper trays, a duplexer, hard drives and an offset stacker.


The machine is very easy to set up and maintain, as it uses a single drum and toner cartridges that drops in through a hatch in the printer’s top cover. Close the hatch and you’re covered for 11,000 pages of print. Software installation, which includes both PCL 6 and PostScript Level 3 emulations, is also easily done.

Another interesting difference between the Epson, Konica Minolta and OKI printers is their rated speeds. The first two reckon their printers can touch 34ppm, while OKI is a little more modest, at 30ppm. Our five page text and text and graphics prints only gave the OKI a top speed of 18ppm, but since it’s a workgroup printer, we ran the 20 page test, too, which gave 25ppm. This is because the fixed print preparation time is a smaller proportion of the whole print job on the 20-page test; if we ran a 50-page test, we’d get an even faster time, possibly approaching 30ppm. 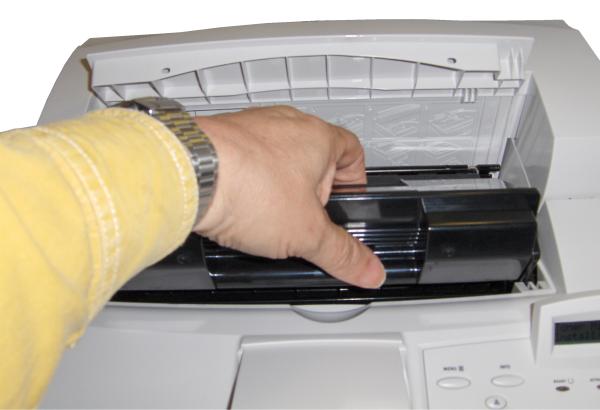 The reason we don’t use longer documents for speed testing is that we don’t believe the majority of print jobs in typical office environments run to that length. Office document length still averages around five pages and most multiple copies are still in the three to five range.


Print quality is very good. Text characters are exceptionally well formed. Even though the printer’s default resolution is 600dpi, you’d be hard pressed to spot a flaw in normal viewing. Greyscale graphics are also well reproduced and the printer doesn’t get easily confused by the translation from colours to greys. There’s little banding and only the faintest hint of blotchiness in some darker tints.


The reproduction isn’t quite as good when printing photo images at the top, 1,200dpi resolution. While the varying tint in areas of sky is well handled, there’s some apparent banding. Given that photos are only a small part of the print mix a typical office laser will see, the print quality is well above average, overall. 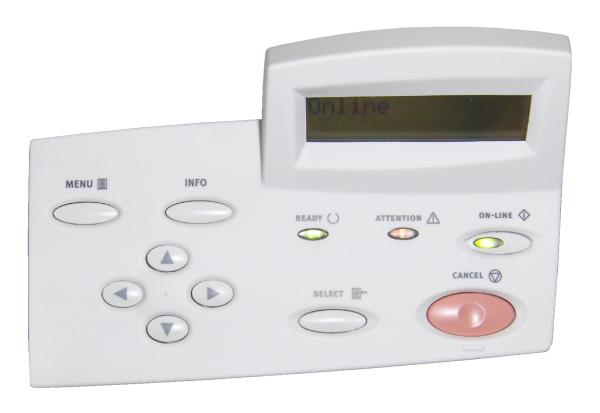 The 11,000 page drum and toner cartridge is the only quoted consumable in this printer, so even in a busy office, you won’t be replacing it that regularly. OKI Online sells it for £116, giving a page cost of 1.88p, a bit on the high side and around 0.1p higher per page than the Konica Minolta PagePro 4650EN cost. OKI doesn’t quote the fuser as a consumable, either, where KM does, but since it has a life of 200,000 pages, we think it’s reasonable to consider it a lifetime component.


It’s hard to justify the price difference between the OKI B6250 and the equivalent models sold by the other two suppliers. The others have networking built in, but OKI sells the B6250n, which includes Ethernet and sells at £371, still around 25 per cent cheaper than its rivals. The OKI printer costs 0.1p per page more to run than the Konica Minolta, by our calculations, so that may sway you if your printer will be very heavily used.