Fast mono laser printers are still the stalwarts of most offices and OKI has revamped its mid-range offerings with new LED engines and built-in duplex print. In the process, they’ve updated the styling and improved the looks.


In a cream and light-grey case, the B431dn is neat and unobtrusive, as a good printer should be. The deep-set indentation in its top cover shows that it’s designed to cope with relatively high workloads, where higher-capacity output trays are a necessity. 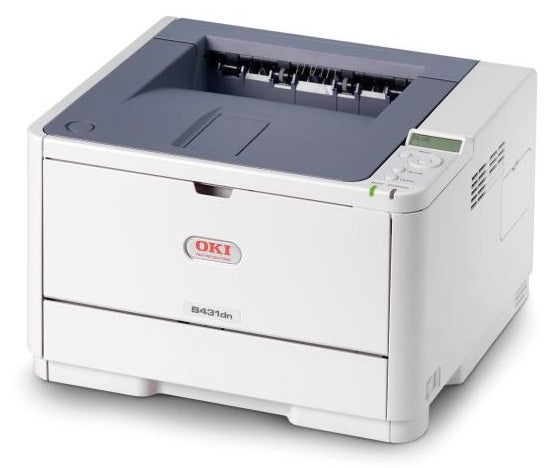 This capacity is matched by a 250-sheet input tray and a flip down 100-sheet multi-purpose tray for letterheads or envelopes. An additional tray, with a healthy 530-sheet capacity, is available as an option, to sit underneath the printer.


The control panel, which OKI points out is the same as on their new range of colour printers, thus making it easy to move from one model to the other, has a simple, four-way control disc for menu operations and two buttons for Online and Cancel. Indicator LEDs are mounted in the printer’s front page to show Ready and Attention conditions. 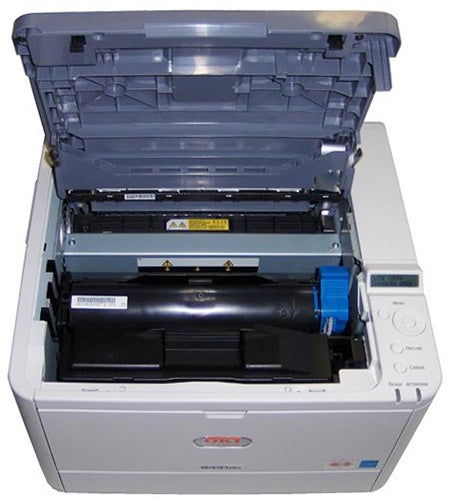 There’s a 2-line by 16-character LCD display, which would be a bonus if you could read it. As it is, without a backlight, with the display angled at around 45-degrees, and with a reflective acrylic face, it’s very hard to see what it says. A couple of white LEDs would be all that was necessary for a backlight, so hardly a major cost burden.


The B431dn comes as standard with USB, Ethernet and legacy parallel connections and the whole machine is easy to set up. There’s a two-part drum and toner cartridge, where the toner cartridge clips into the drum that carries it. The whole assembly dropped into place from the top, taking literally seconds to change.


Drivers are provided for Windows and OS X and are available for various Linux distributions. It’s also compatible with a wide variety of network protocols.

OKI claims a top print speed of 38ppm for this machine, which is one of its selling points. As we include processing time in our measurements, the speeds we see are usually quite a bit lower, and our 20-page print clocked up just 25.5ppm. This is still a healthy print speed, but when we printed in draft mode, which in OKI’s case is really just a toner save mode, we still didn’t get close to 38ppm.


This printer offers duplex print as standard and feeds paper very efficiently, with each completed page followed immediately by the first side of the next. We measured it at 17.1 sides per minute, making it possible to set the machine to duplex by default, without wasting a lot of time waiting for jobs.

A 15 x 10cm photo print on an A4 sheet took an impressively short 15 seconds at the printer’s top resolution and just 10 seconds printed at its default 600dpi. With most printers spending most of their lives asleep waiting for the next job, the wake-up times are important and this machine takes 20 seconds to heat its fuser up, which will add significantly to intermittent print times.


Print quality from the newly-engineered engine is extremely good. Text is sharp and clean, looking almost like traditional print. Even with toner-save switched on, it’s still very readable, though a little light and grey.


Greyscale graphics are smooth, with very little blotchiness or banding. The only slight problem is a reduced range of grey shades, meaning that some colours in an original can be represented by very similar greys. 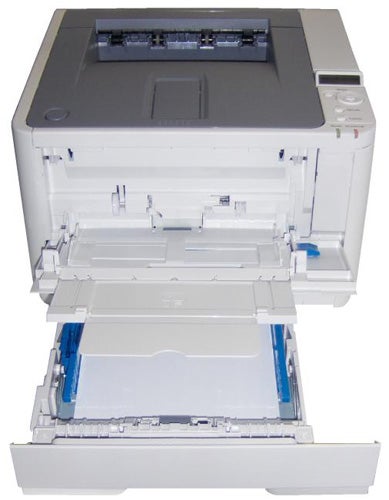 Photo reproduction, normally a bugbear with mono lasers, is very good, with lots of foreground detail and enough in the difficult, darker shadowed areas to still see what’s going on. Although there are some differences between the default 600dpi resolution and the top level, true 1,200dpi, both are good and show virtually no banding.


This printer can handle a wider than normal range of paper sizes and you can load paper from A6 all the way up to a 1.2m banner. Useful at one end for ID cards and at the other for ‘Well done on the sponsored Bat Watch’ placards.


The toner cartridge is available in two capacities: 3,000 and 10,000 pages and the drum should need replacing only every 25,000 pages. Using the best prices we could find on the Internet gives a cost per page of 2.3p, including 0.7p for paper.


This is better than most of the mono laser printers and all-in-ones we’ve reviewed recently, though we have seen machines, like the Samsung ML-3471ND, which have a cost per page of under two pence.


This is a well-conceived, mid-range, laser-equivalent printer that uses OKI’s mature LED print technology to great effect. The new LED engine is quick and produces quality print of text, graphics and even photographic documents. Running costs are better than most and the only quibble we have is with the LED display. It could do with one of OKI’s high-intensity LEDs as a backlight.