OKI has a smaller presence in the UK than some of the big names in office printing, but makes a good range of mono and colour laser printers and multi-functions. The C5600n is intended for small workgroups or a small office of half a dozen or so.


This is an in-line colour laser, which means paper is drawn from the 300 sheet paper tray, or 100 sheet multipurpose tray (a bit fiddly to fold out into position) and only makes a single pass through the printer. The image is transferred from a transfer belt, where it has been made up from all four colours in one process. This technique has the advantage of producing faster colour prints, but it does mean the machine has a comparatively large footprint on the desk. Paper exits to the top surface of the C5600n and the output tray is good for jobs of up to 400 sheets.


OKI is the only commercial printer company to use strips of high-resolution LED lights, rather than a laser beam, to define the image on its light-sensitive drums. For all practical purposes, print quality is very little different between the two types of device and the LED mechanism is certainly simpler to implement.

The control panel is well laid out and has the usual array of buttons for navigating its menu system. The two-line LCD panel has a good backlight, so you can read it in most ambient light conditions. At the back are sockets for both USB 2.0 and Ethernet, as this printer comes network-enabled as standard.


Although the consumables in this machine are pre-installed, you have to remove each toner and drum unit in turn to pull off packing tapes and pull out a chock from the transfer belt, which is fiddly.


As well as the printer driver, which is well appointed, there are separate utilities for setting up the colour and for printing web pages, so they fit the width of an A4 sheet. Epson provides a web print utility with its printers, too, but we fail to see why this simple and really useful function isn’t built into Windows. Extra point to OKI.


There’s a 50 second warm-up period, if the printer has been idle for any length of time, during which time the status display shows a rather cute ‘Adjusting Temp’ message, rather than the more accurate ‘Warming Up’. Once warm, prints appear promptly after a few seconds and the machine managed our five-page text document in 22 seconds. This gives it a real-world, black text speed of 13.6ppm, and the colour print speed of 11.5ppm is not much slower. While, as usual, these results don’t bear much resemblance to the quoted speeds of 32ppm and 20ppm, respectively, they’re very reasonable for a printer in this price bracket.

Print has a notable gloss finish, which is a matter of personal taste, but black text looks very clean and well-defined at the printer’s default resolution of 600dpi. Colour graphics, as you might see in a PowerPoint presentation, print well with no noticeable banding and good reproduction of vivid colours.


When it comes to photo prints, you can take the resolution up to 1200dpi by 600dpi and the definition of the images is then pretty good, though with some slight banding apparent in solid areas, like sky. What isn’t so good is the colour rendition, where colours by default are oversaturated. OKI provides a palette tuning utility, however, which can improve things with a bit of tweaking.


There are a lot of different consumables in the C5600n. Toner cartridges for each of the four colours clip on top of their separate image drums. The black toner lasts for 6,000 pages, while the colour ones should go for 2,000. The image drums themselves last for 20,000 pages, then there’s a transfer belt and a fuser unit, each of which should last 60,000 pages. 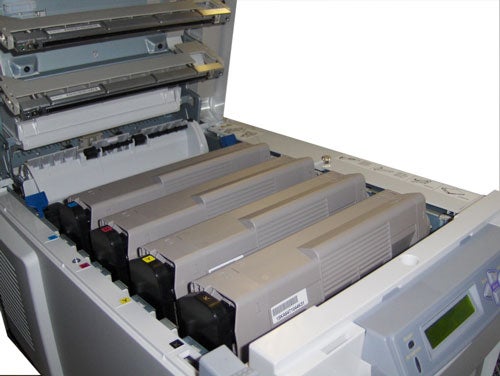 To add to the complexity of working out a page cost, there are a couple of special deals available on consumables, which don’t appear to be time-limited. The rainbow toner pack reduces the cost of the four toners from £227 to £175 when you buy them all at once and the image drums value pack cuts the price of four image drums from £122 to £116. We used the price of these multipacks in calculating the page cost, as this gives the lowest cost, overall.


Surprisingly, we saw a lower 5 per cent black page cost then OKI quotes. We reckon that even with 0.4p for a sheet of paper and VAT on top, a page should cost around 1.5p, when OKI quotes it at 2.2p. Colour costings go the other way, as our calculated figure is 8.5p, while the company quotes 7.04p. Both black and colour figures are good for this class of machine, though you will have to keep an eye on all these different consumables.


This is a good small office or small workgroup colour laser, which gives quality prints quickly – particularly quickly when you look at its colour output. It’s also comparatively cheap to run and is a good choice for general office duties. 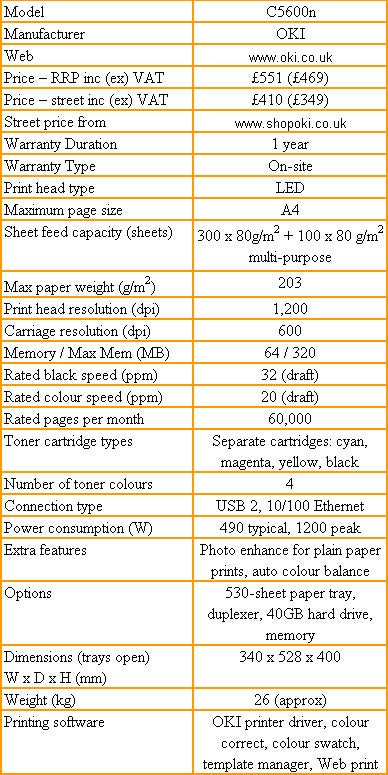 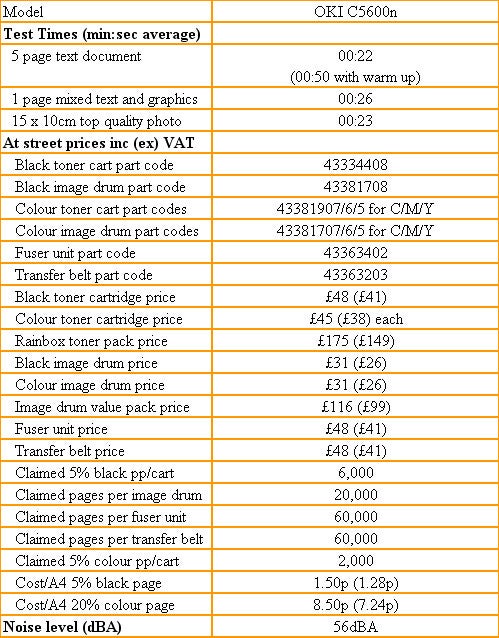