If there were any justice in the world, Okami would have been one of the biggest hits of 2007. Arriving late in the lifespan of the PlayStation 2, this gorgeous, heavily stylised and brilliant action adventure was one of the few games worthy of comparison to an Ico or a Zelda, making the fact that it sold a fraction of the amount that the Simpsons Game or WWE Smackdown vs Raw 2008 did mildly depressing. Luckily, its release on Wii gives the UK buying public a chance to put things right. After all, isn’t it a perfect fit for the Nintendo machine? 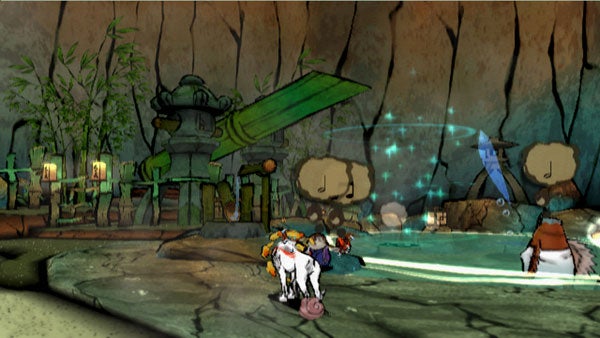 Why? Because this is the game where the brush is mightier than the sword, and being quick on the draw has nothing to do with gunplay. Not only is Okami’s bold visual style based on the brushwork of classical Japanese scroll paintings, but the main tool you’ll be using is what the game calls ‘the celestial brush.’ You play the sun god, Ameratsu, incarnate in the form of a sleek white wolf, and on the trail of a malevolent uberdemon known as Orochi. While Ameratsu has the sort of powers you might expect from a wolf – a decent running speed, some heroic leaps and a nasty set of jaws – he also has the power to wield the aforementioned art tool. At any time you can effectively pause the action and draw specific lines or shapes upon the still image, and these lines and shapes will have the power to slash enemies in half, repair broken watermills, create bombs, summon lily pads or call handy elastic vines into being. You’ll only have a couple of these skills in your repertoire to begin with, but the more the game progresses, the more will be added. In other words, drawing is a huge part of the game. 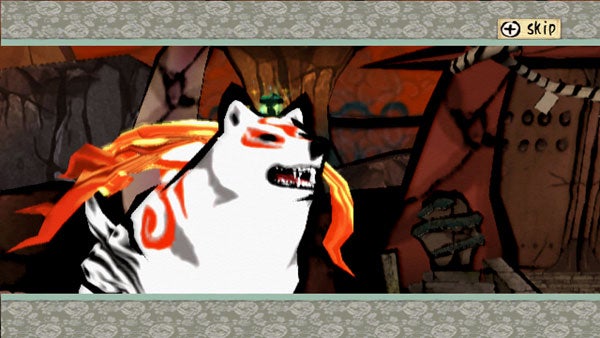 Considering it’s a company best known for taking PS2 properties and making them work on the PSP, Ready at Dawn has done a mostly fantastic job of making Okami work on Wii, sticking tightly to the look and feel of the original, but also fulfilling a wish list of features that most Okami fans would love to see. Clearly, the ability to draw with the remote is a biggie, but Ready at Dawn has gone beyond that. For a start, this is an even more attractive Okami than the original PS2 version. Now running in Widescreen at a full 480p, the lines seem clearer and the colours more vibrant than ever, making the illusion of a moving painting even more breathtaking than ever. Curiously, the paper effect in the background of the original appears to have been toned down, but that’s a small price to pay for such dizzying imagery (even if it’s a bit weird when, in cut-scene videos clearly ripped wholesale from the PS2 version, the full effect makes a sudden reappearance). It’s also worth noting that – finally – you can skip whole sections of cut-scene and dialogue at a press of a button. Anyone who suffered through the drawn-out intro of the original will know what a boon this is.

Unfortunately, the reworked Wii controls bring to mind the phrase that begins ‘be careful what you wish for.’ Moving Ameratsu around is not a problem, but the basic dash and bite combat moves have now been moved from a simple button press to a shake of the remote, while the celestial brush controls aren’t quite as sensibly implemented as we might have hoped for. Jerking the remote to get the standard attack isn’t just tiring; you have to keep your jerks to a certain rhythm, and this might take you an hour or so to get used to. Even later on, in the midst of a fraught boss battle, you’ll find yourself wishing for something as simple and direct as just pressing X. The celestrial brush, however, is nearly, very nearly, a game breaker. For the first ninety minutes or so of play I spent a lot of time wondering what I was doing wrong. I froze the action, tried to trace the perfect shape, and nothing happened. I’d try the quick, straight stroke that brings on Ameratsu’s power slash attack, and fail just about every time. In one particular trial this was infuriating, and I could feel the same veins in my temple throbbing that last had a workout in Ninja Gaiden II. 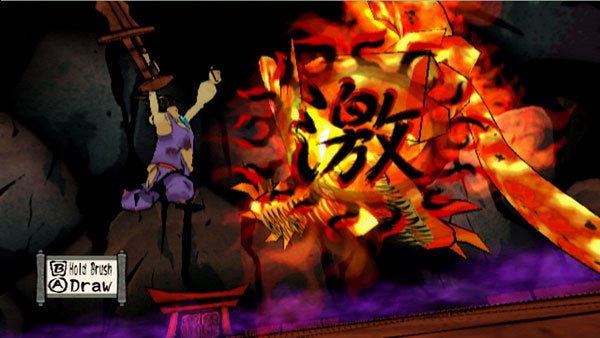 I eventually worked out that a bold, rapid stroke was better than an accurate one, and changed the way I approached the brush. This helped a lot, but the controls are far from intuitive and more than a bit oversensitive. My concern is that this may put off the very people who should really be embracing Okami this time around. After all, there are a lot of Wii owners out there who have grown bored of Wii Fit and finished Mario, and are looking for something else with some meat to pass the time. 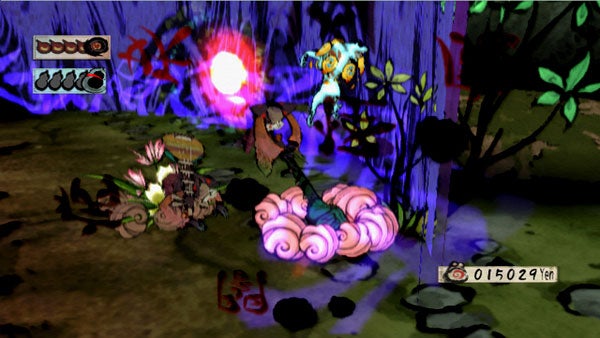 This would be a shame, nay, a tragedy, because once you get used to it the brushwork is reasonably manageable, and the rest of the game is as magical as it ever was. Okami takes itself less seriously than Zelda, and while it misses out on some of the epic narrative drive that made The Twilight Princess so enthralling, it makes up for it in quirky laughs, surprisingly ribald humour and sheer, irresistible charm. Your constant companion, an egomaniacal, worryingly randy bug called Issan, gets the lion’s share of the funny lines, but the drunken, cowardly samurai, Susano, and the peculiar metrosexual warrior Waka, are equally fabulous creations. The game’s mix of epic questing and small scale side quests is similar in balance to Legend of Zelda: The Wind Waker or Ocarina of Time, and every bit as appealing. The whole thing has a brilliant, good times vibe. 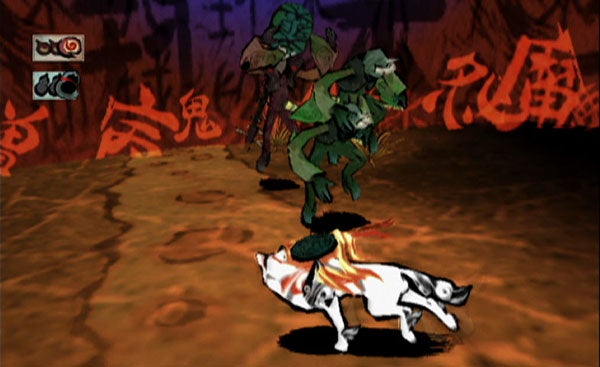 The more you play Okami, the more you grow to love it, and the more you won’t be able to stop. You’ll enter an area to find it covered in an evil smog and patrolled by monkey-like demons, and you’ll find it hard to rest until you’ve cleared away the corruption, filled the gushing streams, bought the cherry blossom back into bloom, fed the little critters knocking around and discovered your next brush technique. While the control issues noted will affect your experience of combat, fighting really isn’t the be all and end all of this game. Gritting your teeth through the odd mass scrap or boss battle is a small price to pay for an adventure of this quality. 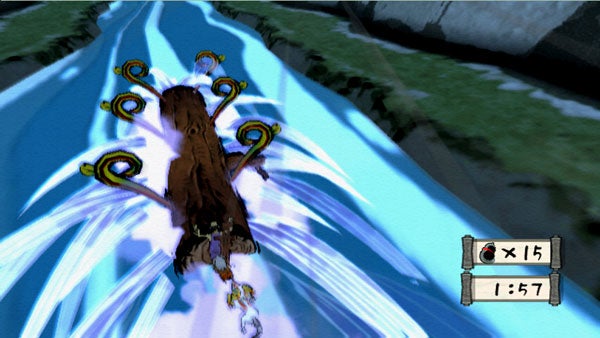 Okami offers you a rich and beautiful world, and a genuinely – how should I put this? – ‘unique’ take on a classic Japanese story. If you played through the PS2 original then I wouldn’t suggest coughing up for the new Wii version (and cheapskates still in possession of the Sony console might note that you can get the earlier version at a bargain basement price). If you haven’t, however, then don’t make the same mistake this time around. Okami Wii might not be all that we wished for, but it’s still one of the strongest long-term titles on the console.


Controlling the brush with the Wii remote isn’t all we hoped for, but otherwise this is a brighter and even more beautiful Okami, and one of the best experiences to be had on Wii.